Extremely powerful, the Netgear Nighthawk RAX200 brings you 12 streams of Wi-Fi 6 spread across three network bands (one 2.4GHz and two 5GHz). This router is easy to set up, highly configurable and produced the best throughput results of any router or mesh system that we’ve tested. Sure, while it’s quite expensive and a mesh system will deliver the best overall range, but if you want an extremely fast router with the best throughputs then look no further.

There’s no other way to adequately describe the Netgear Nighthawk RAX200: it’s a beast of a router. Sitting at the top of the company’s Wi-Fi 6 range, this model is the most expensive, the most feature-packed and the most flexible of its products.

If you’ve got a house with a lot of wireless devices and want the best performance, this is the router for you.

If Netgear was aiming to show how powerful its router was through design, then it nailed it for the RAX200. As with other products in the range, this model looks more like a stealth bomber than a traditional router. 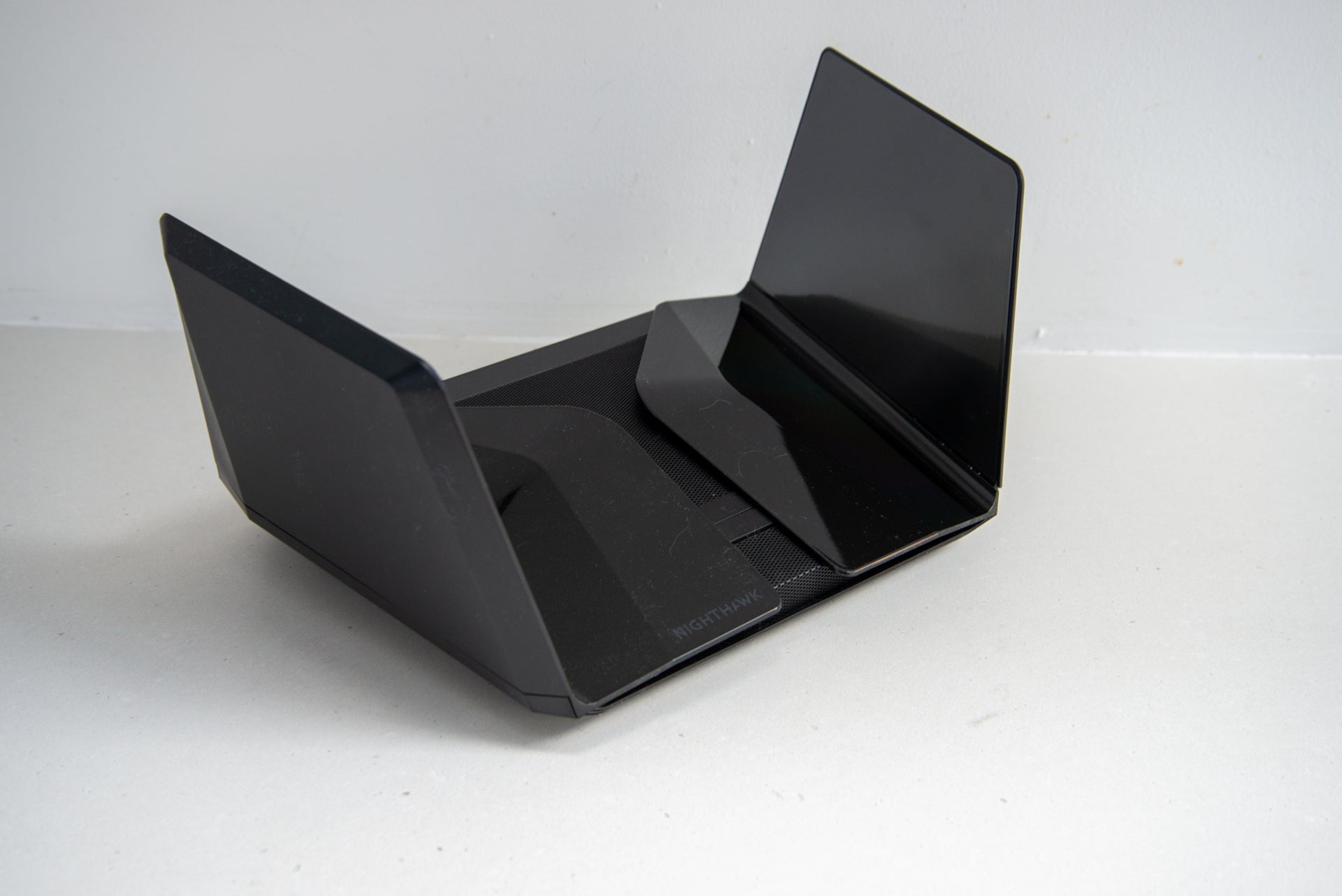 As cool as it looks, the design has its advantages, too. By integrating all of the antennas into the side wings, which simply fold up and click into place, the router looks neater than much of the competition. Plus, you get the advantage that the antennas are locked into their ideal position, so there’s no sitting around trying to get everything sat upright.

As a high-end router, you might expect to find a 2.5G Ethernet WAN port, but on the back there’s just a standard Gigabit Ethernet port. Don’t worry though, as in the software there’s plenty of configuration options. You can aggregate the WAN port with Gigabit Ethernet port one for faster connections, or use the 2.5G port on the rear as the WAN port instead. There’s a huge amount of flexibility here, although the standard Gigabit WAN port should suffice for even the fastest connections today. 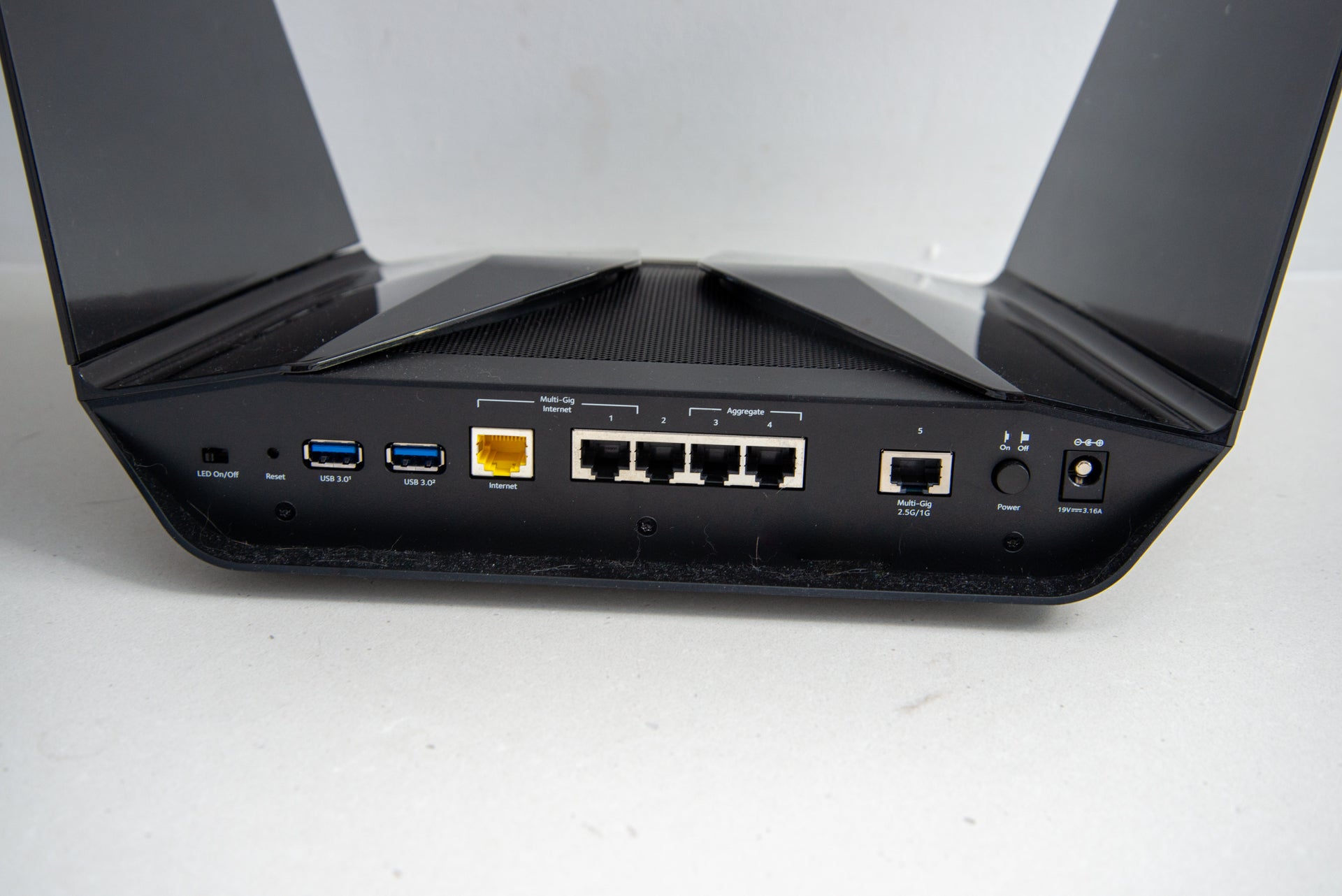 With the standard WAN port used, there are four Gigabit Ethernet ports plus the 2.5G port for wired devices, which should prove sufficient for most people. You also get two USB3 ports on the rear for the fast sharing of storage, if you like to use your router for this kind of thing.

The Netgear Nighthawk RAX200 is set up and configured using the Nighthawk mobile app. It takes you through initial configuration and setting up a secure wireless network. When configuring your wireless network, you have the choice of using the networks separately or combining them using Smart Connect. With the latter, the router chooses which band incoming devices should connect to automatically. 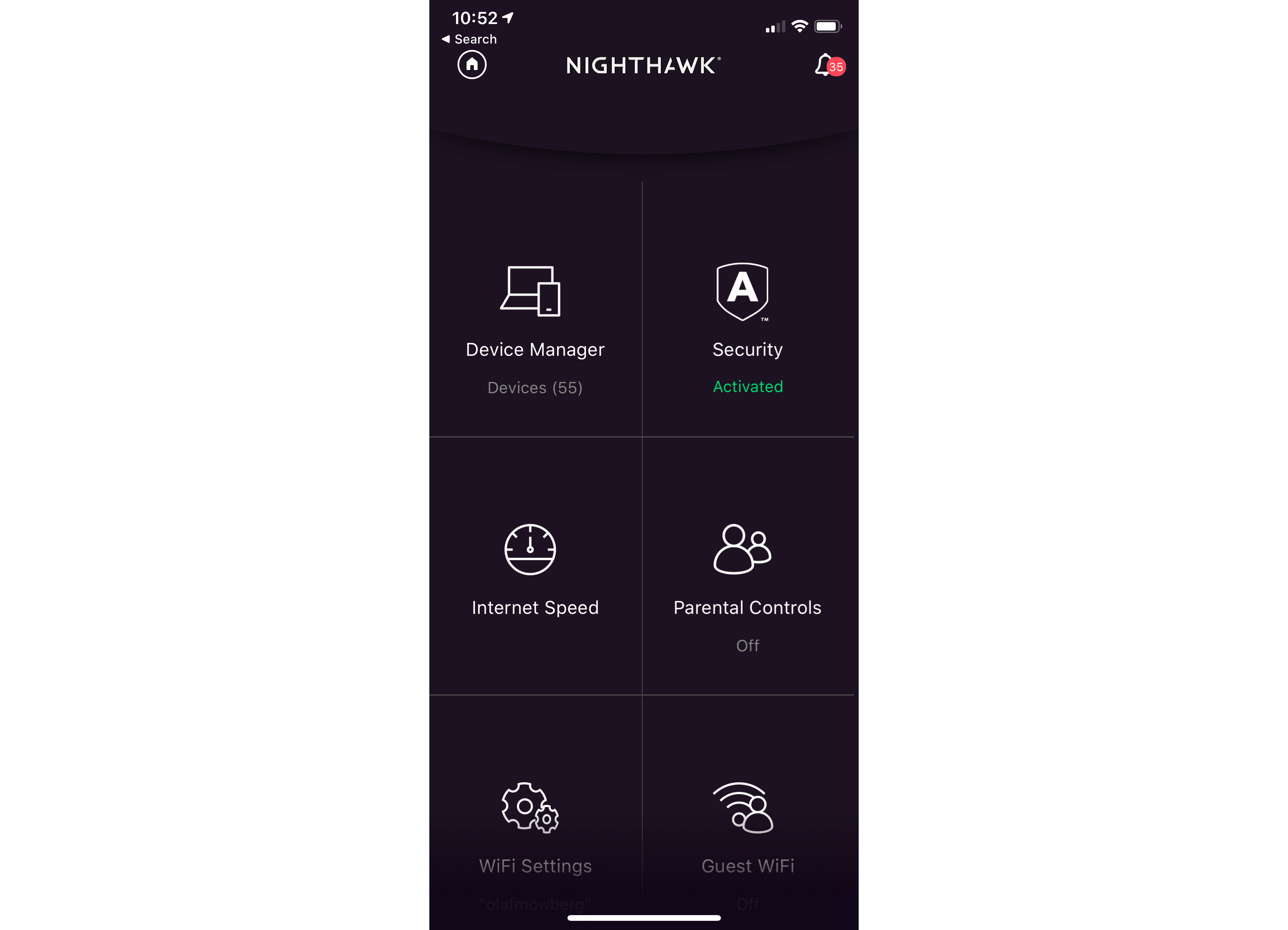 The benefit of doing this is that you don’t have to worry about configuring each device to connect to a different network, but you get less flexibility. One of the advantages of this router is that it’s tri-band, giving you three networks: one 2.4GHz, one 5GHz running on the standard channels and one 5GHz running on the higher channels.

The reason for the discrepancy is that the fastest speeds are achieved using 160MHz channels, which can suffer from interference. You can test pushing the second network to the full 4800Mbps to max out what the router is capable of.

In total, then, you’ve got 12 streams to play with, which is impressive. Although there’s some benefit from extra streams using Wi-Fi 5 devices, you only see it when downloading; when you have Wi-Fi 6 clients, they can each use one or more dedicated streams for uploading and downloading. For multiple devices this is handy, as each can, for example, get one stream of dedicated bandwidth; however, a high-performance device can nab two or more streams to push the maximum throughput.

Via the app, you get basic control over the router, including being able to turn the guest Wi-Fi on and off, and viewing connected devices. You can also reboot the router and, as a nice trick, remote control the router from anywhere in the world.

There are also handy Google Assistant and Amazon Alexa skills so that you can toggle on the Guest network, and find out what your wireless network details are.

This router ships with Netgear Armor, with a month-long free subscription to the security service. Powered by BitDefender, Armor scans your home network, blocks threats and warns you about out-of-date IoT and smart home devices. It works seamlessly in the background but I had one problem: it kept warning me about out-of-date products that weren’t even plugged in. 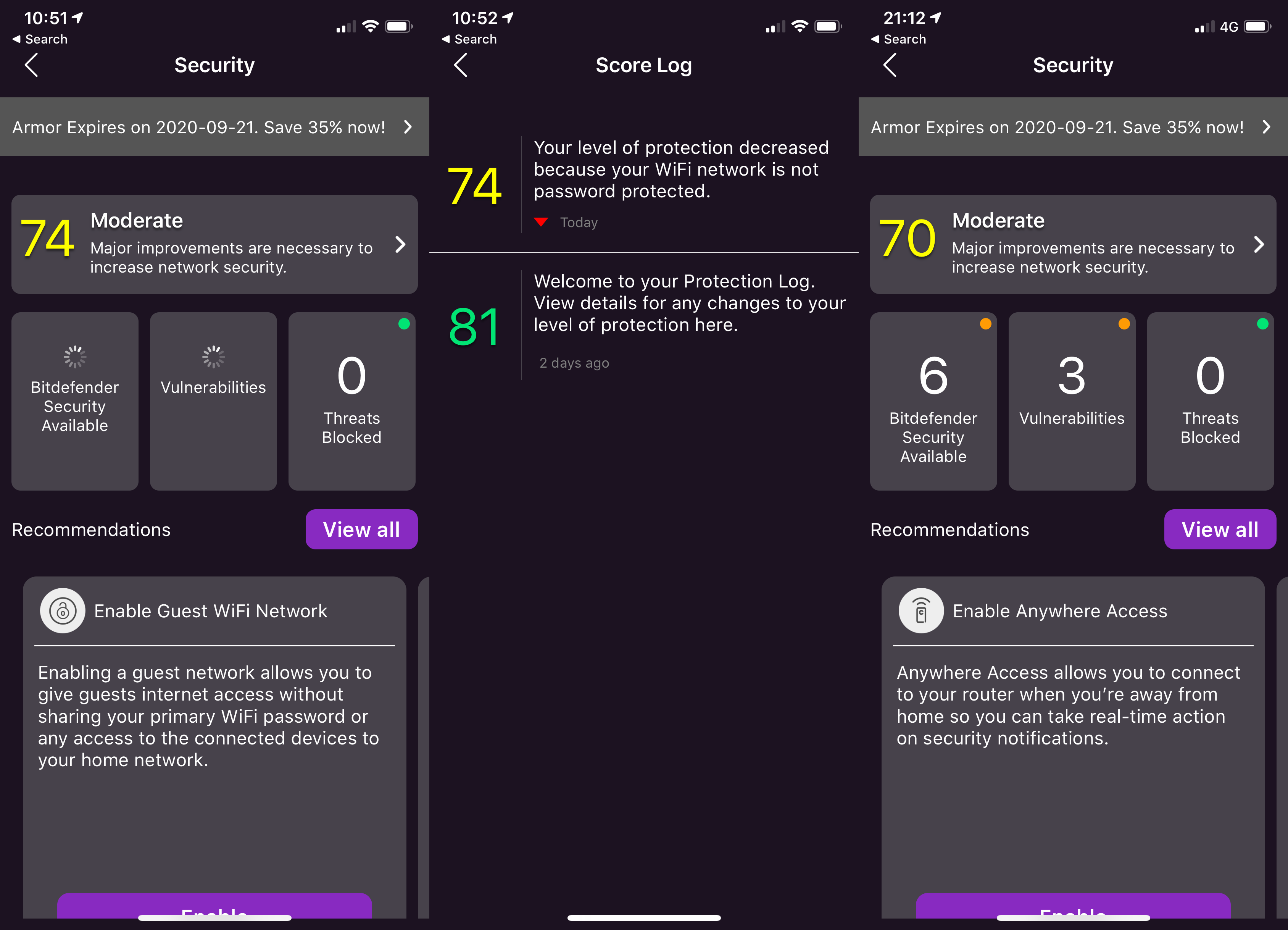 After using the Armor web portal, I found that this was because the system was pulling data from my old Orbi RBK50 system, which was a little confusing!

It’s nice to see that Circle, the parental control app, is included too. When enabled, you can set profiles for each family member, setting the type of sites that each person can look at on their devices. Upgrade to the more expensive version, and you can set schedules, time limits and bedtimes, automatically blocking a child from using any of their devices past a certain time, for example.

Via the web interface, you get some more advanced features, including support for BT IGMP proxying, which is required if you want to use a BT YouView box to watch streamed channels, such as BT Sport. There are port forwarding and VPN support, too.

You’ll also want to check the advanced Wi-Fi settings, as by default two major technologies to make the most of Wi-Fi 6 clients are turned off: OFDMA, which improves bandwidth sharing by allowing a channel to be shared between multiple clients more efficiently; and MU-MIMO, which lets clients use a dedicated stream.

Testing with a 2×2 Wi-Fi card, I ran some throughput tests on the Netgear Nighthawk RAX200 and found that it was the fastest router that I’ve ever tested. At close range, I got average throughputs of 742.14Mbps, which is close to Gigabit speed; on the first floor, speeds were still quick at 384.19Mbps, and on the second floor, the router managed 357.66Mbps. That’s faster that the Netgear Orbi RBK852 mesh system, which had a satellite to help out.

Switching to the 2.4GHz band, and speeds were less impressive: 104.24Mbps at close range, 80.86Mbps on the first floor and 78.13Mbps on the second floor. The main reason for these rather average speeds is that 2.4GHz is really congested where I live, so the router could only operate on a single channel.

Overall, the RAX200 was so fast that I managed to get full internet speed everywhere in my house with the router placed in the front room. That’s exceptional performance and shows how powerful this router is. However, where the Orbi mesh system struck ahead was at long range. By placing an Orbi satellite in the back of the kitchen, I could get fast Wi-Fi outside; the RAX200 struggled to get a single channel into the back garden. 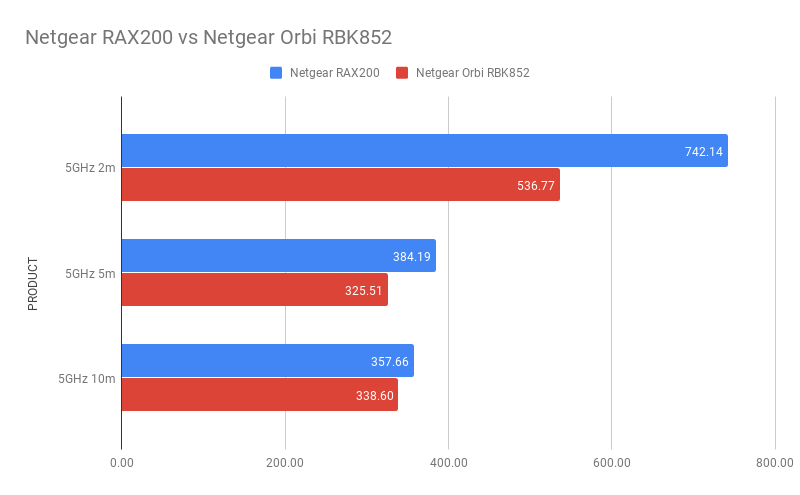 Should you buy the Netgear RAX200

Your main choice of wireless router will likely come down to whether or not you need a mesh system or not (see, router vs mesh system for more information), based on how easily a wireless signal can get around your home.

If you live somewhere where there’s not a huge amount of interference and can place the router in a good spot, then the Netgear Nighthawk RAX200 is the king of routers. In my tests, it outperformed every other wireless product I’ve tested, even doing better than the Netgear Orbi RBK852 Wi-Fi 6 mesh system. More impressively, the RAX200 managed faster throughputs at the extremes of my house than the Orbi, and only struggled to give coverage in the garden.

That’s impressive going, by any account, and the simplicity of having one router shouldn’t be overestimated, plus the fact that a single router is often cheaper than an entire mesh system. Case in point, the RAX200 costs around the same as the older Wi-Fi 5 Orbi RBK50, and you get the latest technology.

The closest competition is the Netgear RAX120, which has the same number of streams and maximum throughput, although it squeezes more streams into a single 5GHz band. The RAX120 is a touch cheaper, but I’d rather have the flexibility of the tri-band network here, making the Netgear Nighthawk RAX200 the best premium router that I’ve tested.