Officially the cheapest Wi-Fi 6 mesh system that we've reviewed, the Netgear Nighthawk Mesh WiFi 6 System is a budget way to get the latest wireless technology. It's an extremely basic system, with no parental controls or security, and speed drops off over range when you rely on a wireless connection between satellites. If you can switch to Ethernet, then performance dramatically improves. It's not for everyone then, but those with the right cabling or on a tight budget will find a lot to like.

When they first started to appear, Wi-Fi 6 routers were exceptionally expensive, and mesh systems even more so. Recent months have seen prices drop, and now the Netgear Nighthawk Mesh WiFi 6 System is the cheapest that we’ve seen, approaching levels of Wi-Fi 5 models.

Decent performance with the right setup can make this a bargain, although it’s a very basic mesh system lacking many of the more advanced features that other mesh systems have.

The Netgear Nighthawk Mesh WiFi 6 System is sold as two systems. Both ship with a cuboid router, that’s packed into a small black box. With the funky patterned top, the routers look great and don’t take up much room. 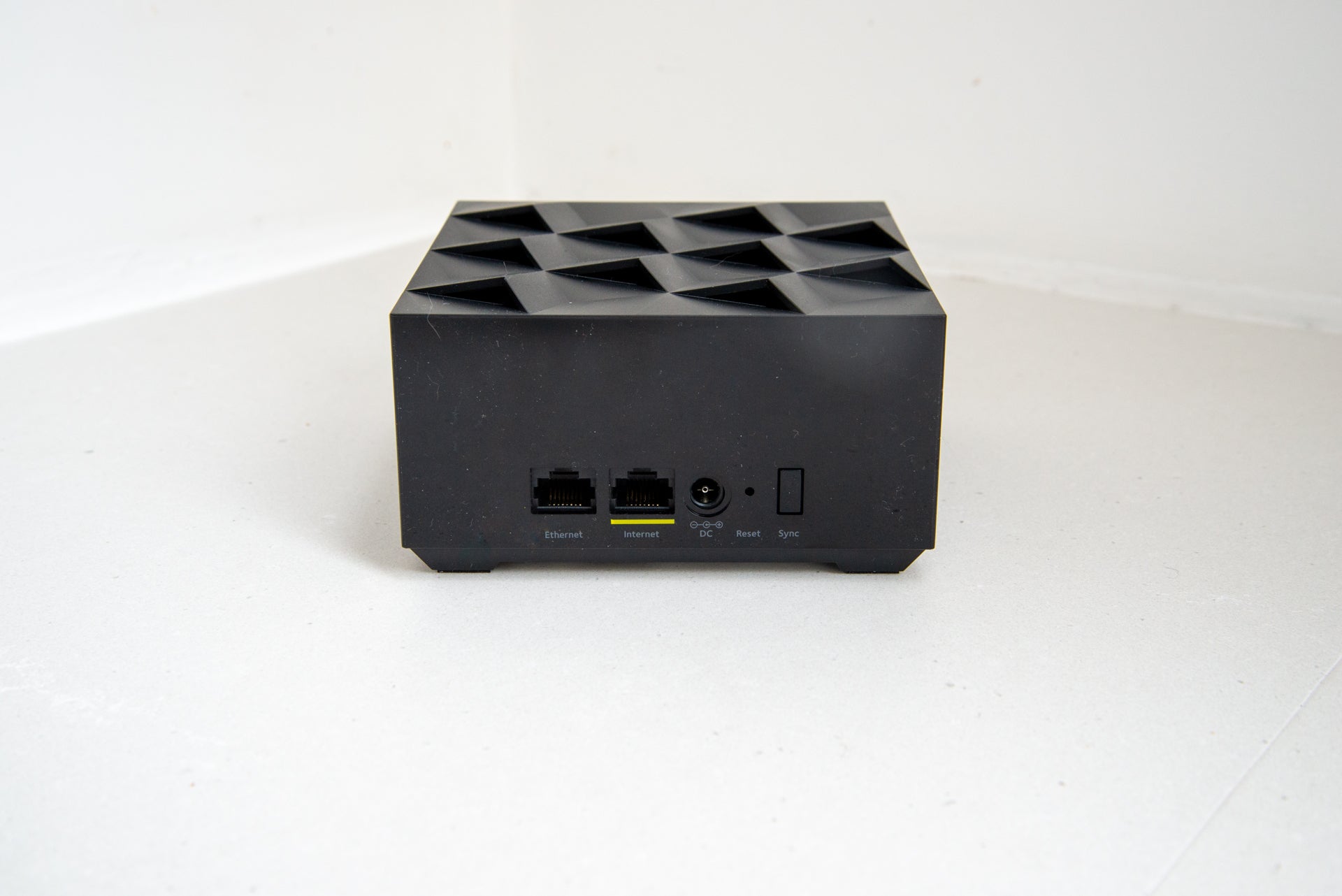 The choice of the pack either gets you one or two satellites (MK62 and MK63, respectively). In either case, the satellites are in identical boxes to the router, only they have only a single Ethernet port.

Again, if you want to connect more wired devices, you’ll have to upgrade and add some external switches. Every device is the same size (121 x 121 x 64mm), making this mesh system very easy to find space for.

Related: Should you buy a Wi-Fi 6 router? 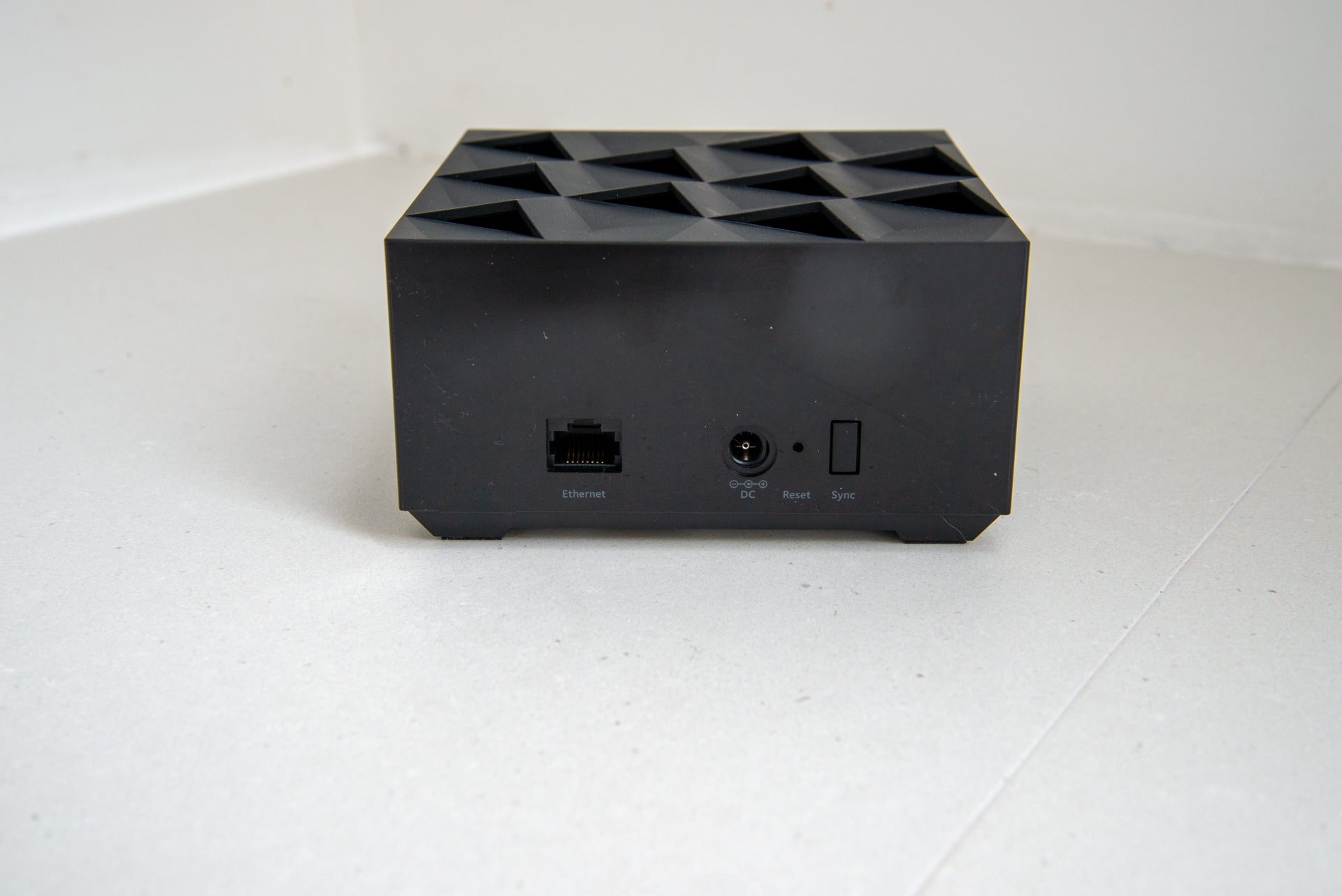 You need the Nighthawk app to set up the system. As there’s a default, secure wireless network out of the box, it doesn’t take long to run through the wizard and connect the system to your internet connection. The wizard also helps you configure your own network details, so you don’t have to stick with the defaults.

Satellites come pre-paired, so you just need to turn them on at the right time and they’ll connect automatically. Each satellite has a status light on the front that shows you the signal strength: you want a strong blue light, which shows you the connection between satellites and router is good. Annoyingly, these lights don’t turn off automatically and there’s no way to turn them off in the app, either.

Once the system is up and running, you’ll notice that it’s very basic. The Nighthawk system, unlike the Netgear Orbi, doesn’t have any security system built in, nor does it have any parental controls. You can view connected devices and pause the ones that you don’t want to have access to the internet, but that’s about it. 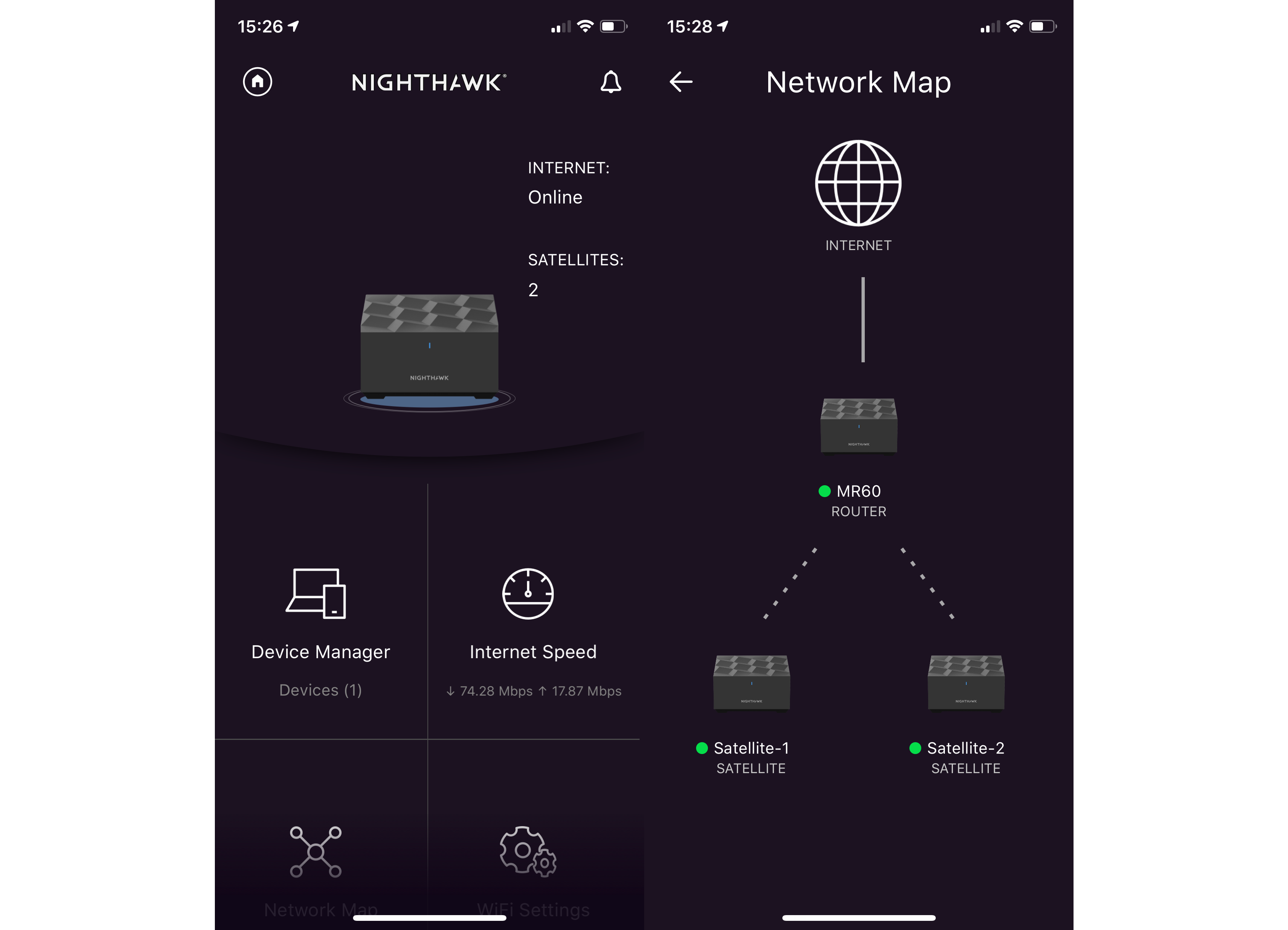 From the app, you can speed-test your internet connection, but this will merely tell you how fast your broadband is. Open up the web interface, and you can also turn on QoS, which uses your internet speed to automatically ensure that no one client can leach your entire bandwidth.

From the web interface, you get a few more advanced features too. You can set the wireless channel manually for both the 2.4GHz and 5GHz networks, you can turn on port forwarding, and you can turn on BT IGMP support, which you need if you want to watch streamed BT TV YouView channels. That really is it for this system, and you get a lot more features if you buy a different mesh system.

More streams are generally better, as it lets the mesh system share out the bandwidth more efficiently. My guide, what is Wi-Fi 6?, explains more.

Setting the third satellite up in my kitchen, where the signal is usually quite poor, I got an average throughput of 114.67Mbps. These aren’t bad results but, close-range aside, there are faster Wi-Fi 5 and Wi-Fi 6 systems in place. 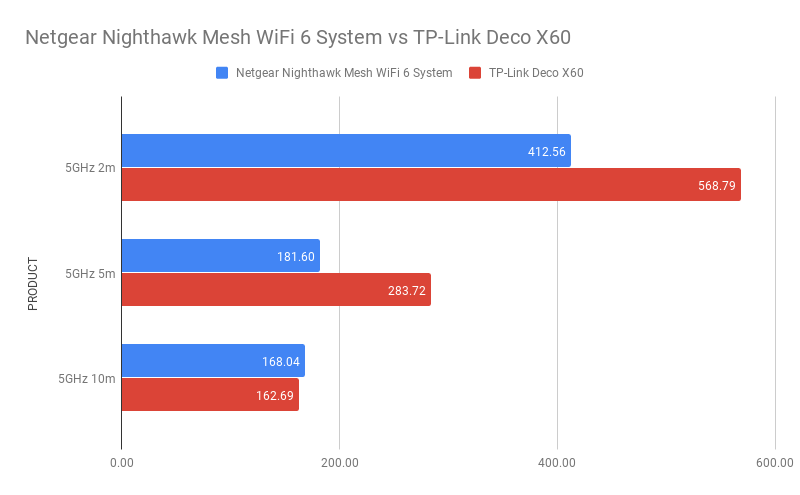 That all said, the Netgear Nighthawk Mesh WiFi 6 System can use an Ethernet backhaul, using a wired network for communication between satellites. Netgear says that you can only do this for one satellite, but that’s because of the limited number of Ethernet ports. If you plug in switches and connect your router and satellites to these, you can use Ethernet across the entire system.

Testing in the kitchen using Ethernet backhaul, performances improved to an impressive 480Mbps. If you can use Ethernet everywhere, the Netgear Nighthawk Mesh WiFi 6 System can be very fast indeed. And, given that satellites cost around £129 each, this system is cheap enough that you can put an access point in each room that you need it, going for localised Wi-Fi rather than using fewer, bigger, more expensive satellites to cover a larger area.

Should I buy the Netgear Nighthawk Mesh WiFi 6 System?

Price-wise, the Netgear Nighthawk Mesh WiFi 6 System is very attractive, as it gets you the latest technology at the lowest price that we’ve seen. Performance when using wireless backhaul isn’t particularly good, although the system at least maintains strong coverage throughout your home.

Spend a bit more and you can get the TP-Link Deco X60, which has far more features and better performance. Or the Asus ZenWifi AX is a little more expensive again, but gives you tri-band Wi-Fi. At the top of the pile is the Netgear Orbi Wi-Fi 6.

That doesn’t mean that the Netgear Nighthawk Mesh WiFi 6 System is a write-off, though. For smaller homes, the two-pack is the cheapest way of getting Wi-Fi 6, and the system is very reliable. And, if you have Ethernet around your home (or to large parts of it), you can cheaply add satellites where you need them, both increasing performance and the number of Wi-Fi channels that you have. This system isn’t for everyone but those with the right cabling or those on a tight budget will find it great.