It seems there is never a good time to buy a new piece of technology, but never has this been truer than with routers in mid-May 2012. For those not in the know late May will see the launch of a new wireless standard, 802.11ac, capable of speeds surpassing a gigabit so anything launching with humdrum 802.11n needs to be exceptional. Netgear thinks it has one such product.

With the long winded ‘WNDR4500 N900 Dual Band Ethernet router’ Netgear is throwing the kitchen sink at your home network. As the name suggests, the highlight is the N900’s dual 2.4GHz and 5GHz bands each of which is capable of theoretical speeds up to 450Mbit and can run simultaneously (hence the ‘900’ reference). To achieve this Netgear has fitted the N900 with two radios and boasts improved range thanks to no less than six antennas. 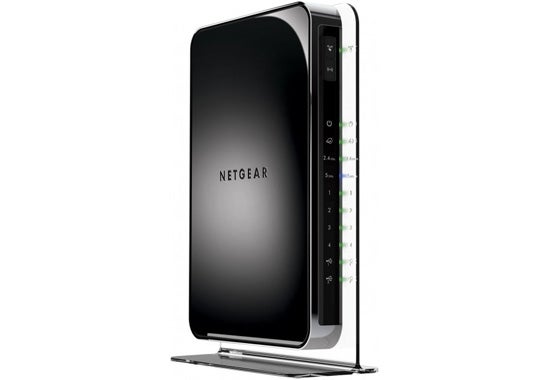 On top of this Netgear has unusually equipped the N900 with two USB ports: one for a printer, the other for networking storage from a memory key or external hard drive. There are also four Gigabit Ethernet ports, push button WPS Wi-Fi security and individual power and Wi-Fi off power buttons (the latter to cater for the wired-only crowd. What is missing is DSL as the N900 is a cable only and connects to a dedicated modem.

Ultimately however this is feature heavy and it is reflected in the N900’s size. To put it bluntly, the router is huge. At 258 x 172.5 x 81 mm it has a footprint as large as an 11in laptop and at 680g it is as heavy as an iPad. This isn’t the last of it either since the N900 takes a trip down memory lane requiring a hefty external power brick (though having the power supply mid-cable rather than on the plug does have its advantages). Despite all this the N900 is a good looking router with an admittedly fingerprint catching piano black finish and a clear stand which gives the impression it is hovering in the air. Surprisingly, given this bulk, the stand is fixed so the N900 sits upright only – arguably not the wisest choice.

Routers aren’t usually so eventful in appearance, but thankfully the N900 is far less polarising when it comes to getting up and running. Netgear deserves a great deal of credit for its ‘genie’ setup software, which has dropped the usual text heavy screens and endless menus of most router software in favour of an icon driven user interface and smart connection wizard which hand holds you through the simple process of plugging in cables and getting your devices online. This includes the ability to set Parental Controls to restrict content to specific network devices and ‘Guest Network’, which can assign temporary internet access. 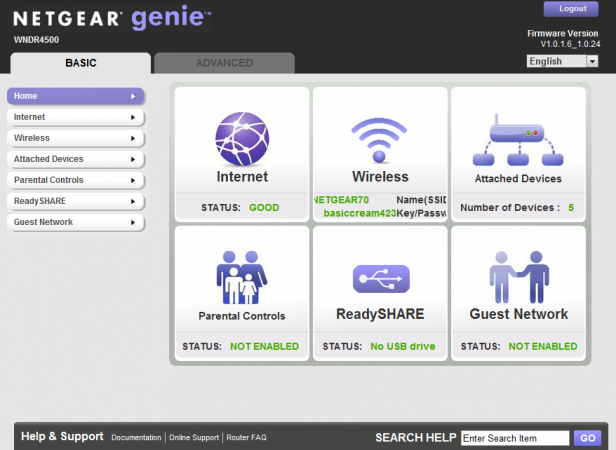 Those who like to tinker more deeply will also find DLNA compatibility, QoS settings, dynamic DNS support and more. One curiosity is Netgear’s decision to restrict the N900’s 2.4GHz band to 217MBit by default rather than 450Mbit. This is deemed friendlier to neighbouring signals, but it means you’ll need to make an adjustment if the N900 is to live up to its name. Happily, Genie makes this a breeze.

The Netgear WNDR4500’s Genie also gets kudos for its Genie mobile app (currently available on iOS and Android) which allows you to configure and block devices, view all hardware attached to your network and stream media from all DNLA compatible devices. It is definitely a class leader. 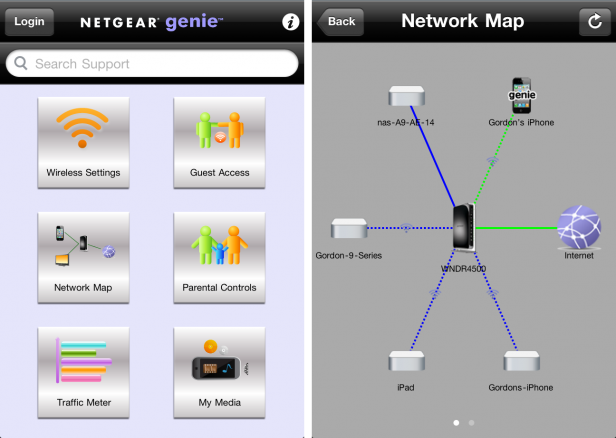 For all the plaudits we’d like to throw at Genie, the simple fact is it comes with all modern Netgear routers so the N900 has to earn its own praise. Primarily this comes through performance and taken on pure numbers it does a good job. 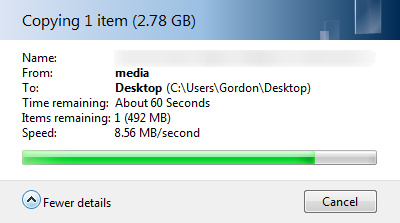 All these speeds are enough to reliably stream HD content and head and shoulders above every router we have tested with the notable exception of the D-Link DIR-645 SmartBeam. In the same test area it managed 10.3MB (82.4Mbit) per second at two metres, a speed it maintained at 10 metres line of sight and dropped to 5.51MB (44.88Mbit) per second at 10 metres with the same two walls obstructing it. This creates a problem for the N900 as the DIR-645 achieves this using the supposedly 2.4GHz band (it is a single band router) and retails for just £79.99.

Against this is the fact dual band will be invaluable for busy tech savvy households and we found the N900 could maintain these performance figures with both bands transferring data simultaneously. This makes multiple HD network streams a viable proposition as long as your NAS or Internet connection can keep up. 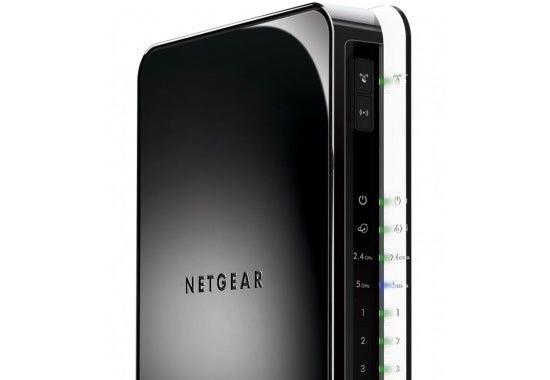 So should you buy a Netgear N900? The biggest problem is price and expectation. Online retailers commonly list the N900 in the £120 to £140 range which is a significant premium over the even faster D-Link DIR-645 SmartBeam, but it does offer dual band. As for expectation, if all you want to do you reliably stream HD video around your house the N900 works brilliantly – even if it is massive.

If you raise expectations a little higher, however, you come to the question of the imminently available 802.11ac. Indications are they will be little more expensive than premium 802.11n routers (which the N900 certainly is), but they require bulky and pricey (circa £30) USB dongles for each computer and smartphones and tablets are unlikely to be compatible for some time. Then again who wouldn’t want to future proof?

”’Verdict”’
The Netgear WNDR4500 N900 Dual Gigabit router is a good product launched at a bad time. It is notably bulky, but performs well – especially simultaneously over two bands – and has excellent range. Against this the cheaper, single band D-Link DIR-645 SmartBeam beats it in raw performance and 802.11ac equipment is just weeks away. Who wouldn’t wait for that?