There’s a veritable cornucopia of streaming video players available. While you might think that’s great for us consumers, it does make it difficult to decide just which you should pick – especially as there’s little that manufacturers can do to differentiate their products.


This puts Netgear’s Digital Entertainer Live (or EVA2000 if you prefer product numbers) in a slightly tricky position. At a touch under £100 it costs notably more than the Asus O!Play HDP-R1 and Western Digital WD TV but unlike those devices, it will barely even play 720p content (MPEG-2 is the only codec the player will decode at that resolution), let alone 1080p videos. That said, the player will up-scale the SD content it can play to 720p, and output it over HDMI, and it will play a huge variety of file formats in just about every container you could think of. But don’t take my word for it, here’s a list:

Arguably that’s more support than needed. After all, when was the last time you acquired a standard definition MKV file? Considering how much content many of us have in standard def, it’s not necessarily a deal breaker that HD playback isn’t on the Digital Entertainer Live’s agenda. Especially if you have a 720p (or 1080i for that matter) television, which then won’t be up-scaling the player’s already up-scaled output.


There is one other potential saving grace, in the form of a plethora of Internet-based video services. In addition to YouTube, which is becoming standard fare, the Digital Entertainer Live gives access to TV channels streamed from the ‘net and the BBC iPlayer. While the former may be a little redundant – why stream TV channels to a TV? – the latter is decidedly useful. The only problem is that the service that enables these features, PlayOn, is a free trial so you’ll have to stump up for a licence once that expires.

There’s a lot to be said for the design of the Digital Entertainer Live. It’s much smaller than the WD TV or O!Play and while I wouldn’t exactly call it pretty, it’s far from unattractive. The provision of two USB ports means that even if you want to use one to accommodate the available Wi-Fi adaptor, which you’ll have to purchase separately, you can still hook up an external storage device. An Ethernet port is also present alongside the requisite HDMI output and an A/V output, should your TV be archaic enough to only accept composite video. Alternatively you could connect the audio outputs to a set of external speakers, if those built into your TV are characteristically awful. 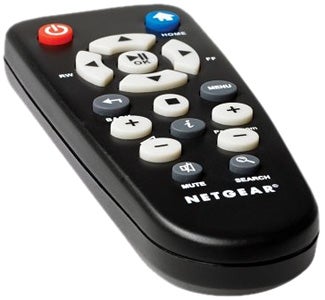 The remote control has a blissfully simple design and intuitively positioned buttons for all the frequently used functions you could possibly need. It might sound a little strange to make such a point of this, but so many manufacturers get it wrong that it’s hard not to be impressed by those which don’t.


The user interface of the Digital Entertainer Live is also an excellent blend of design and functionality. The menus are sensibly organised, with everything where you would expect to find it. Even searching for videos online is as easy as any keyboard-less interface can be. 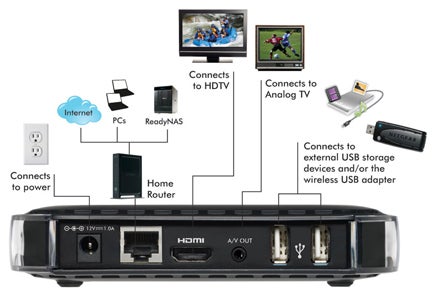 When it comes to the actual business of playing videos the player puts in a fine performance. Obviously the quality of displayed video will depend on the source material, but if you’re happy to watch standard definition content then there’s little wrong with the way the Digital Entertainer Live displays it. The only niggle is a slight, but noticeable, greying of the should-be-black bars on letterboxed videos.


This would be all well and good if the Digital Entertainer Live was perhaps £30 cheaper. Unfortunately at its current price it’s hard to see why you’d buy this player over its cheaper, better featured rivals.


The Digital Entertainer Live is a good-looking, easy to use media streamer that performs well. However, the lack of HD playback and its higher price compared to the competition mean you’re better off looking elsewhere.