High definition has become the technological buzz-phrase of 2007. Here at TrustedReviews we’ve been banging on about it for ages, but this is the year it has gone global. You can tell because everyone’s using it, from high street flat screen salesmen to journalists on daily papers. Even my dad knows about high def’.


But it’s not just talk. The equipment to play back high def is here and is becoming more affordable by the day. Large television sets taking full advantage of HD’s maximum 1080p resolution can now be had for under a grand, HD-DVD players have come down in price to around the £200 mark and you can pick up a Blu-ray player – in the shape of the Playstation 3 – for around £400.

Now, Netgear has thrown its hat into the ring with its wireless Digital Entertainer HD EVA8000, a device – amazingly – that can stream HD video from your computer’s hard disk or NAS box straight to your shiny new high resolution telly.


It’s essentially an upgrade of the company’s EVA700 player – you may have seen one on the shelf at a certain technology superstore – and, from the front at least, it looks almost identical. It’s the same width – that of a standard DVD player, and has all of the same buttons and sockets too (USB and headphone output). If you look hard enough, however, you’ll see a subtle HDMI logo in grey, which hints at more drastic changes out back.


A quick look at the rear of the device reveals not only SCART, composite, S-Video and component video outputs, but also an HDMI socket. And the latter connections allow HD video up to 1080i to be watched. The device will play 1080p files but currently down-converts these to 1080i (a firmware upgrade in a couple of months should fix this). In addition, you’ll find stereo phono outputs for analogue audio, two digital audio outputs – both coaxial and optical – an Ethernet port for those lucky enough to have a router close by, and another USB socket. 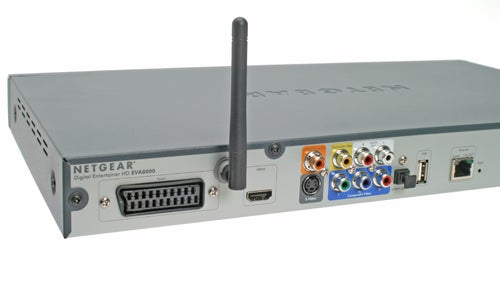 Even with such impressive connection credentials, however, I was sceptical about that HD streaming claim. After all with disc-based HD video playing back at bit rates of up to 54Mbit/sec, it’s hard to see how a wireless network is going to keep up, especially considering that the maximum wireless speed supported by the EVA8000 is 802.11g with its relatively slow throughput of theoretical maximum of 54Mbit/sec, and in reality you’ll probably get a fraction of that.

Fortunately, HD video doesn’t have to be so bandwidth hungry, as you’ll find if you take a look at the DivX Stage6 website, where there’s lots of 720p content to be had that requires as little as 2.5Mbit/sec of your network bandwidth. The latest Windows HD WMV codec also enables resolutions of up to 1080p to be played back using bitrates of just 6-7Mbit/sec. 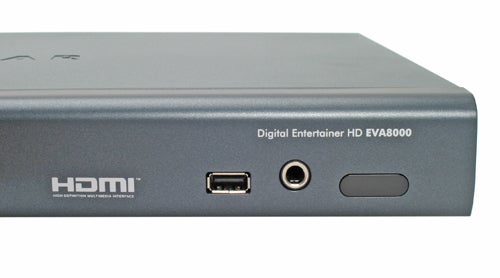 In theory, then, you should be able to stream HD content smoothly over your wireless network once you’ve compressed the original file. And most of the time that certainly proved to be the case. Most of the HD DivX movie trailers I downloaded from the Stage6 website streamed perfectly and in all their high definition glory to my TV. The end result won’t match full-blown Blu-ray or HD DVD but it still does a very decent job. Colours are vibrant and naturally produced, edges crisp and clear and frame rates smooth and without any kind of judder or stutter. As with all digital video content it does depend on the quality of the encode, but nonetheless the quality was highly impressive.


Needless to say, standard definition video played back flawlessly too and though the player wouldn’t play the ‘raw’ DV-AVI files from my camcorder and a number of other camcorder-generated files (it doesn’t support playback of DV-HD or AVC-HD files either), all the video content I converted to DivX played back perfectly. In addition, the EVA8000 will stream H.264 AVC, VCD, MPEG-2 (SD and HD), MPEG-4 (SD and HD), MP4 and MOV files. 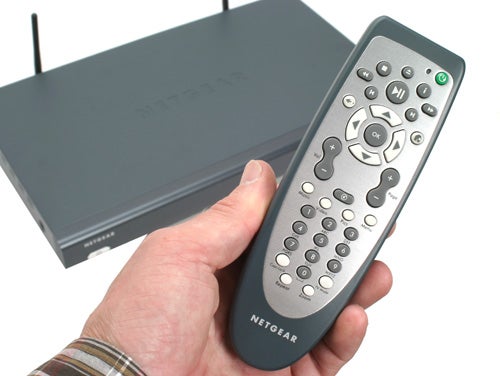 Things weren’t perfect, however. Keeping an eye on the bandwidth used, I played back a few of the WMV files, both 720p and 1080p that can be found on the Microsoft HD showcase site and here the EVA8000, or rather the network it was connected to, began to struggle. With the server, router and player all situated in the same room, the 802.11g network seemed to run out of steam at around 7.5Mbit/sec with sound going first and then pictures slowing up significantly with anything that dared to consume over 8Mbit/sec of network bandwidth. Having one device – say the server or NAS box – attached to the wired part of your network did improve things, but it seems that in order to stream those higher bitrate files – ie anything above 720p – you’re going to need to go completely wired. Of course those USB sockets on the front and rear mean that you can also connect a hard disk or thumbdrive with your HD content on it directly to the EVA8000, which solves any bandwidth issues.

But the EVA8000 is not just a one-trick pony and while you can use it solely to stream home movies and other clips from your PC or NAS box, you’d be kinda missing the point. Because not only can this box stream digital video files stored on your PC to your TV, but it can also be used to stream and display pretty much every type of media you can have on a PC. One of its main party pieces is that it can be used to control a TV tuner attached to your PC. As long as it’s on Netgear’s list of supported devices, you can use it to not only stream TV direct from your PC, but also to access the program guide and set it to record your favourite TV programs from the comfort of your sofa. 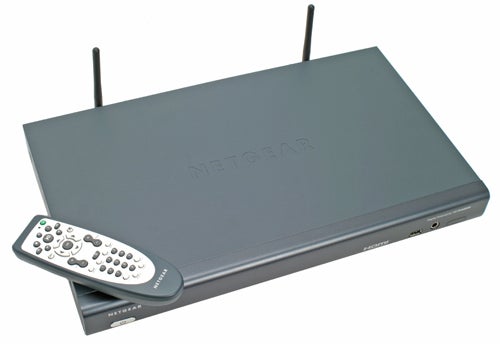 Those digital connections mean it’s also a highly capable audio streaming device. It will stream not only the usal MP3 and WMV files, but also lossless FLAC and WAV files, and even copy protected iTunes and WMV files. Navigation is a little cumbersome, music files, irritatingly, take a moment or two to buffer each time you play one, and it’s worth pointing out that this box doesn’t have the best sound quality in the world (via the analogue phono outputs). However if you use the digital outputs to couple it with your own DAC or multi-channel home theatre receiver, the quality will be as good as your equipment allows it to be.


Also on the EVA’s impressive list of capabilities is the ability to tune into Internet radio, access YouTube videos (though we’re not entirely convinced as to the merit of that idea), view RSS news feeds, browse your photo library based on the folders you have shared on your various connected devices and even access and control your PC’s desktop remotely using the supplied software. 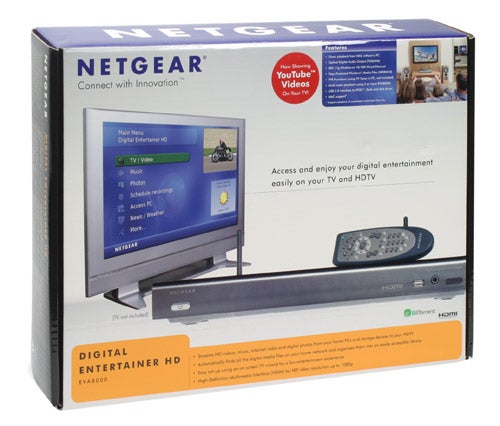 The EVA8000 also has an http server built into it so you can control it from any Wi-Fi Internet ready device without the need to leave the TV switched on (handy if you have a Plasma), or log in remotely to set the PVR record functionality when you’re away from home. It is truly a Jack-of-all trades list of features. The only downside appears that it isn’t the most stable system in the world – scanning for media content across my wireless network caused the box to freeze up occasionally, but this seems a small price to pay for such a powerful device.


The EVA8000 is clearly an extremely capable media streaming system. Not only is it able to play HD video over a pretty sluggish 802.11g network – an impressive feat in its own right – but it can also be used to stream, listen to and display a large proportion of the media files you may have scattered around your network, be they on a laptop, PC or NAS box.


It’s a feature set that many would pay good money for, but with the EVA8000 you don’t have to. Incredibly, you can bag all this for a paltry £192 – so if you’re in the market for a device that draws all your photos, video and audio together in once place, it really should be top of your list.