Less than a year ago we looked at Netgear’s sleek DG834G (see router group test) and concluded that for a home or small business all-in-one communications router it delivered a fine set of features for the price. Alas, the blot on Netgear’s landscape was poor overall wireless performance that knocked its scores down considerably. However, time moves on and Netgrear now offers the DG834GT, which aims to deliver an equally impressive list of features and, hopefully, substantially improved wireless speeds. 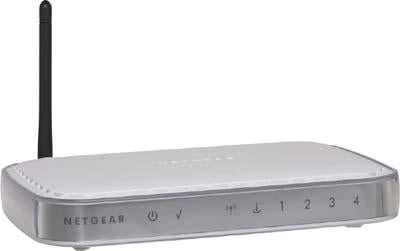 The main differences between the DG834GT and the older model is the fact that it supports faster 108Mbit/sec operations. Physically, it’s much smaller than its predecessor, although this white plastic lozenge offers an equally good hardware specification. For starters, you get an integrated ADSL modem teamed up with a four-port Fast Ethernet switch, while the internal wireless access point (AP) supports simultaneous access from 802.11b and g clients. 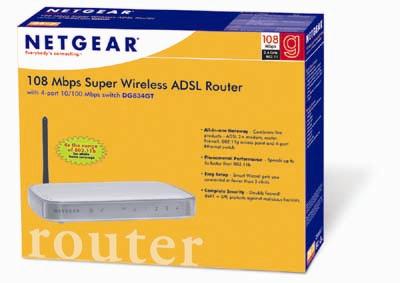 Netgear has installation down to a fine art so you just connect a PC to an Ethernet port and once DHCP has done its stuff you can point a web browser at the router’s default IP address. You’re greeted with Netgear’s typically tidy browser interface and a quick start wizard that has a go at automatically detecting your Internet connection. We tried this with BT Broadband and found that it worked without any problems leaving us just to enter our account details to get online in a matter of minutes. Internet security starts with NAT, which hides all the local machines by mapping their IP address to that provided by the ISP. Next up is a standard SPI firewall which defaults to blocking all unsolicited inbound traffic. You can modify the default firewall rule and add your own but as always we recommend extreme caution when playing with these. At least the brave or foolhardy will approve of the copious documentation provided on this topic.

You can restrict web access but the router implements simple URL filtering so will only look for keywords in the web page address and not the content. You’ll have to create a complete list of sites you want to block but there’s an option to specify IP addresses on the local network that are exempt. A single schedule can also be created so firewall rules and website blocking lists can be applied at specific times of the day or week. If the router comes under attack or detects a port scan it can send an alert to one email address and this can also be used to notify you if a user attempts to access a banned website. Detailed activity logs are maintained and these can be emailed to the same address at regular intervals.


Wireless security is present and correct and along with 64 and 128-bit WEP encryption the router supports WPA. A new feature is 802.11x authentication via a RADIUS server. You can set one of these up using a Windows 2000 Server or Server 2003 system but it’s unlikely the target market will bother with this and the manual is devoid of help on this topic anyway. You can stop the AP broadcasting its SSID and MAC address filtering is available but you can only allow access to those systems on the list and not create a deny list as well. Usefully, the router displays the MAC address of all connected wired and wireless clients so it won’t take long to create an access list.


So far so good, but does Netgear measure up in the wireless performance stakes this time? Using a Windows XP SP2 Fujitsu Siemens notebook we ran tests over a standard 802.11g unsecured link and also with 128-bit WEP and WPA-PSK enabled and were impressed with the ease of connection. With some APs we’ve experienced connection problems when using encryption but our Proxim ORiNOCO Gold Card worked perfectly and instantly with the router in all modes. Performance was also a big improvement as we saw the open source Iometer report 23.5Mbit/sec with encryption disabled followed by 22.4Mbit/sec and 21.6Mbit/sec for 128-bit WEP and WPA respectively. However, moving the notebook to the floor below the AP saw a general drop in throughput of around 20 per cent across all modes so the range isn’t as great as Netgear claims.


We tested 108Mbit/sec operations with a Netgear WG311T PCI adapter installed in an XP SP2 workstation and saw raw performance step up to 35Mbit/sec with no encryption selected. Not as big a jump as you’d want but it still makes it worthwhile using Netgear’s 108Mbit/sec PC Cards and PCI adapters and at the time of writing Netgear is offering a promotional bundle which includes a free PC Card.


Home users and small offices looking for an out-of-the box communication solution won’t go far wrong with the DG834GT. It offers a good package, although for around the same price you could go for the Billion myGuard 7500GL, which incorporates true web content filtering and integral anti-virus measures. Other than that, this router is extremely easy to set up and use, delivers all the required wired and wireless security and improves significantly on the previous model’s wireless performance.