This is Netgear’s affordable all-in-one. It marries AC1200 802.11ac WiFi with an ADSL2 plus modem for an appealing price in an attempt to win over the mainstream user looking for a neat, single box solution. But with many ISPs hopping on the wireless ac bandwagon is it too little too late?

Certainly from a visual perspective, the D6200 looks dated. Having seen router designs move from sitting flat, to being positioned upright to laying flat once more, the D6200 is something of a step back in time. That said this is a common Netgear design and we’d love to see it follow the more exciting lines the company created for its flagship, the R7000 Nighthawk.

As well as being no looker, the D6200 also isn’t that well put together. There is some flex in the plastic chassis and the razor sharp corners feel somewhat unnecessary. Again this is a Netgear design trait, but one that could do with updating.

As for size, at 205 x 255 x 77mm and 654g the D6200 certainly makes its presence felt. That said it has every right given it packs an integrated modem. As such it represents an interesting conundrum: the D6200 isn’t a great looking product, but it does mean you won’t need a second ugly modem sat beside it like most third party routers. 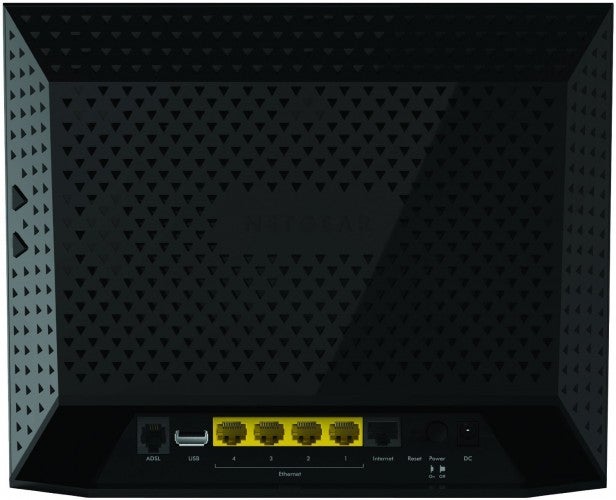 Or does it? There is an important point to make about the modem in the D6200 and that is Netgear has chosen to integrate an ADSL2 plus modem rather than VDSL. ADSL2 plus is limited to Internet speeds of 24 megabits per second, so if you have access to fibre (or are likely to in the near future) this router isn’t for you. Instead you will need a VDSL modem which is found in the Fritz!Box 7490 or BT’s Home Hub 5.

When done well, as seen in Netgear’s R6250, AC1200 is more than fast enough for most and for the DSL market it is targeting this should be adequate and a decent bump over anyone coming from 802.11n.

Aside from this the D6200 is fairly straightforward. It has four Gigabit Ethernet ports, just a single USB 2.0 port and support for IPv6 and WPS/WPA/WPA2 security. In short – as the name suggests – this is the cut down version of Netgear’s more expensive AC1750-based D6300. 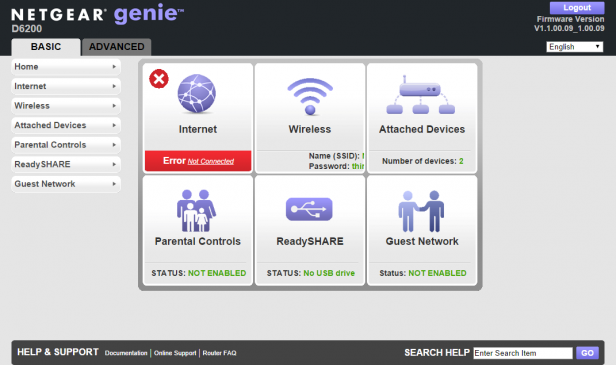 Netgear has improved its setup process in recent times, but it still lacks the polish of Linksys, D-Link and Asus. Their routers have no password when first switched on and upon the first connection they automatically open a browser tab and guide you through the setup process which includes setting wireless and administration passwords and configuring your Internet connection.

By comparison, the D6200 ships with a password by default and once you connect by typing it in or using WPS it automatically opens a browser window and begins configuring your Internet connection. That’s fine and dandy, but changing the wireless and admin passwords (the latter set to ‘admin’ and ‘password’ by default) has to be done manually by digging through the settings menu – so most probably won’t bother. 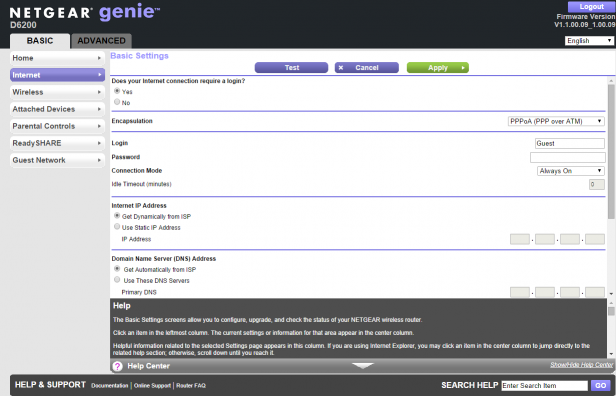 Why? Well the UI itself is no oil painting and Linksys and D-Link have a distinct edge here. That said there’s nothing particularly complicated about getting the D6200 up and running, like the design it just needs to move with the times.