What is the Netgear AirCard 785?

The AirCard 785 is Netgear’s latest attempt to disrupt a mobile hotspot market that’s predominantly controlled by telecoms carriers. While ISPs supply basic routers, third parties tend to offer more luxury alternatives, and the AirCard 785 follows that trend by being a premium 4G MiFi that Netgear hopes will tempt users to upgrade.

MiFi devices are far from the most glamorous of objects, but Netgear has certainly produced the most aesthetically appealing one we’ve seen to date.

Key to this is its use of a colour LCD screen. It isn’t particularly premium, but it provides everything you need: operator, signal, battery life, connected devices information and data usage. This is all at-a-glance information, despite being just 1.5 inches across, and Netgear has used the space well.

Where the AirCard 785 breaks from the pack though is in its form factor. Most MiFi units have a small footprint, but are very thick, while Netgear has taken the opposite route with a substantial 110 x 69mm body that’s just 16.6mm thick. This is actually nicer to carry around than a smaller, thicker design and it’s fairly light at 127g. 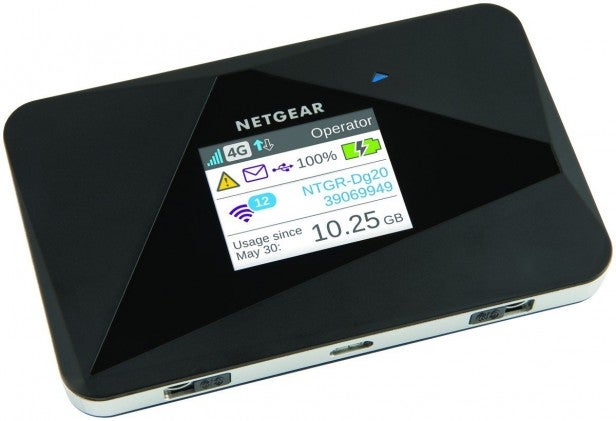 Where the real interest lies, however, is internally and here Netgear has the right ingredients. Support for 4G/LTE (cat 4) is the headline aspect, providing potential download and upload speeds of up to 150Mbps and 50Mbps respectively. Furthermore it’s compatible with all major bands: 800/850/900/1800/2100 and 2600MHz. Meanwhile 3G (including HSPA Plus) and 2G (including EDGE) support covers the 850/900/2100MHz and 900/1800MHz bands respectively.

This gives the AirCard 785 enough flexibility to be used almost anywhere in the world, and it’s unlocked so can take any SIM card you buy, provided it’s a Micro SIM.

Meanwhile when it comes to Wi-Fi the AirCard 785 may not support the oh-so-fashionable 802.11ac, but it offers dual band 802.11n (2.4GHz and 5GHz) which is rare in most MiFi. 5GHz is becoming vital, as 2.4GHz can struggle to keep up with the 100Mbps-plus speeds that 4G is starting to deliver and it adds some futureproofing to the device.

Netgear also has made two points to fit external antennas should you need to boost the Wi-Fi range and speed (not to be confused with your cellular signal). It also offers WPS – too long absent from many MiFi devices – for making fast, secure connections. 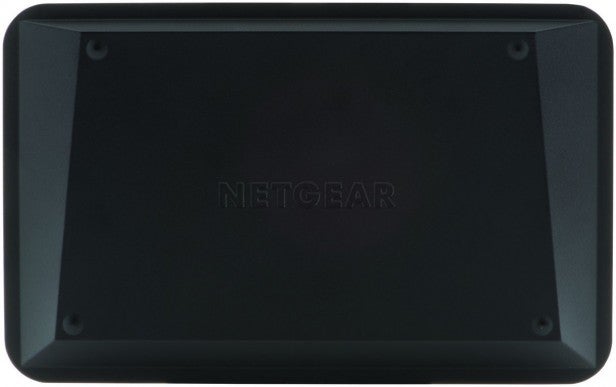 Lastly Netgear makes some bold battery life claims: 10 hours of active use and up to 300 hours on standby puts this a step ahead of the competition on paper. The battery is also removable, so road warriors can buy a spare if needed.

Omissions? There are a few. What the AirCard 785 lacks is some of the extras you often see on third-party MiFi units such as the TP-Link M5360. Most notably it can’t work as an external battery or microSD card reader, but unlike the M5360 it receives 4G and supports WPS, which means it’s better equipped for its primary task.

MiFi devices have never required the greatest technical knowledge to get up and running, and the AirCard 785 is no different.

The back comes off and the Micro SIM tray is located behind the battery – not particularly inconvenient, since you shouldn’t be switching SIM cards too often. Once the SIM and battery are inserted, you simply boot it up and it detects the network automatically. 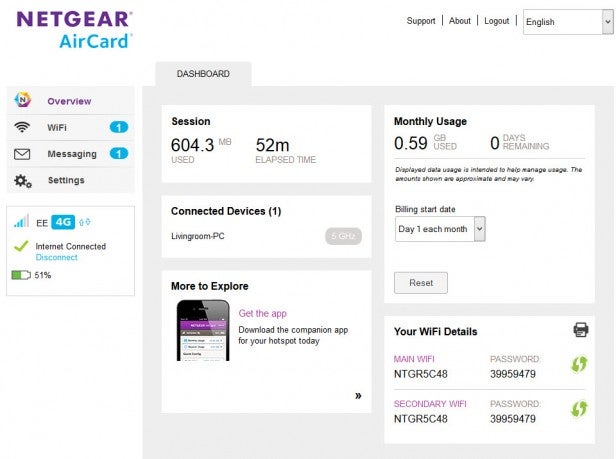 Where it could be easier is Netgear’s navigation system. Just two buttons – marked with power and minus symbols – handle all navigation with one cycling through options and the other selecting. This isn’t initially intuitive and it takes a bit of trial and error to get used to it.

That said the full browser-based UI is excellent. Found at http://netgear.aircard the simple dashboard conveys monthly and session usage, connected devices (and on which band), SSID and password info all in one place along with battery and signal status. It’s the best we’ve seen and won’t scare even the most technophobic of users.