We had no complaints with the Dolby Digital 5.1 mixes of the two TV series. They sound as clear and dynamic as the soundtracks that accompany their HD versions, showing that the data demands of 4K video haven’t required anything nasty to be done to the audio tracks.

One issue we noticed while testing the Netflix 4K feeds on a Samsung 85-inch TV, though, is that there were at times some pretty significant audio sync problems, leading to people’s lips moving out of time with the words they’re supposed to be speaking. At the time of writing Samsung tells us it’s working to fix this issue within its TV, suggesting that it believes it’s an issue with its own HEVC decoders rather than Netflix’s streams. But if you’ve experienced similar issues with Sony, LG or Panasonic Netflix-capable TVs feel free to let us know in the comments section.

During our tests we were impressed with the stability of the 4K streams. We didn’t notice any noticeable reductions in the streaming quality caused by potential bottlenecks at Netflix’s server end. Admittedly the broadband connection we were using had plenty of headroom above the 15Mb minimum Netflix reckons you need for a quality 4K experience, but it’s still reassuring to see that seemingly the only data streaming factor to worry about is the speed and, potentially, contention rates of your own broadband connection.

Should I subscribe to Netflix’s 4K Ultra HD service?

Right now Netflix arguably doesn’t have enough 4K content available to UK subscribers to justify the extra £3 a month it’s asking over and above its HD subscription. Certainly it doesn’t make as much sense here right now as it does in the US where there’s markedly more content for the same premium subscription.

With this in mind you might be advised to wait and see what Amazon’s 4K Ultra HD streaming service has to offer when that goes live here. The Amazon 4K service just launched in the US offers decent amounts of content without adding anything to its current HD Prime Instant subscription, so hopefully we’ll get something similar over here at some point. 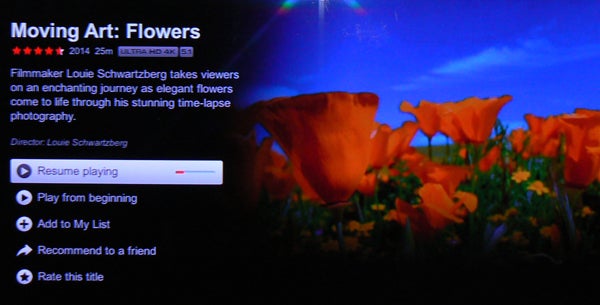 On the other hand, with precisely zero other native 4K content around at the time of writing, anyone who’s splurged on a 4K TV may well find the lure of House Of Cards and Breaking Bad in 4K irresistible for £3 a month – especially if they haven’t watched either series at all before. After all, £3 a month still works out way cheaper over, say, a year than buying every series of each show on Blu-ray – and Blu-ray isn’t even 4K!

Plus, of course, although it’s taking longer to arrive than hoped there will be more 4K content coming to Netflix’s service in the coming weeks and months, and every film or TV show that drops will enhance the service’s value.

Netflix’s 4K service in its current form is a perfect microcosm of everything that’s good and bad about 4K right now. Content levels are thin, in keeping with the general 4K drought. When the service looks its best – with House Of Cards – it provides a delicious reminder of just how much of a difference 4K can make to picture quality. Yet at its worst Netflix’s 4K content also reminds us of the myriad challenges involved in preserving 4K quality all the way from camera lens through to the TV in your living room. 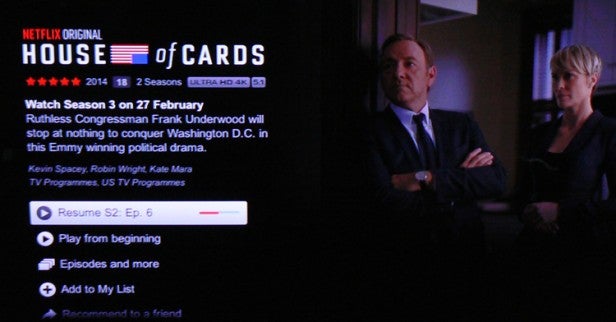 In short, today’s Netflix 4K Ultra HD service is more ‘one to watch’ than an essential purchase. Though having said that such is our love for all (well, most) things 4K that it wouldn’t in truth take much more House Of Cards-quality content at all to arrive on the Netflix platform to get us reaching for our credit cards faster than you can say “4K rocks”.