Despite being small so far, Netflix’s 4K offering provides a pretty telling snapshot of the current state of 4K play – both the good and the bad.

The good, without a shadow of doubt, is House of Cards. Both series of this show, from the first episode to the last, look mostly gorgeous. Detail levels are immense, for instance, clearly outstripping Netflix’s HD streams. This is especially apparent with exterior or bright shots, and the opening credits sequence looks so mouth-wateringly spectacular you might well find yourself rewinding it a few times just to see it again.

Skin, hair, clothing and other key parts of the picture are also full of HD-beating textures, and the sense of depth in large-scale shots across Washington is sensational.

Colours look fantastically natural too, thanks to the accuracy of blend the extra resolution can deliver and what’s clearly some superb 4K mastering from a digitally shot 5K source by the show’s creators.

House of Cards’ images aren’t perfect. Dark interiors tend to look softer than the bright exteriors, with more chance of visible compression artefacting (blocks and stripes) over background areas. Also the image seems to soften up a little during camera pans or when there’s a lot of motion in the frame. But considering the route it’s taking to get into your living room it really does a remarkably good job of making you happy you invested in a 4K TV.

It’s worth saying at this point that we actually tested Netflix 4K for this review on an 85-inch 4K TV, so there really was no hiding place for any flaws in the 4K streams. 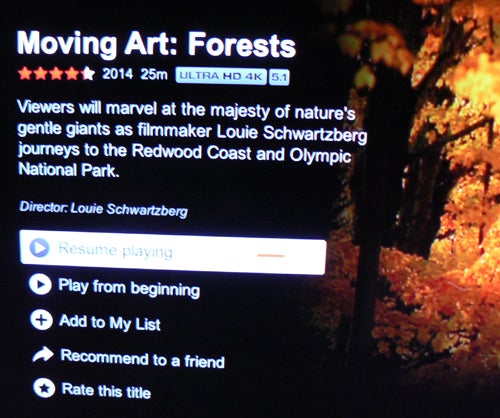 Moving on to Breaking Bad, first impressions aren’t actually that great. The picture looks markedly rougher and less polished than House of Cards, with more compression artefacts, a less nuanced, sometimes rather over-saturated looking colour palette, and a reduced sense of detail.

Interestingly, though, the further you move through Breaking Bad’s five seasons, the better the picture quality starts to look, so that by the last couple of seasons you feel much more like you’re watching a native 4K experience.

The reason for this, we imagine, is that unlike House of Cards – which, as noted earlier, was shot using Red 5K digital cameras – Breaking Bad was filmed on 35mm celluloid, a material which can come in different quality grades and which can also degrade over time. So it could be that as the show became successful a higher grade of film was used for the later series, or it could be that the older series’ stock had degraded by the time they got round to scanning it for the new 4K masters, and they didn’t have the time or money to do the remastering necessary to correct the ‘errors’.

Another issue that could be in play here is that shooting on 35mm film tends to deliver a naturally grainier finish – something that makers of gritty shows and films like Breaking Bad often like on an artistic level. Which is fine, of course, except that the more ‘noise’ there is in a source the harder it is for compression engines like the one used by Netflix to compress an image for digital distribution without creating compression artefacts.

One further factor could be that Breaking Bad tends to use brighter photography than House Of Cards, and it’s easier for compression systems to handle darker content. But maybe that one’s a bit of a stretch unless all Netflix’s other home-grown shows turn out to be filmed in particularly low light conditions!

Overall Breaking Bad is still better to watch in 4K than HD – its gritty look is more effective than it is with HD despite the occasional problems it causes the compression engine, and there is palpably more detail to be seen. But its demonstration of 4K’s charms isn’t as ‘in your face’ and instantly impressive as House Of Cards.

Strangely the least impressive of Netflix 4K’s UK wares is the material you might have expected to look the best: the Moving Art nature documentaries. All four look much softer and less detailed than the two TV series, all four suffer with far more obvious compression artefacts, and all four exhibit colour definition far short of the level we’ve come to expect of good 4K, leading to a loss of resolution in very saturated areas of the image like trees, pastures and skies.

There even seem to be some colour errors at times – trailing tones and strange off-key ‘haloes’. At times pictures look more like a 1970s sit com or a low quality NTSC-to-PAL transcode than a pristine 4K image. Weird.