With HomeKit integration, the Netatmo Smart Video Doorbell works well with Apple kit, even ringing your HomePod speakers when someone is at the front door. General performance and video quality are up there with rivals products, too, but the high price and lack of Alexa and Google Assistant support limit its appeal.

Announced back in January 2019, the Netatmo Smart Video Doorbell is finally with us. Rather than simply duplicating the features of other products, the Smart Video Doorbell works with Apple HomeKit and offers subscription-free recording via its integrated microSD card.

A high price and slightly fiddly installation leave it trailing slightly behind some of the competition – and it could do with a few more detection options, too.

A square body and silver and black finish make the Netatmo Smart Video Doorbell one of the best-looking models on the market. It will look as at home on an old house as it will outside a high-end luxury flat.

Measuring only 135 x 45 x 29mm, this doorbell should easily fit on most doorframes. There’s an angle adapter provided in the box, just in case, as well as a larger blanking plate that can be installed to cover up the holes left by a previous doorbell.

Netatmo has made its Smart Video Doorbell wired only. It will work with pretty much all existing transformers from 8V to 32V. You’ll also need a wired chime, and you must install the provided chime module as instructed.

Initially, I installed the doorbell without a chime. There’s no warning in the manual that you must have this – but if you leave it out, the doorbell blows its fuse, and you’ll have to replace it. Luckily, there’s a spare in the box. 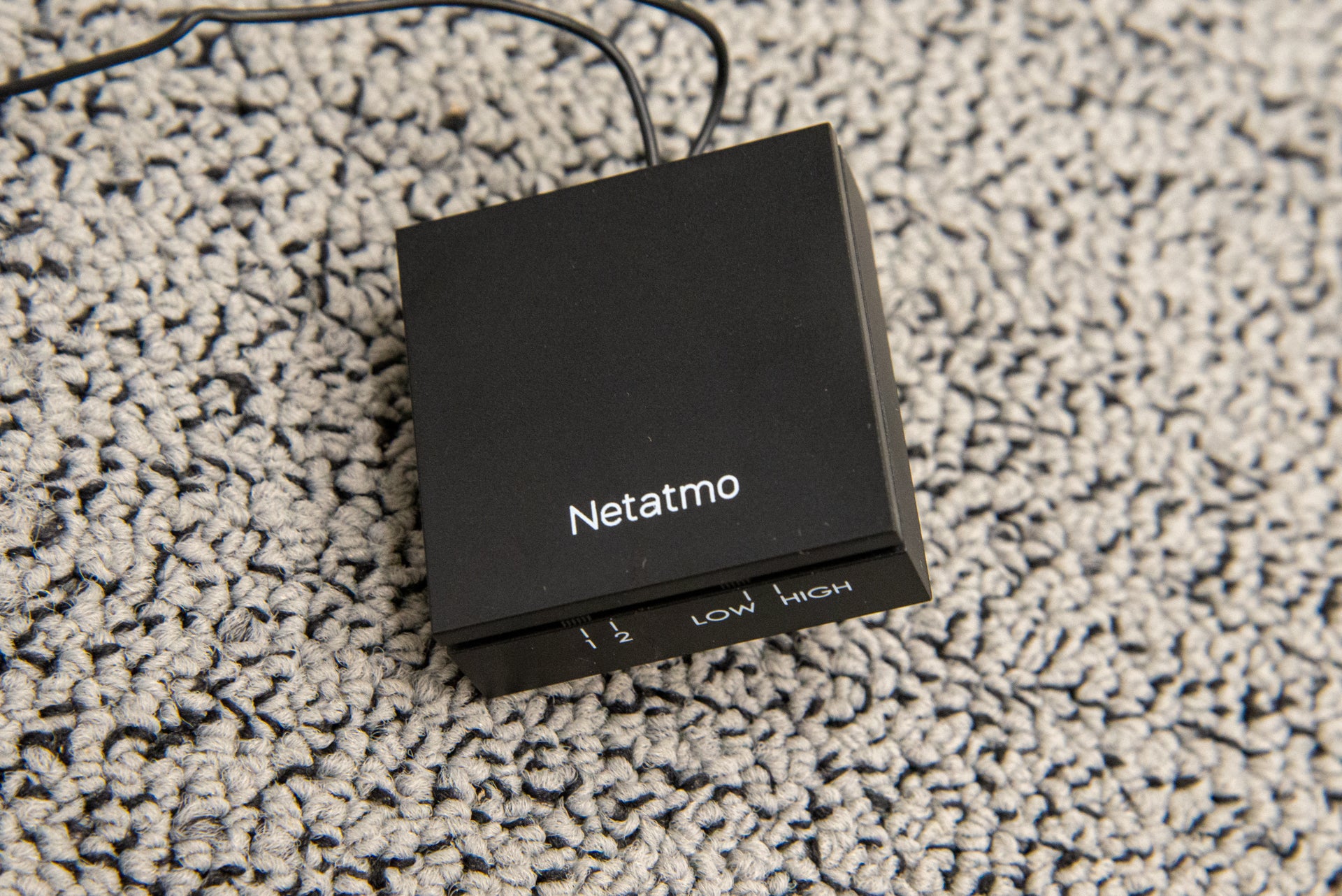 Getting the power cables to the doorbell is a touch fiddly, since they have to be poked through a weather-proof sheathe. This isn’t big enough to accept the spade connectors popular with many doorbells; you’ll need bare wires instead.

Next, you hook up the wires to the connection module, which screws into place on the rear plate. You then clip the doorbell into this and use the retaining screw for security. Most doorbells – smart ones included – tend to have two connectors on the back to which you can quickly attach spade connectors or bare wires. 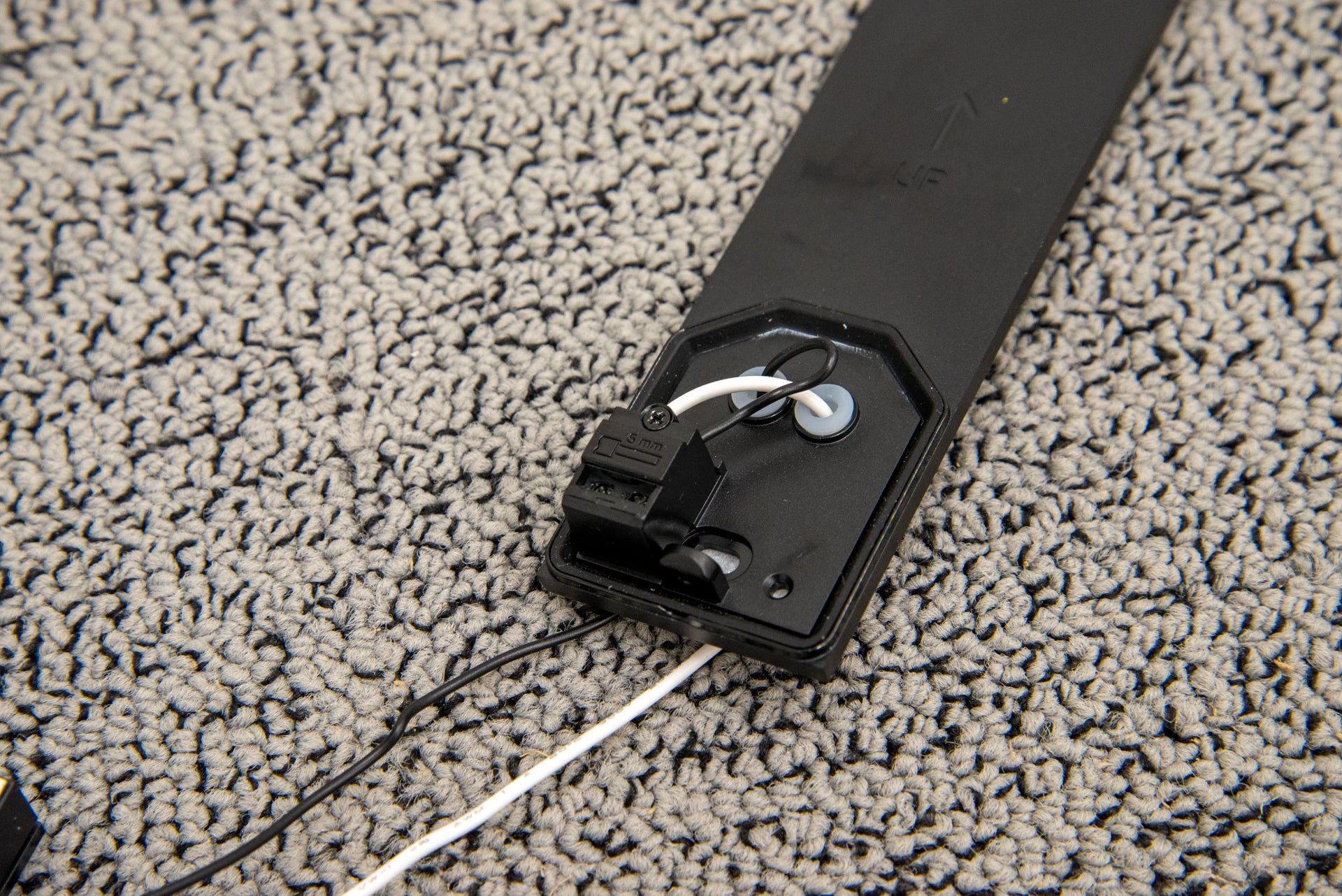 Inside the doorbell, you’ll also find the 16GB microSD card slot, to which the doorbell records video directly.

You have to hook up the doorbell to the Netatmo Security app, although you can also pair it with the Apple Home app using the HomeKit code printed on the back of the manual. You’ll most likely end up needing both apps.

Starting with Home, you can view your camera’s live feed on your phone – and doorbell presses ring both on your phone (or another iOS device) and any HomePod or HomePod Mini speakers in your home. However, you can’t answer through the HomePod. That’s neat – but you can’t configure any of the camera’s advanced settings, or access any recordings. In addition, right now, the Smart Video Doorbell doesn’t support HomeKit Secure Video, so you can’t use Apple’s iCloud storage for security footage.

For that reason, while it’s nice to have a HomeKit-compatible doorbell, you’ll find that you spend far more time in the Netatmo Security app. Open it up and you can swipe between the doorbell and any other camera you have at the bottom of the screen.

Tap the live view button and you can see the livestream from the camera and turn on two-way talk. If you want to view past footage, tap the up arrow to bring up the timeline. This provides thumbnails of events to through which you can scroll. Each day is clearly highlighted, but you can’t jump to a specific date, which can mean a fair amount of scrolling to find the footage you’re after. Netatmo has used this interface for some time now, and it’s really starting to show its age. 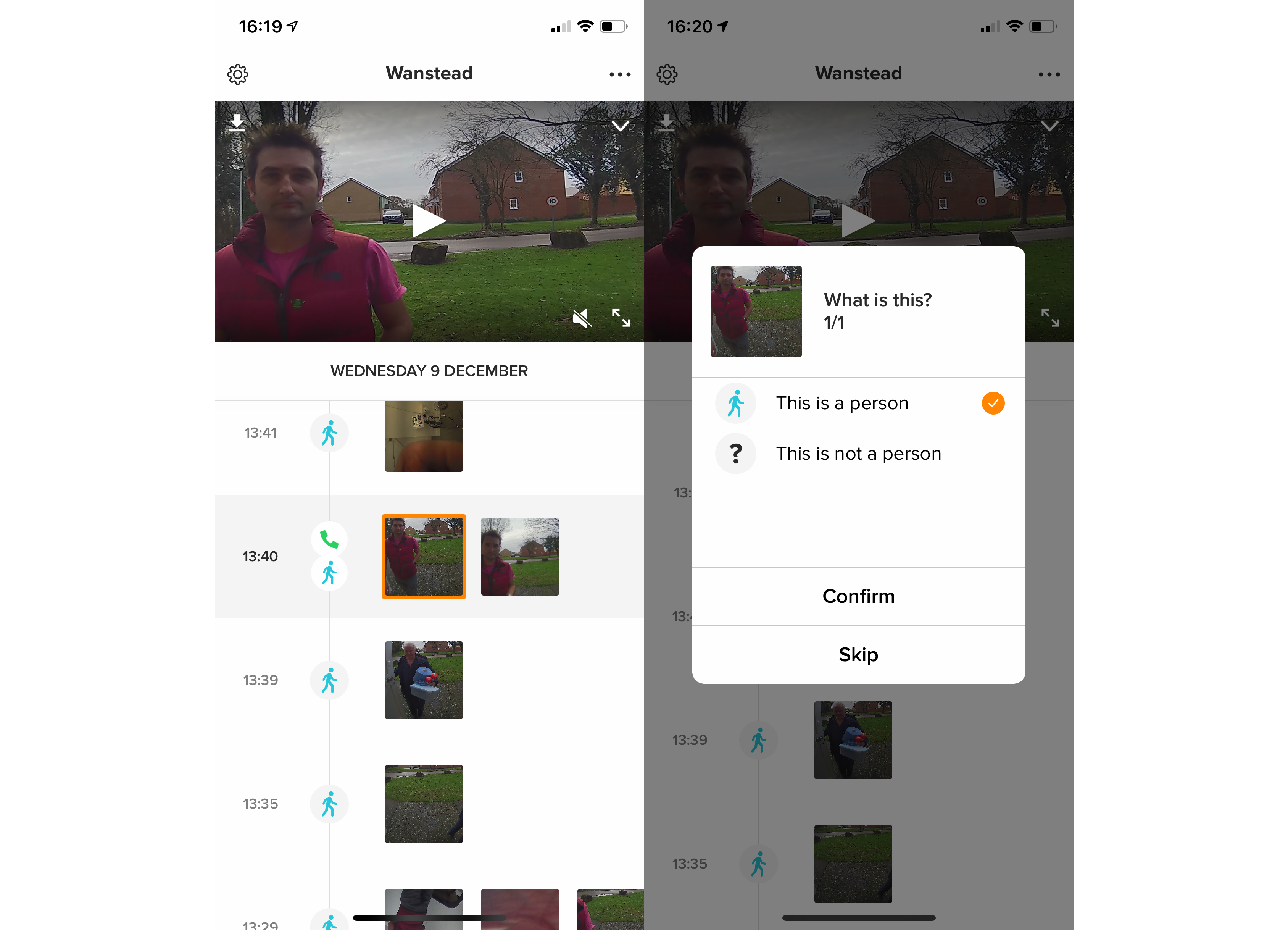 Find the clip you want and you can download it to your phone, saving any evidence or chats that you might want to keep.

Aside from not having any monthly subscription costs, the advantage of using an SD card for recording is that the doorbell can continue to function and save evidence even if your internet connection goes down.

You can also upload footage to an FTP server or Dropbox. While this isn’t as instant a solution as having cloud storage, it at least provides a backup should someone steal your doorbell and the microSD card with all of your footage on it.

By default, the doorbell records motion only when it detects a person, notifying you in the process. You can change the setting to ignore people or just to record them. What you can’t do is instruct the doorbell to record other motion. 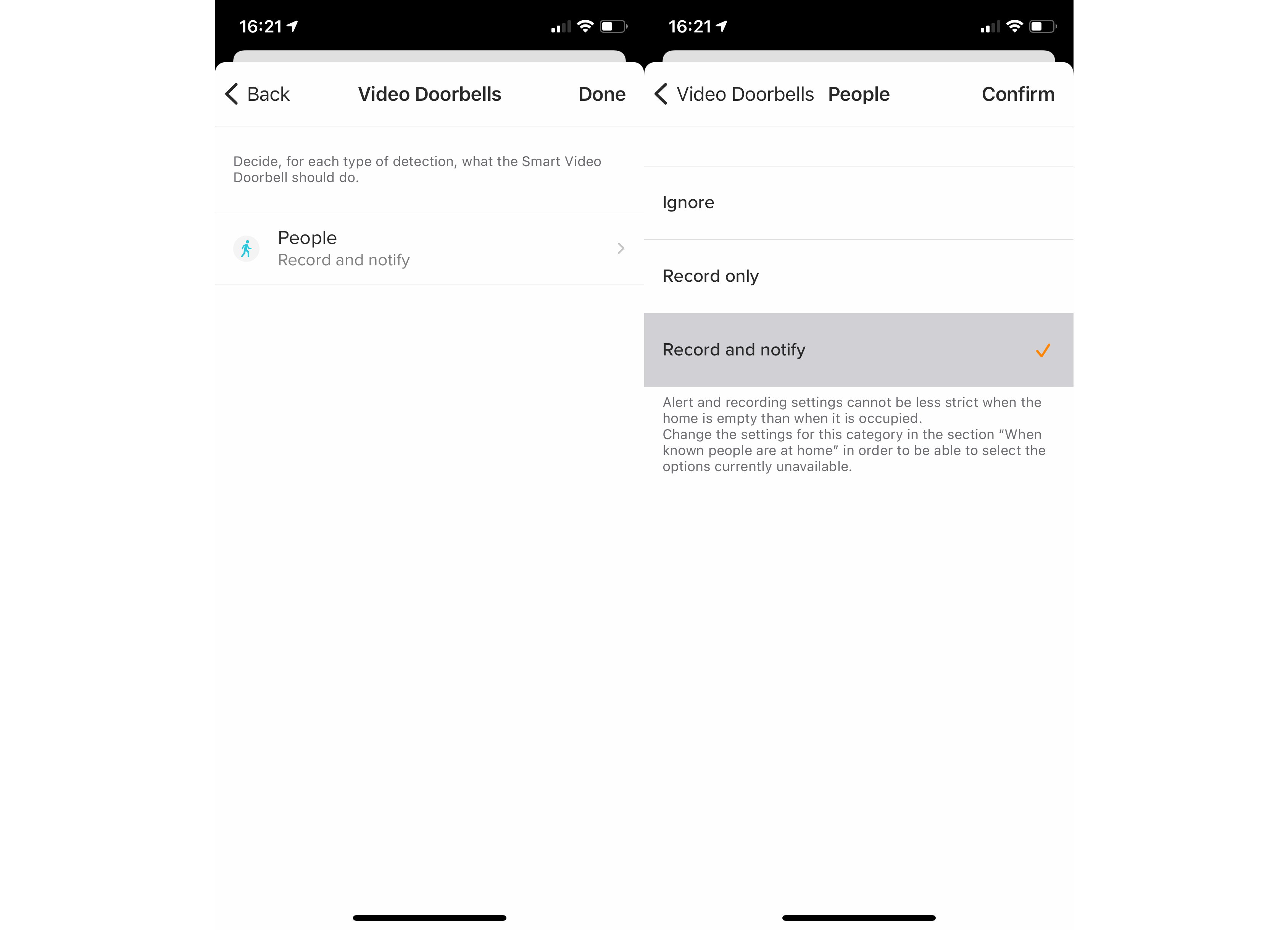 That’s quite limited – I’d have at least expected an option to record all motion, if not more advanced options to spot vehicles and animals.

Still, detection quality is pretty good with only the odd instance when it claimed to have detected someone when nobody was there. Note that you can further reduce notifications and alerts by using activity zones, which involves drawing a box around the area of the footage you want to watch.

When someone presses the doorbell button, your internal chime will ring, but the doorbell stays strangely silent. Given there’s a speaker in it, it would make sense – as an option at least – to play a chime from the doorbell.

Your phone is sent multiple notifications, too. This actually makes sense: a single notification is easy to miss, discarded as a random occurrence. When your phone continues to buzz, you know it’s more important. However, a more elegant solution would be to make your phone ring, as seen with the Arlo Video Doorbell.

Answer the doorbell and you’ll get to see the video stream in portrait mode, matching the doorbell’s native resolution. It’s a good setup, since people are taller than they are wide, so you get to see more of who you’re talking to.

The speaker in the doorbell is loud and clear enough so that you can be heard; the microphone makes it easy to understand what’s being said.

Although Netamo’s other cameras and products are compatible with Alexa and the Google Assistant, the Smart Video Doorbell isn’t right now – although the company plans to add such support soon.

Netatmo has a 1080p video sensor inside, although the camera has a 9:16 aspect ratio: it’s like a TV rotated 90 degrees. This format works well, as you see more of who’s at your front door. And, with a viewing angle of 140-degrees, you can see a fair amount of what’s going on to the sides of the camera, too.

Video quality is decent, comparing well against other 1080p cameras. During the day, the video is well exposed, with a good amount of detail stretching back even into the back of a frame. Close-up, you can make out people’s faces clearly, too. 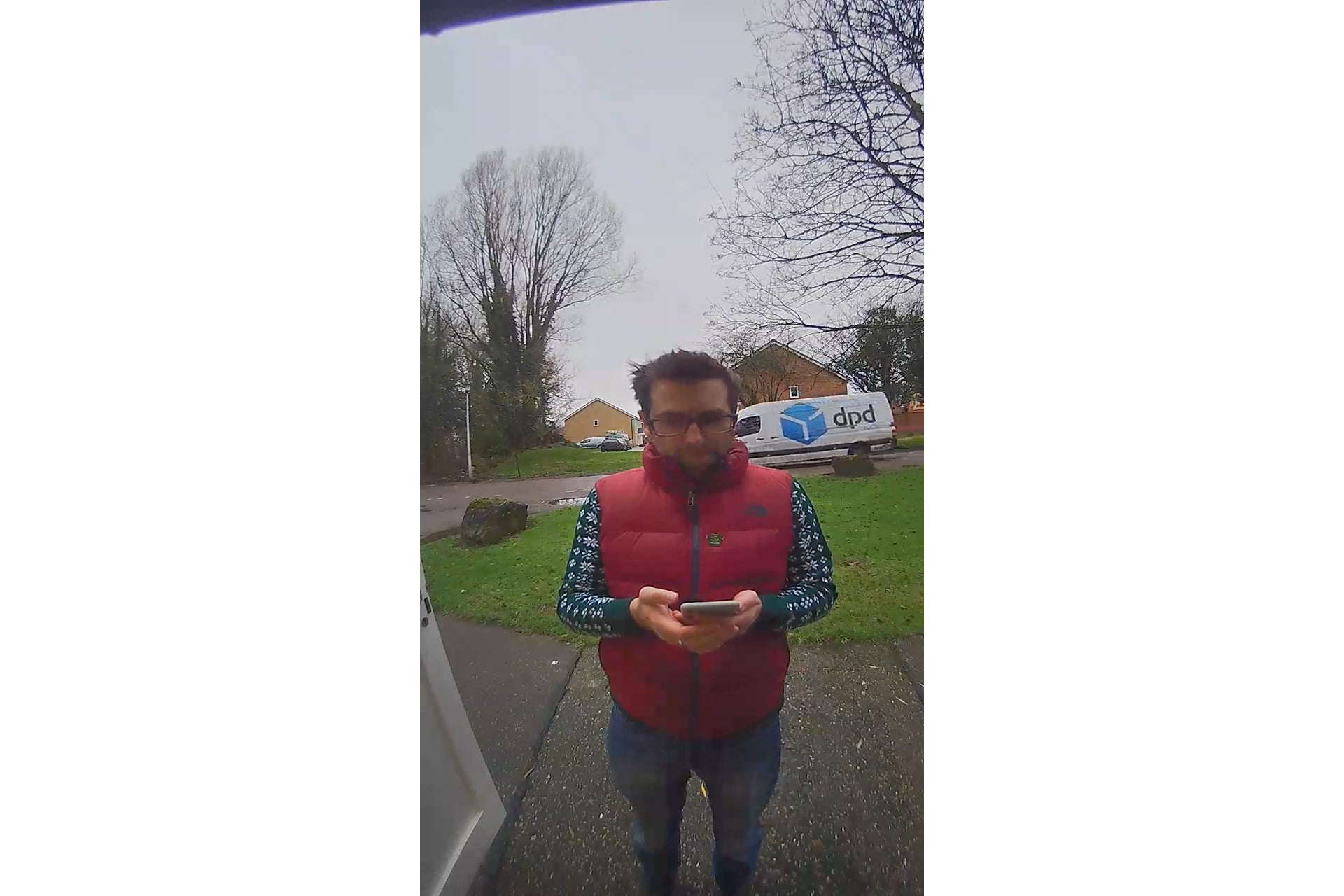 At night, the camera turns on its IR lights to light up the night. People close-up are easy to recognise, but the image does become softer into the background: an issue with all IR modes, to be fair. 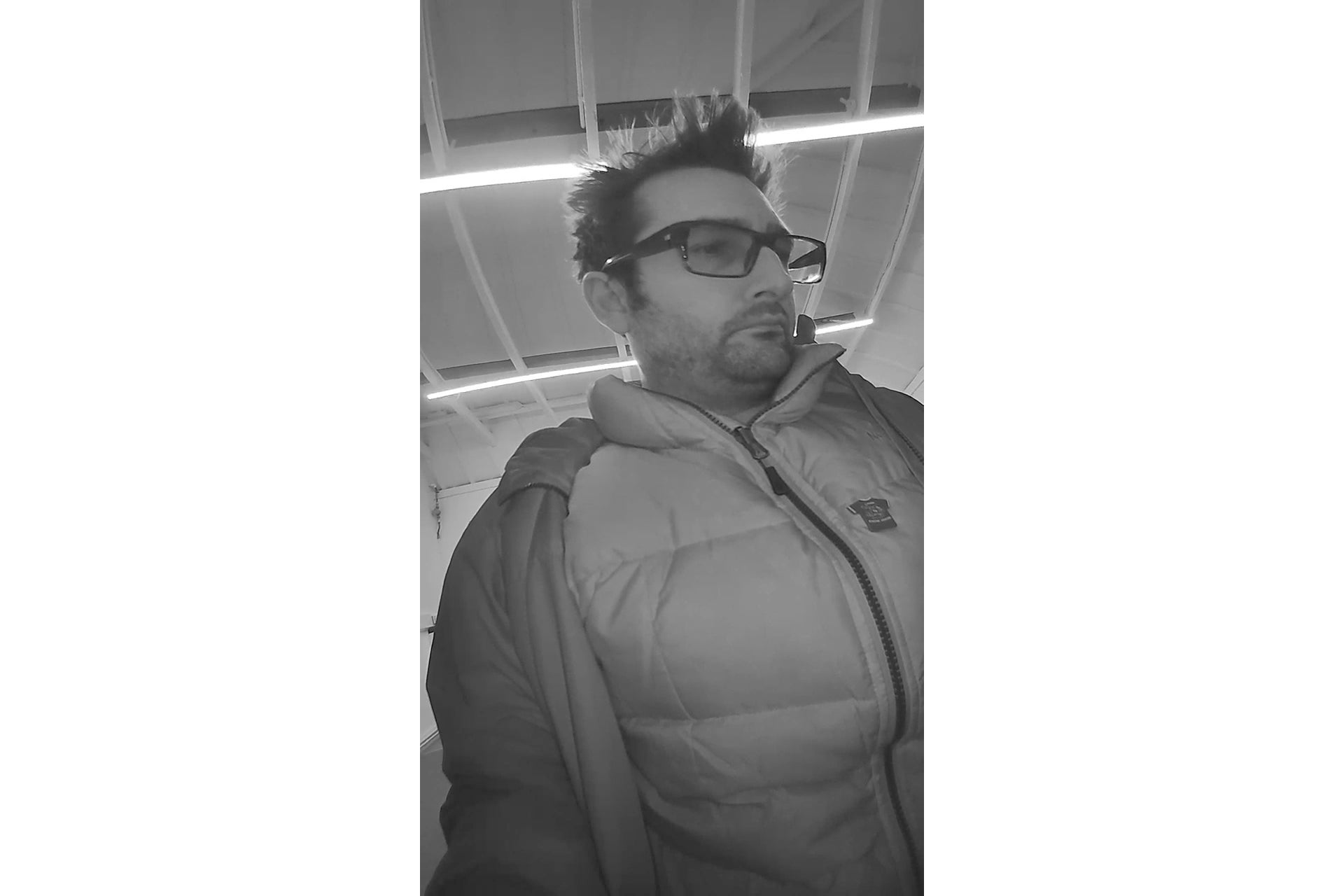 If you’re after a HomeKit-compatible unit, then the Netatmo Smart Video Doorbell will be of interest. However, be aware that integration is basic, and you’ll still require the main Netatmo app to change settings.

Then there’s the issue of price. At £269.99, this doorbell is more expensive than all rivals, more so given that it doesn’t offer a higher resolution. For £90 less you can buy the Arlo Video Doorbell with a 2K resolution, or the Nest Hello, which includes facial recognition and better integration with Google smart speakers. If you don’t want a wired model, then the Eufy Video Doorbell 2K is also subscription-free and comes with a higher resolution, while the Ring Video Doorbell 3 Plus offers cloud storage and works brilliantly with Echo smart speakers.

All of these options are significantly cheaper than the Netatmo Smart Video Doorbell, and as such, there isn’t enough here to justify spending the extra.