With its smart facial recognition, the Netatmo Smart Alarm System With Camera appears to be the alarm system of the future, ditching keypads and keyfobs for automatic arming and disarming. However, the system doesn't work well with guests, makes it hard to arm and disarm the system, is complicated to set up and doesn't give you battery or cellular backup.

While other vendors regularly replace products with updated models, Netatmo has quietly gone about improving and expanding what its existing products can do. Case in point: the Netatmo Smart Alarm System With Camera.

It uses a camera that we first reviewed in 2016 but expands the system into a full alarm system with the addition of Smart Door and Window Sensors and the Smart Indoor Siren.

Facial recognition to automatically turn off the alarm, plus automatic arming sound like features from the future, but the slightly clunky app and inflexible alarm system will have most people looking elsewhere.

Netatmo’s approach to home security is to take its Smart Indoor Camera (previously called the Netatmo Welcome) and turn it into both the hub and main method of deactivating the alarm. The full review of the Netatmo Welcome explains what the camera can do and how it’s built around facial recognition, designed to distinguish between people it knows and those it doesn’t.

What turns the system into a smart alarm is the addition of the Netatmo Smart Door and Window Sensors and the Smart Indoor Alarm. These devices all connect wirelessly to the Smart Indoor Cam, with the Siren providing a 110dB alarm to scare off burglars.

The Smart Door and Window Sensors are there to monitor windows and doors. These chunky smart sensors don’t have the usual magnetic counterpoint of traditional entry sensors and use motion/vibration sensors to detect when a door or window is opened or someone is trying to force entry. 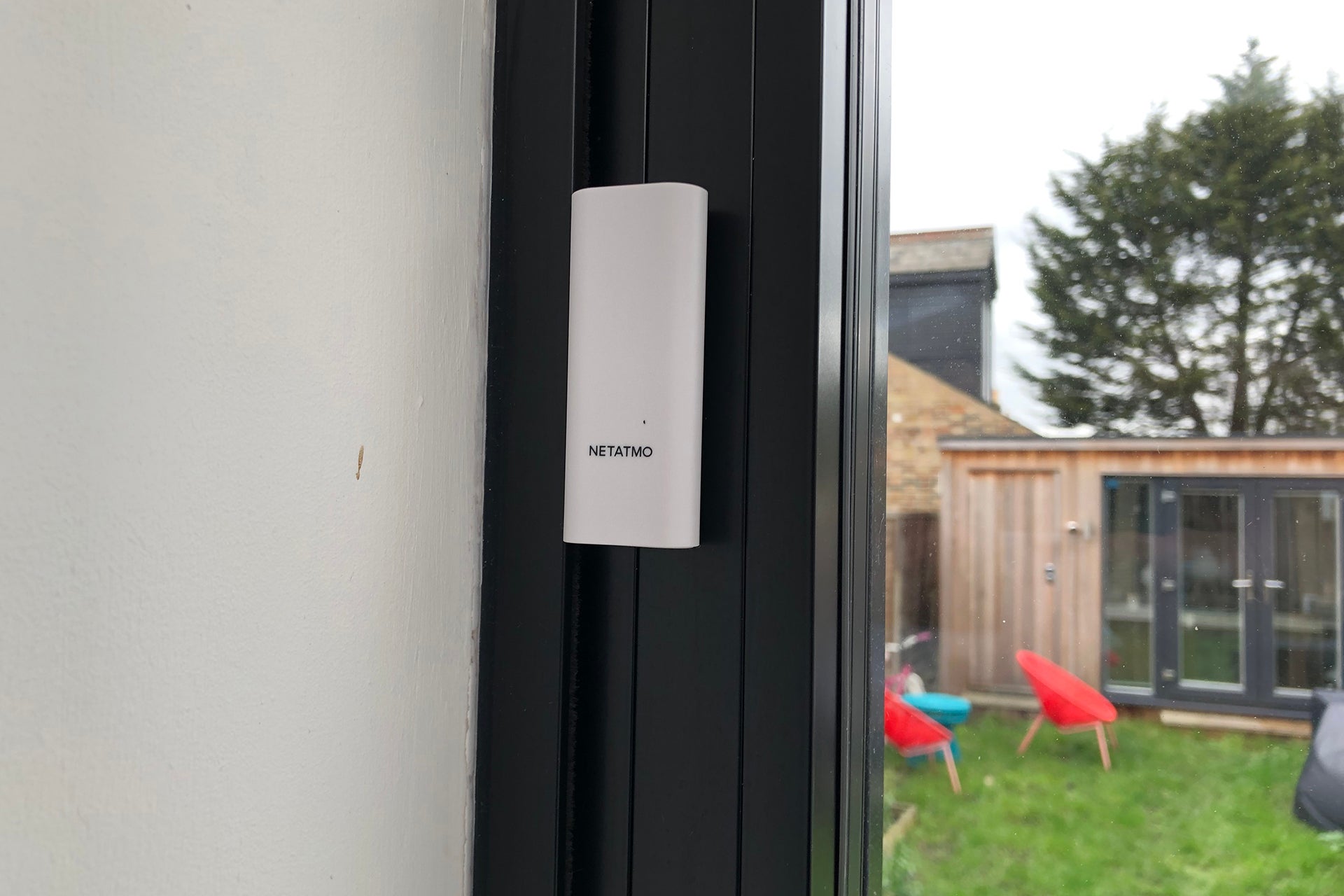 You can add up to 12 sensors per camera, but each one has to be calibrated in the app. This calibration, which is done by long-pressing on the sensor in the app and selecting the calibrate option, helps the sensor work out when it’s open or closed, so you can also get alerts when you’ve left open a door. There are no motion sensors available, which is where the Smart Indoor Camera comes into play, as this can also be used to detect motion.

Getting the alarm system to work the way you want means using the app to control how the two modes work. Netatmo has two modes for its system – When nobody is at home and When known people are at home. Typically, alarm systems have three modes (home, away and disarmed), which gives more flexibility.

For example, you can have a home mode where motion sensors are disabled, so you can walk around your home without setting the alarm off, while still protecting against a break-in.

Netatmo makes configuring each mode complicated, and you can’t choose which devices are operative in each mode. Instead, you can only set settings for all devices of one type. For example, for all sensors, you have to choose for each mode what to do if the activity is detected, choosing from five options: Ignore, Record only, Notify only, Record and notify, and Record, notify and sound the siren. It’s quite a lot to have to understand. 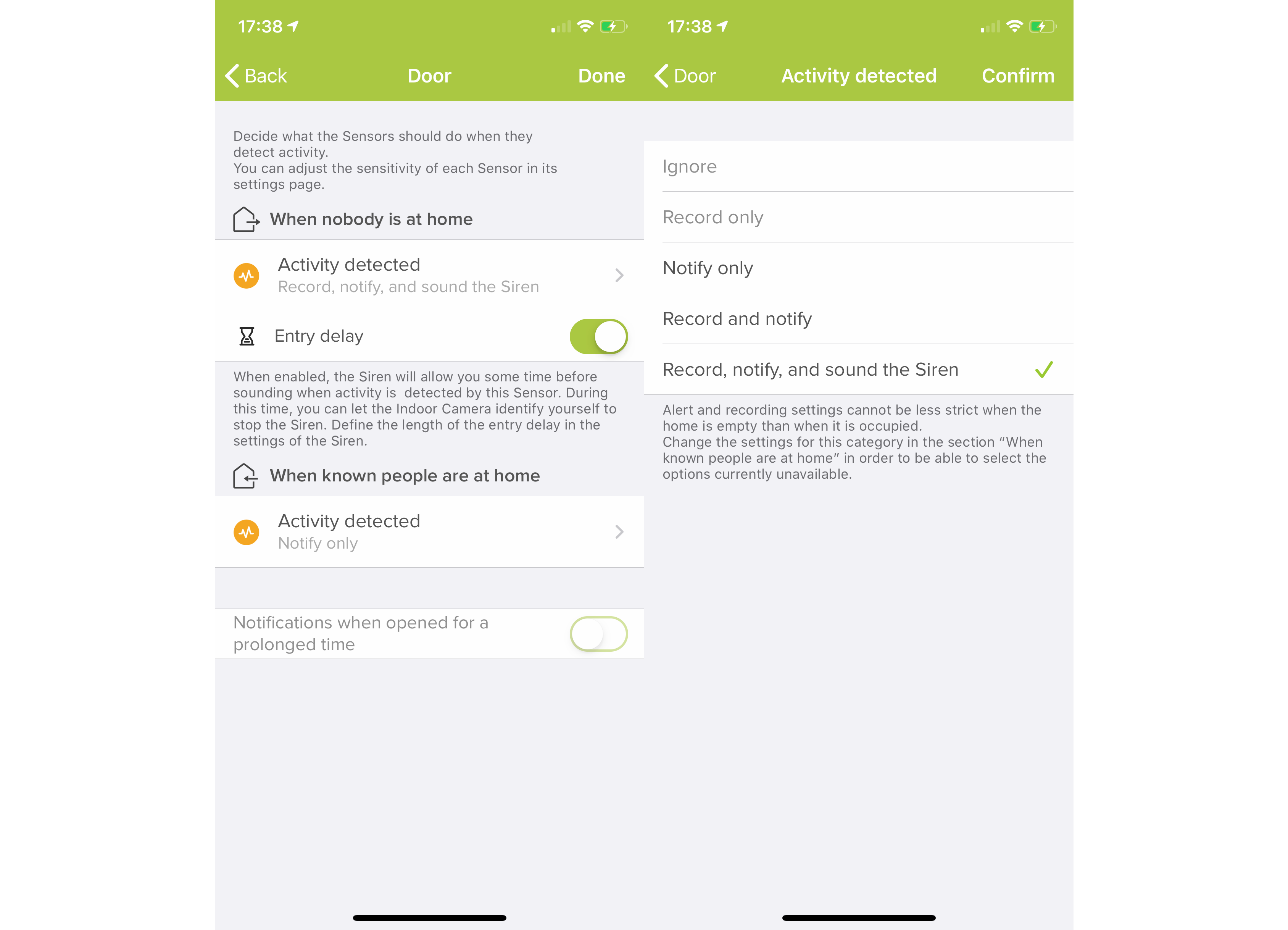 Modes can be quite complicated to configure

Camera are even more complicated, thanks to their object recognition. For each mode, you have to configure how a camera deals with Unknown Faces, People, Animals, Other Motions and Alarms (the camera can ‘hear’ smoke alarms and warn you. The options for each are Ignore, Record only, Record and notify, and Record, notify, and sound the system. That’s a lot of choices to go through. 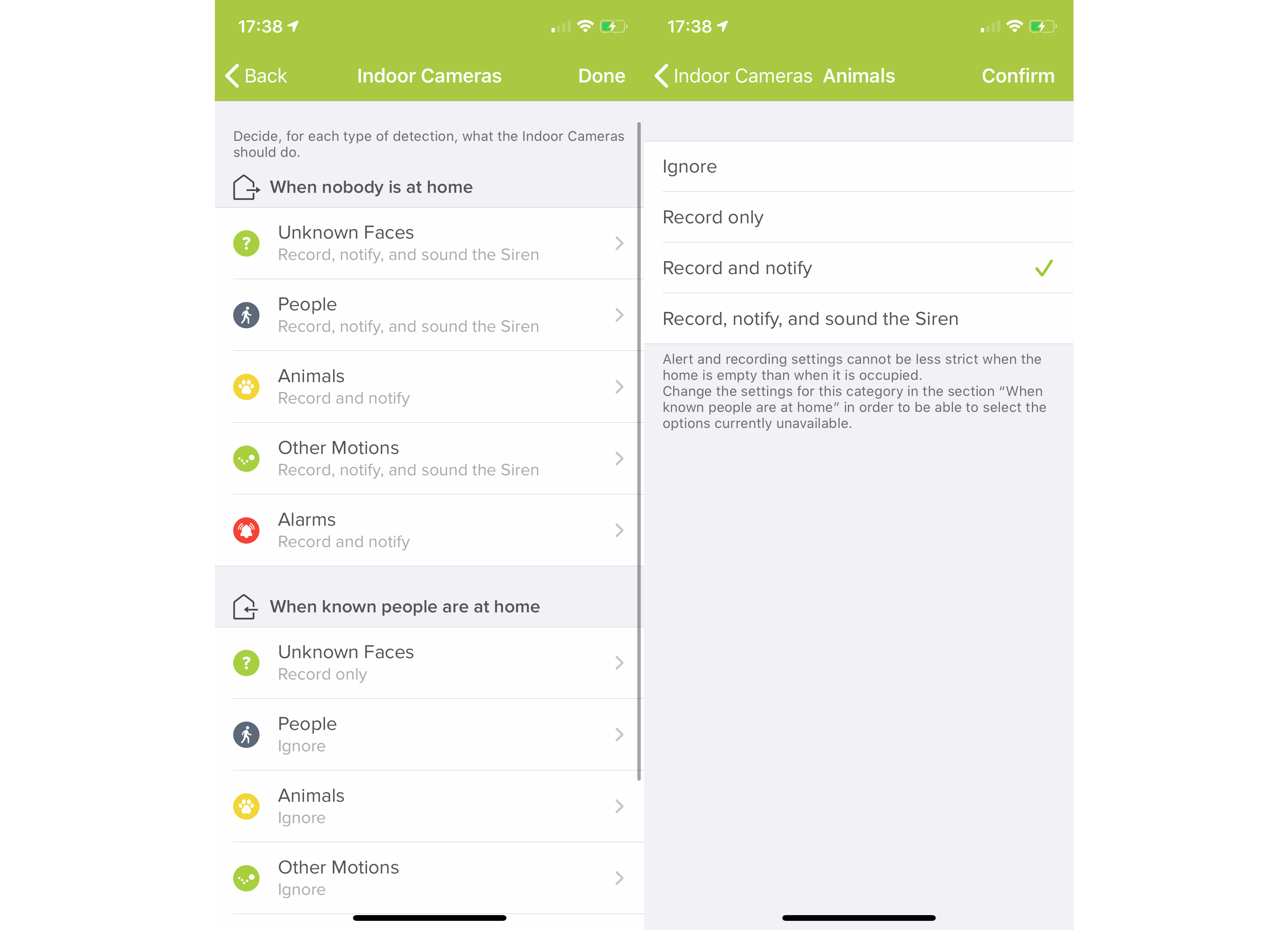 Camera modes are even more complicated

The clunky app doesn’t help either. To get to the mode settings you have to find your siren in the home screen, then long-press it and select the Sound rules option. You can get to the same settings in an entirely different menu in the Settings menu. The Security app has always been a bit clunky, but the more bits are built on top of it, the less cohesive it gets.

The Smart Indoor Camera supports Apple HomeKit via an update (mine would show the video feed but wouldn’t connect to the cloud-based HomeKit Secure Video service), but you can’t use the Apple Home app to manage the alarm system. There’s also no Amazon Alexa or Google Assistant Skill to manage the alarm.

There are no keypads or key fobs to deal with here to set the alarm, as the system is built to use the facial recognition built into the camera. Once the camera has spotted a person, you can save their face to a profile; the more times a face is spotted, the stronger the profile gets. 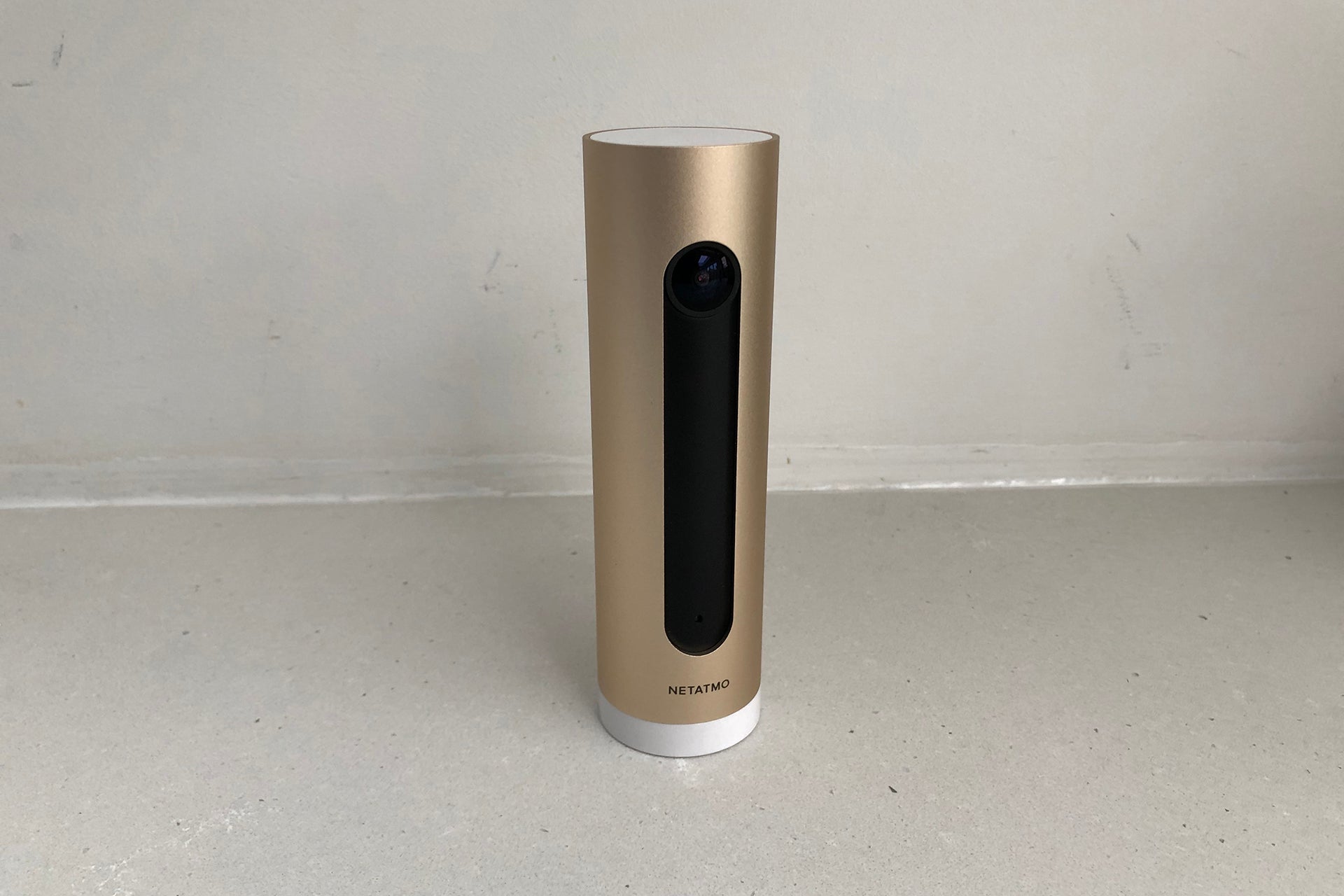 The camera has facial recognition built in

The idea is that facial recognition can then be used to spot who’s at home and who’s not. Spotting who’s in is relatively easy: the camera sees someone it recognises and marks them as at home. Spotting who’s not at home is harder, as the camera can only do this on a delay. By default, the system sets someone as away when the Smart Indoor Camera hasn’t seen them for four hours.

When the camera has marked everybody as away, the alarm moves into away mode, with sensors and the camera armed and ready to set off the siren. That all sounds very clever, but when you go to bed and go to sleep, more than four hours will pass. If you wake up and open a window with a Smart Door and Window Sensor it means that the alarm is triggered. This is why it’s very important to have multiple modes where you can choose which sensors are active in each. 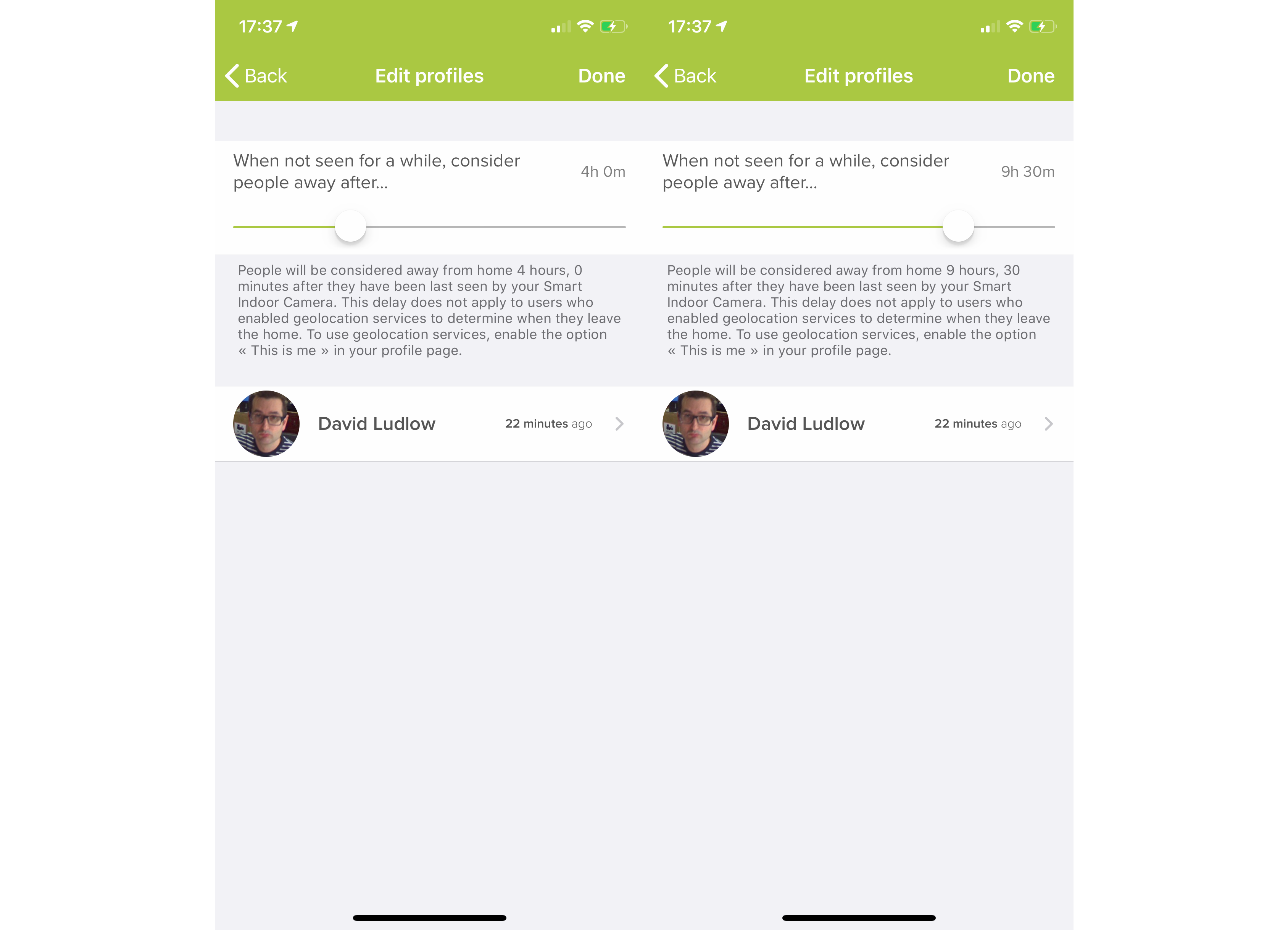 Netatmo lets you adjust the delay before setting someone as away, using between one and 12 hours. That’s not so helpful, as a long delay means that your alarm won’t turn on automatically for a long time, and a short delay risks that you accidentally trigger the alarm. It’s better to manually arm the system by telling the Security app that everyone has left the home. It’s frustrating that you have to use the app to set the alarm like this, and a control panel or key fob would be far easier to use.

When the Smart Indoor Camera spots somebody that it knows the alarm is disarmed automatically, which all sounds very futuristic and clever, but the reality can be more frustrating. First, Netatmo warns you that you should only have the siren set to go off when you’ve got ‘strong’ profiles for your homeowners. The only way to improve the quality of profiles is to let the camera see people lots of times, which can take days to accumulate enough data. In other words, don’t plan to use your alarm for a while. 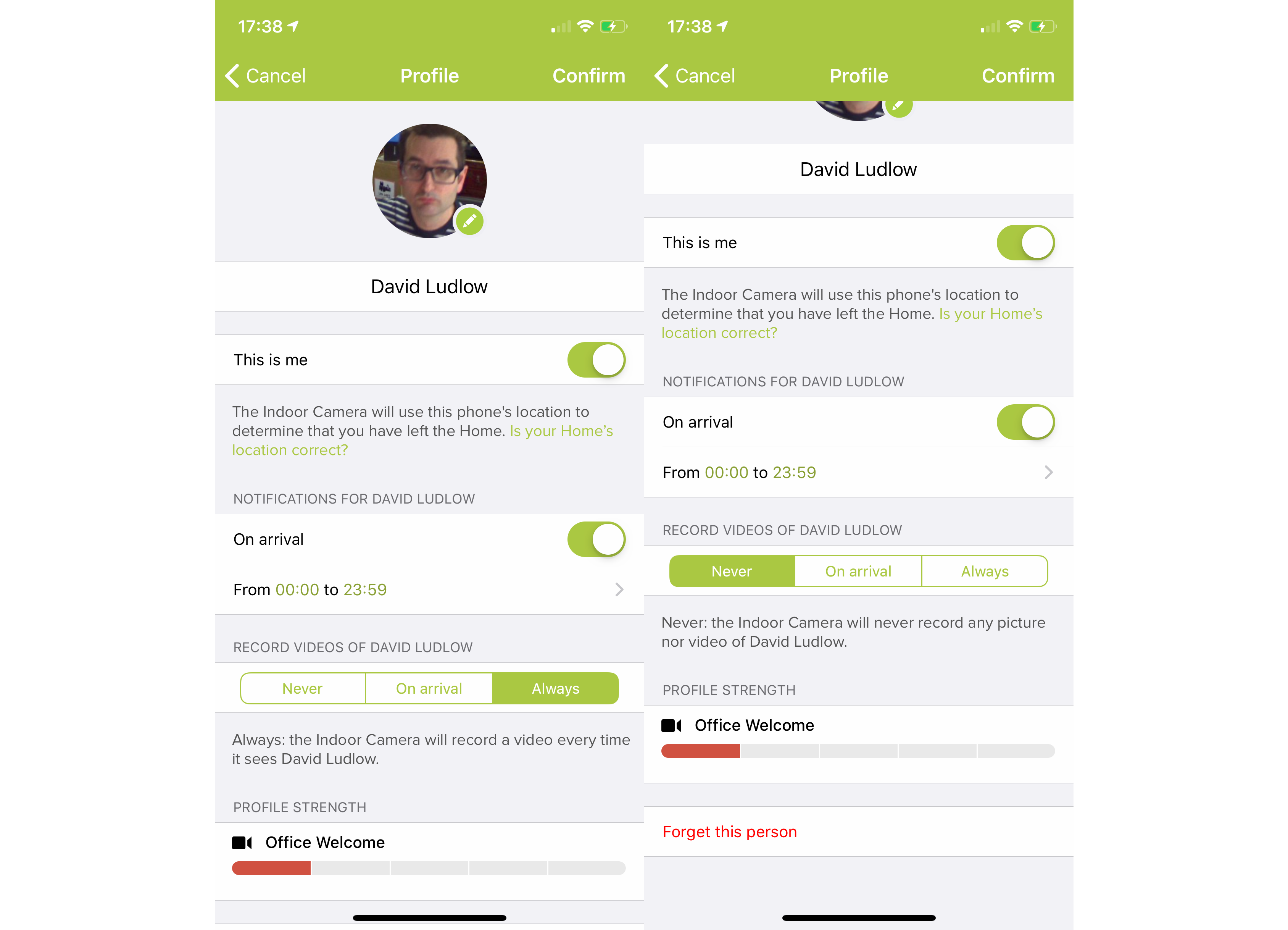 When the system is trained it works well, with the Smart Indoor Cam quickly spotting friends and turning on the alarm. For strangers or where a sensor has been triggered, the siren goes off. It’s piercingly loud, and certainly calls attention.

Yet, it highlights another problem with the system. If you have someone go into your home that the Smart Indoor Camera doesn’t recognise, such as friend or cleaner, the alarm goes off and you get a notification via the app. You’d think that silencing the siren would sort out the problem, but it doesn’t: as soon as the camera spots the unknown person again, the Siren is triggered. The only way to turn the alarm off is to select a known person’s profile and falsely mark them as being at home. You can silence the alarm from the app

Of course, you can share your Netatmo account with someone else, so that they can do this themselves, but it’s not particularly convenient. This just highlights why it’s so important for any alarm system to have some kind of proper override mechanism and an easier way of sharing access to your home.

If your internet connection goes down, then the alarm system will still work, although you’ve got no way of turning it off (or setting it) via the app, and there’s no cellular backup. If the power goes down, the system goes down as the camera doesn’t have battery backup.

Should you buy the Netatmo Smart Alarm System With Camera?

If you’ve already got a Netatmo Smart Indoor Camera, you can expand it to an alarm for £69.99 for the Siren and £89.99 for a three-pack of sensors. For smaller properties, that’s not terrible value. If you want the system outright, then you can buy the camera, siren and sensors for £319.99, at which point you’re better off looking at the competition.

Opt for the Ring Alarm, and you can buy a starter system for £249.99, complete with a control panel for arming and disarming the system. Add in Ring’s cameras, and you get a system that can turn cameras on and off based on the alarm mode, helping to boost privacy. And, pay for Ring Protect Plus and you get assisted monitoring and cellular backup for better privacy.

The Netatmo Smart Alarm System With Camera is a nice idea and I love the idea of an alarm system that can arm and disarm automatically, but this system is far too limited and fiddly to use to make it a serious competitor to a traditional smart alarm system.