Aimed at an audience seeking a more accurate and powerful way to send non-expanding foam flying, the Zeus MXV-1200 is part of the new Rival range from Hasbro. Unlike past blasters, the Rival Zeus looks like it means business: the luminous shades on the outer casing are out; and incoming are projectiles in spherical form. More serious fun is implied in every way.

My ownership of NERF blasters has always been a cyclical affair. When a new line is released, I’ll add one or more to my collection of around ten and nudge the outgoing older models in the direction of the first neighbour I see.

Initially they thought this odd, but how things have changed. When the Zeus arrived this week, I had to pick up the missed delivery from next door, who upon collection said: “I’ve been hoping we were getting a Rival next, they look pretty good”.

From the box design alone you sense you’re in new NERF territory, with bright yellow spheres poking out through the blister pack.

Inside you’ll find a couple of tactical rails, a magazine and 12 rounds of foam. Since the Zeus is battery operated, you’ll need to shell out for six C-type cells. Don’t be tempted to save a few quid on own brand; they need to be copper-topped, ultra-powered units. 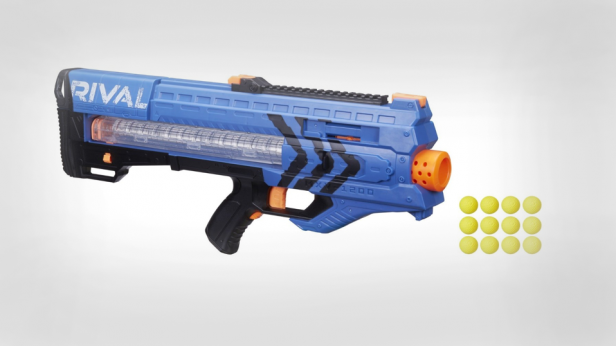 With the power cylinders all loaded up, my initial concern was that the added weight might detract from how it felt in the hand. In fact, it made the blaster feel more solid, and although my grip on it had to be increased, this felt like a positive.

The bulkier barrel on the Zeus, at the rear in particular, is necessary since the Rival range contains larger air chambers from which it unleashes a higher FPS (feet per second) rate upon the projectile.

When it comes to loading up the magazine of this NERF, begin with those spheres on a flat surface. Then simply pop the magazine over each one at speed for quick collection in the spring-loaded chamber. Speed is of the essence here, since the rate at which the Zeus can blast the spheres back out means this action will be repeated with regularity.

The loaded magazine holds 12 rounds and fits snugly into its allocated space, a reassuring click denoting that it’s in the correct position. The slight downside is that the necessary inclusion of a clip at the rear to keep it in place makes one-handed removal and reload virtually impossible.

This won’t be a major issue for many, but if you’re in the midst of a melee you might need to consider packing a back-up blaster.

Using a semi-automatic, auto-feed operation the Zeus needs powering up to fill that expanded air chamber. Although this operation takes no time at all, the associated noise means that sneak attacks won’t be possible. 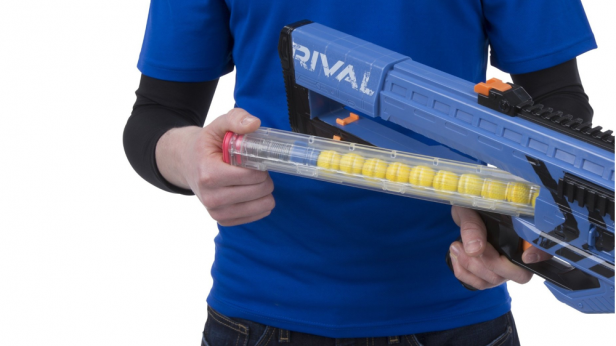 Finally, it’s time to blast. Hold the power button just under the trigger momentarily, find a target to lock onto and squeeze. Immediately I could feel the power difference versus any other (unmodified) NERF I’ve used. The ammo chamber was depleted in a matter of seconds, and to an impressive distance.

What did become apparent is that, while with a dart-firing blaster you may use some trajectory to achieve a distance hit, with the Zeus you aim directly at the target.

In terms of unleashing the ammo, it’s possible to fire off four spheres per second with ease and, importantly, after multiple uses I experienced not a single jam in the firing chamber.

Distance-wise, by holding the Zeus horizontally – and with no wind – I was achieving 75-80ft every time. The manufacturer claims its yellow spheres can travel a headline-grabbing 100 feet per second, which is approaching 70mph; I remain sceptical.

Impressively, though, I measured instances of 90 feet per second, which is well over 60mph; opponents will be in no doubt that a direct hit has been achieved. That said, it is possible to achieve indirect hits, since the shape of the ammo allows you to take trick shots against a wall or ceiling to reach your target. 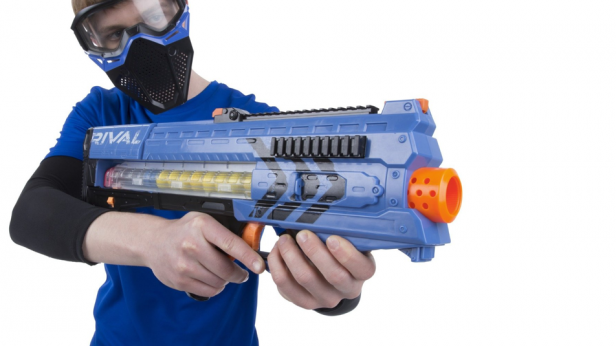 Despite the £65 price, which is likely to reduce in the coming months, yes, you should. As an early adopter of the latest NERF technology, you’ll be able to use this blaster in ways that just isn’t possible with the dart-firing models.

Comparing the price of this unit to those in the higher-priced NERF Elite range still feels like you’re getting much more here. I’d advise investing in an additional magazine (£18), though, which comes with a further 18 rounds.

Will the NERF Rival Zeus be making its way round to my neighbour any time soon? No chance.

The Rival range makes some lofty claims – thankfully, the Zeus delivers in a well above satisfactory fashion on all counts.