What is the NERF Rival Khaos MXVI 4000 Blaster?

If you only know NERF from its mega-popular dart-firing blasters, then the massive Khaos might come as a bit of a shock. This fully automatic beast is part of the Rival range, designed for teenage kids and adults to get their foam-popping fun to the max. It’s a serious step up in performance – as well as size and cost. 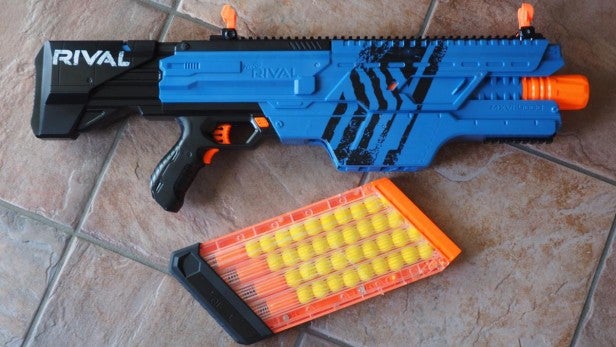 This thing is blinkin’ huge! Seriously, take note of the age recommendation on this one, as younger kids will struggle to carry it around for any length of time.

The Khaos comes out of the box pretty much complete. You need to load and pop in the magazine, but that doesn’t really count as assembly. What you do need to do is add batteries – six big, expensive D cells to be precise. 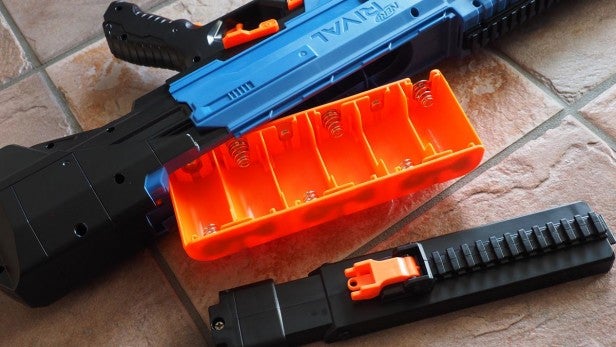 There’s a section of the top that comes away on undoing a single cross-head screw, and it reveals a pull-out battery carrier. The reason for the carrier is that you can get rid of that altogether and replace it with NERF’s optional rechargeable battery pack – not available in the UK, but you can always import one.

Even without the mag inserted, the Khaos is a sizeable monster, but one that feels solid; it has a decent shoulder stock to help steady its bulk as you shoot.

As with all the Rival range, you get the choice of a red or blue colour scheme, which can be used to show which side you’re on.

The grip, in usual Rival style, is comfortable whether you have big hands or small. With this being a motorised, flywheel-powered blaster, you get NERF’s usual two triggers – the lower one is held in with your middle finger to activate the motor before you pull the main trigger to fire. 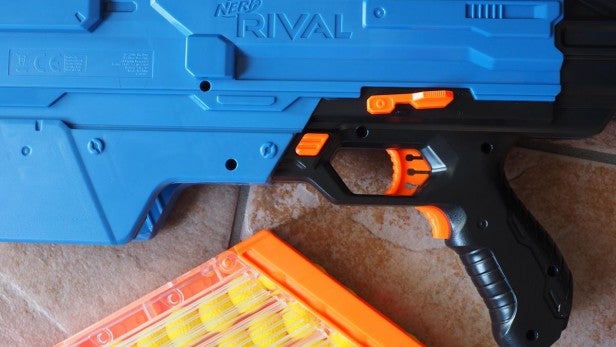 There’s a lever-style safety catch on the left side – perfect for the thumb of right-handed folk, but not great for lefties – that locks both triggers. Thankfully, the mag release is ambidextrous, with a button on each side, just ahead of the safety.

The magazine itself is huge. In fairness, it has a capacity of 40 rounds, but sheesh… And it seems overly complicated, too. There are four tubes within it, each for 10 rounds, and a spring lock per tube that all need sliding down and across when you load.

Slap the mag in and the Khaos really is such a beast that it’s surprising it doesn’t have any sling points for attaching a shoulder strap. Bit of a design fail.

It does have plenty of accessory rail space, though, with one rail running along most of the top, and a shorter one underneath at the front. There’s a pair of flip-up open sights rounding off the Khaos’ features.

Loading the Khaos’ mag isn’t as straightforward as you might hope. With the tubular magazines on the Rival Zeus, Apollo and Atlas, you just push the rounds in the top until the tube is full. Not so here. 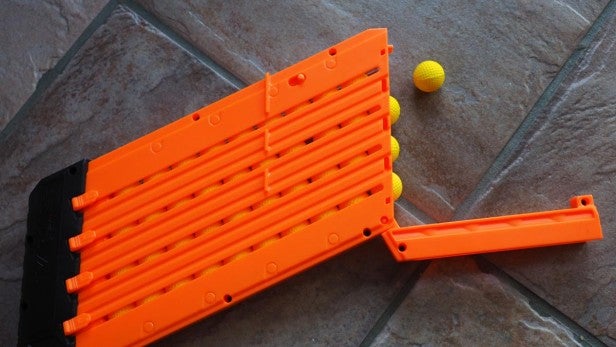 Each tube within the magazine has a spring lock, and you have to slide all four of these down and across before you start loading. You then have to pop a little catch to be able to lift the top off the mag to get access to the tubes. It all takes a little longer than it should, but at least you get an impressive 40 shots before you need to fill up again.

Fitting the mag back into the Khaos isn’t as easy as it should be, either, since it requires quite precise alignment or you’re just standing there bashing one big plastic thing against another big plastic thing.

With that done, though, there’s little to complain about in terms of the Khaos’ performance. It’s as accurate and powerful as the other Rival models – so very much more accurate and powerful than a NERF dart blaster, in other words, with the ammo flinging out at an average speed of around 100fps.

The golf-ball-shaped foam rounds keep a much tighter spread than NERF darts, fire farther, and hold a flatter trajectory that makes for better long-range skirmishes.

The motor whirr when you hold down the priming trigger is quite loud – this ain’t no stealth option such as the spring-powered Rival Artemis and Apollo – but the benefit is, of course, fully automatic firing. Keep the main trigger depressed and you can pop out 3.5 rounds per second. Nice.

Just a quick word on the flip-up sights: they’re pointless. Unless you count their point as being just to make the Khaos look cooler. They’re set up to aim way too high above where the Khaos actually fires, so I’d just leave them down and forget they ever existed. 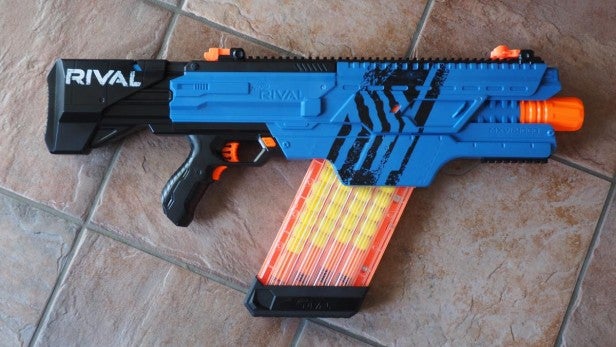 Should I buy the NERF Rival Khaos MXVI 4000 Blaster?

With the Rival Khaos, you get a huge boost in ammo capacity over the Rival Zeus, plus the move from semi-auto to fully automatic. It’s a whole lot of fun, in spite of the frustrating magazine design.

If you fancy an automatic Rival-series blaster and can justify the extra cost, the forthcoming Rival Nemesis appears to be a better bet, though. It has an easy-fill 100-round hopper feed, but similar weight and bulk to the Khaos.

A fun full-auto Rival blaster, but the fiddly mag system is a little frustrating.