What is the NERF Rival Artemis XVII-3000?

The Artemis sits right in the middle of NERF’s Rival range, which caters for foam-popping veterans in their teens or later. It’s a spring-powered, pump-action blaster with capacity for 30 of the golf-ball-shaped Rival rounds.

The Rival Artemis is an ideal introduction to this more advanced blaster series, and offers decent value for money. Oh, and it’s a ton of fun, too.

The Rival Artemis comes out of the box completely assembled, and because it’s spring-powered there isn’t even the need to add batteries. Just load up and go.

It’s a funny-looking thing, but also very funky in its own way. Stubby and fat, with a fat priming handle at the front for the pump-action cocking. The whole thing feels very solid, more robust than NERF’s dart blasters, and that’s just as well considering the teenagers and, ahem, big kids who’ll be using it.

As with all Rival models, the Artemis is available in a choice of red or blue, with the intention being that your weapon’s colour denotes which side you’re on. It’s quite a nice idea as long as you’re always on the same side – otherwise you’ll need to buy one in each colour, eh? 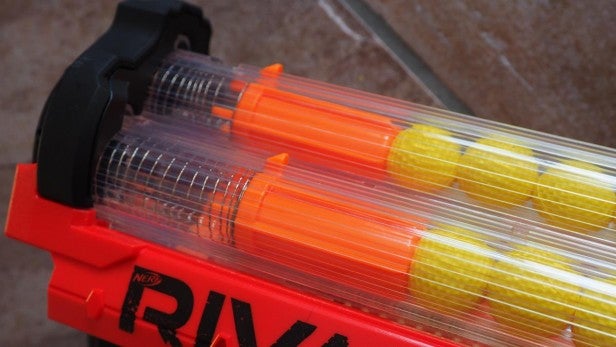 Across the top are three clear plastic tubes that carry the ammo, and they’re accessed by sliding back a section of the blaster that covers the loading chamber. Sliding this part back also compresses the springs that keep the Rival rounds feeding into the action.

The grip is a good size and comfortable shape, regardless of how big your hands are, and it has an ambidextrous two-way-push safety catch within easy reach. If you’re right-handed, it’s thumb for safety on, then side of index finger to push it back off from the other side.

Each time you prime the Artemis, there are four short ‘barrels’ that rotate on the front, which doesn’t seem to serve any purpose, but looks fun. There’s also a small indicator on the side of the action to check whether the blaster’s cocked or not, but it’s unlikely you’ll ever use it. 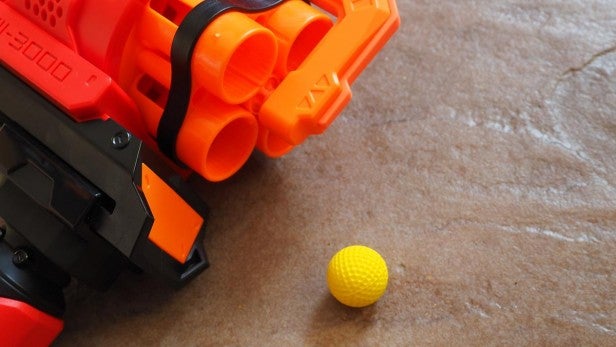 For accessories, there’s just a single rail along the top. The Rival rails look like a standard ‘Picatinny’ rail, as used on real firearms, but they’re actually a different size. Some non-NERF accessories will fit, but it’s a case of trial and error. Sadly the official NERF Rival accessories lineup currently only consists of a red-dot sight and a combined flashlight and grip.

A couple of sling points are provided at the back, which means you’ll have to carry the Artemis barrel-down if you want to stick a shoulder strap on it.

Loading with those little foam golf balls really is so simple on the Rival Artemis. Just slide that top section back, and start popping 10 rounds into each of the tubes until you’ve got your full complement of 30, then slide the cover forward again. Done. 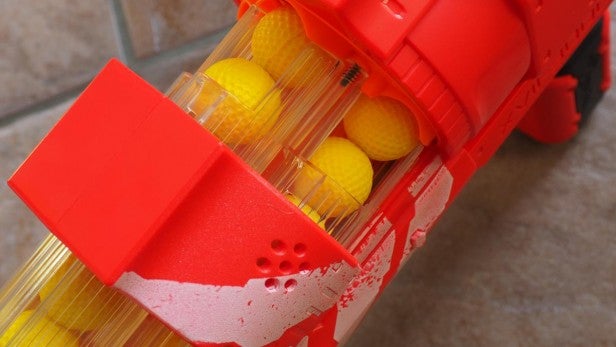 Pump the priming handle back all the way and then forward again, and you’re ready to fire – if the safety’s off, of course.

The speed and accuracy with which the Rival rounds pop out is going to be quite a revelation if this is your first step up from NERF’s dart-firing blasters. From 10 feet away you can group your shots within inches rather than feet, and the rounds ping around the place so there’s the added possibility of getting hit by a ricochet.

Range is also increased over the darts and trajectory is flatter. This means firefights across larger spaces are a whole lot more fun – no need to aim several feet above someone’s head and hope the shot will arc down in the right place like an arrow from a longbow. It’s amazing that Hasbro still hasn’t released a Rival sniper rifle just for the hell of it.

Another thing you’ll notice if you’ve upgraded from a NERF dart blaster is that Rival rounds just don’t seem to jam. I’ve not had a single one jam ever. These foam balls are really durable, too.

Sure, you don’t get rapid automatic firing from a springer like this one, but to counter that you don’t have to worry about motor whirr giving away your position. This is the stealthy option.

My only real criticism of the Artemis is that, because of the force required to pump the priming handle back and forth, there would ideally be a shoulder stock to help stabilise it. Sadly the Rival series doesn’t yet cater for adding stocks in the same way that many of the N-Strike dart blasters do – although a quick web search will point you in the direction of a 3D-printed aftermarket adapter. 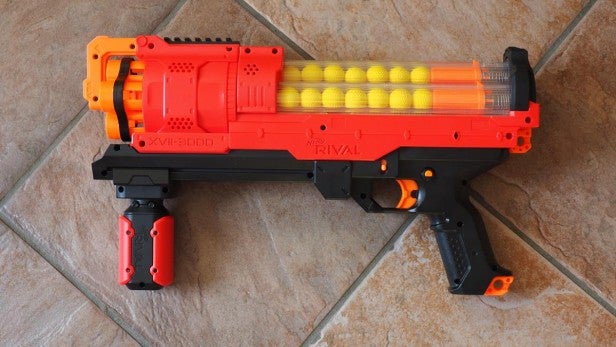 Should I buy the  NERF Rival Artemis XVII-3000?

The Artemis is a solid spring-powered blaster, and a great way to get into the joys of NERF’s Rival series. There’s no worrying about eating through expensive batteries and fumbling with fiddly magazine systems like there is with the Rival Khaos and Rival Zeus, yet it’s almost as compact as the Rival Apollo and Rival Atlas, and has better ammo capacity than both.

This is probably the sweet spot in the Rival range right now, and certainly the best option for the stealthy approach, thanks to its lack of motor noise.

A brilliant all-round blaster that serves as a perfect introduction to NERF’s impressive Rival series.