What is the NERF Mega Mastodon?

You want the biggest, baddest NERF gun, eh? And something mobile, not a tripod-mounted millstone like the Elite Rhino-Fire? Got it. Oh, and standard-size darts are for wimps and wannabe sniper weirdos? Right.

The Mastodon is a fully automatic beast of a NERF blaster, phut-phutting three darts per second from its 24-round rotary cylinder. And not just any darts, but NERF’s oversized Mega darts, which hit harder and whistle as they fly. A shoulder strap means that, even though the Mastodon is massive, it can be carried around even by NERF warriors at the younger end of its eight-plus age recommendation. 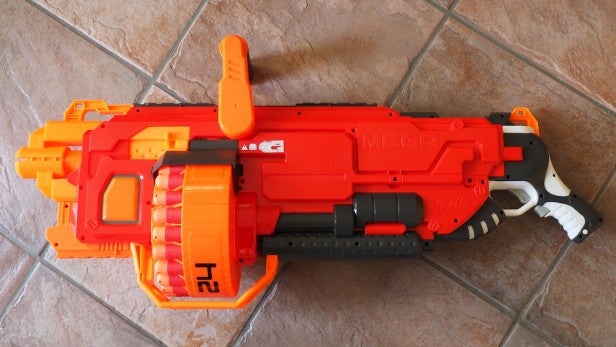 This thing is big… Seriously, photos don’t really do it justice. Pulling it out of the box, the main part of the gun is already in one (huge) piece. However, the Mastodon does require more assembly – probably by an adult – than any other NERF blaster I can recall.

First, the non-removable revolving cylinder needs to be put together. It’s in three parts, which each slide on until they’ve locked in place to form a complete circle. Then a protective cage clicks into four holes beneath – this stops the cylinder from becoming damaged if you place the Mastodon on the ground. Two dark-grey canopies click in, just above either side of the cylinder, completing the dart feed. I’m not certain what the point of those two bits is, but the overall look is purposeful.

To help carry this battery-powered behemoth, there’s a swivel handle that slots into the top, just aft of the cylinder. A nylon shoulder strap can be clipped onto moulded rings at the front and back, and is adjustable for length – but its use is entirely optional.

The last stage is to pop in the batteries. This requires a slot-head screwdriver to undo a pair of screws in order to pull a cover off the left-hand side of the gun. And here comes the bad news: the Mega Mastodon requires six D cells. Ouch. 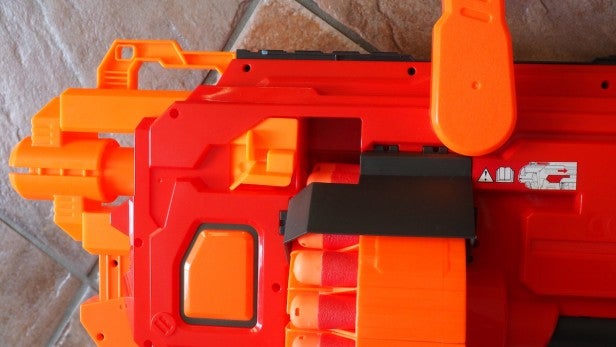 Just above and to the fore of the cylinder, on the left-hand side, is a slide-back jam door. Thankfully, I’ve had fewer jams with the Mastodon than with any other mag-fed NERF gun. One thing to note, though, is that the gun’s motordrive is disabled if the door is slid open at all; if you can’t get the motor to whirr up, check the jam door is fully closed.

Speaking of the motordrive, its activation button is in the shape of a secondary trigger below the firing trigger, just as it is on the Elite HyperFire, the Elite Stryfe and other flywheel-powered NERFs. You use your middle finger to rev up the motor and your index finger to set the darts firing.

The Mastodon has a generous three tactical rails: two on top and one below the barrel. You could easily add a Modulus Grip Blaster to one as a back-up weapon, maybe the Blast Shield from the Modulus Strike and Defend kit to another, and, er… A bipod underneath? Yeah, OK, three rails is probably unnecessary, but it’s better to have too many than too few. 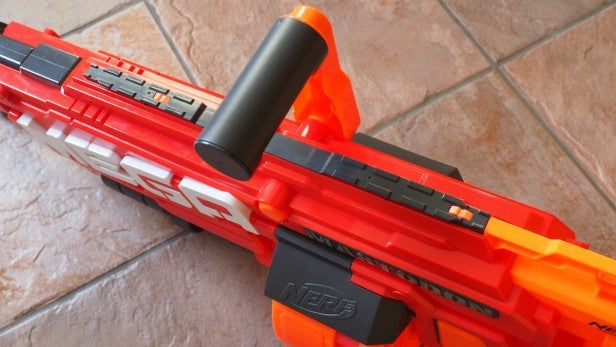 Loading up with ammo is as simple as pushing the Mega darts into the open front of the cylinder, turning the cylinder by hand when necessary.

Getting that motordrive spinning up and popping out those first few darts is a deeply satisfying experience. In part that’s down to the feeling of having something powerful and substantial in your hands. You feel like you should be storming through the breeched hull of an alien space hulk, or pumping explosive rounds into a jungle encampment so your sniper buddies can pick people off in the ensuing chaos. 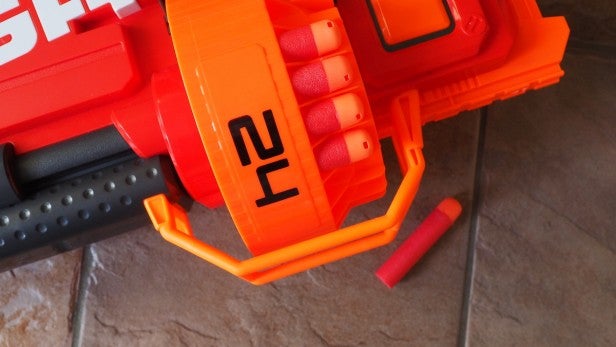 In the past, I’ve found that the Mega darts pack a decent punch, but aren’t always as accurate as the smaller NERF darts. You get an OK spread with the Mastodon, though – it’s accurate to around 20 inches at 20 feet with fresh batteries, which is about the same as the Elite Hyperfire with its teensier Elite darts. The firing rate of three darts per second is fast enough to offer good covering fire or to storm a position.

Where the Mastodon does excel is that its Mega darts offer a very flat initial trajectory when firing parallel to the ground. This means you can get an excellent range of about 40-50 feet without having to aim high and let the darts arc down.

If you do elevate the barrel to increase the distance, though, you add only around 20 feet, where you can sometimes get another 50 feet from Elite darts. Swings and roundabouts, in other words; the Mastodon is good for short to medium distances, but no sniper or long-range artillery rifle. 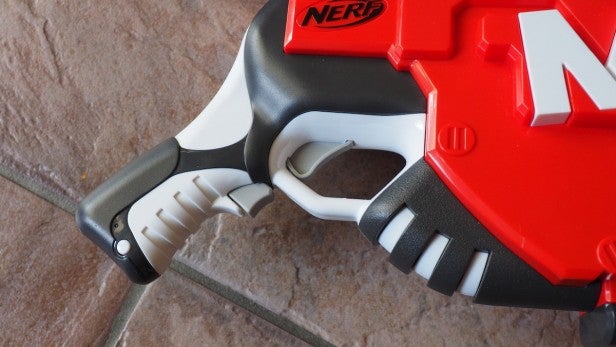 While the whirr of the motor is a drawback on smaller blasters, destroying any chance of being stealthy, there’s no such worry with the Mastodon – you’ve got no chance of being discreet with a gun of this size!

The motordrive does spoil the party a little, however, with that diet of six D cells. Not only are they expensive, but they’re not the type of batteries that you’re likely to have just lying around in a drawer – especially not six of them.

Still, I’ve used the Mastodon for at least six lengthy NERF battles now, as well as for range and accuracy tests, and still haven’t had to change the batteries or felt the performance drop.

Should I buy the NERF Mega Mastodon?

As an intimidating heavy assault weapon, the Mastodon is in a league of its own. It’s big, hard-hitting, rapid-firing and a whole heap of fun. Sure, it isn’t super-long-ranged, but the flat-ish trajectory out to medium distances more than makes up for that. And did I mention that it’s fun?

You might look at the price and gasp, but the Mastodon can be found for much less than the RRP. The only big issue is the stock of D-type batteries you’ll need to amass in order to be sure your foam-popping frolics aren’t brought to a standstill. Also, NERF’s Mega darts aren’t as cheap as the smaller Elite darts – although there’s less of a price difference if you don’t mind buying third-party darts.

The Mastodon is a foam-firing behemoth that oozes fun from every inch of its massive frame.