Bags of fun, the Nerf Laser Ops Pro AlphaPoint proves that foam darts are so yesterday.

What is the Nerf Laser Ops Pro AlphaPoint?

The Nerf Laser Ops Pro AlphaPoint is an oddity: a Nerf gun that doesn’t shoot foam projectiles. Instead, it switches the darts for laser tag, which not only makes the AlphaPoint easier to pick up and play, there’s no mess to clear up either.

With a smartphone connection offering power-ups and timed games, the Laser Ops Pro is a kit capable of both simple, fast games, and more involved battles. Slightly dull AR game aside, this is a well-priced and fun kit for pretty much any age.

AlphaPoint is available in a single or twin pack. Annoyingly, if you buy the twin pack then you don’t get the solo attachment, which lets you mount your phone on the front of the gun to play the AR game. This seems like an odd exclusion, since the plastic solo attachment can’t cost that much to make. 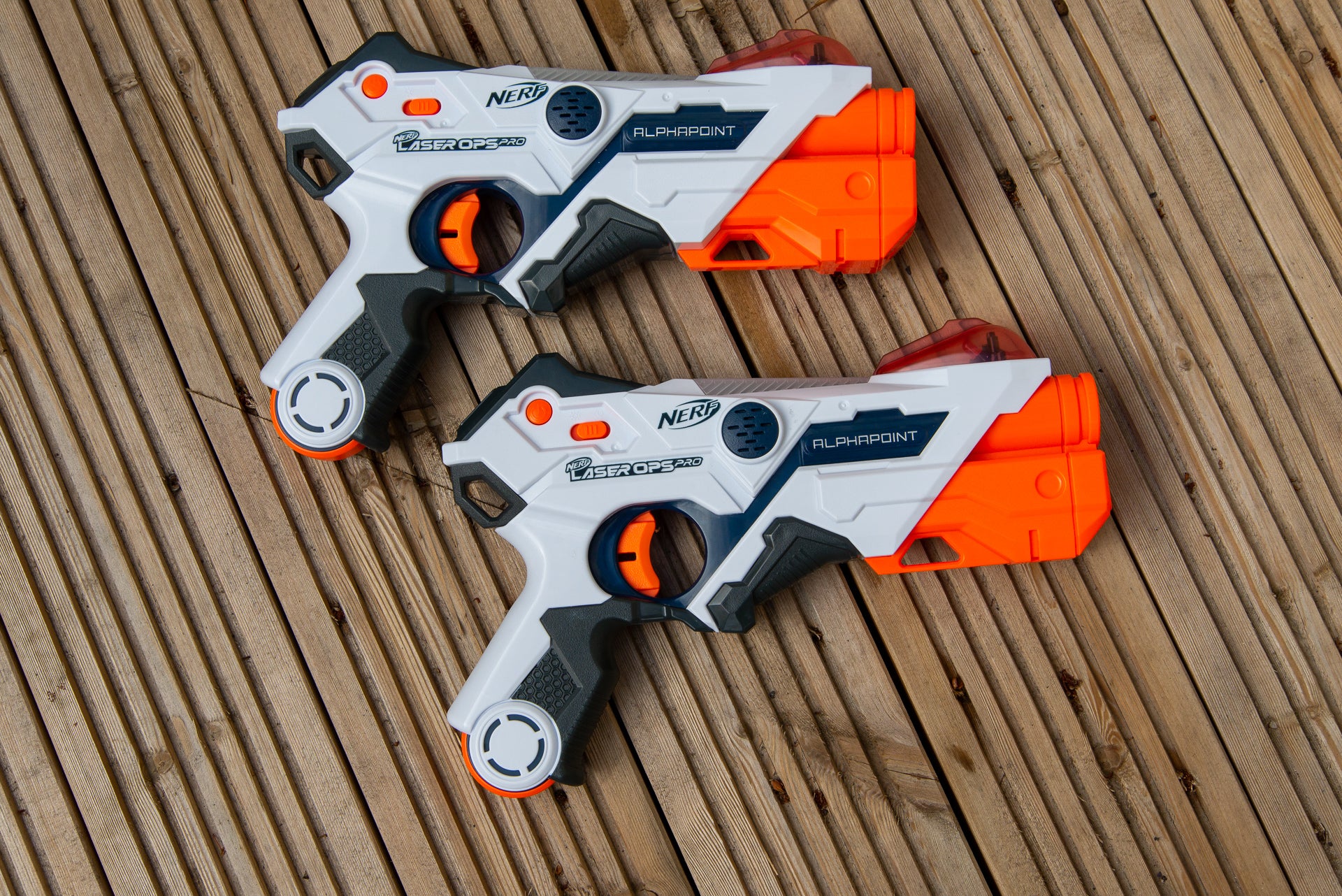 Controls are clearly marked and easy to access. On the side of the gun are the power button and switch to change between indoor and outdoor mode. A big button on the handle is used to “reload”, with the orange trigger displaying a definitive clicky action. 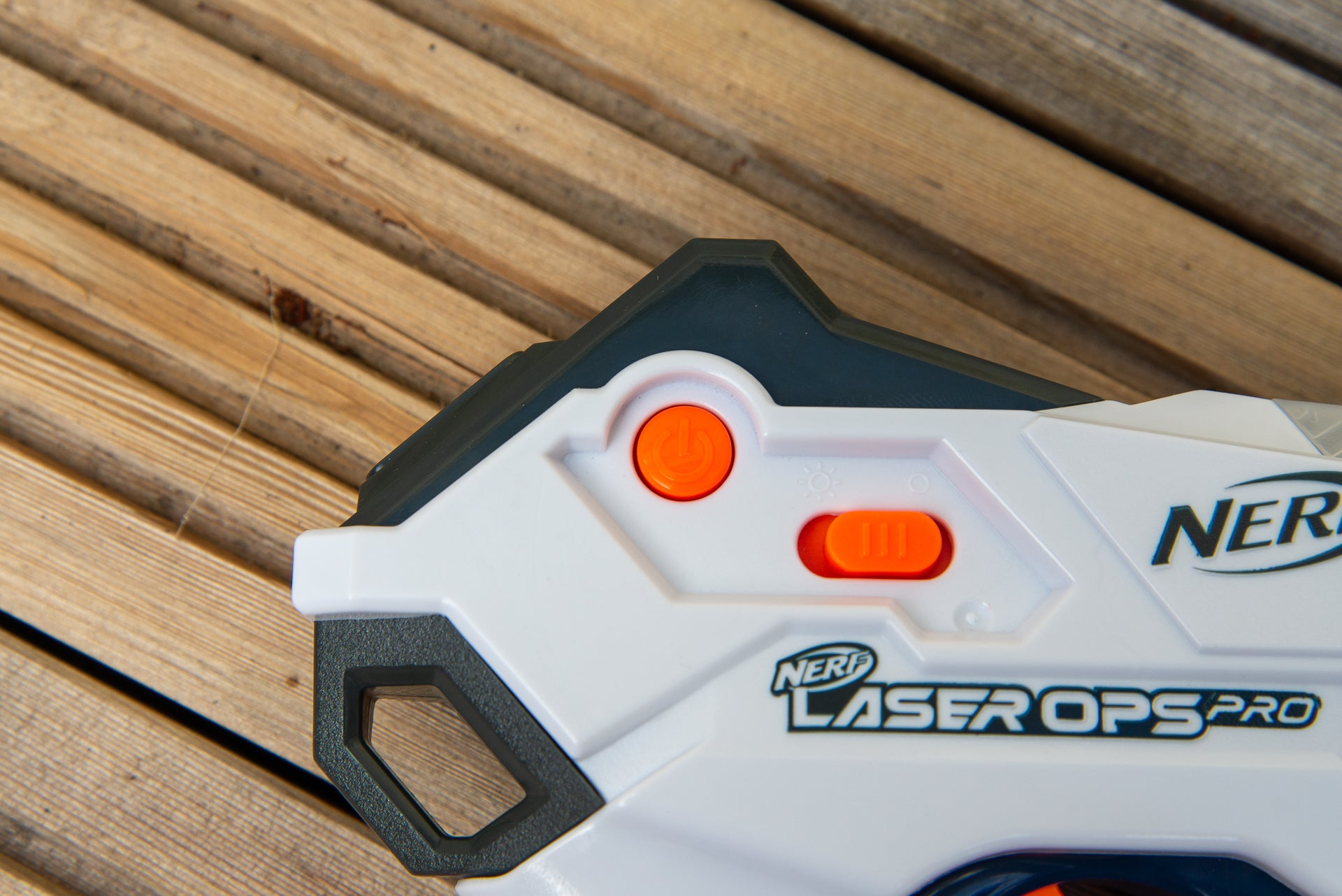 With laser tag integrated, each gun has a receiver up top, so you don’t need to wear any additional equipment. When you take a hit, the receiver lights up red to you let you know.

Guns run on four AA batteries, which slot into a screw-in compartment at the front. Battery life should be around 10 hours, which is generous. Mine gun was still going strong after a couple of weeks. 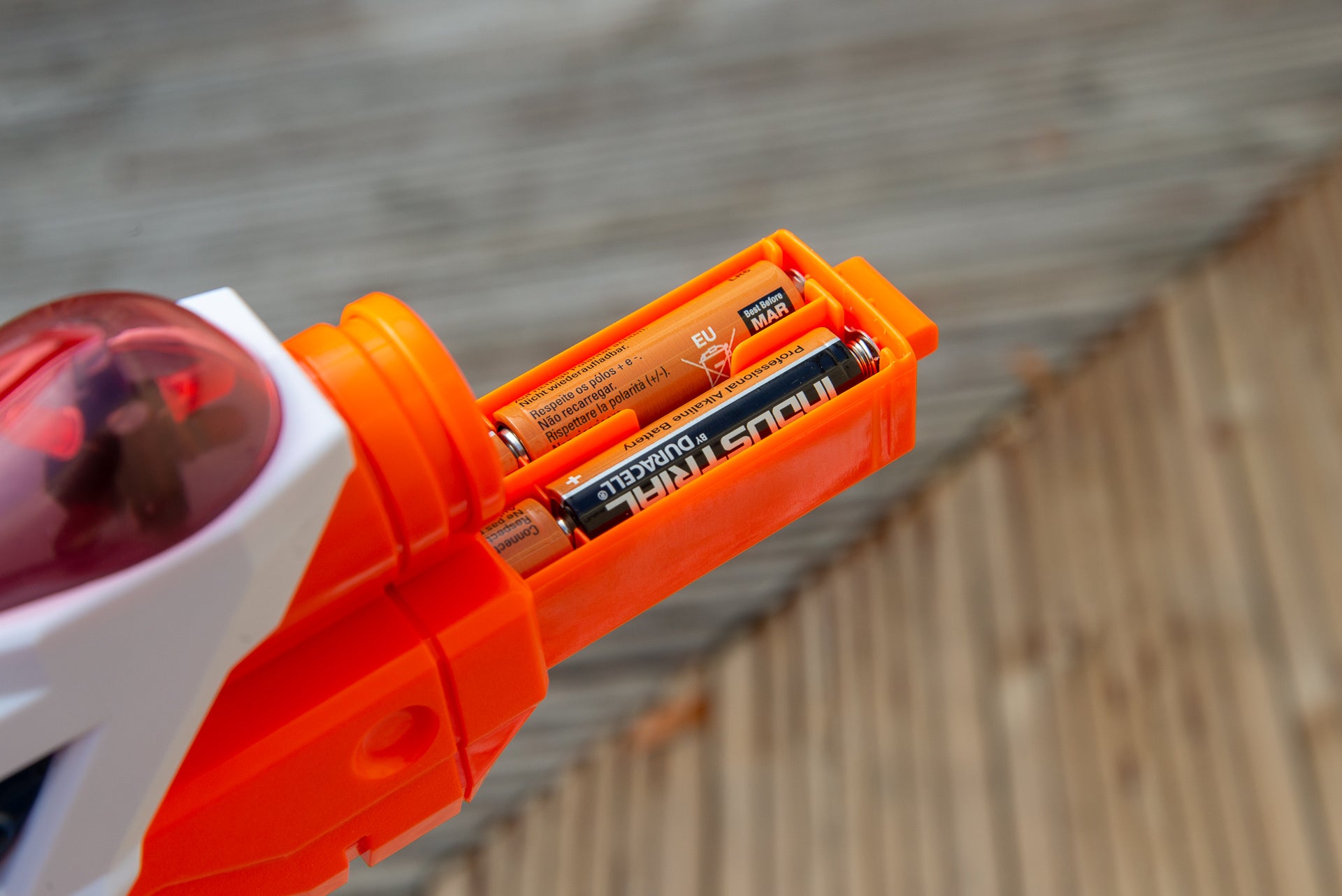 Out of the box, you can get going immediately with the Nerf Laser Ops Pro AlphaPoint. Just power on the gun and the light on top will turn purple. A squeeze of the trigger turns the gun on into free-for-all mode, where anyone can shoot anyone. 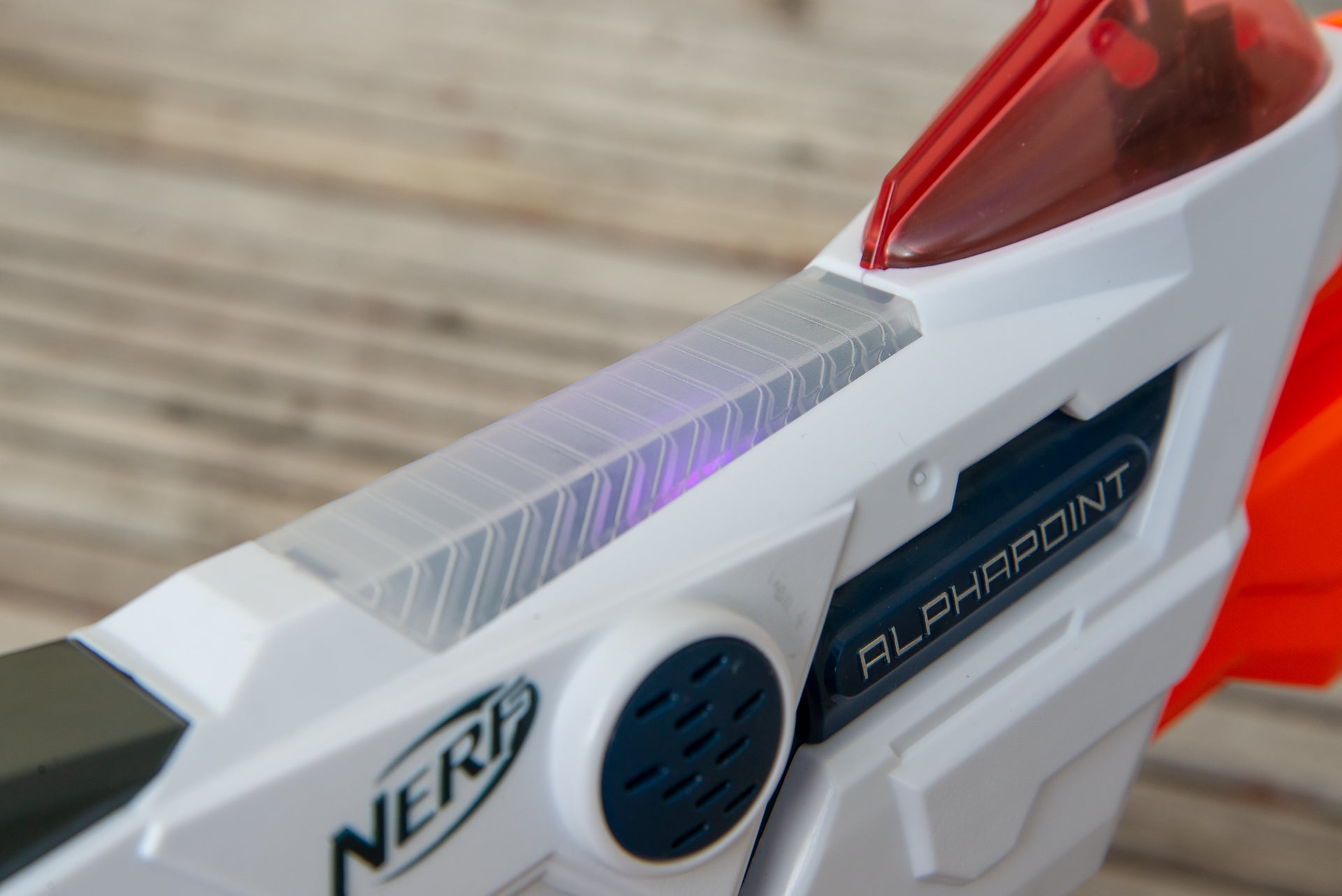 Five hits and you’re dead, with the health indicator changing from green to yellow to red. When you’re dead, the gun lights up red and plays a tune. A pull of the trigger puts you back in the action after a short delay.

You get twice the number of shots, with the power meter going through the same range of colours. When you’re out, a tap of the button recharges you, ready for the next round. 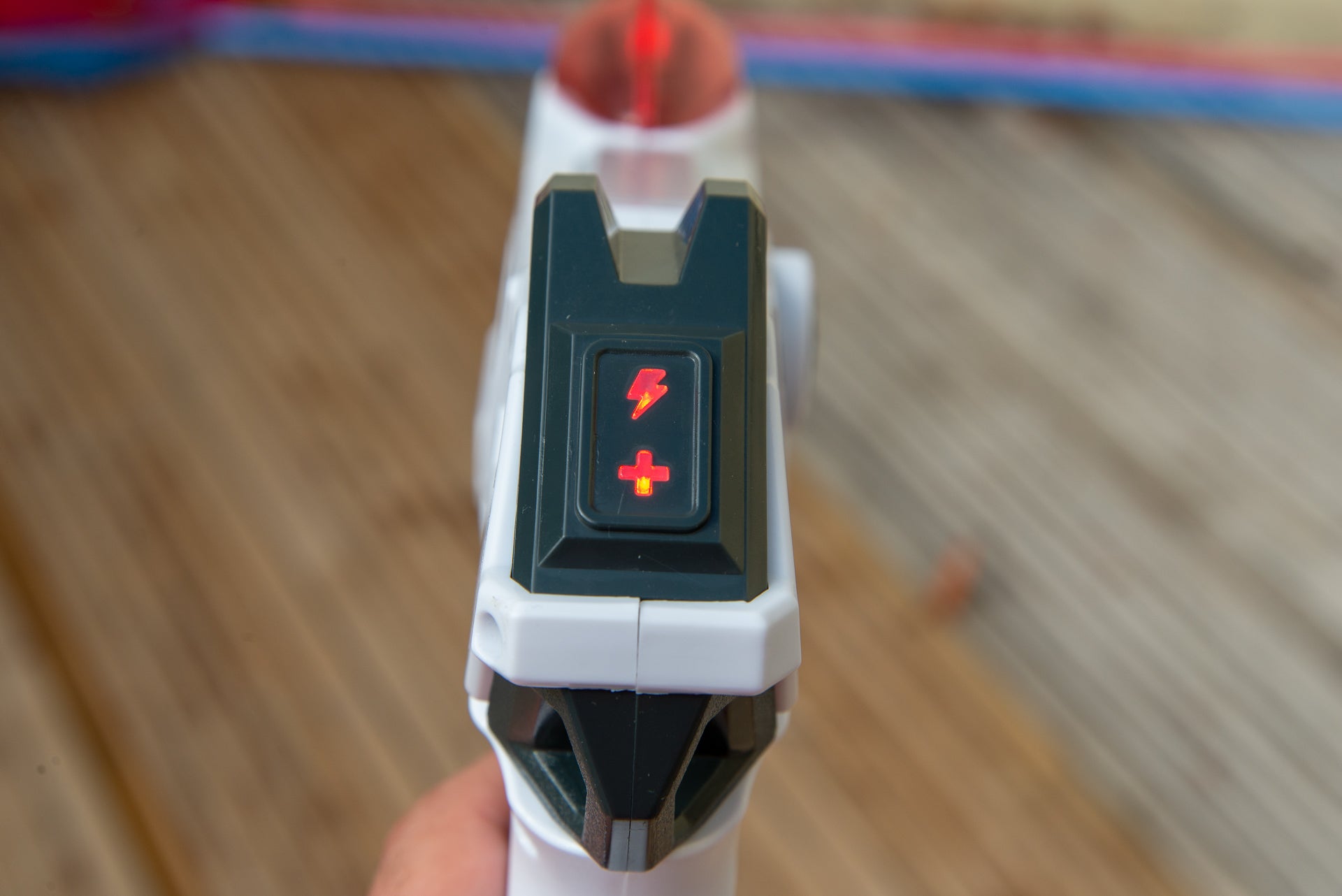 If you’ve got more than two players, you can play in teams. When the gun turns on, a tap of the reload button changes the gun colour, and you can change from purple (free for all) to red or blue teams. In team mode, you can only shoot people on the opposite team.

It’s immediate fun without any hassle. Targeting and response is super-accurate and range is brilliant: I managed 25 metres indoors; outside I hit the extremity of the garden at around 40 metres and was still registering hits. 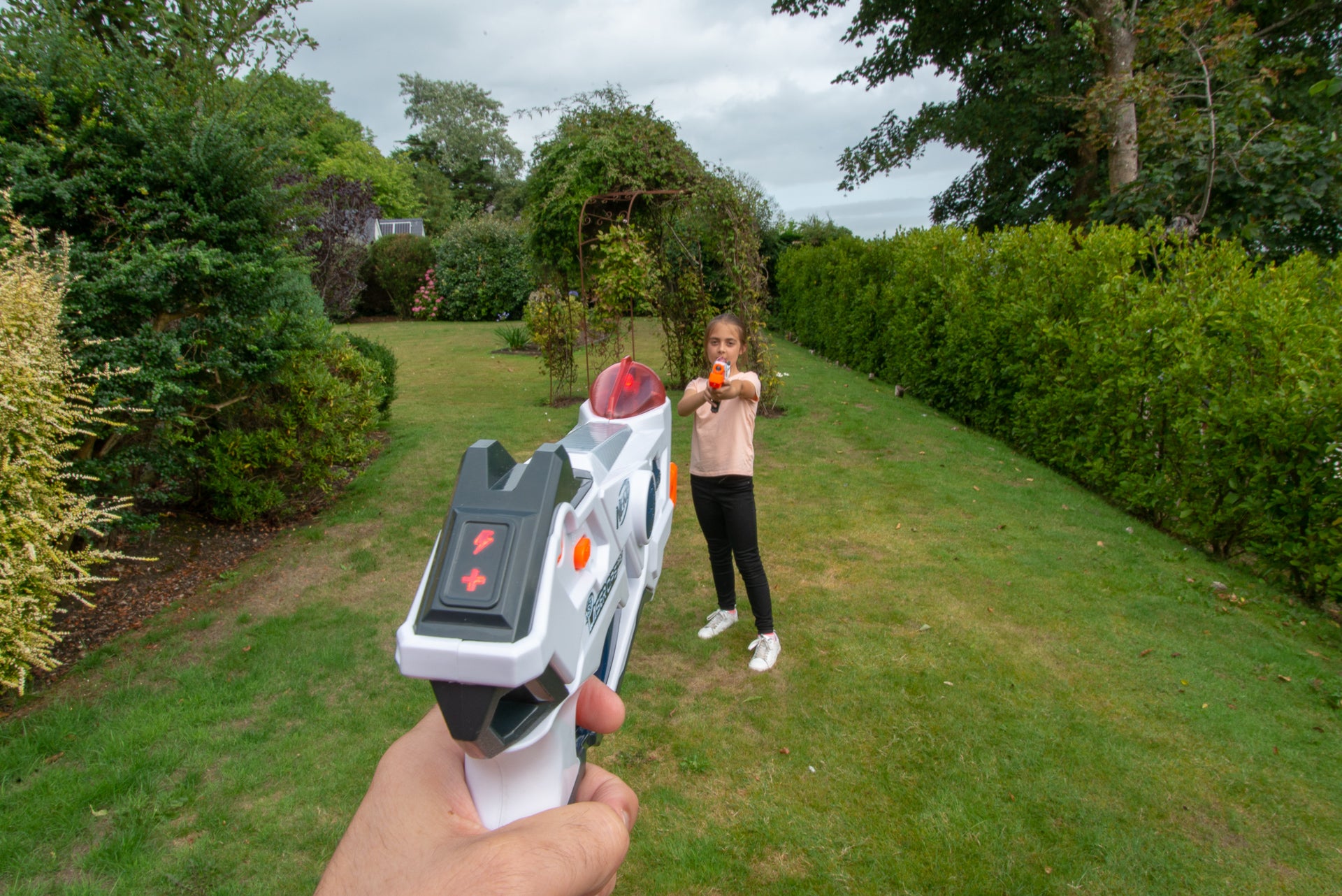 The only problem with the basic game is that it doesn’t track who’s winning, which is where the Nerf Laser Ops Pro app comes in. Hook up the blasters to your smartphone via Bluetooth (each player can have their own phone, or you can all share), and the options expand. For convenience, smartphones fit into arm straps, so you can carry them as you play.

With a smartphone tracking the game, Nerf Laser Ops Pro AlphaPoint adds in timed games, with the app working out who won on points. Pre-defined games include teams and free-for-all, set for five minutes; you can create a custom game and set your own time limit (three, five, 10 or 15 minutes).

Playing with a smartphone allows you to earn upgrades (faster reload times, more health and more damage) and power-ups, including Health Allies (shoot your team to heal them) and Massive Blast (cause damage to all opponents with your next shot). It adds an extra element to games, which is welcome when you have larger teams.

If you have the solo attachment, the Nerf Laser Ops Pro app also has a built-in AR game where you can shoot drones superimposed onto your camera’s screen. It’s fun, but soon becomes dull; suddenly, not having the solo attachment with the twin pack doesn’t seem like such a loss.

A Nerf gun without the foam darts doesn’t sound like a huge amount of fun, but the Nerf Laser Ops Pro AlphaPoint is a brilliant way to enjoy laser tag, whether with a quick out-of-the-box free-for-all, or a smartphone-controlled team battle.

Great pricing (particularly for the twin pack) makes these a surprisingly affordable toy and a brilliant way to while away the hours inside or out.