The only blaster you’ll ever need?

The near-exhaustive list of NERF blasters, their shapes, sizes, colours and some of those weird and wonderful names they dream up at Hasbro HQ is pretty impressive. Launching several new blasters each year is no mean feat, and this past year has seen some serious competition enter the marketplace.

Both Mattel and Knex have released their own brands of blasters in the form of BOOMco and K-Force respectively, so to maintain its foam firing dominance Hasbro has cooked up something big and bold to get NERF fans talking: the Modulus. 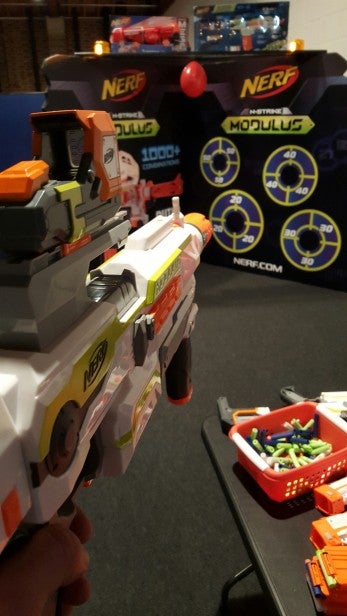 The basic kit – offering 30 potential combinations of blaster setup – comes complete with the blaster unit, a targeting scope, a drop grip, dual-rail barrel, storage stock, banana clip, and ten darts. I was a little disappointed to discover that a purchase of four AA’s would be required – it isn’t the cost of them that I personally take issue with, more the return journey to the retailer.

The overall design of the N-Strike Modulus ECS-10 Blaster is pretty well removed from all its predecessors. This appealed, alongside the fact that the ECS-10 Blaster felt largely sturdy in place.

A squeeze of the trigger and the newly styled white darts with red tip blasted out a decent distance. The battery enhanced chamber sent my foam arsenal about 18-20m with decent accuracy, which doesn’t quite achieve the claims of 27m on the box. The ten clip runs out pretty quickly too.

As far as extras are concerned, there are four expansion packs with this new Modulus range and with them all you have an incredible 1,000 blaster permutations at your disposal – which really is overkill.

On offer is the Stealth, Long Range, Flip Clip and Strike and Defend bolster packs, each retailing at around £15. The Flip Clip should probably be at the top of any NERF shopping list, giving you an additional 24 foam darts and, as the name suggests, a way to get them all into action at speed.

In my opinion, the Strike and Defend is pretty much worthless – who wants a tacky plastic shield? The stock part, or the “strike” end hides a single, manually powered secret shot – this is most certainly my favourite added extra.

As for the other pieces, despite there being enough rail on your ECS to load up more, I’d hang fire for now and enjoy the elements above. 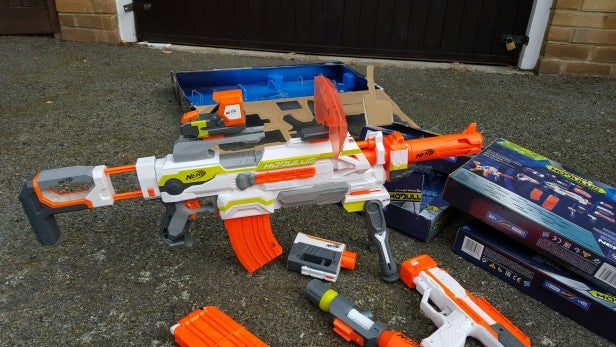 Should I buy the NERF N-Strike Modulus ECS-10 Blaster?

For the more seasoned NERF fan, this model is far too similar to the Stryfe to be a consideration.

Otherwise, the ECS-10 Blaster looks great and will appeal to those who are NERF curious – it’s a great addition to any office warfare arsenal you might have in place.

Quite simply, the ECS is a blast.