With its Full HD sensor and free cloud storage the Neos SmartCam is a great budget camera, but restrictive recording means it’s not ideal for everywhere.

Security cameras might have been getting smarter but they’re also getting more expensive. The Neso SmartCam redresses the balance: here’s a Full HD camera that costs just £19.99. If that doesn’t sound cheap enough, I should also point out that you get free cloud storage, too.

The catch is that the stand’s not that secure and that cloud storage is massively limited. Yet, for this price, it’s easy to forgive the minor faults and the Neos SmartCam is a great choice where you want something cheap to monitor your home.

The Neos SmartCam is a tiny almost-cube (45 x 50 x 50mm) making it easy to place practically anywhere. Embedded in the cube is the stand, which gives you height and angle adjustment. The entire camera swivels on the stand, so you can point it in the direction you want, too. With a magnetic base, the Neos SmartCam can be quickly stuck to a metal surface, although you can also use the metal mount to wall-mount the camera quickly. 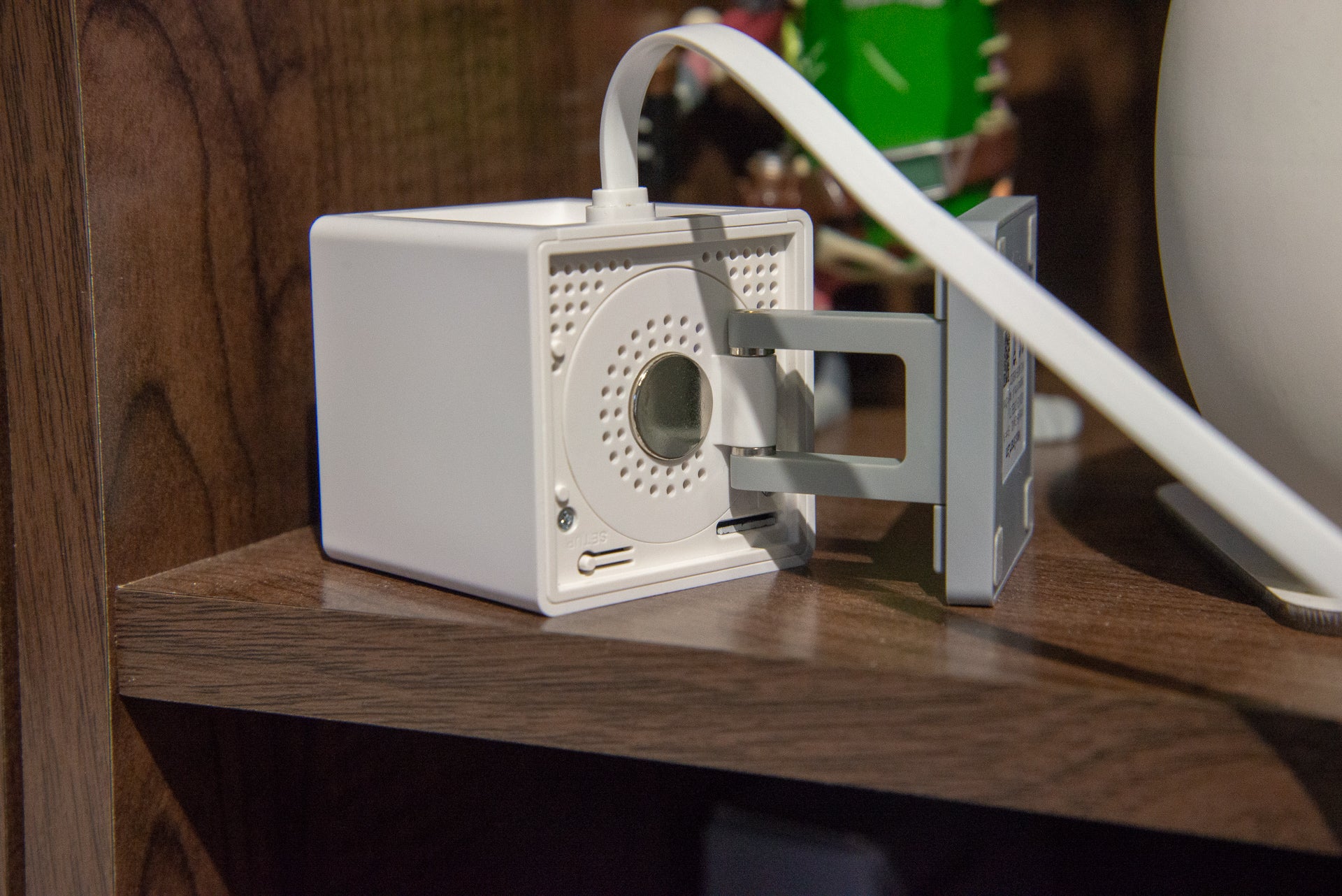 It sounds great and, for the most part, it is. However, the weight of the camera can topple the entire thing, and the swivel operation is so light that the weight of the USB cable can pull the camera away from where you were pointing it. It’s nothing that you can’t work around with careful placement of camera and cable, mind, but it’s not as good a stand as on the Nest Cam IQ (although that model is a lot more expensive).

The Neos SmartCam is powered by a micro USB cable, which plugs into the back. There’s a Type A USB port, which can be used to power another device, although it seems unlikely that most people will use this feature. There’s also a microSD card slot in the base, which turns on permanent recording on the camera to supplement the free cloud storage. 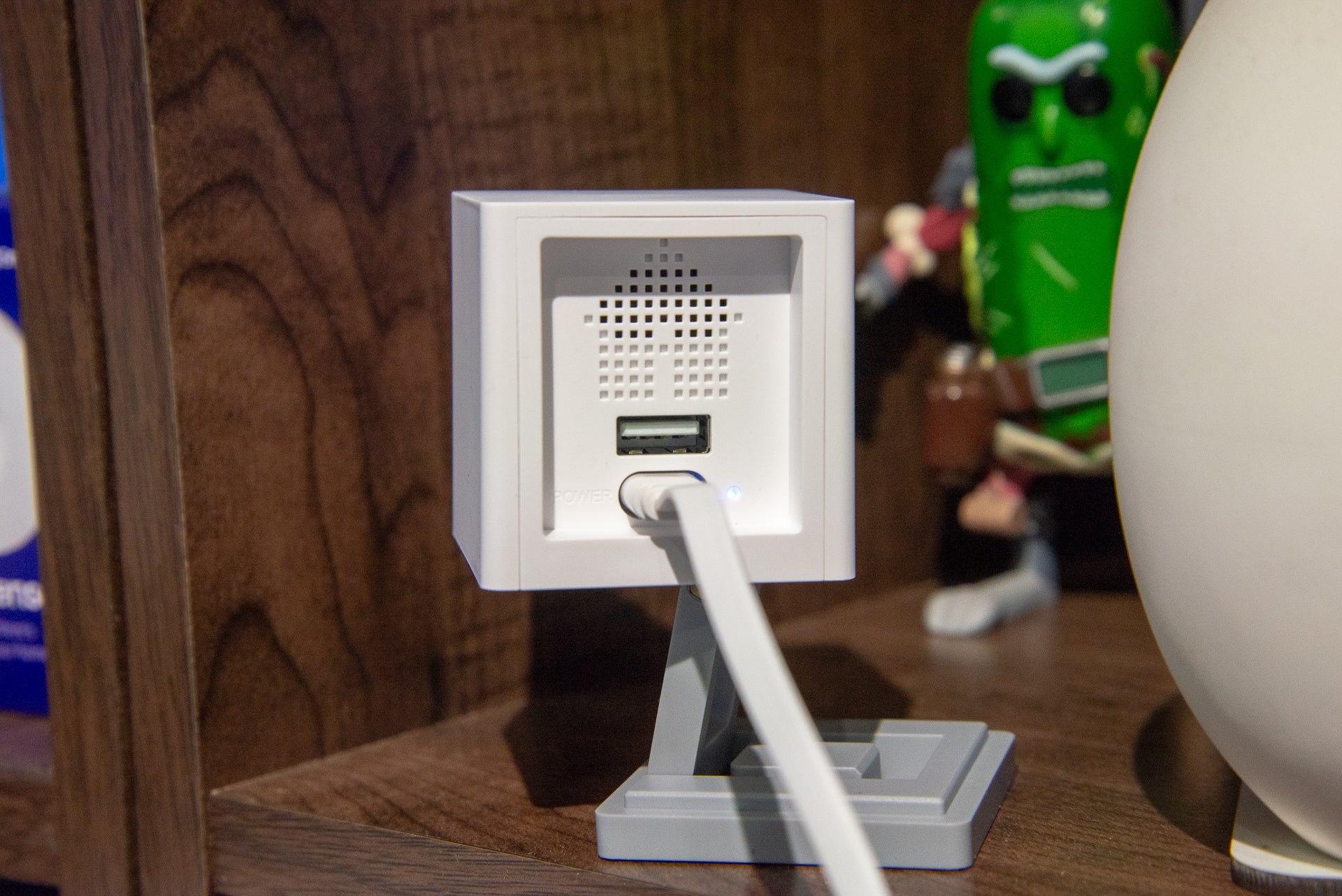 Once set up, it’s easy enough to get the camera connected to your home network and the smartphone app. Once connected, the app lets you dive into the live view to see what’s going on and even start recording directly to your phone. By default, the camera is set to automatically detect movement across the entire frame. You can’t set a motion activity zone to monitor but you can adjust the sensitivity of the motion detection.

The camera will also listen for loud noises; again, you can adjust the sensitivity if you find that the Neos SmartCam is notifying you about everything going on. 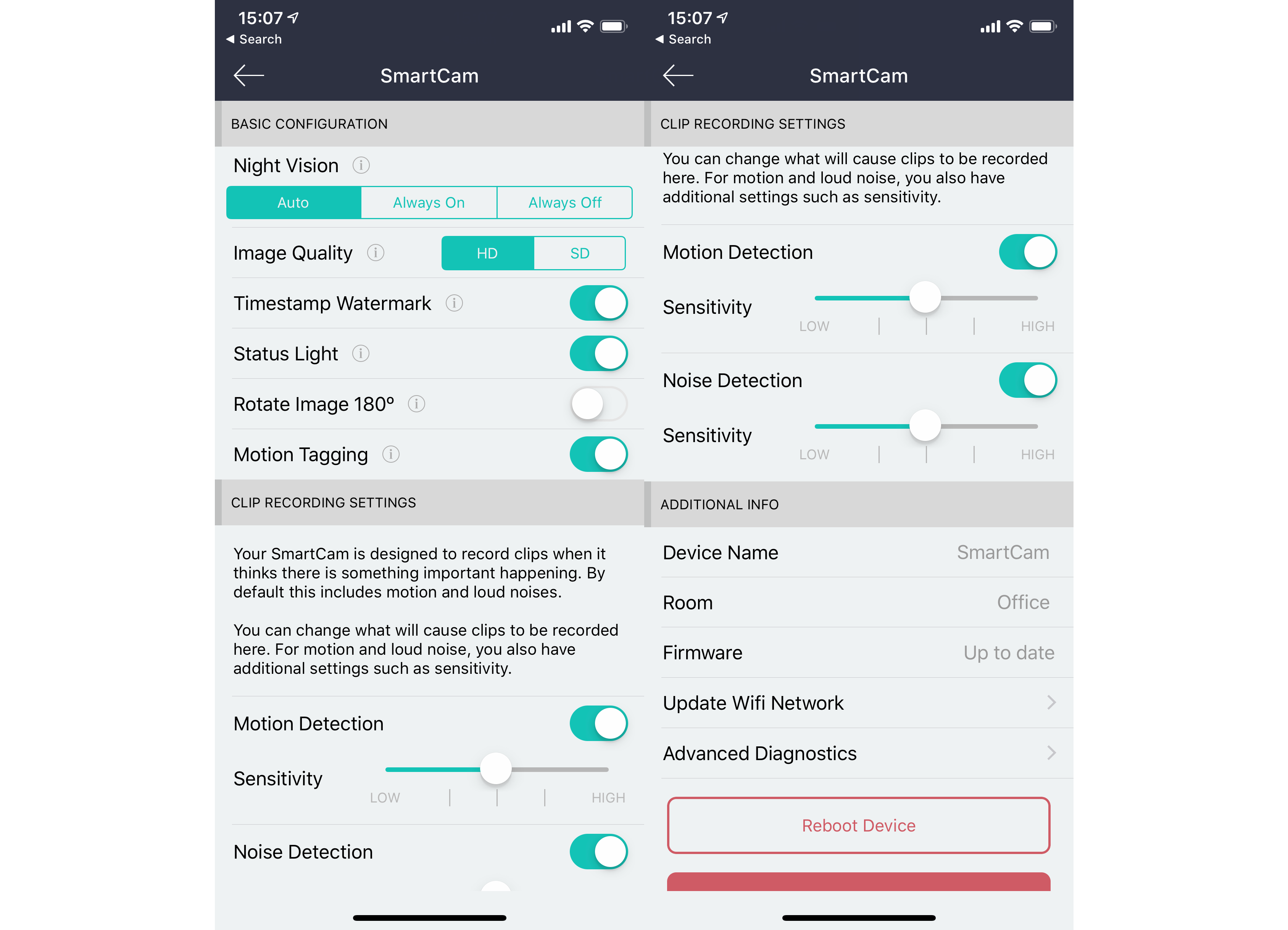 Once the camera detects activity, it records a 12-second clip to the free cloud storage. Clips are saved for 14 days, although they can be downloaded to your phone. Once the camera has been triggered, there’s a five-minute delay before another clip can be recorded.

In my experience, the Neos Smartcam always managed to capture me and my face when I set it off, but there’s a chance that the limited recording options would mean that you miss a crucial bit of detail. It’s a shame that there’s no way to upgrade the cloud storage to allow more frequent and longer recordings.

Motion and sound detection is sent as an alert to your connected smartphone so that you know what’s going on. Clips can be found by browsing through the app, which shows a handy thumbnail, so you can jump straight to the one of interest. It’s a shame that you can’t filter by day, as diving back 14 days is a lot of work scrolling. If you want to extend recording time, you can insert a microSD card into the slot. This turns on permanent recording, where the camera records in files one minute long, overwriting the oldest file when the memory card is full.

That’s great in practice, but it’s annoying that you can’t view the footage in the app. Instead, you have to pull the card out and insert it into a computer to view the footage. Not the end of the world unless, of course, you really need a bit of footage and the thief has made off with your camera. Two-way audio lets you speak to anyone on the live feed through your phone. The Neos SmartCam is surprisingly loud, although its small speaker is quite tinny. Still, the camera is loud enough for people to hear and you can use it to warn off a thief. Audio recording is a little more distorted and not quite as clear as with other cameras that I’ve reviewed.

With its default settings, I found the Neos SmartCam had motion detection about right. It didn’t go off in the room I had it located in too often and picked up my movement and face as I entered the room each time. Neatly, as you play back video, the system highlights movement by drawing a box around it. You can turn this feature off if you prefer.

Sound detection is, as always, a little less accurate. I found that the camera would go off more regularly, even with a bit of louder typing, at the default settings. Turning the sensitivity down improved things, although you can always disable sound detection if you find the feature too annoying.

With its 110-degree lens, the camera doesn’t capture quite as much of a room as its rivals, although you can still cover most of what you want. During the day, video quality isn’t bad at all. The video is a little jerkier than on some models, and there’s a little less detail than on the top cameras. However, you can still spot individuals clearly enough, which is largely the point of a security camera. 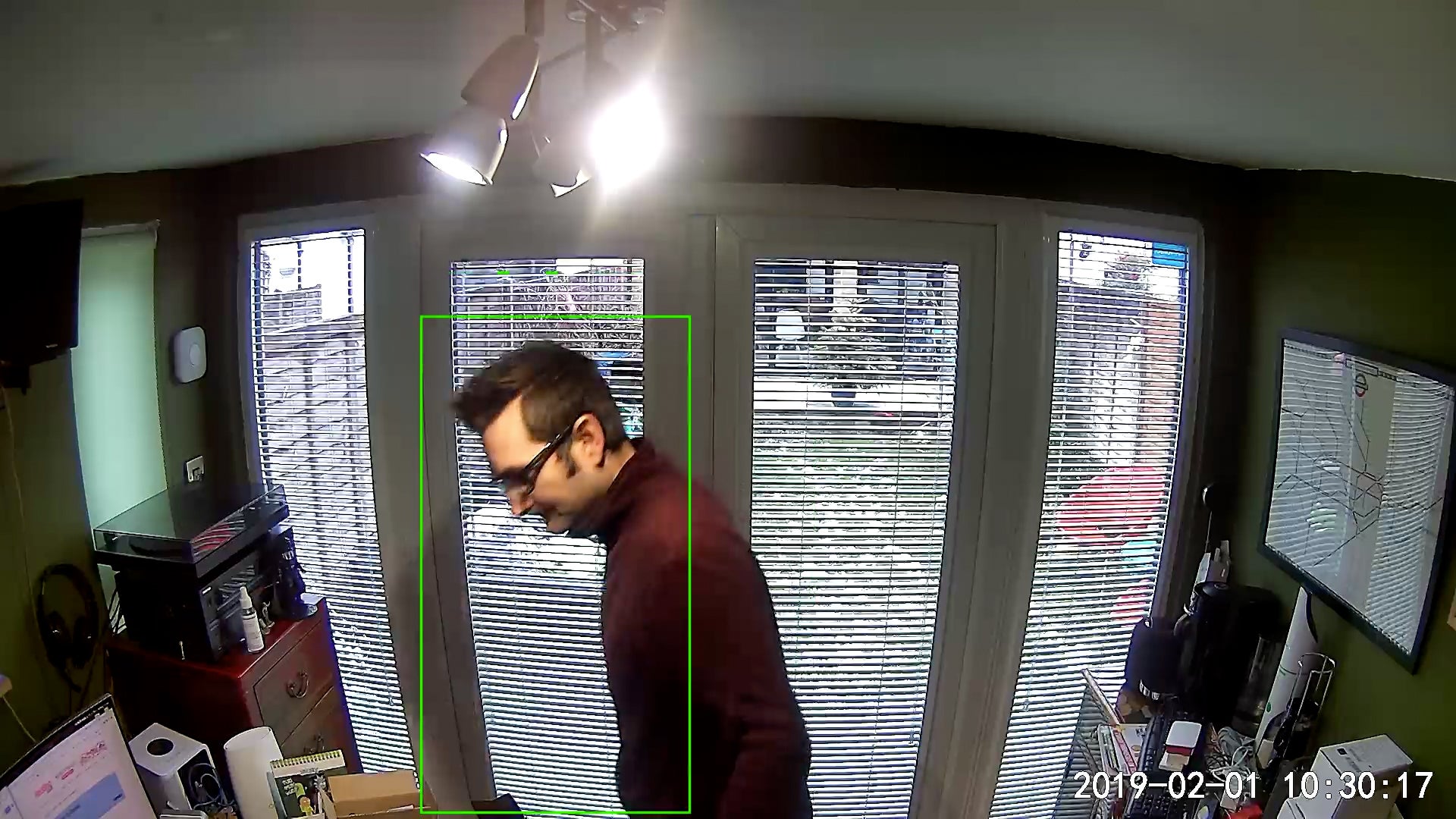 At night, the Neos SmartCam turns on its IR LEDs to light up a dark room. This smudges out detail, as with all cameras. Even so, it’s easy enough to spot individuals even if some of the finer details are removed. 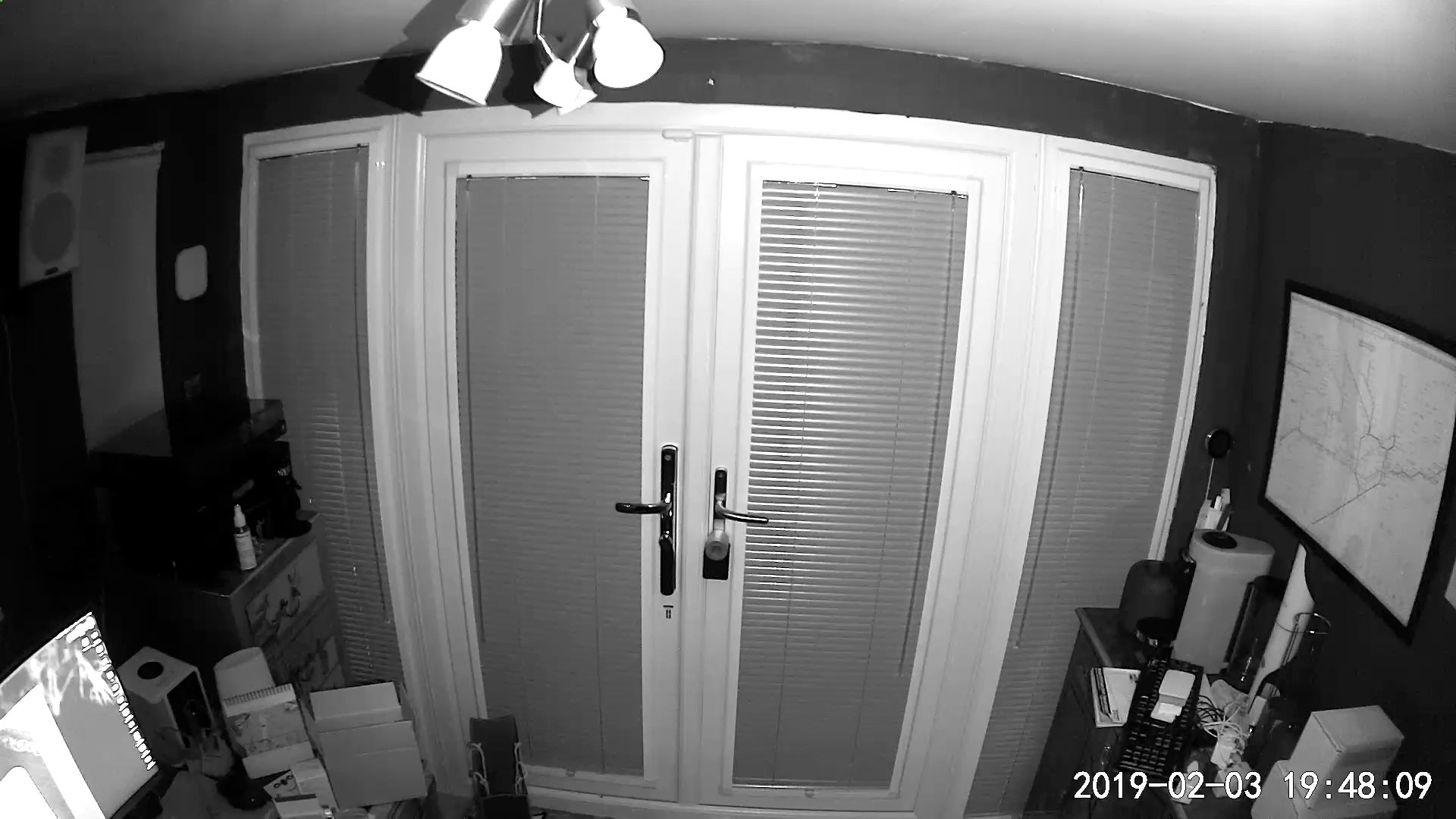 Sound recording is a little weak on this model, with the camera generating plenty of background noise that makes it harder to work out what’s going on.

There’s currently no Amazon Alexa or Google Assistant support for the Neos SmartCam, so you can’t view the video stream on your video-enabled smart devices, such as the Amazon Echo Show. It’s a minor shame, although something that’s easier to forgive at this price.

You’ll find cameras with more features and better quality in my list of the best security cameras. What you won’t find are any models that are as cheap as the Neos SmartCam, and that’s the real attraction of this model.

Its cloud storage might be heavily limited and the five-minute cooldown period a little restrictive for some situations, but it’s still free. With an app that’s a little basic, but does the job, there’s a lot to like about this camera. If you’re after something cheap for occasional use or just that extra peace of mind, the Neos SmartCam is a great choice.