So with Netgear determined to hit such a low price point how did the RD102’s bolstered, but still fairly unremarkable, specs perform? Well it turned out to be both faster and slower than we imagined. 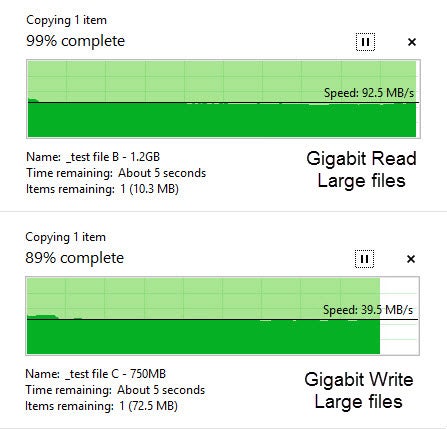 Where it was faster was in large file reads. Here we clocked the RD102 at a rock solid 92.5MBps (740Mbps), which is outstanding for such a cheap NAS and within a margin of error of the 92.4MBps (739.2Mbps) we attained from the Western Digital MyCloud, the fastest cheap external storage we’ve tested. The Synology DS414, the fastest midrange NAS we’ve tested, manages 112MBps (896Mbps), but that is effectively throttled by the limits of Gigabit Ethernet.

Unfortunately, where the disappointment lay with the RD102 was its write speeds. These are far more resource intensive and subsequently we saw speeds for large files tale off to just 39.5MBps (316Mbps). This isn’t slow, but it is a significant step down from the better performing NAS these days. By comparison the MyCloud managed 71.9MBps (575Mbps) while the DS414 hit 97.3MBps (778.4Mbps). 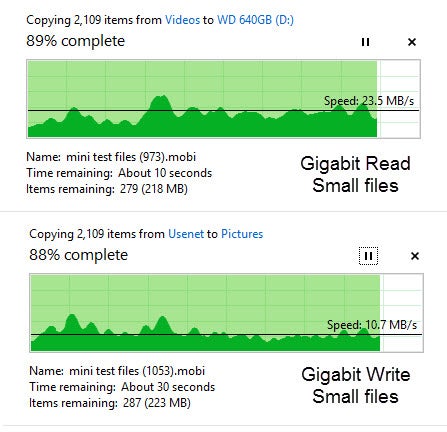 A real backbreaker for NAS is transferring lots of small files so running our 2GB test folder containing over 2,000 files hit the RD102 hard. Proportionately reads were still strong at 23.5MBps (188Mbps) but writes fell to just 10.7MBps (85.6Mbps). By comparison the WD MyCloud managed just 16.3MBps (130.4Mbps) reads, but exposed with the MyCloud’s writes hitting 14.4MBps (115.2Mbps). A more powerful  midrange NAS can achieve figures near 40MBps in both tests.

An interesting effect is applying the anti-virus option Netgear now offers in ReadyNAS 6.0. We were surprised to see this disabled by default, but we can understand why having seen about 10 per cent knocked off both read and write speeds with it applied. For many this could be too big a hit to take to the slower writes.

Lastly, we have to address noise. In our experience Netgear NAS tend not to be the quietest on the market and while the company has moved on from deafeners like the (otherwise excellent) NVX, we measured 30-35db from the RN102 when idle. This is enough to hear the NAS in a quiet room and louder than Synology’s fully populated four bay DS414 (depending on your choice of HDD). If you want to put the RN102 in a living room this could be a deal breaker. 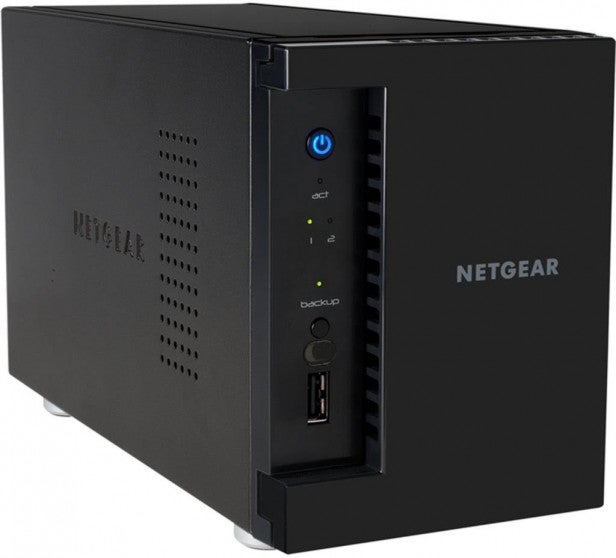 Should I buy the Netgear ReadyNAS 102?

If you’re considering buying the RN102 you clearly have one eye firmly on its price tag. Here Netgear really delivers with an unpopulated RN102 costing just £119 and we found limited time offers for fractionally over £100.

A pair of 2TB internal drives will set you back a further £130-160 and for an outlay of this magnitude an upgradeable 2TB NAS with redundancy is excellent. If you’re happy to buy a pair of 4TB drives you’re still spending under £400.

For this kind of outlay it is hard to fault what Netgear has achieved with the RD102. It looks good, is very well made, ReadyNAS 6.0 is a big step forward and we expect ReadyCLOUD will soon tie together most of the company’s networking products. We do have reservations about the write speeds of the RD102, its noise and the outdated mobile apps, but it remains money well spent.

For little over £100 Netgear has redefined what a user can expect from an entry level NAS, just as Western Digital’s MyCloud range made many question whether they need a NAS at all. It is a little noisy, its mobile apps desperately need updating and its write speeds are nothing special, but superb read performance, excellent build quality and the slick new ReadyCLOUD and ReadyNAS 6.0 software more than compensate. If you can afford to spend more do so, but at this price point the RN102 sets the standard for all entry level dual bay NAS to follow.

Next, read our best routers round-up