Available on Xbox One, PS4 (reviewed), Xbox 360, PS3, PC
Criterion’s stewardship of Need for Speed has been the best thing to happen to EA’s venerable racing franchise, transforming a tired, has-been, trying-too-hard-to-be-cool arcade racer into a revitalised contender that actually deserves its mammoth sales. 2010’s Need for Speed: Hot Pursuit was comfortably the best Need for Speed of the HD console era, while 2012’s Need for Speed: Most Wanted was a gripping remake of a flawed classic. It’s a bit of a concern, then, that the Need for Speed: Rivals isn’t a Criterion production, but the work of a new studio, Ghost Games. Are we back to the horrors of Need for Speed: Underground 2, or – worse – the woeful Need for Speed: The Run?

Thankfully not. Amongst the staff at Ghost Games you’ll find alumni from the Need for Speed team at Criterion, plus developers who worked on Forza Horizon, Project Gotham Racing, Shift 2: Unleashed and RACE Pro, and that experience shows. Need for Speed: Rivals isn’t just a stunning next-gen debut for Need for Speed, but an arcade racer worthy of comparison with the best of the Burnout series, Forza Horizon, the sadly overlooked Split/Second and the aforementioned Hot Pursuit. Give us a little more time before we say for definite, but it might even be the best Need for Speed ever made. 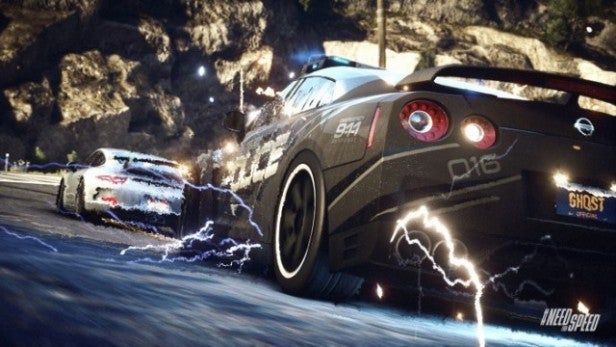 The basic setup takes the best from Need for Speed: Most Wanted and Need for Speed: Hot Pursuit. Like the former, it focuses on the war between cops and illegal racers over vast stretches of open road – in this case 100 miles of dirt and tarmac crossing the fictional Redview County. Like Most Wanted the open world is packed with ready-made events, which you can trigger as you pass through their markers with a tap of a bumper. Like Hot Pursuit, it has careers for both cops and racers, giving you two different sets of events, missions, cars to unlock and ‘pursuit tech’ upgrades to install. The game even has a kind of storyline, though it’s an onobtrusive effort that doesn’t force you to watch endless z-movie cut scenes.

What Rivals brings that’s new to the part is a system it calls AllDrive. Hot Pursuit introduced the idea of Autolog, where the game actively pits you against your Xbox Live or PSN friends, comparing achievements, finishing times and progress so that you were playing with each other, even when you weren’t doing so at the same time. AllDrive takes a different tack, signing up to six racers into its open world, and breaking down all the barriers between solo and online play. 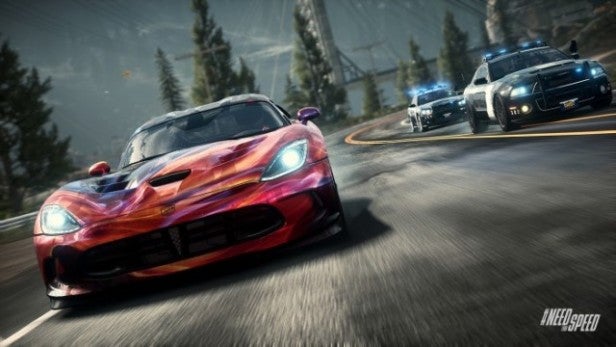 The nearest comparison point is Test Drive Unlimited 1 and 2, which allowed larger groups of players to roam their Hawaiian and Balearic settings. But where the TDU games instanced off their events, temporarily separating you from the other racers, Rivals keeps it all live, all of the time. That means that player A, driving as a racer, can be motoring from their safehouse to a neaby time trial event when they find player B, also a racer, speeding past them with an angry bunch of CPU-controlled cop cars on their tail. Player A can jump in and help player B out, challenge them to a head-to-head race, or meanly use an EMP blast to bring them to a halt. Meanwhile, Player C, working as a cop, might join in the chase, bring player B down, or start harassing Player A until they get their just deserts.

If it sounds potentially chaotic, then it’s often genuinely chaotic, but in a way that breathes life and energy into the Need for Speed world. You don’t have to play with AllDrive on if you don’t want to, but if you don’t you’re missing out on something special.

And what a world it is in Rivals. It has some nice beachside towns and coastal scenery, but also forests, rugged mountains, rural farmlands and backwoods tracks, all criss-crossed by the kinds of sinuous, winding roads that tempt you to go really, really fast before whacking you in the face with a sudden right turn. It’s glorious stuff. 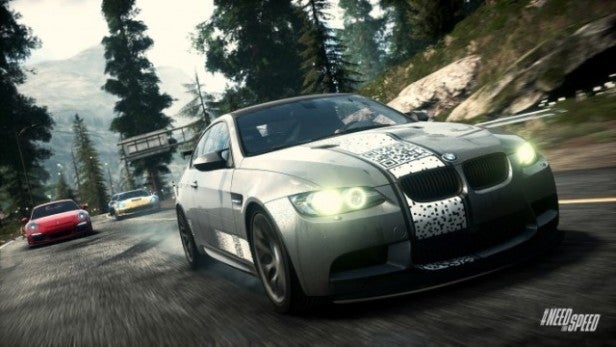 It also has the best dynamic weather we’ve seen in an arcade racer, as heavy rain, sudden squalls and blinding early-morning sunshine come in to transform the whole experience in a moment. Does Rivals have the hyper-detailed cars, stunning lighting or authentic tracks of Forza 5? Not on your nelly, but it has huge landscapes, massive draw distances and an abundance of textural detail. Running at 1080p at a smooth 30fps on Xbox One and PS4, it’s an incredibly compelling racing game.

The joy of Rivals’ structure is that it encourages you to just drive around and explore, finding hidden tracks and daredevil, chasm-spanning jumps, or just enjoying the feel of high-speeds on the open road. Meanwhile, the advantage of point-to-point, open-road racing over the courses you’d find in a more serious racing sim is that you can’t learn the tracks. Instead, you learn how to respond to sudden changes of direction, pitch or camber, and how to push each car to the edge of its performance. The result is an arcade racer where everything flows, whether you’re simply racing your way from checkpoint to checkpoint, bearing down on an illegal racer or driving frantically to give the cops the slip. 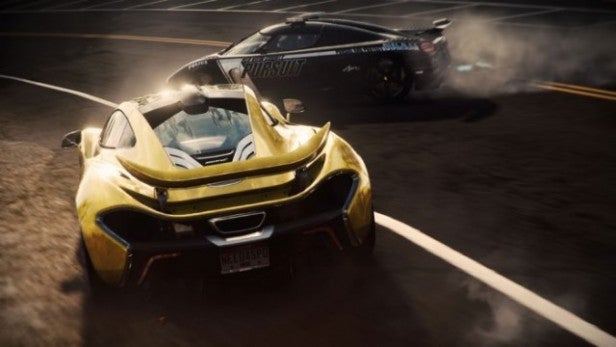 It’s furiously addictive, too. Each career is divided into chapters, and each chapter has you moving through the cop or racer ranks by completing several to do lists of objectives, that might be as simple as just getting silver in a time trial event, or as tricky as hitting five racers with pursuit tech upgrades. Completing lists and ranking up unlocks new cars, liveries, events and upgrades, and it’s not long before you’re trapped in a cycle of competing to get a new car and new upgrades, then seeing what you can do with your new car, then working again to go up the next level.

You also need to balance risk and reward, particularly if you’re driving as a racer. Events and activities earn you points, but you can only bank those points when you successfully reach a safehouse. On the other hand, while you race you accumulate bonuses, meaning those points rack up faster. Knowing when to keep racing and when to lay low is one of the tricks of the game.

The cars themselves are all real production models, albeit more exotic motors than most of us will ever afford, or most police departments might justify, for that matter. The handling isn’t exactly authentic – which is where Microsoft’s Forza Horizon has the edge – but it is believable. High-performance front-wheel drive cars feel precise and speedy. More muscular American models have more grunt, but can be a handful.

The important thing is that, like Need for Speed: Hot Pursuit, Project Gotham Racing or the Burnout series before it, Rivals makes driving fantasy supercars feel great. The more time you spend pushing a Ford Mustang GT down twisting downhill tracks or a Ferrari 458 through sweeping valley turns, the more you enjoy the simple pleasures of driving really, really fast.

SEE ALSO: 10 reasons not to buy an Xbox One or PS4 before Christmas 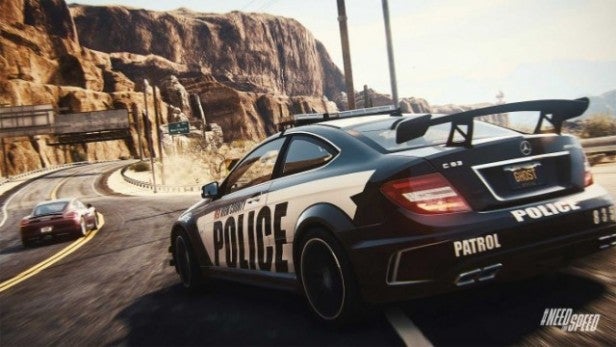 Is it faultless? Nope, and a lot depends on how much you’re frustrated by the occasional technical niggle. At one point we lost connection to our shared game, dropping us mid-event back into a single player game world, and forcing us to find and start the event again. It can also be annoying to be a whisker away from winning when some clown comes out of nowhere and – whether by accident or design – smacks you clean off the road. A handful of objectives are peculiarly difficult to manage, and sometimes you wish the cops would just leave you alone while you finish your time trial or race.

Yet, overall Need for Speed: Rivals is everything you might want from an arcade racer. It’s ridiculously fast, ridiculously thrilling and a wonder to play. It brings single-player and multiplayer together, but in a way that enhances both. In our honest opinion, it’s the best time you can have on a new next-gen console, putting even the flagship launch titles to shame.

A cracking next-gen debut for Need for Speed, and an open-road arcade racer to rival the mighty Forza Horizon. Rivals betters the cops vs. robbers angle of Need for Speed: Hot Pursuit, and the new AllDrive feature does a fantastic job of blending the pleasures of single-player racing with the excitement of online play. If you want to buy something brilliant for your brand new super-console, take Rivals out for a spin.