What happened? Were influential road-safety campaigners putting pressure on the world’s second biggest publisher? Did concerned politicians have a word in some EA bigwig’s ear? Maybe the ghost of Christmas future came to some EA executive scrooge with visions of impressionable young hoodies doing dangerous stunts and capturing their efforts on their camera phones. Whatever the reason, EA’s traditional Christmas contender is no longer the Need for Speed we know and love. It’s gone straight. It’s gone legit. The illegal street racing is out of the window, taking the melodramatic video clips, the police chases and any hint of criminal activities with it. ProStreet is arguably a bigger franchise reboot than even Need for Speed: Most Wanted. All involved with THQ’s copycat Juiced series must be very, very happy indeed. 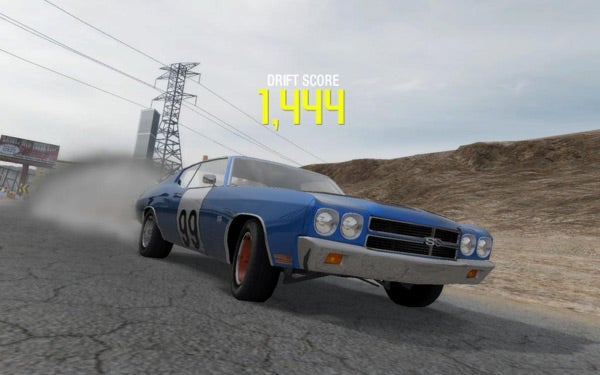 To imagine Need for Speed’s new direction, just think Forza 2 with a touch of Project Gotham and an injection of aggressive street attitude. In the main career mode, your hotshot ex-street racer is out to prove himself in the legitimate ProStreet world, entering ‘Race Day’ competitions until he develops enough points to win a place in a special racing showdown. Beat the reigning racing kings in three showdowns and you can take on the arrogant ‘showdown king’ Ryo Watanabe. Be strong, fans of ropey racing revenge stories featuring Z-list talent and nubile young models – that’s as far as this Need for Speed goes in terms of plot. 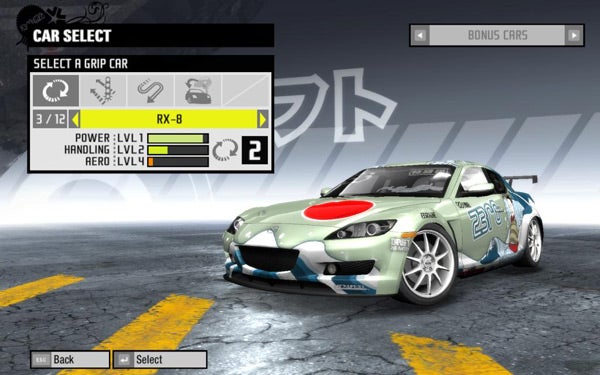 So, no more cities to explore, no more cops to outrun, no more enormous doughnut signs to demolish – what can ProStreet offer us instead? Well, this year’s team has concentrated heavily on the racing itself. We get four different modes: straight drag races, ‘grip’ circuit races, point-to-point ‘speed’ races and ‘drift’ challenges where your only aim is to get points by drifting stylishly through a small section of a track. To add a little more spice, the grip races themselves take different forms. Some are just your basic first to finish race, but others divide the cars into classes, put the emphasis on lap records or slice the track up into sections and give you points for scoring low times in each. In other words, ProStreet might resemble your average circuit racer, but there’s a little more variety built than you might expect. 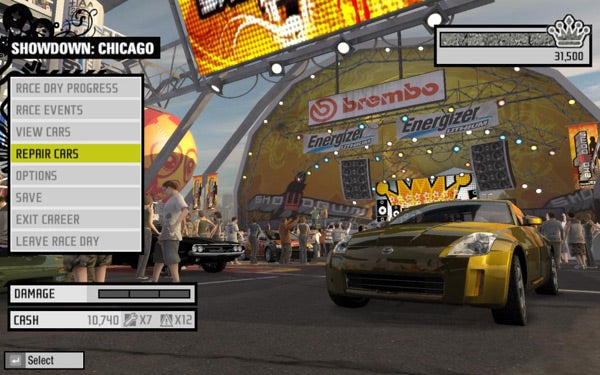 The surprise – particularly if you’ve seen some of the more hostile comments floating around – is how competently ProStreet handles everything. EA has rebuilt the Need for Speed physics engine, and the result is much improved, more realistic handling provided you’re sensible enough to play it on the highest ‘King’ realism setting (on the lowest setting your average five-year-old could make it around the track, but the driver aids are too intrusive to make the experience even slightly satisfying). EA has done similar work with the AI, and while it’s not quite as aggressive as we’d expect from a TOCA, we’re certainly not in the ‘line up in an orderly fashion then process around the track’ realms of Gran Turismo. I’ve been cut-up on corners. I’ve watched them take a turn too fast and go careering off into a barrier. I’ve even caught them drafting behind me then speeding past for the final stretch. In short, there’s more than just the handling to give you a decent gritty challenge.

The car line-up isn’t going to give Forza or Gran Turismo any scares, but it’s large enough and extensive enough to cover a reasonable range of US, Japanese and European makes and models, with BMW, Ford, Shelby, Chevrolet, Dodge, Volkswagen, Toyota, Mitsubishi and Subaru all getting a pretty good airing. What’s more, the career mode even contains a fairly deep customization system. It’s based on blueprints – with more than one available for each car – and features many of the engine, turbo, suspension, brakes and body upgrades that you’d expect from a more serious driving sim. Need for Speed’s traditional meat-head audience can still choose auto-customisation or simplified options, but it gives the petrolhead tweaker something to get their teeth into. 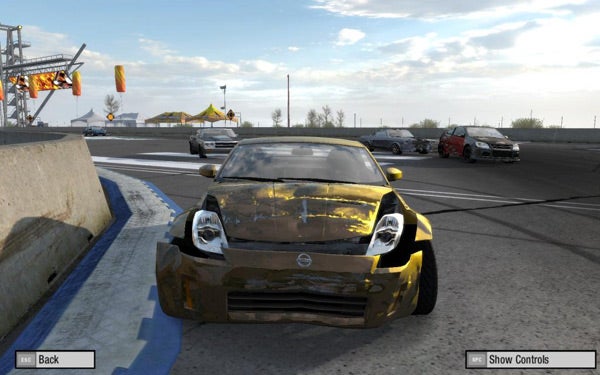 ProStreet even crams in a respectable damage model. Like Forza’s it’s a little bit generous and it tends to jump between basic side/bonnet damage and a full-on write-off in a way that makes you suspect the manufacturers were squeamish about too much on-screen crumpling, but it does make you think twice about taking the bumper-car approach to driving or using the side barriers as steering aids. In fact, the game even makes you pay for damage to your own cars between retries, so you tend to think a little more carefully about constantly restarting the same race as well. 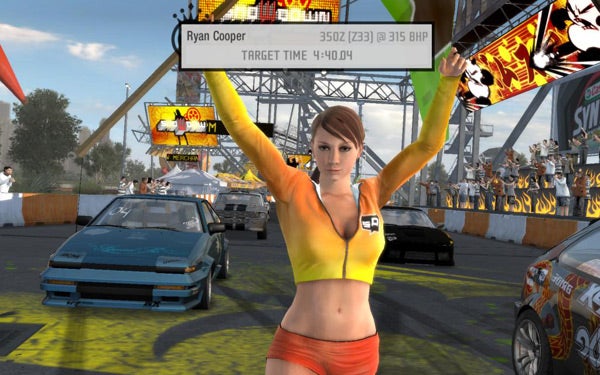 Visually, ProStreet’s not bad at all. Played on my current monster system with an Intel Core 2 Extreme 6850, 2GB of PC6400 DDR2 and an Asus GeForce 8800 Ultra, it actually looks more impressive than Forza, partly because EA has gone overboard with billboards, balloons and other bits of trackside detail (if you don’t like in-game advertising, you might find it all rather repulsive). The car models look fantastic in their fully reflective, nicely lit, realistically shadowed glory, and the overall presentation is very slick indeed. 360 owners might have a better looking option in Project Gotham Racing 4, but PC owners used to GTR2 will certainly see a big difference. I’d have to ask why it still stutters on the odd corner as the view swings around, however. This system plays Crysis on High, for goodness sake! 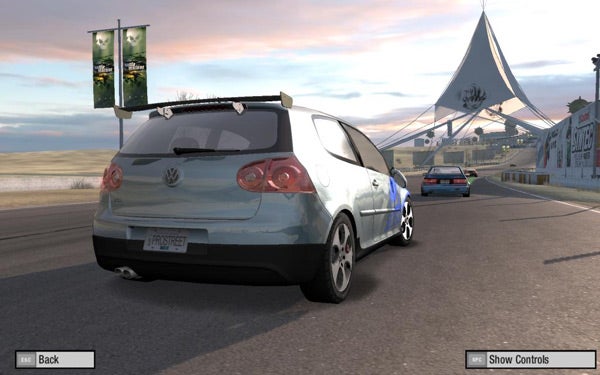 Given all the above, ProStreet sounds like a strong new direction for EA’s cash cow franchise. Sadly, I can’t hand on heart say that it is. For a start, there’s still something a bit cold and uninspired about the racing – a problem I also found with Gran Turismo 4 and Forza 2. Whether it’s the track layouts, the AI or the difficulty level, winning doesn’t seem to be as much about high-speed thrills and risky chances as it is about getting the car right and polishing your technique until it shines. The other disciplines, meanwhile, aren’t actually as much fun as they sound. The drag racing routine of warming up your tyres then getting a good start and perfecting each gear change soon gets old, while the drift racing is comprehensively outclassed by Project Gotham’s take on the same theme.

What’s more annoying is the whole ‘street attitude’ of the thing. I can see why it’s there, and the graffiti graphics, the race-day atmospherics, the flag-waving bimbettes and the MC commentary do give the game a buzz that similar racing titles are usually missing. All the same, the music, the repetitive dialogue and the constantly in your face style really do grate on your nerves after a while. At its worst, playing ProStreet is a bit like playing Forza 2 in a teenager’s bedroom while some ropey dance/indie/emo/nu-metal compilation blasts out of the stereo at full volume and MTV’s playing loud in another room. Were I fifteen years old I might think differently, but all this stuff actually hindered – not helped – my enjoyment. 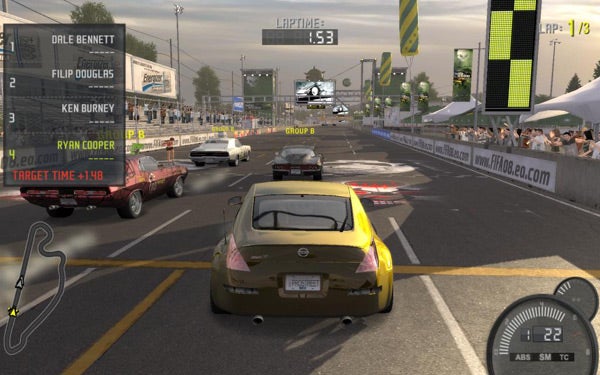 On the plus side, ProStreet does have two major saving graces. First, there’s not anywhere near as much competition on the PS3 or PC as there is on the 360 for this sort of thing. If you got this in preference to PGR4 or Forza then I’d say you were mad, but PC gamers who fancy something that sits in between Need for Speed: Most Wanted and GTR2 might get some mileage out of this one, as could PS3 owners looking for a game to keep them going until GT5 swings around. Secondly, EA has put a lot of effort into the online modes. It’s easy to find and join an online ‘Race Day’ or create your own, and you can also upload and download shadows to compete against, car blueprints to do time trials in and a host of other goodies. In this respect, ProStreet is only just behind Forza 2 on features. The action, meanwhile, seems to be relatively lag-free. 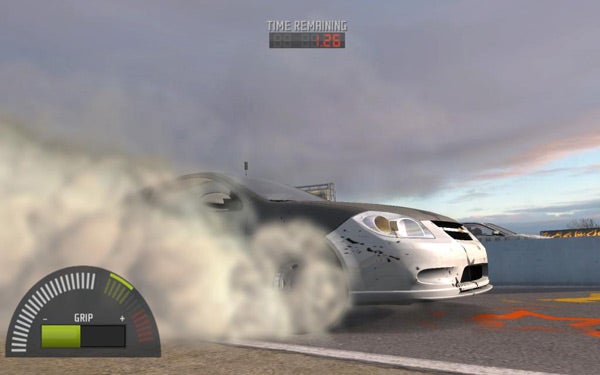 Still, overall the new direction has done little to stem the downward slide the Need for Speed series has taken since the much-loved Most Wanted. What EA seems to have missed with both ProStreet and Carbon before it is that what we really want isn’t a bold departure or a return to Underground form, but a bigger, better Most Wanted with more locations, more variety and a little more finesse. I can’t blame ProStreet for not being that game, but taken on its own merits it simply doesn’t deliver the right amount of speed, spectacle or fun. It’s a solid game – even a fine one from time to time – but it’s not a game to get all that excited about. And excitement is what we need to see from Need for Speed when it resurfaces again in twelve months’ time.


Need for Speed goes straight, but the thrills have gone AWOL. ProStreet is a competent attempt to take the series upmarket, but can we have the old bad boy glamour back next time?