Available on PS4, Xbox One and PC November 10

While its heroes are looking for the title’s payback, EA’s racing series is in desperate need of a comeback. It’s now years since Need for Speed last dominated the Christmas games charts, and Ghost Games’ previous efforts – Need for Speed: Rivals and plain Need for Speed – did nothing to put the series back on top.

Need for Speed: Payback might have had a chance to change that, had Ghost and EA not hobbled it with a progression system that’s, at best, unwieldy and counterproductive and, at worst, a cynical bid for extra cash. While my worst fears about the game haven’t quite been realised, Need for Speed seems hell-bent on antagonising and boring its players when it could be letting them have fun.

And fun is what this game should be about. One of the things I like about Payback is that it knows what Need for Speed is. It isn’t trying to be a serious simulation or an authentic experience of racing; it’s happy to be a dumb racing game for armchair adrenaline junkies who – like the writers – have overdosed on their Fast and the Furious boxsets.

The handling is roughly as convincing as the cliché-packing script, but it’s enjoyable. You can throw cars around, smash them into barriers, slide the back end out in a satisfying fashion, and use nitrous blasts to right your course or steam past the competition to grab first across the line.

There’s enough sense of weight, grip and momentum to tell you that you’re racing a Mustang, a Subaru Impreza or some exotic hypercar – but not enough to leave you spinning uncontrollably when you take some ridiculous right-turn.

Vehicle damage is purely cosmetic, and even a hard shunt or head-on collision won’t cause you any serious grief. This is a cheap, easy thrills kind of racer, and a lot of the time it works brilliantly on those terms. 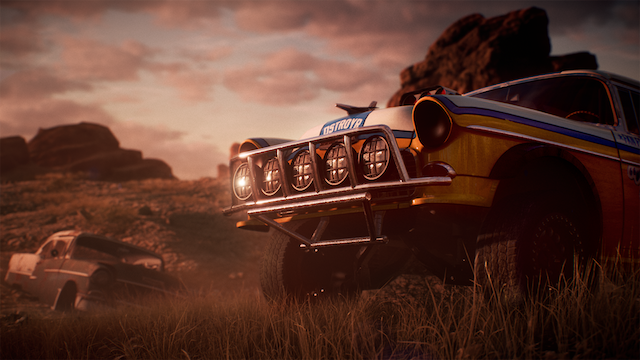 I also like the way Payback splits off its activities, with three protagonists: street-racer Tyler, wheelman Jess, and extreme-racer Mac. Each tackles different shady driving disciplines in their quest for revenge on the all-powerful gambling syndicate that runs Fortune Valley.

Tyler takes the straight street races and drag races – cool, stripped-back speed duels where it’s all about timing (and boosting to) the next gear change. Mac handles off-road racing and drift challenges, meaning he gets the craziest events in the game. Jess, meanwhile, takes on getaways, police pursuits and the odd, weird courier mission, using toughened SUVs and sports cars to smash her way through chasing cop cars and police barricades.

Each ‘quest line’ of events leads to a final face-off against the leader of a street-racing gang. This unlocks a big story mission that brings all three drivers together, then takes you through to the next tier. There’s nothing here that’s even vaguely innovative, while the constant chatter grows annoying. However, the structure means there’s always something different to pique your interest, and something else to do if you’re struggling to make headway. 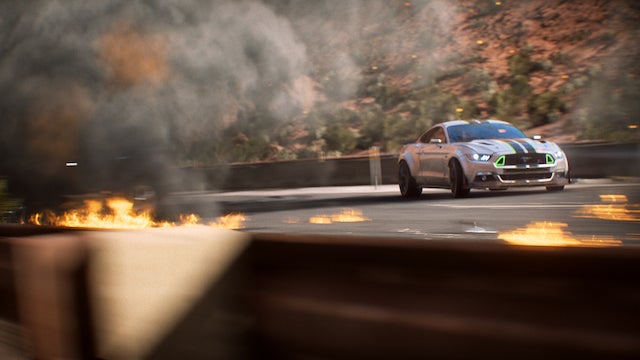 More importantly, the actual events are consistently entertaining. I’d like a little more Burnout-style risk and reward in the street-racing challenges, but Payback makes speeding through the streets, dodging the oncoming traffic, or boosting and sliding through the hairpins of a mountain road fun. Ditto for the offroad races, where you can ditch the route at times and take a bumpy, spine-wrecking shortcut between checkpoint A and checkpoint B.

I normally hate drift challenges, but once I had the knack for Mac’s crazy skid and boost moves and multiplier-building, I really got into these challenges. And while the police pursuits are weaker than the series’ best efforts – Hot Pursuit made them more exciting, while Most Wanted’s scenery wrecking to foil chasing cars is sorely missed – they can still be thrilling. It’s just a shame that the game will only let you escape along a pre-planned route.

What’s more, Fortune Valley is a pretty cool place to race around. Payback’s open world setting is effectively a fictionalised Vegas, surrounded by desert, mountains and canyons, with some nice rugged, forest areas on one side of the map. 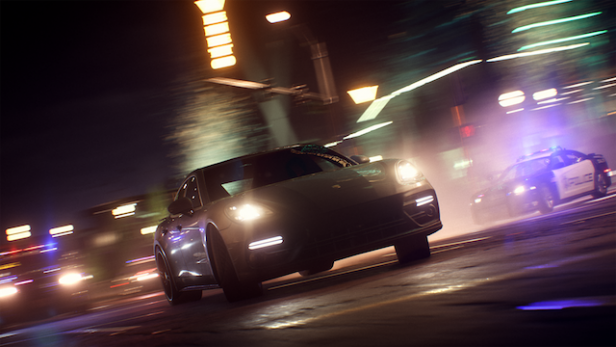 Along with the normal events it’s littered with billboard-smashing challenges, ad hoc racer duels, checkpoint and speed camera challenges – all of them good for keeping you busy when you’re driving from one event to the next. You can also use clues from the different bosses to track down derelict cars and the parts to repair them, potentially providing access to some of the most powerful vehicles in the game.

Let’s make this clear: I like Need for Speed. It’s fast, exciting and often beautiful, with gorgeous Frostbite-rendered scenery and great-looking cars. It isn’t in any way groundbreaking or essential, but it could have been the best Need for Speed since Criterion’s Hot Pursuit in 2010. It’s just a shame that it’s spoilt by a whole lot of grind.

A lot of this comes down to the way upgrades and progression works in-game. You upgrade your car through a system of speed cards, which are either won when you come first in an event or bought from local tuning shops. These represent different enhancements for your engine, exhaust, brakes and suspension, and so on – although each adds to (or subtracts from) an overall rating for your car.

It’s all a bit abstract and slightly ridiculous, but that’s not the problem. What is, is the fact that each individual event has a rating, and to have any chance of winning you need your vehicle to near, match or exceed that score. You can grasp the odd victory when you’re below the rating, but in many cases your opponents will leave you choking exhaust fumes or dust. Or – even more annoyingly – stealing victory in the final stretch. To compound the misery, you can only complete events by coming first. 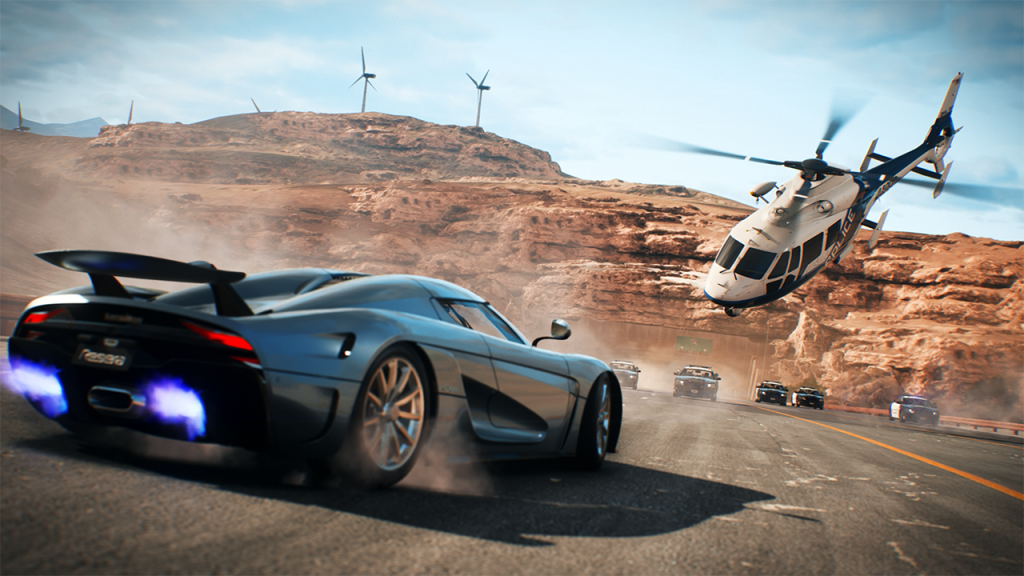 That means you need to go back to the tuners, which will cost you money, or you’ll need to repeat previous races. New speed cards will up your rating, at which point you’ll almost invariably win on your next event. In short, if you can’t win fairly, you’ll need to grind and buy your way through.

You’ll also need to buy cars for the drag and drift events – more cash, more grind – and, later on, new vehicles for racing and off-roading (and you can guess what that means). You’ll also need more cash for time-saving fast travel, without which getting from one event to the next can become a bit of a chore.

Now, I was concerned that this was an effort to force you to buy new speed cards with real cash, but this doesn’t actually seem to be on the menu. What you can buy with real cash, though, is shipments containing cosmetic items and additional in-game moolah, which I guess has a similar effect. 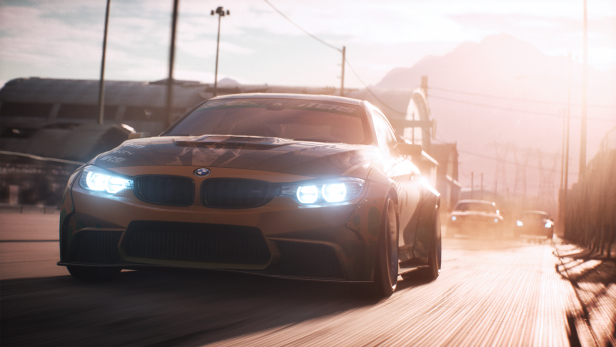 Either way, it seems a bit much to expect players to pony up real money just to reduce the amount of grinding in your game.

To be fair, it’s not all that terrible. Hunt down the derelicts, for example, and you can use one of these as the basis for a new vehicle and save yourself some precious dosh. What’s more, Payback occasionally hits you with free shipments as rewards, and when I realised this was happening, and where to open the loot crates, I instantly discovered a ton of cash.

Certain event chains also seem to be better than others when it comes to dishing out enough loot and speed cards to make the next event possible without additional grind.

Grinding and microtransactions aside, there still seems to be a lot of needless to-ing and fro-ing, just to buy cars, get parts, compete and even change cars. Put it all together and you have a game that should have one foot down hard on the accelerator, but that keeps on braking, hitting kerb and grinding gears.

When you’re racing, drifting, off-roading or being chased, Payback feels like a fine arcade racer in the classic Need for Speed mould. It doesn’t have the glamour or the handling of Forza: Horizon, but it’s scores big on variety, speed and thrills.

Unfortunately, those simple pleasures keep getting spoilt by the amount of grinding and driving around that goes on in-between. Need for Speed was never the most-respected racing series, but it used to be one of the most fun. Payback has too much getting in the way.