I feel like an accessory to the crime by awarding Need for Speed: Heat such a high score, given the blatant theft of Forza Horizon’s entire schtick. But, at the end of the day it works and the few additions that Heat does bring to the formula help it stand apart. Need for Speed: Heat is a return to form for the series, and a great foundation to rebuild the tattered franchise on.

I feel the need – the need to knock off a superior racing franchise. Need for Speed has been in a rut for years now, with the last few games being poorly received by critics and fans alike. But after a few stalls on the grid, EA have finally surged into contention with a winning strategy – just making a street racing version of Forza Horizon.

While it sounds like I’m damning with faint praise, Need For Speed: Heat is a welcome return to form for an iconic series that has languished for so long. And, if you’re going to knock someone off, it might as well be the best. Need For Speed: Heat takes place in a vast open-world playground of Palm City. This obvious homage to Miami and its surrounding countryside is scattered with races, time trials, drift zones, speed traps, and all the other stuff you’d see in Forza Horizon.

The heavily destructible scenery even made the trip over, so you’ll be barrelling through trees, lamp posts, and stonewalls as your cruise around town. Most of them anyway – some objects won’t budge and it’s not always visually obvious which trees are made of tissue paper and which were forged from the heart of a dying star.

The plot is the usual nonsense. Cops are bad and street racers are a bunch of righteous dudes living on the edge. The problem with street racers as the heroes is that they suck – they’re petty criminals endangering lives for kicks. So, to make them the heroes, you have to make the cops into hilariously excessive supervillains, which is exactly what they’ve done. The cops are unhinged psychopaths running a car snatching ring, impounding cars to sell them for mad profit. 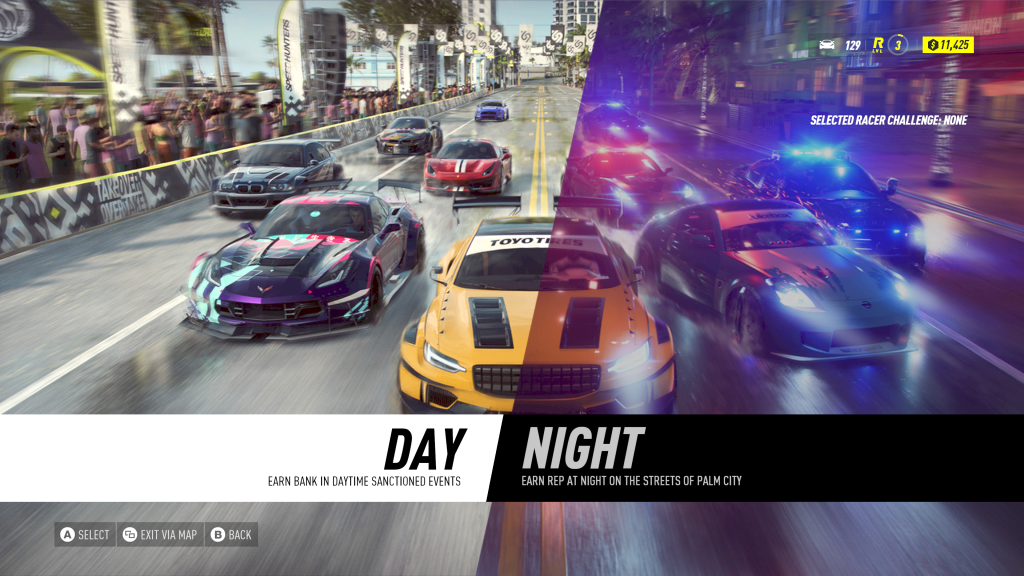 There’s plenty of Dawson’s Creek level drama; a feisty racer looking to prove herself, her brother who quit racing because he “couldn’t handle the heat”, corrupt cops, all that good stuff. Your character is a nameless avatar chosen from a selection of premade ones – mine was the spitting image of Brendan Fraser and I’d love to think that since he disappeared from Hollywood, he’s just been tearing it up on the underground street racing scene.  In the end, it’s difficult to side with, or care about, any of the characters in this Fast & Furious-style angst fest.

Thankfully, nobody comes to a racing game for the Oscar-worthy performances. We’re here for the driving and I’m happy to report that they’ve nailed it with Need for Speed: Heat, for the most part. Your starting car feels like it’s forged from depleted uranium and has the turning circle of Jupiter, but you’ll quickly replace or upgrade it to mitigate these issues. In reality, the heavy steering is to encourage drifting. Need for Speed: Heat is all about drifting and, as a result, it plays more like Mario Kart than any other racer on the market. By lifting off, turning, and then hitting the gas again, your car will transition into buttery-smooth drifts that make cornering a breeze. It’s unrealistic, obviously, but thoroughly entertaining.

When you’re not dealing with those meddlesome corners, Need for Speed: Heat manages to feel quicksilver on the straights. You’d hope so for a game called Need for Speed, but it’s a bizarre and all too common failure of racers – struggling to impart that vital feeling of velocity. Need for Speed: Heat has no such issues – streetlights blur, air rushes over your car, and you almost feel like you’re activating a hyperspace drive when you trigger your nitrous. 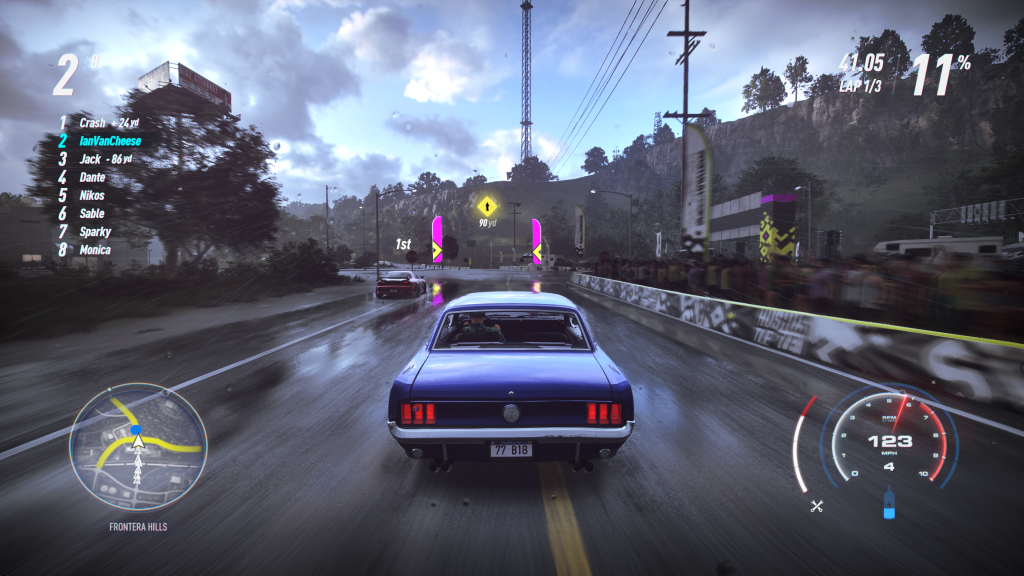 As any petrolhead knows though, it’s not all about what’s under the engine – your ride needs to look the part too and Need for Speed: Heat certainly holds up in that regard. The vast roster of cars is stunningly recreated, while Palm City offers wide array of environments to race through from city streets to backwater swamps. The weather effects are beautifully rendered, though limited to just varieties of rain (I don’t think Florida sees much snow, so fair enough). The night-time lighting is particularly gorgeous, filling your periphery with a blurry collage of neon lights and as you tear through the city streets.

As I mentioned earlier, you can buy upgrades and cars with the cash you earn provided your reputation is high enough. There are a ton of cosmetic options, as you’d expect. Don’t worry street racing fans, you can ruin your cars with gaudy spoilers and purple underlighting. On the mechanical side of the garage, cars stats are simplified allowing you to tailor your wheels to suit different race types. So, you’ll likely end up with a drift car, an off-road car, and a street racer in your regular circulation, all of which will need to be kept up to date with the latest mods. This is where the grind starts to kick in.

Campaign progression is a bit stop-start as you’re gated by your reputation, but it’s a racer and you grind by racing so it’s hard to complain. The real issue comes when you top out your car’s performance and need to upgrade, as new cars come with stock gear. So, in addition to the cost of that car, you also need to upgrade it a ton before it’ll be better than your current ride. This results in some real lurches in the pacing as you need to essentially build up a new car from scratch, which costs a bomb. 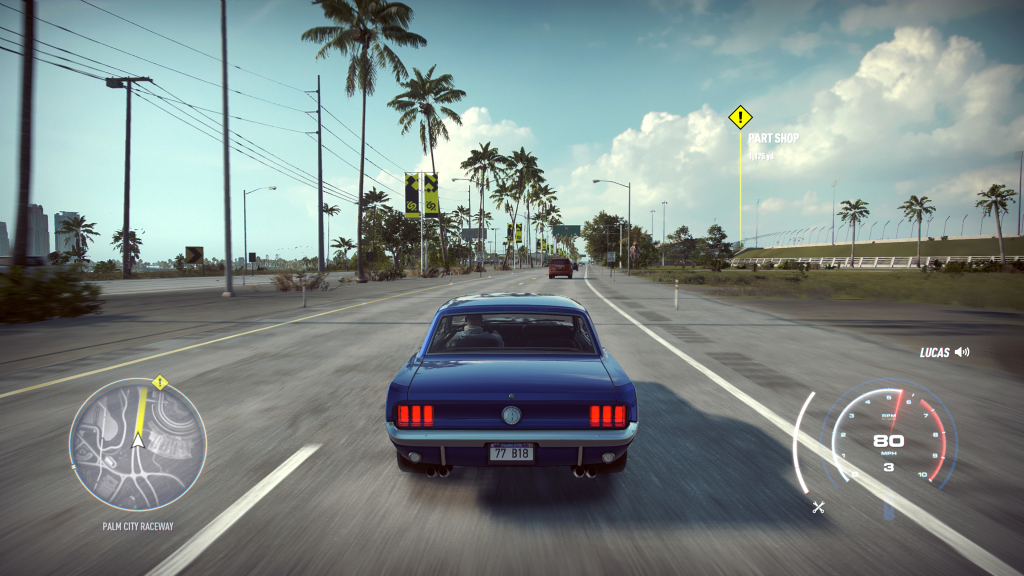 Since we’re knocking off Horizon here, Need for Speed: Heat is a fully online, shared world racer and the feature is as vestigial here as it was in Playground’s racer. You’ll rarely bump into another racer in the overworld and the amount of travelling and load screens you must endure means that HFS: Heat is poorly suited to multiplayer action. It’s a nice option for groups of friends who want to play together at least. Mercifully, you can just play in offline mode, which also means you can actually pause the game. I’ll take a pause button over friends any day.

Need for Speed: Heat’s main unique addition to the Horizon formula is with its day and night system. There’s a driving festival in town, so during the day you can take part in legal races to earn cash. But, because demand for parts is so high you won’t be able to spend any of that cash until you build your reputation up in illegal street races at night. If you can ignore the glaring logic holes in this concept, it’s a rather elegant system and the ability to swap at the touch of a button results in a slick experience.

The titular heat system also only comes into play at night. This is basically a wanted level ala Grand Theft Auto, with police becoming more aggressive and numerous the higher your heat level is. However, your heat level also applies an XP multiplier to your reputation gains, which resets when you visit a garage to end the night. This makes for an interesting risk versus reward balance as you race to build your reputation since you lose the entire multiplier if you get busted.

You can keep racing for even greater rewards, or cash in your reputation and start afresh the next night. This leads to some frantic escape sequences as you scramble away from the law, using every trick in the book to try and lose them to save your night’s work. These moments are infrequent but inject some genuine tension into your criminal activities. 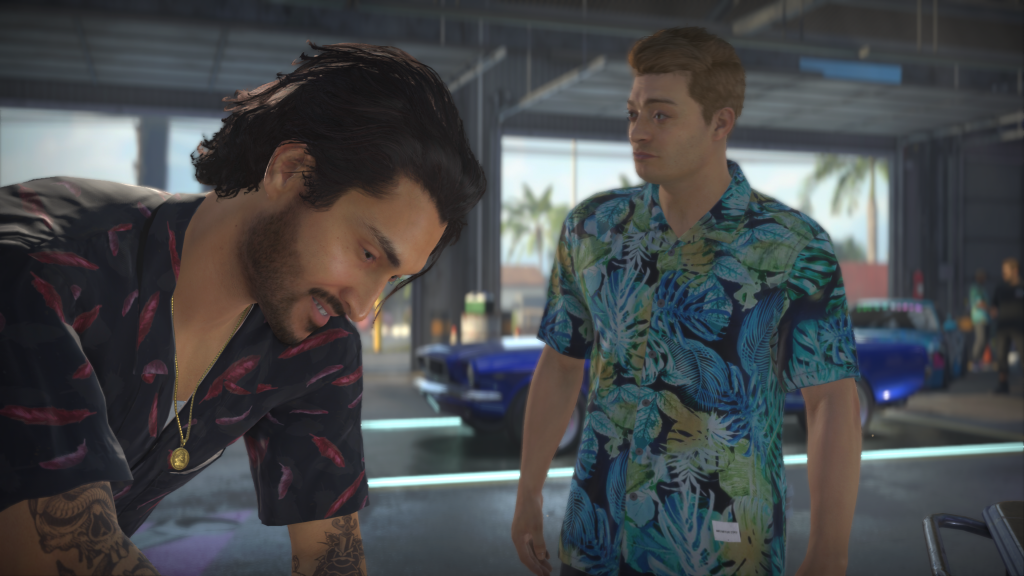 At low heat levels, a single cop car is easy enough to shake off or wreck, but when you start getting hounded by four cop cars at once it can become next to impossible to shake the fuzz. As a result, in the early game you’re often better off just cashing in your reputation after a couple of street races. Later upgrades can kit your car out for wrecking cops or escaping them if you want to go to war with the five-o.

Despite all my complaints and niggles, Need for Speed: Heat is fun and offers a ton of content. Real content too, not Ubisoft content. The driving feels lightning quick, but also accessible and easy to master. It’s ripping off Forza Horizon hard, but if you’re going to emulate someone, it might as well be the best in the business. Need for Speed: Heat isn’t quite on Horizon’s level yet, but this is a welcome return to form for a series that has been lagging at the back of the pack for a while now.

Should you buy Need for Speed: Heat?

I feel like an accessory to the crime by awarding Need for Speed: Heat such a high score, given the blatant theft of Forza Horizon’s entire schtick. But, at the end of the day it works and the few additions that Heat does bring to the formula help it stand apart. Need for Speed: Heat is a return to form for the series, and a great foundation to rebuild the tattered franchise on.

Ian Stokes
Ian Stokes is a freelance games writer whose works can be seen at Trusted Reviews, Kotaku UK, Fanbyte and more. He does it all – news, reviews, guides and features. He's usually found on Twitter yappi…