Available on PC; Xbox One and PS4 coming soon
To know Necropolis is to love it – and, well, occasionally to loathe it too. Like many seemingly simple games it’s much smarter than it first appears, yet also a little too smart for its own good. It almost seems designed to be divisive, expecting you to jump onboard with the whole style and attitude or disappear, and even those of us who take the leap may not love it without serious reservation.

Genius? Well, the central idea is definitely brilliant. Necropolis might look and play a little like a cel-shaded Dark Souls, but it’s actually a roguelike; a hack-and-slash dungeon crawl through procedurally generated levels, complete with permadeath when everything goes sour.

The timing and evasion-focused combat, where every weapon has its own weight and speed, comes direct from the FromSoftware playbook, as does the close third-person view. However, in terms of actual structure, we’re firmly in roguelike territory. That’s important, because if you’re looking for a cel-shaded Dark Souls, Necropolis will drive you round the bend.

Your objectives are simple. Your cloaked and cowled adventurer begins at the top of the titular structure and has to fight his or her way towards an exit at the bottom. A range of monsters will try to kill you on the way, but kill them first and you can hoover up their loot.

Treasure chests may contain more gems or shiny new weapons, and if you can’t find any food or potions (needed to maintain your stamina), you can brew your own from ingredients that you pick up along the way. A setup as minimalist as dungeon crawlers get. 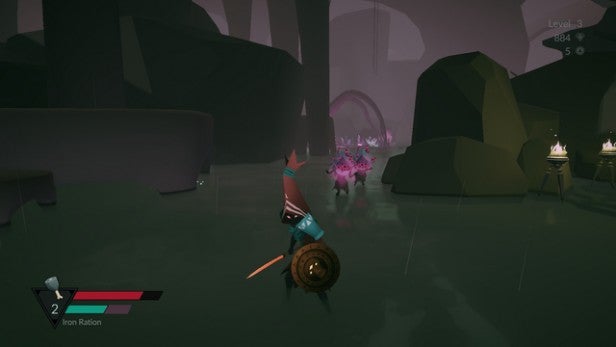 Meanwhile, a floating golden pyramid – The Brazen Head – doles out additional quests, which may or may not include slaughter shopping lists (kill 6 of this or 10 of that), missions to make food or potions, or a request to smash up any pottery around the level.

Doing so will earn tokens to spend on unlocking special chests at the start of each level, or codices (more on these later). Your gems, meanwhile, are required to unlock the door that hides the lift down to the next level, where you’ll also find an item store and a spot to sacrifice gems to get a boost for your vital statistics.

The big stinger, of course, is death. Death in Necropolis is both permanent and a serious pain in the ass, leaving you to start the whole shebang again with no cash, no stats boosts or armour upgrades, and just the weedy default sword and shield. There are no checkpoints, bonfires or respawn points, so the only way to get back to where you were killed is to slog through all over again. Even Dark Souls fans – a notoriously masochistic breed – might find this hard to stomach.

Related: What is Xbox Play Anywhere?

There are two sources of comfort for the recently departed. First, you get to keep your tokens, which can be spent on condices – cryptically named and described books that provide a range of mysterious perks. Bear in mind, however, that it’s unclear what most of these do; their effects seem limited and you can have only one active at a time.

Second, the upside of having procedurally generated levels is that you’re not slogging through the same levels every time. Sure, each one has a visual theme and certain repeated elements, but you’ll face different monsters in different places with different treasure chests and loot drops every time. Even the Brazen Head’s side-missions will differ. 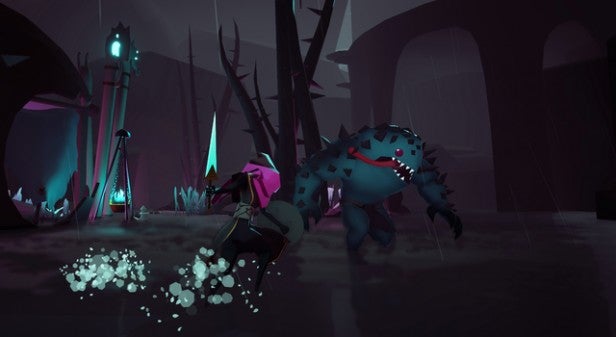 That’s good news, because you’re going to die a lot. At first you may struggle with the combat; weapons tend to be fast but weak or powerful but slow, and it takes practice to get used to the shield block-and-bash moves, the quick sidestep manoeuvre and the way each weapon’s special attacks work out.

You see, each sword, axe or club can be charged by holding the R1 or R2 buttons, unleashing a spectacular flurry of blows, but at the cost of a loss of control and (worse) an almost complete loss of stamina. It isn’t something you want to do and miss.

What’s more, while the enemies are mostly dumb and often easily dispatched, all can be deadly in large numbers and some have brutally effective attack patterns. You’ll learn to block and dance your way around these, but only by dying stupidly several times.

Necropolis isn’t totally brutal, dishing out plenty of food and crafting elements, but you really need to stay on top of your health at all times.

Even then you’ll find things tricky. The downside of having procedurally generated levels is that you can’t guarantee which monsters you’ll encounter where within that level, and that you may have to slog through much of a level without finding a weapon that’s really up to the task.

I’ve been known to cheer when an early chest gives me something half-decent on level 1 or level 2, let alone level 5 or 6. The arms and armour locked away at the beginning of each level can help, but even then there’s a danger that you’ll find something that just doesn’t suit your fighting style. In one run you may get a gauntlet that throws out fireballs, while in another you get a spear with a ridiculously slow attack time. 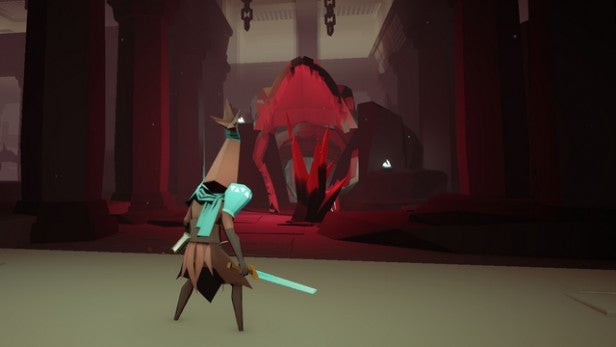 And Necropolis doesn’t always play fair. True, you can sometimes trick dumb enemies to fight each other, or use a doorway or stair for tactical advantage, but you’ll sometimes groan to see a whole cadre of double-hard fiends waiting for you or several of the nasty crystal structures that spawn tough enemies placed together.

At one point, I’d just fought my way down to a brand-new level only to find an incredibly tough variant of a previously weak enemy through the first door. This didn’t end well. Faced with the thought of another 60-minute struggle to get back to the same point, I went off to bed instead. And as for enemies that spawn suddenly behind you – has this ever been a good idea in a roguelike game?

In a way, it’s churlish to complain. Necropolis is a roguelike and the permadeath is part of the thrill. In its neon-lit, minimalist way it’s lovely looking, while it creates heroes and villains of real character from fairly basic shapes. The slightly dull and repetitive corridors and chambers of the early levels become weird jumbles of cyclopean architecture and fedit swamps, and the world becomes a more interesting place.

You grow to love the slow-paced exploration and fast-paced action, not to mention the game’s dry wit. From the Brazen Head’s droll commentary to the darkly humorous inscriptions on the walls, it’s a funny game. Its refusal to give too much away is part of its charm, and the same goes for a predilection for brutal slapstick and vomit-inducing potions.

Yet when it can take upwards of an hour to reach level 4 and another half-hour or more to get to level 6, it’s hard not to feel a little frustrated. Levels 1, 2 and 3 begin to grow tiresome. Do you really have to go through it all again? In a way, it’s great that the only way to get further is to get better – and you will do both – but would some mechanism for skipping levels have killed the overall experience? 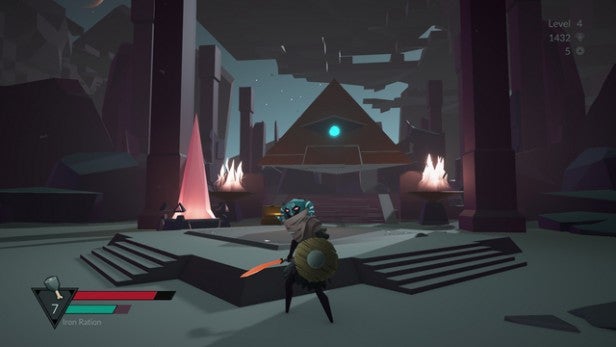 Playing drop-in, drop-out multi-player helps, but its no panacea. On the one hand, you can revive downed players, meaning death is no longer the end. On the other hand, friendly fire, splash damage and increased enemy numbers ensure that no level is a picnic, and every player needs to be committed to reviving.

Perhaps that’s why there’s no matchmaking or game-browsing, meaning you can only play with friends. If so, it’s an annoyance, since not all of us have three friends with their own copies of the game with whom to play.

As I said, it’s a game touched by genius but a little too keen to shoot itself in the foot if it will cause you, the player, a little extra pain. It’s always fun, always interesting and never less than addictive, but sometimes this isn’t enough to get you through the grind of the first few levels for the umpteenth time.

And while I’m sure that the team at Harebrained Schemes could easily fix this, I’m not so sure they can do it without alienating those who really love their game.

Verdict
Necropolis is destined for a lot of love/hate reactions. It’s fun, challenging, stylish and sardonically cool, but frustration is coded into its roguelike DNA. With a few tweaks and online matchmaking it could still be a minor indie classic – it’s surprising how hard it is not to go back in for another run – but it’s a game that needs some work if it’s to please a wider base of fans.