If we had to sum up our previous experience with NEC flat screens, we’d probably have to go with ‘solid’. For while they’ve excelled in one or two areas – most notably their detailing and freedom from video noise – they’ve also tended to come a cropper elsewhere. Usually their pricing, lack of domesticated features, and black levels.


But we find ourselves unboxing the brand’s latest 50in offering, the 50XR6, with a greater feeling of anticipation than usual. Why? For the simple reason that NEC’s plasma TVs now herald from the factory lines of Pioneer. And if there’s one plasma brand you really don’t mind putting your screens together for you, it’s Pioneer. Is it possible that the 50XR6 might reach the same dizzying performance heights that Pioneer’s own new KURO models have done?


Before we find out, it’s a little disappointing to find that even though it belongs in what NEC calls its ‘residential range’, the 50XR6 doesn’t really seem very bothered about the domestic UK TV market – it sports no built-in tuner or SCARTs, while stereo speakers are an optional extra rather than being included in the £1,250-ish price. And at £300, they’re hardly the most affordable optional extra we’ve heard of… 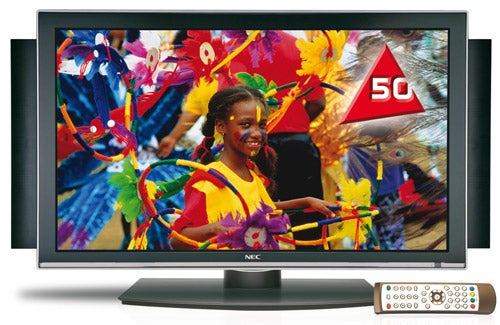 Of course, though, it’s entirely possible that the sort of person who might be interested in a 50XR6 might not actually need any of the absent features just listed. For example, a high-level AV system would surely have a Sky HD receiver for TV duties (complete with HDMI or component video output meaning there’s no need for SCARTs), plus a separate home cinema sound system.


Nonetheless, we still can’t help but be concerned that the lack of interest in home users shown by the missing domestic features will also colour its performance, with images that favour PC users over film fans.


Getting into stuff the 50XR6 ”does” have, the first thing to catch our eye is a surprisingly smart design delivered courtesy of a minimalist matt-black fascia and impressively lean bezel. Next, while connections may lack tuner or SCART inputs, you do get a pair of HD Video-capable HDMIs, two component video inputs where many flat TVs only give you one, a D-Sub PC port, and an RS232 control port for system building. Plus it turns out that you can attach a SCART to one of the component ports via a suitable adaptor. But then NEC hasn’t actually bothered to include one of those adaptors in the package.

Having recently seen a similarly priced 50in plasma TV from Samsung that sports a full HD pixel count, it’s perhaps slightly disappointing that this screen only carries 1,365 x 768 pixels. And with many plasma TVs now routinely offering claimed contrast ratios in excess of 10,000:1, the 50XR6’s 3,000:1 doesn’t look too clever either.


But we can at least put a positive spin on this contrast figure since it’s the same as that quoted by NEC’s now sister brand Pioneer for its previous (non-KURO) generation of plasma TVs – and that figure turned out to be, in our estimation, pretty conservative.


There’s one more piece of bad news to report, though: namely that the HDMIs do not take 1080p sources. Or at least they didn’t during our tests. According to NEC’s official specifications for the screen, 1080p/50/60Hz should be a goer (although 1080p/24fps signals of the sort carried by most UK HD DVD and Blu-ray discs are definitely not on the menu). But the screen remained resolutely blank with our 1080p/50/60Hz sources. 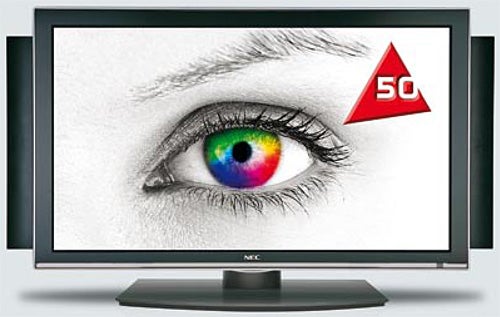 Oops – we’ve strayed again into covering stuff that the 50XR6 does not do. Sorry about that. Returning once more to positive territory, we find a handy suite of picture-in-picture tools, six memory spaces for storing preferred picture settings, direct pixel mapping of native 720p sources (should you actually manage to find any in the UK), and a cinema mode that tweaks the progressive scan processing to suit film rather than video/PC sources. Oh, and before I forget: there’s also the facility to zoom in on the picture by up to 900 per cent. If you can think of a compelling need for such a feature, feel free to let us know…


It’s hard not to reflect at this stage that although the NEC 50XR6’s features count isn’t bad, it doesn’t tally with those of Pioneer’s own-branded plasmas quite as much as we might have hoped. Thankfully, its performance does.


Or at least, it tallies with Pioneer’s previous plasma generation. There simply isn’t the same sort of black level depth or colour extension that we’ve loved on the new KURO sets. But even if Pioneer is only deigning to give NEC its previous-gen technology, that’s still more than good enough to make the 50XR6 instantly the finest plasma screen ever to wear the NEC brand.


Take, for instance, its fine detailing. Lovely, crisp HD sources such as Pirates of the Caribbean on Blu-ray look blisteringly sharp and packed with detail to a degree that falls far less short of full HD screens than you might think possible for a 50in 1,365 x 768 screen.

Furthermore, the 50XR6’s images are exceptionally clean, with practically no sign of common plasma nasties like colour striping, fizzing noise in dark areas, or dithering noise over motion. Plus, of course, there’s no bother from the sort of resolution loss over moving objects that you get with LCD technology.


Predictably, given NEC’s new Pioneer connection, the 50XR6’s black levels are streets ahead of previous NEC offerings. Dark films like Die Hard 4.0 thus look impressively cinematic as you’re freed from the necessity of squinting through low-contrast greyness like you have to with lesser flat panel TVs.


As you’d expect, the 50XR6’s better black levels also benefit its colour response, helping it produce richer, more vibrant tones than many a flat-screen rival – even those from more traditionally ‘domesticated’ brands. 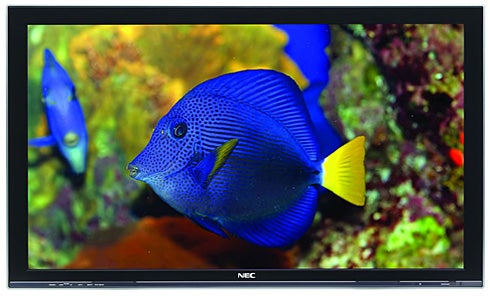 Really the only way to find any chinks in the 50XR6’s picture quality armour is to compare it with the best points offered by rival brands. And so we could say that Pioneer’s KURO TVs and Panasonic’s new Viera models produce even better black levels and colours. However, taken on its own merits alone, the 50XR6 is never less than hugely enjoyable to watch, especially when HD is your source of choice.


We managed to get hold of a pair of the 50XR6’s optional speakers – and remarkably found them even more outstanding than its pictures. The volume they can pump out is prodigious, for starters. But more impressive is the exceptional dynamic range of the soundstage and the clarity of detailing within it. Indeed, few flat TVs have ever sounded this good.


In sheer performance terms, the 50XR6 is a revelation for NEC, clearly benefiting in spades from the brand’s new Pioneer connection. And thanks to some recent and rampant price cutting online, it’s also remarkably good value by NEC standards.


The greater domestication and feature sophistication of rival 50in models like the full HD Samsung PS-50P96FD (reviewed only last week) and Panasonic’s terrific HD Ready 50PX70 (now selling for under £1,200 in some quarters) might still ultimately divert your attention away from this new, improved NEC effort. But the fact that it is now seriously even competing with such big consumer electronics names is something NEC should rightly be proud of.