It’s been some time since Dell released its first 24in display, which broke new ground for being a 24in screen that was actually affordable and established 1,920 x 1,200 as a resolution to be aspired to. NEC is rather late to the 24in party and so has decided to go a little better and release a 26in display. It has a 24in unit too but the LCD2690WUXi is certainly the daddy, stuffed with almost every bit of technology that NEC could throw at it.


I attended a launch event for this display way back in October so it’s been a long wait for this unit to actually get to our offices. Anyone hoping that the move to a 26in size brings with it the super high 2,560 x 1,600 resolution offered by Dell’s 30incher will be disappointed – this is still 1,920 x 1,200. However, a few minutes in front of this unit and you can’t fail to be impressed. Other specs of note are a claimed 800: 1 contrast ratio and 400cd/m2 of brightness. There are two DVI sockets on the rear and one D-Sub – and you can connect to all three of them at once and switch between them – a technology that NEC calls Ambix3. Both DVI’s are HDCP compliant, though for some reason this is turned off by default so you have to go into the OSD to turn it on. You won’t find component, S-Video or composite connections though, which will reduce the displays appeal to the well-heeled console gamer. The cables at the rear can be run up the stand via clips and hidden by a rather basic cover. 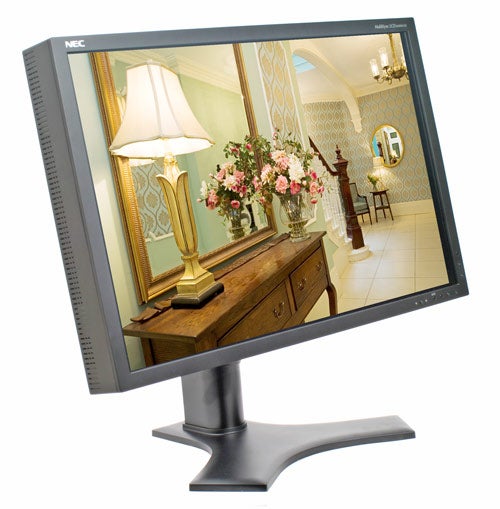 The LCD2690WUX makes quite an impression when you take it out of the box, (which incidentally contains both VGA and DVI cables, – good to see.) The monitor is very large. A 26in display is never going to be a shrinking violet when placed on the desk, but it’s the depth of the display that really surprises – much deeper than a Dell 2407. However, the bezel is relatively thin, which is what you’ll be looking at most of the time.


Rather than having the OSD buttons located in the centre, NEC’s 90 series places them at the bottom right. The control system is simple – two rocker switches for up/down and one for right/left and what these do appears on the screen in the corner as you press them and there’s a single button to make a selection. I found it to be one of the best OSD I’ve used. By default only a basic list of options is available. To get to the rest you need to hold down the power button and the input button and then a control button. 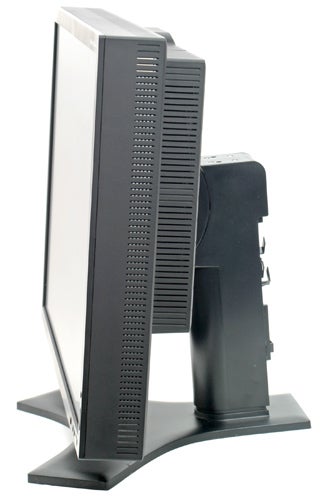 The dark colouring and angular curves are smart and business-like, which is just the market that this is being aimed at. The stand isn’t as overtly designer as even the Dell 24 and 30in monitors let alone Apple screens, but it looks good and is fairly sturdy. Height adjustment is present and correct and it goes really high – perfect for showing off that design or drawing to colleagues. What it surprisingly doesn’t have is a rotating stand – which seems like a strange omission on something that’s likely to be in a design or information sharing environment. On the upside the advanced -IPS A-TW Pol. (Horizontal IPS with Advanced True Wide Polarizer) technology used in this panel ensures that the you can still see the image from right out to the sides, with almost no colour shift.

What you can do is pivot the screen round into portrait mode, though the brightness level drops slightly when you do this. It can also be tilted forwards and back. Should you wish to take it off the stand, the NEC has VESA compliant holes for attaching to a wall bracket.


While the LCD2690WUXi doesn’t use the LED backlights of the NEC’s advanced SpectraView range, such as the SpectraView Reference 21 we looked at in November 2005, it does feature an additional two fluorescent bulbs in the rear to help keep even lighting across the display. This is one of the reasons for the chunkyness of the panel itself.


Even without LED backlights even accurate lighting and colours is one of the fortes of this display. Perhaps the key feature is the 12-bit gamma lookup table (LUT), which gives is the ability to display up to 16.7 million colours out of a palette of 68.5 billion – covering 92 per cent of Adobe RGB space, which is very important for print work. To control this NEC supplies Gamma control software, and you’ll also its Naviset software, which integrates with the display driver and enables you to optimise the picture with great precision. This is vital for professional photographic work or even the medical profession. Some medical images use colour to reveal the health of a patient so a colour accurate display is vital to give a correct diagnosis. ColourComp is a technology that’s used to even out the uniformity of the whites and colours of the display, though at the expense of absolute brightness. 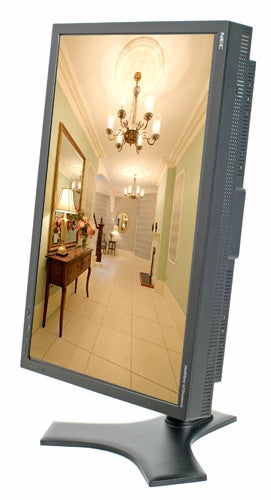 This level of control is possible as the NEC supports DDC/CI – Display Data Channel – Command Interface, providing two-way communication between the display and the computer, enabling the monitor to report its state to software. This means that the display can be carefully calibrated to give the accurate and consistent colours.


Corporates will appreciate the power management technology the NEC has placed inside the LCD2690WUXi. An ECO mode can be set to reduce brightness by either 25 or 50 per cent, which can have a big impact on power draw. IPM (Intelligent Power Manager) will put the monitor into a low power state after either when then it loses an input signal, which you’d expect, or ever when the light level goes below a set level. That’s pretty cool, as when workers go home and leave their monitors on it will turn itself off when the lights are turned out. There’s also a built in timer so it can be set to come on and off as required. There’s also a ’Vacation switch’ at the side that will turn off the monitor completely so it draws no power if you’re away for an extended period.

Other options inside the advanced OSD include the ability to turn overdrive on or off. This overboosts the voltage going to the pixels to get them to twist faster reducing response time – making them respond more quickly. However, this is at the risk of losing colour accuracy.


One of my first actual tests for this display was playing TrackMania – one of my favourite titles, with plenty of bright colours and fast motion and I could swear that it did seem less smooth than when I played it on the ultra low response time 20 and 22in screen I’ve looked at recently. However, the overdrive setting did seem to help in the regard.

The overwhelming feature that really came across when testing this monitor was its level of sharpness and the strong true colours. Looking closely at photos on this display next to a 24in Dell 2407 was like seeing them with my glasses cleaned. There was lots of visible detail and true vibrant colours without being oversaturated or forced, while the DisplayMate tests showed a beautiful progression in the colour and greyscale scaling tests.


Contrast and colours seemed to improve when we kept the brightness levels down. Turning off all the ECO modes, and brightness settings and turning everything up to the max showed that this monitor can go really bright when it’s pushed, but you wouldn’t want to work in front of that for extended periods. The displays also put in a very fine performance with video, which was smooth and again benefitted from plenty of detail in show areas. 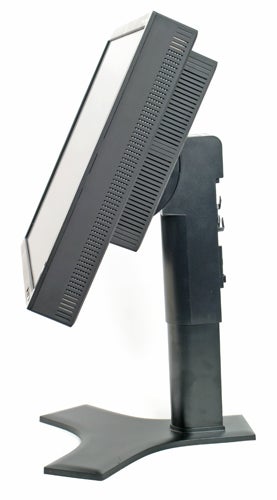 Compared to most monitors the NEC MultiSync LCD2690WUXi is akin to a Maserati, classy yet stuffed with toys and offering blistering performance. Yet most of us will do fine with something a bit less refined – the Dell 30in is a case in point. While the NEC certainly would make for a great gaming display, gamers with money to burn will be better off going the whole hog and saving up for that Dell 30incher, which you can pick up for around a grand, though you’ll need to go SLI or CrossFire to really be able to power it and factor in that additional cost.

While gamers will find much to enjoy on the MultiSync LCD2690WUXi the Dell 30in will offer better value. However, for those who are looking to finally replace a much trusted CRT or go properly large for professional use, the NEC is a very fine choice. It offers a good chunk of the ability of the SpectraView Reference 21 without the huge cost, while offering a larger size and greater resolution to boot.