Back in June I reviewed the NEC MultiSync LCD3090WQXi 30in monitor and was, quite simply blown away by how good it was. Even now I still miss having that screen on my desk – there really is no better 30in display out there, although you’ll have to dig pretty deep to afford one. And that’s pretty much the story with NEC monitors – they’re generally very impressive bits of kit, but they don’t come cheap. It’s therefore no surprise that the monitor I’m looking at today, the NEC MultiSync LCD24WMGX3, follows the same formula. 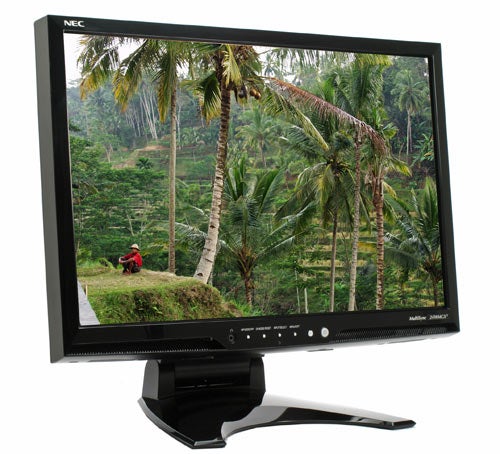 As its name suggests the LCD24WMGX3 is a 24in display, but unlike the LCD3090WQXi before it, this screen is aimed at the gaming and entertainment market, rather than appealing to professional image editors and photographers. As such, the LCD24WMGX3 looks very different from its 30in and 26in cousins, not necessarily better or worse, but different. The most obvious difference is the piano black, glossy bezel, which instantly labels this screen as a consumer display rather than a business one. The other big difference is the design of the stand, and it’s here that the LCD24WMGX3 disappoints slightly.


Whereas NEC usually equips its monitors with every adjustment feature under the sun, the stand on this 24in model is somewhat limited. On the plus side it does have height adjustment, but not the gas dampened, vertical movement that I’ve come to expect from NEC. Instead this stand uses a double hinged design, which means that when you lower the screen it gets physically closer to you, while the reverse is true when you raise the screen. This isn’t a major issue, since you generally don’t mess around with the height of your screen too often.


What is more of an issue is how stiff both the height adjustment and screen tilt hinges are, which makes it difficult to make delicate adjustments to either. Add to that the fact that there is no pivot function, thus ruling out a portrait mode, and it’s clear that NEC has compromised on the LCD24WMGX3’s stand. 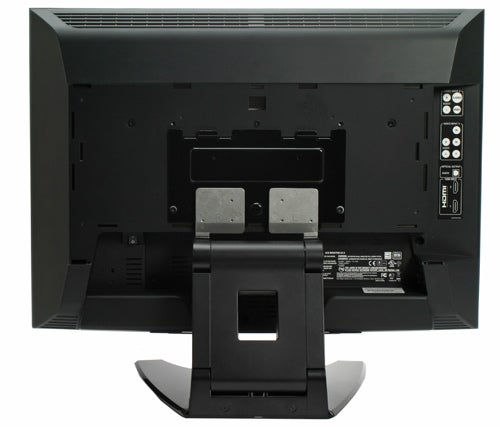 The good news is that the stand is about the only aspect of the LCD24WMGX3 that’s disappointing, which is why I thought I’d get it out of the way early on. When it comes to connection options for instance, NEC has pretty much all the bases covered. Digital connections are well catered for with on HDCP compliant DVI port along with two HDMI ports. You also get a set of component video inputs, D-SUB, S-Video and composite. There’s also a plethora of audio connections, since the LCD24WMGX3 has built-in speakers.

Obviously the HDMI ports can carry digital audio as well as digital video, but you also get a 3.5mm input for analogue audio to go with the D-SUB and DVI inputs, while two sets of left and right phono inputs marry up to the component video and S/Composite inputs. You also get a 3.5mm audio output to pump the signal to external speakers, as well as an optical digital audio out, which will let you send the digital bitstream from your HDMI connections out to an external amp or receiver. Finally, there’s a headphone socket on the front of the monitor, which saves you the trouble of having to plug headphones into your PC, which could be under your desk. 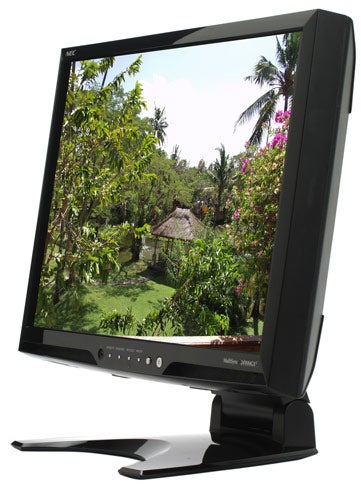 There’s also an impressive amount of options to play with in the OSD, but unfortunately the LCD24WMGX3 doesn’t sport the same corner based button layout at the 30in LCD3090WQXi. This isn’t the end of the world, but it does mean that adjustments aren’t quite as easy and intuitive as on NEC’s flagship monitor, and considering how extensive the list of adjustments is, that’s something of a shame.


You’re going to need to get familiar with the extensive array of controls though, if you want to get the best out of this monitor, since it needs some quite delicate calibration. NEC warned me that this sample had come straight from a gaming event, where it was configured to be as bright, vivid and punchy as possible. Firing up Display Mate showed that the LCDWMGX3 has a tendency towards compression at the high or low intensity ends of the spectrum, and it took a good deal of tweaking to overcome this problem. The good news is that once this screen is configured properly, it’s pretty damn good. 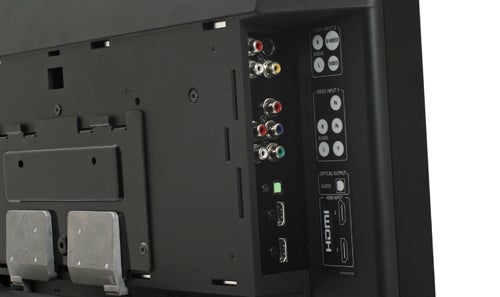 It’s always worth remembering that Display Mate is designed to highlight weaknesses in a monitor when it comes to pure image quality, and that doesn’t necessarily mean that those weaknesses will show themselves in everyday use. This is even more true when a monitor is designed for gaming and entertainment use, as this one is. If you’re spending most of your time playing games or watching movies, you probably want your screen a bit more punchy and vivid, and the LCDWMGX3 definitely delivers in this respect.

Firing up Call of Duty 4 (PC version) on the LCD24WMGX3 left me in no doubt of its credentials as a gaming monitor. Colours are vivid and bright, but most importantly, black levels are suitably dark. Thankfully the relatively deep blacks don’t come at the expense of detail in low light areas, which is pretty important when you’re playing a game. As already mentioned, you need to make sure you get your calibration right though. 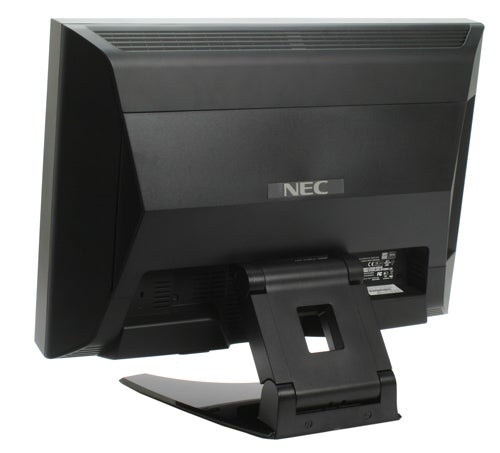 With the generous array of connection options, NEC is obviously expecting consumers to be hooking up game consoles to the LCD24WMGX3, and here it performs just as well. The screen supports 1:1 pixel mapping, so you can be assured that the image you’re looking at has not been stretched from the original source. So, if you want to play your Xbox 360 or PS3 at 1080p, you’ll get thin black bars at the top and bottom of the screen, but the image will be pixel perfect.


It’s a similarly impressive performance when it comes video, with the LCD24WMGX3 proving to be a solid option for anyone who wants to use their monitor for everything. Firing up the second (and even better) Watchman trailer in 1080p, this NEC showed once again that it can deal with dark detail commendably, while also keeping vibrant colours, well, vibrant. Motion is also kept in check very well, which will make both gamers and movie buffs happy.

Not so impressive is the audio quality from the screen. To be fair, the sound produced is better than most, but that’s still to say that it’s not great. On the plus side, audio can be piped through using any number of connections, from analogue phono and 3.5mm mini jack, to HDMI. As already mentioned though, there are many options to pass the audio through to external speakers, amps or headphone – and I’m guessing that most people will do just that.


Unlike NEC’s 30in masterpiece, the LCD24WMGX3 doesn’t sport an IPS panel, instead opting for AMVA technology. Of course this is still a proper 8-bit panel, with a full 16.7-million colour palette at its disposal, but IPS panels generally offer better image quality and wider viewing angles. That said, IPS panels also tend to have higher response rates, which is less desirable for gaming, so I can see why NEC went down the AMVA route for this screen.

The LCD24WMGX3 has a 6ms grey-to-grey response time, which may not be as low as recent TN screens, but is still pretty good for an MVA panel. NEC is also one of the few monitor manufacturers that’s honest enough to quote a full black-white-black response time as well, with the LCD24WMGX3 turning in a respectable time of 16ms. A brightness rating of 500cd/m2 is good to see, while the 1000:1 contrast ratio is also decent enough, considering that’s a native number. Contrast ratio does rise to 2000:1 with dynamic contrast enabled – like the LCD3090WQXi, this screen has an ambient light sensor and the backlight can be automatically adjusted according to the lighting in the room. This is very effective, and you can even tailor how aggressive or discrete you want the dynamism of the backlight to be. 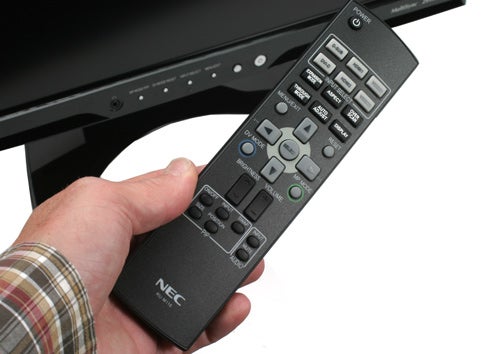 In the box you’ll find cables for D-SUB, DVI, HDMI, Power and audio, which is fairly generous. The only thing missing is a component video cable, but I’m guessing that most people will be hooking up either an early Xbox 360 or Nintendo Wii to the component inputs, which means that a standard cable would be of little use anyway. You also get an infrared remote control, which allows you to perform almost all adjustments without having to touch the buttons on the monitor itself. You can of course, also switch inputs and adjust the volume of the speakers, again making it attractive to anyone who’s using the screen for their PC/TV/DVD/Consoles etc.


The LCD24WMGX3 follows the NEC trend and carries a pretty hefty price tag – there was a time when £620 was cheap for a 24in monitor, but these days that’s about as expensive as it gets. This issue is compounded by the fact that TN panel 24in models can be had for well under £250, and many gamers, who are less concerned with absolute image quality, are likely to gravitate in that direction. That said, putting the slightly disappointing stand to one side, this is a very good 24in monitor that’s in a different league from most of the gaming/entertainment orientated competition. 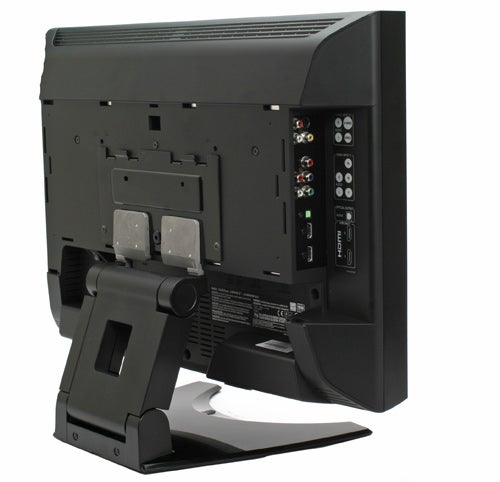 
NEC has, unsurprisingly, created a very good 24in monitor. What you’ve got here is a screen aimed at gamers, that has been built to the same exacting standards that NEC builds its professional image editing screens. It’s a shame that the LCD24WMGX3 doesn’t have the same stand that I’ve seen on previous NEC screens, but that’s one of the very few criticisms that I can level at this display. The big question is whether you’re willing to pay the substantial asking price, and that’s a decision that only you can make. If you can afford it and you want a truly excellent 24in display, then go right ahead, but others may well find the temptation to buy two 24in screens for the same price a bit too tempting.