While 22in monitors have been around for a while now, they’ve mainly been aimed at the general consumer and gamer. The 22in size and resolution combination is a good one – you get a large screen size, that’s first, widescreen and secondly, is appreciably bigger than a 20in wide display. The resolution of 1,680 x 1,050 is also high enough to work comfortably on, but without the cost of a 1,920 x 1,200 display. It’s essentially a widescreen 1,280 x 1,024. Of course, inevitably, things are moving on and Lenovo has announced a 1,920 x 1,200 22in display, which could be the perfect monitor for many people, giving a far smaller pixel pitch, which will increase sharpness. However, in the mean time the NEC MultiSync LCD225WXM represents the mainstream for 22in displays, with a pixel pitch of 0.282mm. 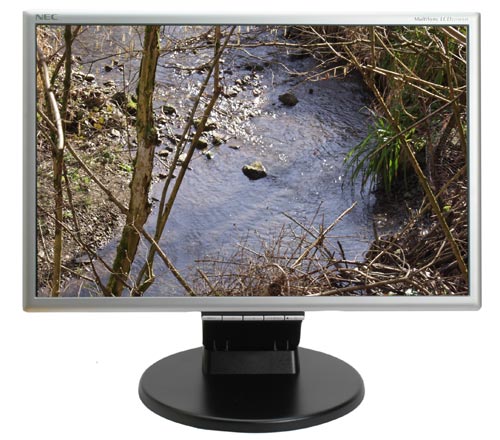 Indeed, merely by appearing in NEC’s ‘commercial display’ line-up, the 22in size can be seen to have now become completely mainstream. As with all 22in displays, the panel used is a basic TN, which contrasts with NEC’s 21in MultiSync LCD2170NX, which despite being smaller retails for more, featuring as it does, a PVA panel.


One of the advantages of the TN panel is that it offers lower response times, and indeed a 5ms response time from black to white is given here. The brightness is listed at an average 300cd/m2, though the contrast ratio is a claimed 1,000:1. 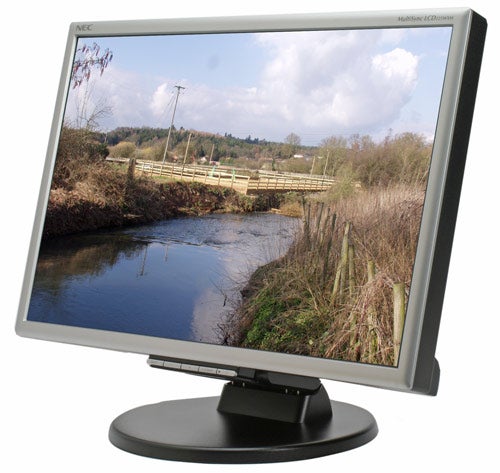 The look of the monitor is unlikely to set any pulses racing, unless conservative black and dull silver/grey is your idea of a wacky colour scheme. It’s designed to be inoffensive for the average office and on that score it succeeds. NEC’s tend to have thin bezels and this one is the same with a five button arrangement below the screen in the middle.


Cleverly, NEC has placed speakers in the base of the monitor, so that you don’t need to clutter up your desk space with external desktop speakers, though should you wish to do so, a pass through connector is present on the side. Inevitably, the performance of the 1 Watt speakers is merely adequate, so while you won’t want to listen to music all day over them, it’s good enough for the bells and whistles of PowerPoint presentations or the inanities of YouTube videos, and other such office essentials.

The next point of interest is the stand. The monitor sits on a circular base that enables you to swivel it round easily, making it easy to collaborate. This is pretty much vital on a TN panel based display as the viewing angles are generally poor, and that’s the case with this screen. It lists 160 degrees as the maximum, but the specs also admit that the contrast ratio at this acute angle drops to a mere 10:1 – and 5:1 vertically – and it is indeed pretty much invisible at these angles.


As well as the swivelling base there’s a degree of height adjustment but only 50mm of it, though as you can tilt back 5 degrees and forward 20, you should be able to get an optimal and ergonomic viewing position. Round the back of the stand you’ll find a hook for the cable management, so you can keep things tidy round the back. 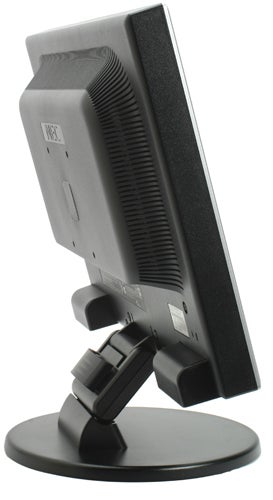 The OSD controls are basic and not particularly attractive looking. Press the select button and you can scroll through adjustments for brightness, contrast, and red, green, and blue, levels. You can choose between colour temperatures, 9,300k, 7,500k, sRGB, User, and Native, though I could find little benefit adjusting from the native. Press the select button twice and you get to the volume controls for the speakers, and pressing Reset will mute them. Alternatively you can use NEC’s Naviset utility, which is available online.


Other features include Vesa mounting holes and a Kensington lock, though there’s no USB hub as you might hope for an office bound display. In terms of connectivity you get a DVI connector, with no mention of HDCP compatibility, and a D-Sub.


In terms of image quality the NEC was underwhelming compared to my previous experiences with the 24 and 26in displays. Of course, this is in a very different category and far cheaper so it’s to be expected. At maximum settings the display is quite bright so you’ll find you have to turn it down a notch for general office use. It’s still not as vivid as the best NEC displays. However. the key factor though for a monitor of this type is how it deals with text and in this respect the LCD225WXM does a decent job, though again it’s not the tour-de-force that the more expensive NEC displays put in.

Pleasingly, the white balance was better than my reference Dell 2407, though to be frank, that’s not saying much. However, whether in Excel graphs or in photos, I felt that colours were rather muted. They don’t pop off the screen as they do with the best displays. In photos I felt I wasn’t quite getting as much detail in the darker shadow areas as I know is actually there, having seen the same images of better displays such as NEC’s own 24in and 26in units.

This was borne out in the DisplayMate tests, which revealed very average results in the grey scale tests, with it being very difficult to differentiate all the different levels right from grey to black. In the colour scaling tests, we found that the fading wasn’t smooth and even, and generally there was a reddish tinge to colours. However, the absence of serious banding was a plus.

If you did want to give your display a treat and take it out for some gaming between spreadsheets you’ll be satisfied if not blown away. Motion handling was smooth and fluid and gaming success in Counter-Strike was limited only by my severe lack of practice. Again the colours were notably muted, and shadows detail only adequate. If gaming’s your main bag there are better options out there, such as HP’s glossy coated https://www.trustedreviews.com/displays/review/2007/08/08/HP-w2207-22in-LCD-Monitor/p1 w2207} 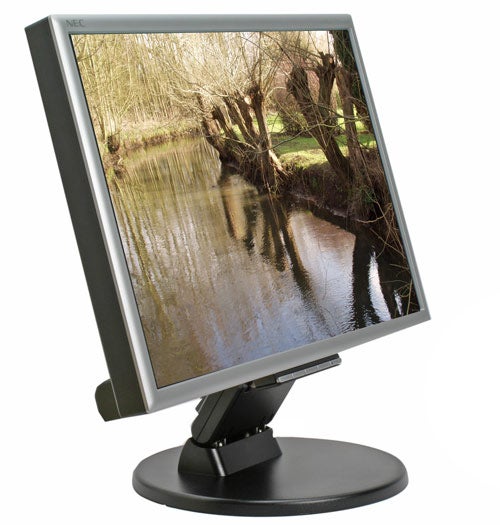 Overall, this is an inoffensive looking, if fairly basic display. It will serve perfectly well in an undemanding office environment if all you really want to do is give your Excel spreadsheets some extra room to the sides but it’s not really good enough, or cheap enough, to earn any more than an average score.


The NEC MultiSync LCD 225WXM keeps things simple with a conservative look, some basic height adjustment and built-in speakers. But image quality is merely good as opposed to excellent, which considering the price means that it can really be recommend over the rest of the 22in competition.