A few weeks back I took a close look at the Asus PW191 – a widescreen LCD with a reflective glossy coating that you’ll either love or hate. The trend to use this type of coating to enhance colour contrast and saturation seems to be gaining popularity, and another unit to join this growing niche is the 20.1in MultiSync 20WGX2 from NEC Display Solutions. 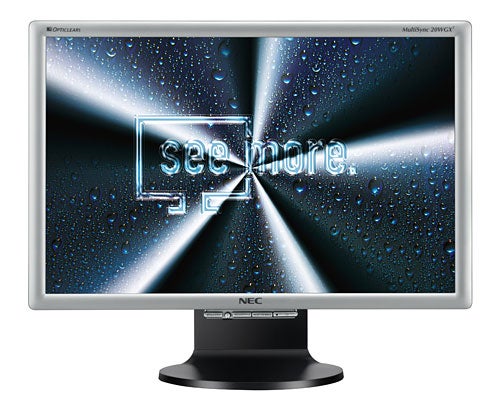 Although we saw NEC use this glossy coating (termed Opticlear) over a year ago with the LCD1970GX, the 20WGX2 is (was) the first widescreen model from the company, and the specs look good. It’s a 20.1in AS-IPS widescreen panel (manufactured by LG-Philips I believe) with a 1,680 x 1,050 native resolution and a claimed 6ms (grey-to-grey) response time. If you’re looking to buy a widescreen desktop LCD, this sort of resolution and panel size is probably the best entry point.


The 20WGX2 joins NEC’s 70GX2 and 90GX2 monitors, described as multimedia displays with the “G” in the model number standing for “Gaming”, “Graphics”, and “Glossy”. Indeed the latter term is certainly correct. It is very reflective and as a result working in a well lit environment isn’t ideal. In fact, reflections and glare from my office lighting is very noticeable. However, in a gaming or movie watching environment where the lighting is typically lowered, the display’s picture quality is very punchy. 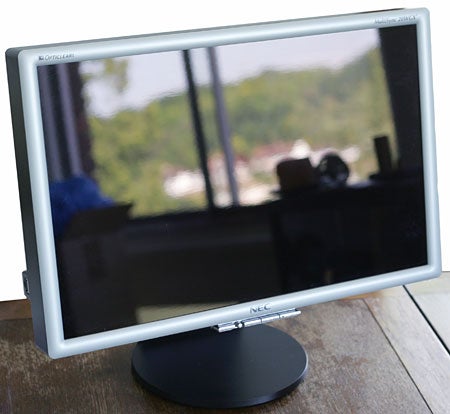 The OptiClear coating makes blacks look very black whereas colours appear richly saturated. The high 470 cd/m2 brightness and 700:1 contrast ratio help enhance the vibrancy too. The contrast can even reach levels of 1600:1 when NECs Advanced DVM (Dynamic Visual Mode) is utilised. This is a software-based feature and does not use an external light sensor as one might expect. Instead, the 20WGX2 continuously analyses the picture information and optimises the colour display accordingly without you having to select the modes manually. NEC states that the contrast can be improved in the dark areas only, the light areas only, or in both. Various DV modes (Standard, Text, Movie, Gaming, and Photo can also be manually selected by pressing the Reset/DV mode button.


In practice, it seems to work quite well. I’ve seen other monitors that apply this sort of content dependant brightness/contrast tailoring, but in far too many cases the effect just seems to be too exaggerated and can ultimately influence the detail and colour performance of the picture. With the 20WGX2, the changes are more subtle – unless you manually select the Photo DV mode (see later) – but remain effective without turning whites into pinks or blacks into greys.

There are other clues of the level to which NEC has tweaked the 20WGX2 to bring out the best of the panel. First, as I mentioned earlier, this monitor uses an IPS (In Plane Switching) panel. IPS panels are known to have slower response times and are therefore not ideal for displaying moving images. Furthermore, the liquid crystal cells have smaller aperture ratios which mean less light is transmitted from the LCD’s backlight. To counteract these two factors, NEC uses its Overdrive (Rapid Response) technology to “rev up” the liquid crystals for faster response times, along with a bright and power hungry backlight – no wonder electrical consumption hits 71W. By design, IPS panels also have excellent viewing angles and this is certainly the case here – the picture can be viewed at very shallow angles from the side and the top or bottom with virtually no colour shift and just a slight drop in illumination. 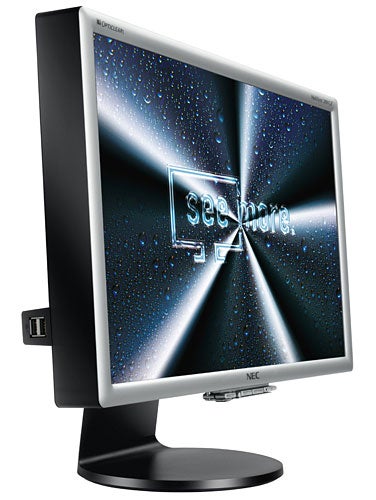 While I can certainly say the 20WGX2 is a high contrast, bright and vibrant LCD, response time is more difficult to gauge from one monitor to the next. In the real world, gaming and movie sequences looked fab and motion smearing, after glow, or whatever you want to call it, was difficult to detect.


As for general image quality, the high-contrast and gloss-enhanced colours are all well and good for gamers and movie viewers but what’s it like for image editing? Well, rather good in my opinion. Although not as fine-tuned as monitors specifically designed for colour critical applications, the 20WGX2 performed admirably in its Standard mode. Colour performance was far better than what I saw in the Asus PW191 and skin tones looked realistic with little sign of pink and/or green blemishes. Oddly, I found image editing in the Photo DV mode a futile experience. For some reason this mode really compresses lowlights resulting in a heavy loss of shadow detail in my test images. When editing your pics, my advice is to leave the 20WGX2 in the standard or sRGB mode.

Testing with DisplayMate, primary colours were shown to be extremely vivid and colour scales were smoothly stepped in the mid-range. A degree of lowlight and highlight compression did exist and removing this from both ends simultaneously was nigh on impossible. Greyscale ramps were also smoothly stepped, but an ever so slight green tint did mar some greys. However, this can be muted with a tweak of the colour controls.


Overall, the 20WGX2 performed very well and gamers should generally be happy with the fast response time and lively picture. And despite its gaming target market, colour accuracy for image editing was adequate. But can you live with the glossy, reflective coating?

As for the design of the monitor, it uses a similarly curvy chassis as the LCD1970GX. It has relatively narrow silver bezel, a stand with integrated cable routing, and a 340 degree swivelling base. It also comes with a built-in power supply with its own switch, a DVI-D (non HDCP-compliant by the way) and a D-SUB port, plus a handy four port USB 2.0 hub. On the downside, there’s no pivot function, speakers, or height adjustment.

Like the LCD1970GX the OSD layout and four button controls with four-way directional stick have been carried through to the 20WGX2. The little stick makes menu navigation a breeze. Menu options include six colour presets consisting of a non-adjustable native one, an sRGB mode, plus four defined colour temperatures where you can fine tune the RGB levels independently. NEC has also included the Sharpness and Expansion Mode settings, the latter of which lets you expand resolutions of 1,280 x 1,024 or lower to either fill the screen or to maintain the aspect ratio. To top it all off you can even dim the blue on/off light from within the OSD – a nice touch when operating in a darkened room.

At the time of writing, the MultiSync 20WGX2 will set you back several quid over £400. That’s around £80 more than the widescreen ViewSonic VX2025wm, I reviewed , but is it money well spent? Personally, if I was really into my gaming I could justify the extra £80 for the USB hub, the dazzling glossy screen, the wide viewing angles and the fine showing in the image quality stakes. However, if you’re on a tight budget and hate reflections the ViewSonic may well be a better alternative.


The NEC MultiSync 20WGX2 is more expensive than similarly specced monitors, but if you don’t mind the heavily reflective glossy screen, and are hell-bent on getting the most punch from your games, then this makes an ideal upgrade from a 17in LCD or even a CRT monitor. The widescreen aspect ratio makes it great for movies and the 1,680 x 1,050 native resolution across a 20.1in diagonal represents a key step in desktop area. Add height adjustment and pivot for the same price and it would have received our highest accolade.