The Nebula Capsule has a number of limitations as a projector, but if you're looking for Android support and portability then it's definitely worth considering

What is the Nebula Capsule?

The Nebula Capsule is a portable DLP projector with an Android operating system. This crowd-funded beamer is actually made by Anker, and as portable projectors go, it’s one of the most feature-packed I’ve seen.

These days, a portable projector doesn’t just produce an image; the Nebula Capsule also has a built-in JBL speaker, Wi-Fi, Bluetooth, and AirPlay. Thanks to its Android OS, it even offers access to a number of video streaming services.

All those features don’t come cheap: the Nebula Capsule will currently set you back £349.99. However, if it can deliver a decent image then it might be worth the investment.

The Nebula Capsule uses a cylindrical design that provides the projector with its name. Build quality is excellent, with curved edges that give the appearance of a used artillery shell. The Capsule weighs 420g, which makes it suitably portable, but it also feels solid enough to ensure it won’t fall apart as you move it from place-to-place. 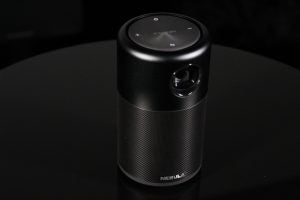 The Capsule is constructed from metal, has a matte-black finish, and there’s an attachment on the bottom for mounting the projector on a tripod. The bottom two-thirds of the chassis is effectively a grille, where the 360-degree speaker is housed. This has 5W of built-in amplification, which not only allows you to hear the audio from videos, but also use the projector as a Bluetooth speaker. 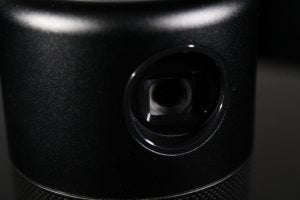 The top third of the chassis is where you’ll find the projector lens, with fan vents for cooling the bulb at the rear. There’s a fair bit of fan noise, but this is to be expected with a bulb-based projector. At the side of the lens is a small wheel for focusing the image, and if you want to change its size then you simply move the projector closer or further away from the wall or screen. The Capsule will also automatically adjust for any distortions caused by keystoning. 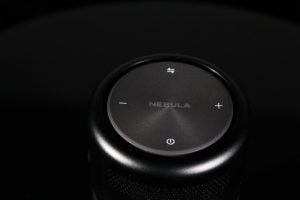 At the top of the Capsule are some basic controls: power, volume up/down, and a button for switching between projector and Bluetooth speaker modes. In the box you’ll find the projector itself, a carry case, an adapter and cable for connecting other devices and recharging the battery, and a remote control. 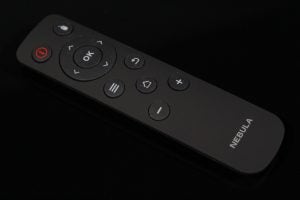 The latter is fairly basic with navigation controls, a mouse mode, power, volume up/down, home, menus, and back. This controller is reasonably effective, but you need to ensure it’s pointing directly at the projector or it has a habit of not registering a button press. 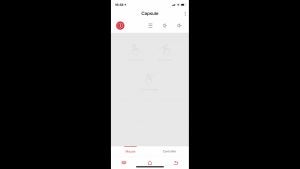 There’s also the very effective Capsule Control remote app available for iOS and Android, which mirrors the functionality of the included controller and adds a useful trackpad. The app also controls Netflix, so I definitely recommend installing it on your smart device.

The Nebula Capsule has a host of features but the headline-grabber is undoubtedly the inclusion of an Android operating system. The projector is actually an Android 7.1 device but it doesn’t include the Google Play store. Instead, the apps are downloaded from Aptoide – a marketplace that runs on the Android OS. 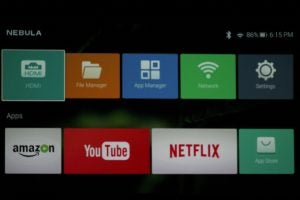 As a result, the Capsule has a limited number of apps. However, from a video streaming perspective, the four most important are present: Amazon, Netflix, YouTube and BBC iPlayer. There’s also Plex and Kodi, which some users will undoubtedly find useful, and a built-in a file manager that allows the Android-savvy to side-load your favourite apps.

The Capsule does include Chromecast connectivity, but its Android operating system means it can only send videos, and not receive them. However, you can stream video from Apple smartphones and tablets thanks to the Capsule’s support of AirPlay, and there’s also the option to Miracast for Microsoft devices. 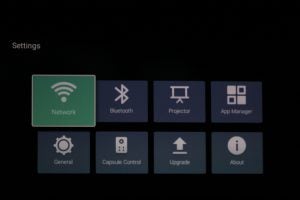 While the smart features on the Capsule are impressive, the specifications for the projector itself are decidedly disappointing. The DLP chipset is 16:9, but limited to a standard definition resolution of 854 x 480 pixels.

Nebula claims a lamp life of 30,000 hours, which is very optimistic, but despite all the fan noise the bulb isn’t that bright, managing only 100 lumens. The Capsule uses a long throw lens, which can produce a 40-inch screen size from 1 metre and 100 inches from 3.08 metres. 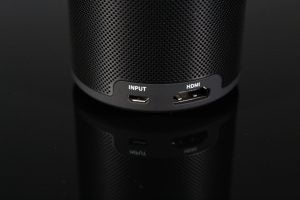 At the bottom of the Capsule are two physical connections: an HDMI input and a micro-USB input for charging the battery. Although that might not seem like a lot, it’s certainly sufficient for a portable projector. In addition, the Capsule includes plenty of wireless options with Wi-Fi and Bluetooth capabilities. The latter also allows the Capsule to double as a wireless speaker.

The Nebula Capsule certainly works, and after only a few minutes I had it projecting an image onto a white wall. However, the limitations of this projector were immediately obvious: the resolution is way below what we’re used to in this era of 4K, and the brightness is limited, too.

The lower resolution is to be expected in a pico projector, and the Capsule is capable of producing an image up to 100 inches in size, which is pretty good. However, at that size the resolution limitations are all the more obvious. I’d suggest not going too big, and sitting further back. That will mitigate the resolution issues, and keep the images watchable. 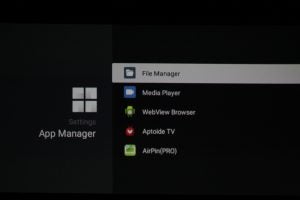 You’ll also need to consider the brightness of this projector, though, because 100 lumens is fairly dim and it will struggle in a brightly lit room. So when setting up, consider factors such as the surface you’re going to project, and how much ambient light is in the room.

To get the best results I set up the Capsule in my home cinema, which is completely black and has a dedicated projector screen. Under those conditions I was able to get a decent image, but I appreciate that the entire idea of a portable projector is to use it in all environments. 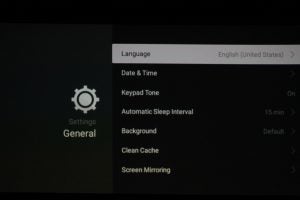 When watching Netflix, Amazon, and YouTube, the picture was acceptable with reasonably accurate colours. However, blacks were poor and the shadow detail was non-existent, which is to be expected with a DLP projector.

If I put on a Blu-ray, the image was obviously being downscaled – and as such it lost some of its detail. Nevertheless, it remained perfectly watchable, and the motion was reasonably good too. The Capsule could never be used in a genuine home cinema, but it’s certainly adequate as a portable projector. 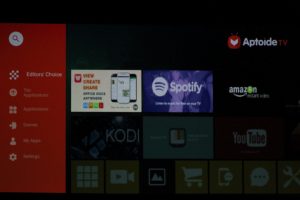 Audio quality from the Capsule is surprisingly decent, and is certainly sufficient for use whilst on the move. The built-in speaker sounds far bigger than it is, and can go quite loud without signs of distortion. The bass is limited and the high-end is a bit toppy, but the mid-range is fairly good. The biggest problem is the fan noise, so it’s just as well the speaker can go loud.

The fact that you can use the Capsule as a Bluetooth speaker is a clever idea, and while it doesn’t sound as good as a dedicated wireless speaker, it’s useful to have the option. If you want to improve the sound from the Capsule, you can connect it to Bluetooth headphones or speakers.

Why buy the Nebula Capsule?

It’s fair to say that the Nebula Capsule is a decidedly niche product, aimed at consumers with very specific needs. Chances are that most of us don’t need to carry a projector around wherever we go. However, if you do need a portable projector that’s robust, easy to set up, sounds decent, and includes numerous smart features, then the Capsule is just the ticket.

The inclusion of an Android operating system, built-in apps, Wi-Fi, Bluetooth, and AirPlay certainly set the Capsule apart from its pico projector competition. The excellent remote app is also a handy feature, and the ability to turn the projector into a Bluetooth speaker is inspired. Unfortunately, the Capsule is let down by a low-resolution image and limited brightness.

If you need a portable projector, then the Nebula Capsule is definitely worth considering. However, if you’re actually looking for a projector to deliver some big-screen action then there are vastly superior options available for only a few hundred pounds more.

The Nebula Capsule has a number of limitations as a projector, not least in terms of its resolution and brightness. However, if you’re looking for a feature-packed portable Android projector then it’s definitely worth considering.