What is the Neato Botvac Connected?

Robot vacuum cleaners are cool, but not as cool as they used to be. After all, we now live in a world where almost everything has network connectivity and an accompanying app, so it’s a lot harder to impress.

That’s where the Neato Botvac Connected comes in. The company has done pretty much everything possible to make it one of the most advanced robot vacuum cleaners on the market.

It doesn’t just use laser mapping to get around; it connects to your Wi-Fi and talks to you through a mobile app. You can even use your voice to activate it, thanks to Amazon Echo integration.

It’s super-cool – but so is the Dyson 360 Eye, which is also smart and networked for remote control. It’s a tough fight, but the Neato Botvac Connected holds its own thanks to some clever tricks and a lower asking price. 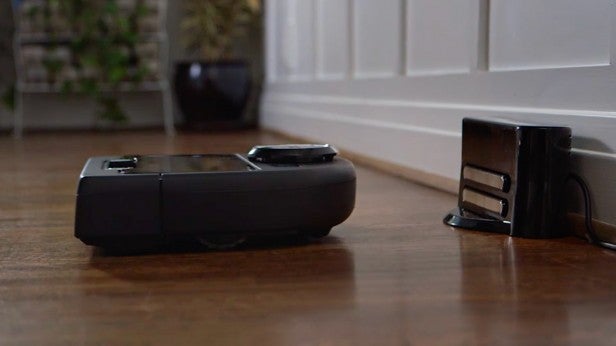 One look at the Neato Botvac Connected and it’s clear it means business. The all-black colour scheme, with shiny metallic accents, immediately marks out this unit as a serious contender. I’ve taken to calling it the Bat Vac, because it wouldn’t look out of place zipping about in Bruce Wayne’s kitchen.

Neato has gone for a wide and flat design, similar to most robot vacuums out there but in contrast to the Dyson’s slim and tall body. Measuring 32 x 34 x 10cm, the Neato has a larger footprint than the Dyson, but it will more easily slide under your sofa.

As with the best vacuum cleaners, the Botvac Connected cleans with a mix of suction and brush power. There are two flavours of brush bar: a spiral rubbery blade and a ‘combo brush’ with tough bristles for tackling pet hair. The bar is aided by a little spinning brush on one edge, designed to handle border cleaning and generally flick debris into the path of the big brush. 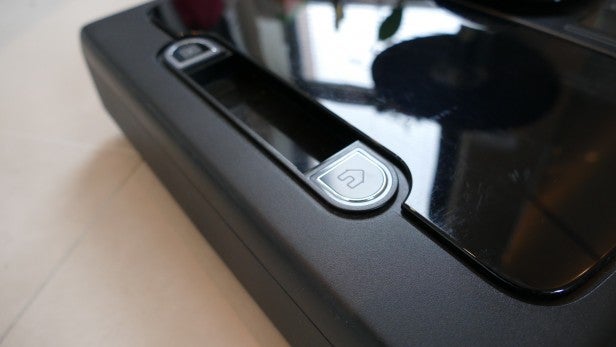 At the top of the device is a little screen for basic interactions. It has touch controls – very responsive – for tinkering with settings and to schedule cleaning. There are also two large physical buttons for rudimentary control: spot cleaning or full home cleaning.

The top is also where you’ll find the the 0.7-litre dust bin, which lifts out easily. A little too easily, in fact – the gap into which you slot your hand to remove the dust bin is the same alcove you use to pick up the vacuum. It’s all too easy to believe you’re moving the device only to end up yanking out the bin.

As for accessories, they include a chunky charging dock, a spare filter and magnetic boundary-marking strips used for putting down no-go zones. 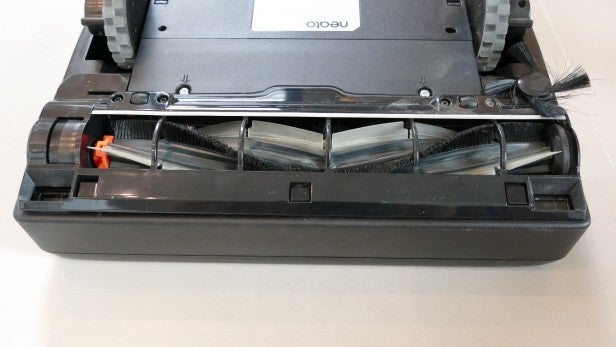 You’ll struggle to find a robot vac with a greater number of features. The most significant one, as its name suggests, is online connectivity. You can hook up the Botvac to your Wi-Fi, and the iOS or Android app lets you control it wherever you are as long as you’re online.

Alongside scheduling cleaning and tweaking the settings, the app lets you steer the robot as if it were a toy car. It’s far too slow to chase your pets around the house like a Sphero BB-8, but it’s good for a bit of manual spot cleaning. This is something you don’t get from Dyson.

Neato scores another point over Dyson with its latest update, which offers Amazon Echo support. That’s right, voice-activated robot vacuuming: “Alexa, ask Neato to start cleaning.” Is it necessary? No, and it’s nothing you can’t do with the app, but it’s pretty cool nevertheless.

Less shouty features include the use of laser for mapping and navigation, so it doesn’t blindly bump around your home. There are also edge sensors to stop the Neato from flinging itself down your stairs, and a choice of power settings.

Eco Mode makes the Botvac Connected run with less power and noise, giving you an estimated running time of 120 minutes. Turbo Mode means 90 minutes of cleaning on full power. Whenever it runs out of power, the Botvac will automatically return to the dock to recharge, and then resume cleaning where it left off. 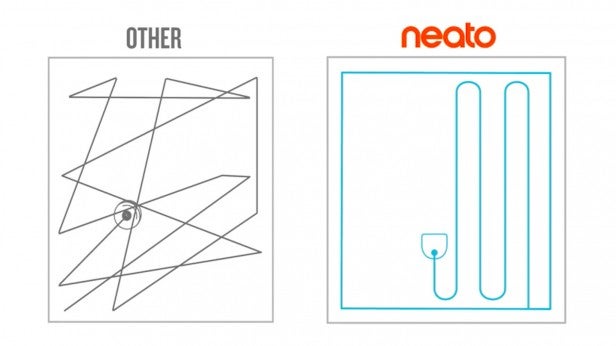 Performance isn’t without hiccups, but the good far outweighs the bad.

The Botvac’s navigation is intelligent and systematic. It takes a moment to take a look around and then proceeds to sweep the room in rows and columns, as well as running along the edges. That’s similar to the approach taken by the more expensive Dyson 360 Eye, and it’s a lot better than bouncing around pinball-style in the way of the Roomba robot cleaners.

I also like the D shape of the Botvac, which helps it get right into the corners. Combine that with the low profile – good for getting under sofas, radiators, kitchen cupboards – and this is a robot that will have no problem getting the vast majority of your room clean.

Cleaning power is impressive too, for the most part. It’s a formidable opponent of debris on hard floors, sweeping up grains of salt and ground coffee in one pass. Homes with carpets are best served by Turbo Mode, especially if you have pets. 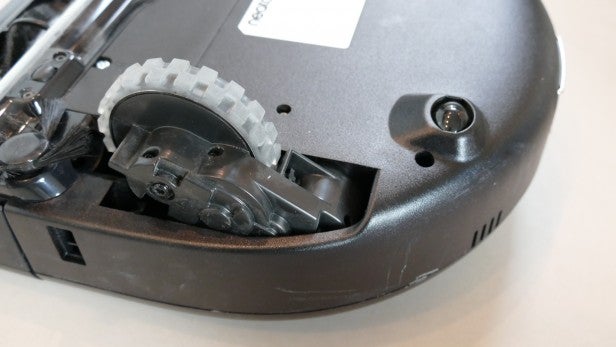 The Neato Botvac Connected doesn’t love thick carpets, and this is where the Dyson scores a few counter-points. The Dyson has power on its side, and even on my deep-pile rug it never appeared to struggle. It also has tank treads, allowing it to easily climb onto the rug.

In contrast, the Neato occasionally bumped into the edges of the rug, thinking it was a wall, and went to clean elsewhere. If you’re looking for an all-terrain robot vacuum, this isn’t it.

The Connected element works very well – although it’s arguable how useful it is. The steering function is great for inconveniencing my pet rabbit, but if I drop a scoop of porridge oats on the floor then I’m more likely to reach for my handheld cordless vacuum than activate the Botvac.

The remote activation feature is more useful, however. Guests coming over tonight, but you’re stuck at work? No problem, the Neato can start cleaning in your absence. The app is intuitive, and far more stable than Dyson’s effort, which has occasional connection issues. 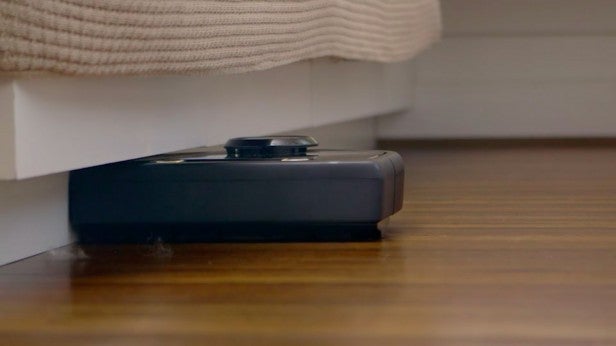 Should I buy the Neato Botvac Connected?

It isn’t flawless, but Neato’s Botvac is one of the best robot vacuum cleaners I’ve seen. It has a great list of features, and it’s good at getting the job done. Its nearest rival, the Dyson 360 Eye, is more nimble and powerful, especially on carpets. But it’s also more expensive. If you live with mostly hard floors, the Neato is more than good enough. Check out our guide to the best robot vacuum cleaners for more.

One of the best robot vacuums cleaners you can buy.