The Apple effect is reaching far and wide. The iPhone has had a huge impact on what people expect from the interfaces on their mobile devices. Now even sat-navs are following the lead, in particular Navman’s new S100, which sports the Spirit interface it has developed in tandem with Mio.


For those familiar with previous versions of SmartST, Spirit (aka SmartST 2009) will be quite a shock. It’s completely different. The menu docks behind one side of the screen, with a small edge peeking out. Touch this and the menu pops out ready for use. In order to reach portions hidden below the bottom of the screen, you touch the edge again and motion upwards to reveal the remainder, in a similar way to an iPod touch or iPhone. This does take some getting used to, however, and we regularly managed to re-dock the menu rather than scroll it upwards. 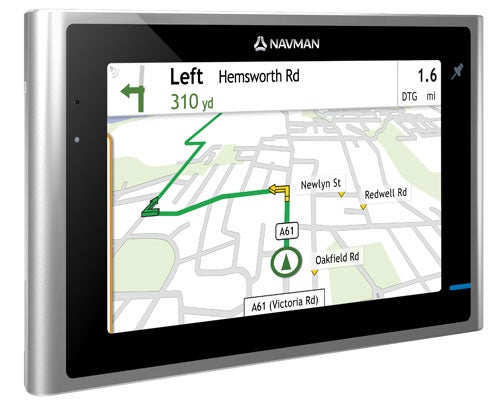 A touch of an innocuous blue line in the bottom right corner of the device calls up an iconographic menu which provides access to the main sat-nav features. This also scrolls up in the same way as other menus. But this isn’t obvious, so you might initially miss the bottom two icons, which list nearby parking facilities and call up the media playing app. There is also an icon to find the nearest petrol station, but no other POI categories are given such direct access, unlike TomTom’s earlier devices which include cash machine and food options, among others. There is also no FM transmitter or audio mini-jack, making the S100’s MP3 playing abilities mostly pointless. The Navman S200 will include this, but hasn’t been released in the UK yet.


The S100 itself is probably the sleekest sat-nav design yet, again clearly with more than a small nod towards Apple. The body is made from brushed aluminium, and is thinner than you would expect for a device with a 4.3in widescreen. However, although the S100 itself is a design tour-de-force, Navman hasn’t focused its renewed flair on other aspects of its functionality. The car adapter power connection still uses USB, and must be attached prior to slipping the S100 into its screen mount. The cradle feels flimsy, and it’s fairly easy to miss the notches either side which secure the device in place. It’s a shame Navman didn’t round off the S100 with the kind of cradle found in top-end Garmin and now TomTom devices, where you can simply slip the sat-nav on its mount and head off.

Of course, none of this affects the core functionality. The S100 does have a few unique features other than its design and interface, but not that many. One of the most useful is the ability to search by keyword. Normally, you would need to drill down through an address, starting with the city or town, then street. But the S100’s new keyword approach lets you enter any part of the address you can remember. So if you’re not sure which town an address is in, you can still find it quite quickly. In the past, this could be a process of trial and error, putting in a few possible towns until the right one was found.


The S100 also includes Navman’s 3D Landmark system, and as the maps are TeleAtlas 2008.10 rather than 2007.10, this is more complete than the one included with the S30 3D. So there is now a model for Wembley Stadium, for example. But we still remain unconvinced by this feature. Large landmarks loom in your peripheral vision as you drive, but they only appear on the sat-nav screen when you are virtually on the doorstep. While 3D models do have exciting potential to make navigation more visual and intuitive, they have a long way to go before this potential is realised. 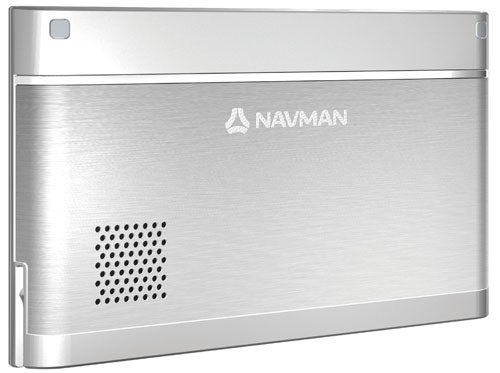 More useful is the lane guidance system, which works in a similar fashion to the facilities recently added to TomTom, Navigon and Garmin devices. Navman claims its guidance graphics are the closest to the appearance of the real junction, with road signs tailored to look just like what you should be seeing through your windscreen.


Other than this, the features are fairly standard. There are driving and walking route modes, but no lorry, offroad or bicycle options. A new Economical calculation mode works out the route with the least turnings and junctions, so you can keep driving speed constant and thus use less petrol. You can also use the pin in the top right corner of the device to capture your own POIs and add them to the database.

The Local Search system available with other Navmans can also be used with the S100. This provides a European-wide database, supplied by Infobel, which includes many more POIs than are stored on the unit itself. We found lots of local facilities, such as schools and pubs, which would never be included in any sat-nav POI selection. However, the searching can only be performed via the NavDesk PC software, and the results downloaded to the device over USB. Unlike Navman’s S90, S70 and S50, the S100 inexplicably has no Bluetooth built in. There is a Navman S150 with Bluetooth available in Australia, but like the S200 this hasn’t been released in the UK, and Navman tells us this model won’t be coming to this region.

For the money, you might also expect the S100 to include RDS-TMC or European maps. The Navman S90i is now a little cheaper, and has TMC built in, and so is the TomTom GO 530 Traffic. But this is in fact a UK maps only device, although full European maps come on the supplied disc and can be unlocked by purchasing a code, saving a large download. You can add traffic updates via a TMC accessory kit (likely to cost around £50), and there is a configuration icon ready in the menu for this once installed. Yet again, a S300T model not yet available in the UK will have a traffic receiver as standard. The S100 also includes a trial of safety camera information. Like other Navmans, this lasts a year and then you pay £34.95 a year or £69.90 for three years, which is a little more than TomTom charges.


The Navman S100 is a bold and innovative sat-nav in a number of areas. But it also still misses out on neat features now found on more than one competitor’s products, in particular the ‘active dock’, which integrates power and traffic connections into the screen mount itself. The Spirit interface looks very nice and follows the latest Apple-inspired trends. However, we found it quite finicky, and in some areas more difficult to use than Navman’s previous, less trendy front end. When you’re heading off in your car, the last thing you really need is to deal with something fiddly, and unfortunately this first outing for Spirit is just that. So we recommend looking elsewhere until Navman has made Spirit more reliable, and released the more feature-rich devices already available in other regions.