In the world of the indie game, few games can claim to have been as influential on other titles over the last couple of years than Frogmind’s Badland, at least on a visual standpoint. Though it was by no means the first game to bring a silhouette-like skin to proceedings, its success has triggered a surge in said art style, with Naught Reawakening the latest to fly this particular black flag.

In terms of gameplay, what’s on offer here has less in common with Badland and more akin to recent TrustedReviews favourite And Yet It Moves. Just like DeNA’s paper pulped platformer, Naught Reawakening is all about rotation, turning the world around to get from A to B without landing yourself in trouble.

Taking charge of the game’s lead Naught, your job is to use buttons in the bottom left corner of the screen to tip the world left or right, with gravity taking care of Naught’s movement in response. The only other tool at your disposal is a jump button that gives Naught a millisecond or two of air time, but otherwise success comes down to manipulating the world around him to guide him through his topsy turvy world without hitch. 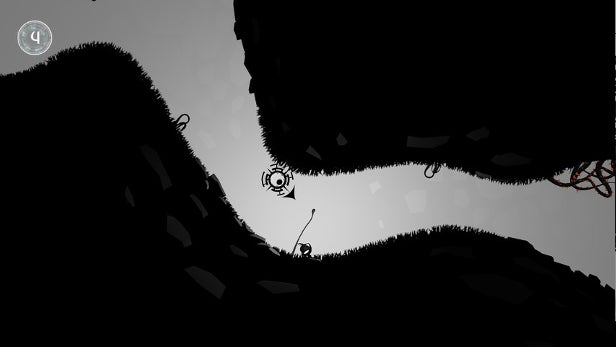 As you might expect, this is easier said than done. Your main enemy is a series of orange blossomed weed like structures that act much like spikes would in a typical platformer, taking your life away on contact and sending you back to the last save point. As the game progresses their form gets increasingly complex, but their mere existence makes this a game one of navigation, with your primary target – bright blue buds that bloom into flowers when you pass by and also add a life to your tally – often sat in the direct vicinity of the very things you’re meant to be avoiding.

The 360 degree nature of the game’s short and sharp stages means making your way through Naught Reawakening is much like wrestling with a series of tight and tense mazes. Just one slip up can land you in peril and, as you might expect, the longer you play, the more chance of there is of this happening: coming out on top in Naught Reawakening is a matter of dicing with death from beginning to end without succumbing to its delights. 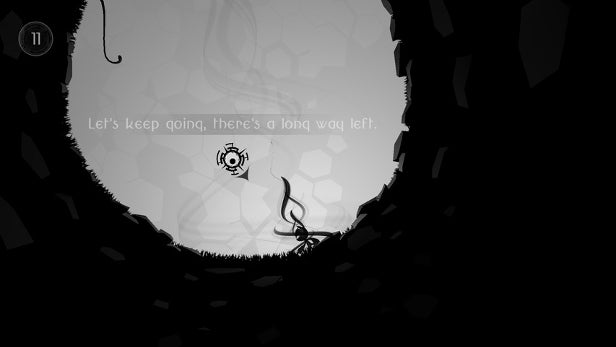 Secret parts of the level hidden by rocks that can be pushed out of the way add a portion of variety, while picking up gems that are, as you might expected, located within inches of death also keep the tension level high as you progress.

Though the levels are short, however, and new elements – including boss-like battles – are brought in to mix things up, there is a question of just how entertaining Naught Awakening can be when played in long bursts. The game essentially has one trick it uses to play from start to finish – that the world Naught lives in can be twisted and turned in any direction – which is demonstrated with much success within the first batch of levels. After that, however, Naught Rewakening’s technique seems to be just to ramp up the difficulty level, which doesn’t necessarily lead to the most inspiring sections of play. 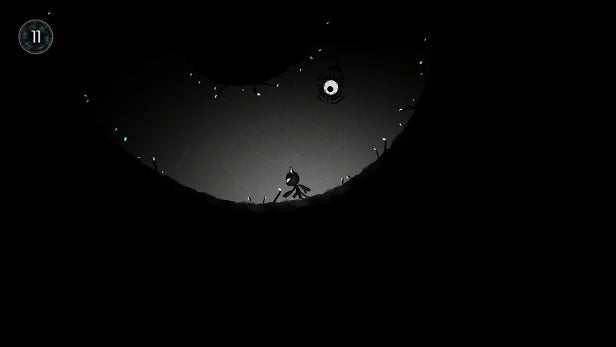 It seems a little churlish to criticise a platformer for following the well-established model of setting out its core principles and then challenging players to master them as the stages get trickier and trickier, but there’s a genuine question of whether the concept behind Naught Reawakening is strong enough to keep players enthralled from beginning to end, especially when there are other games already on the market – such as And Yet It Moves – that arguably take the same idea and pull it off with a touch more panache.

That said, if you’re a fan of what the likes of And Yet It Moves has to offer, Naught Awakening serves as an adequate follow up, delivering yet more gravity-based platforming action that, though not quite the classic it promises to be, nonetheless has the charm and the competence to draw a sufficient number of people into its dark and quite literally twisted world.

Verdict
Picking up the baton last held by And Yet It Moves, Naught Reawakening’s world can be tipped in any which direction in order to move the game’s lead Naught around its environment, but play soon becomes a touch sterile and predictable, despite the brilliantly blackened environment that it all takes place in.