The Naim UnitiQute is an all-in-one audio player designed to handle digital music formats from a wide range of sources. Coming from Naim, it’s an unsurprisingly high-end affair with a hefty price tag to match, but what that gets you is a luxurious, audiophile-standard unit with internal electronics that’ll squeeze every last drop of quality from your beloved tunes.

The UnitiQute’s versatility knows no bounds. It can play digital music files from USB devices, UPnP servers via Wi-Fi, iPods and MP3 players, internet radio and devices connected to its variety of analogue and digital inputs. If you’re a music enthusiast with music stored in a bunch of disparate places, the UnitiQute brings them all together in one compact box. The UnitiQute is derived from the company’s first all-in-one player NaimUniti, which additionally features CD player, and the SuperUniti.

Aside from its musical talents, UnitiQute’s design is an attraction in itself. It’s remarkably compact, about half the width of your average Blu-ray player (207mm), and is built like a tank. The outer casing is fashioned from black powder coated die-cast metal, offering a robustness that you simply wouldn’t get from a budget player (the 5.6kg weight says it all). It’s not a particularly dazzling design, but there’s an understated seriousness about it that really appeals.

On the front are a 3.5mm analogue input, a headphone jack and a USB port, which allows you to connect USB memory sticks and play digital media. It also connects digitally to an iPod and supports control and charging. The illuminated Naim logo on the front is touch sensitive, muting the sound when pressed once or changing the volume when held down. 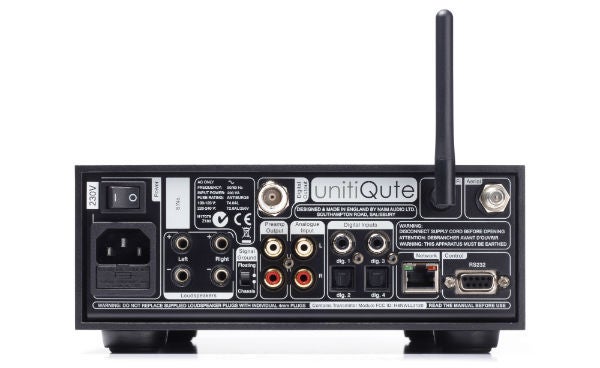 The rear panel tells a much more complicated story. It’s teeming with sockets, including analogue stereo input, four digital audio inputs (two optical and two coaxial), stereo pre-amp outputs to feed an external amp, a 75Ohm BNC digital output (which may require the supplied RCA adapter), RS232 and Ethernet ports, speaker terminals (designed for the supplied banana plug adapters) and connections for DAB/FM and Wi-Fi antennae. There’s also a signal ground switch, which allows you to select ‘chassis’ or ‘floating’ if there’s another earthed source component elsewhere in the system.

Inside the Naim UnitiQute is a preamplifier, which is a ‘distilled’ version of the pre-amp found inside the NaimUniti, plus a Wolfson digital-to-analogue converter with five 24bit/192kHz-capable digital inputs and a 2 x 30W power amplifier, which borrows its design from Naim’s NAIT 5i. 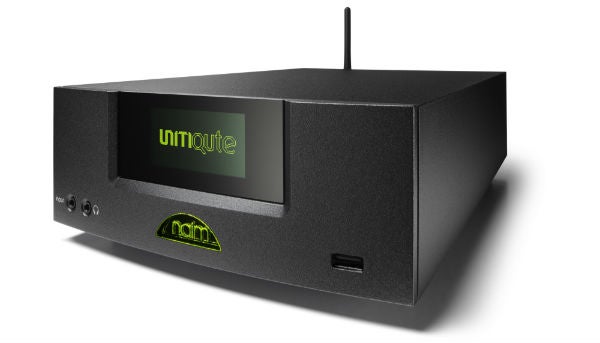 As mentioned, the UnitiQute boasts built-in Wi-Fi, which means you can wirelessly access content stored on uPnP devices (laptops, tablets etc) on your home network. It’ll stream WAV, MP3, WMA, AAC, FLAC, and it’ll play WAV, AAC, MP3 and Apple Lossless from an iPod. You can also use the Wi-Fi connection to stream internet radio (vTuner 5), but the DAB and FM tuners provide more conventional radio options. If you can’t connect via Wi-Fi, the Ethernet port provides a wired alternative.

When using the internet radio feature, the menu allows you to browse new and most popular stations or podcasts, browse by genre or location and stations you’ve added. There’s no search mode that would allow you to jump straight to your desired station, which is a shame.

There’s also a bass management system for use with sub/sat systems and switchable bass contour control for low-volume listening. 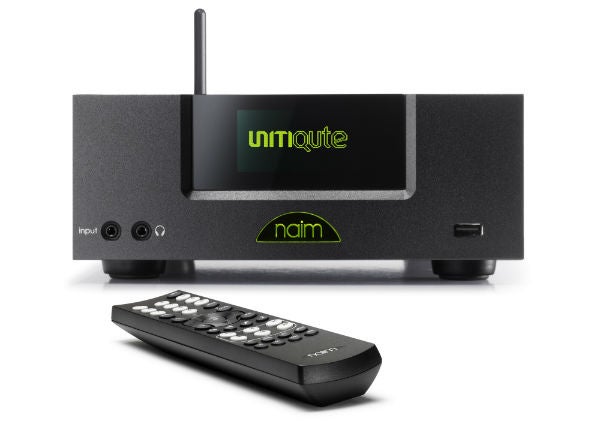 Operating the UnitiQute is a joy. The remote is thoughtfully laid out with menu controls bang in the middle, and other keys separated into black and white groups to make certain sections easier to find. Most of the labels use full words as opposed to cryptic icons, which helps useability. You can toggle through the inputs using the up and down keys, or jump straight to the one you want using the dedicated buttons at the bottom.

The front panel is dominated by a bright, crisp OLED display that shows crucial info like the selected input and volume, but defaults to the date and time when idle. All of the setup and media streaming menus are displayed here and it uses the space well, laying out the options in a clear, logical list without making it feel cluttered.

Wireless setup is nice and easy – it scans for access points automatically and password entry is simplified by the alphanumeric keys.

After blasting out tunes from a variety of sources using the built-in amp and a pair of Monitor Audio GX50s, the Naim UnitiQute reveals itself to be a superlative performer no matter what you throw at it. 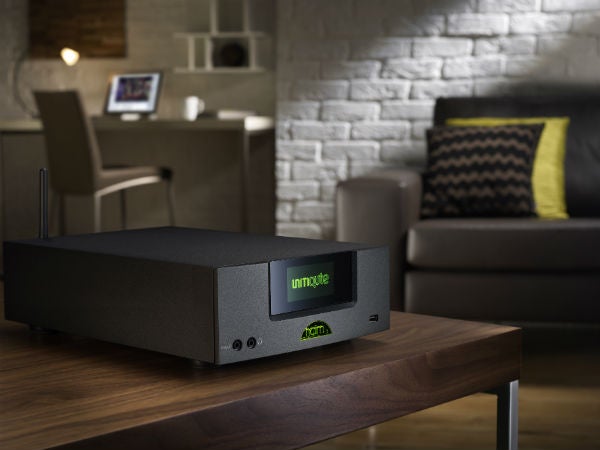 High-quality WAV and FLAC files really shine with their gorgeous, crisply-rendered detail and pleasing openness. Its sound is remarkably textured and subtle when the music calls for it, but it’s backed up with the punch and drive needed to get the adrenalin flowing. The cod reggae of Thievery Corporation’s Stargazer sounds fat and funky, with a stellar sense of rhythm,  exceptional clarity and deep bass notes.

The Naim UnitiQute also manages to make a silk purse from the sow’s ear of low-bitrate MP3s, and despite revealing the limitations of internet radio stations all too easily the Naim makes the streams sound eminently enjoyable.

Run a CD player through the digital or analogue inputs and the sound is polished and, again, astonishingly detailed – the gentle shuffling percussion of Ryo Kawasaki’s Trinkets and Things is picked out with sublime clarity, plus the warmth and richness of the music simply oozes from the speakers.

We also piped a movie through UnitiQute and it copes well. There’s real muscle behind Thor’s thumping hammer blows, while dialogue cuts through cleanly and other effects are smoothly handled. 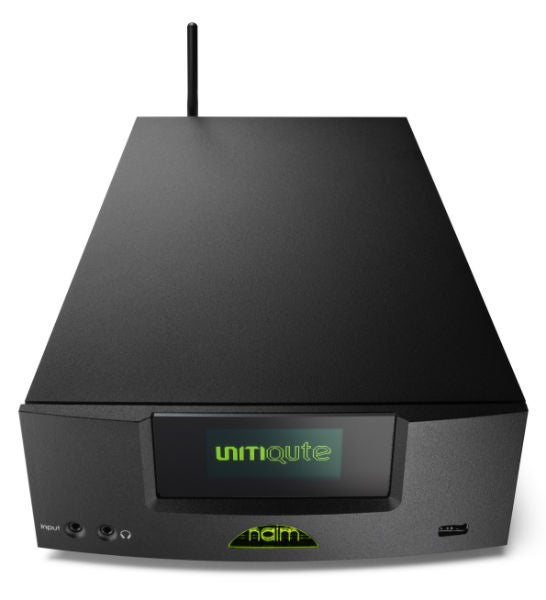 Verdict
The Naim UnitiQute is a stunning all-in-one audio player, melding high-end construction with sound quality of the highest order. It’s a very versatile unit, bringing Wi-Fi network streaming, USB playback and web radio into one compact box, with a generous range of connections for your external gear. Yes, it’s hugely expensive and a CD player would have been nice, but if you care about getting the very best out of your digital music library then you might consider it a good investment.