The NAD D 3020 V2 is a two-channel integrated amplifier, representing a reinvention of the company’s iconic 3020 budget model.

Ask any hi-fi fan of the 1970s or 1980s, and chances are their first foray into separates involved a 3020 amplifier. The build quality, performance and price made it the entry-level starter model of choice for decades.

The first D 3020 was a modern spin on that original amplifier, with the D prefix a clue to the new model’s design direction. NAD developed that product specifically for the digital generation, with digital inputs, DACs and built-in Bluetooth.

The second version reviewed here has a more refined look, and in an amusing twist of fate adds a phono input to reflect the current boom in vinyl.

The NAD D 3020 V2 looks almost identical to the earlier version of the device, but the company has made a few design tweaks. The new amp is still mounted on its side, which makes it flexible and tidy in terms of installation.

There’s a modern feel to the curved front panel, with an illuminated volume dial and input indicators. On the top are touch-sensitive controls for power and source select, but that’s it. 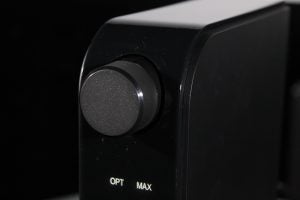 This elegant minimalism reinforces the fact that while the D 3020 might be an evolution of an earlier design, it remains a 21st-century product. Build quality is excellent, and the finish is classic NAD black. There’s a pleasing granularity to using the volume dial, while the illuminated source and volume indicators on the front are also clear and easy to read. 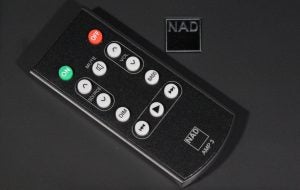 The D 3020 comes with a dinky remote control that, while rather small and fiddly, includes everything you need to effectively operate the amplifier. There are buttons for on/off, along with ones for cycling through the sources and changing the volume. There’s also a mute button, one for boosting the bass, and one for dimming the display. Finally, there are simple play/skip controls.

The NAD D 3020 V2 is a two-channel integrated amplifier that uses class D digital amplification to deliver 2 x 30W into 8-ohms and 2 x 100W into 4-ohms. The use of digital amplification not only results in decent power levels, but also presents improved energy efficiency and cooler running.

This amplification is combined with a high-quality 24-bit/192kHz DAC (digital-to-analogue convertor), with its eight channels mixed down to two for improved resolution. 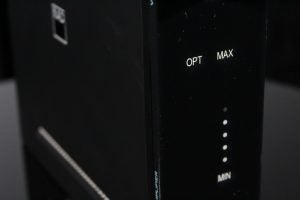 Aside from a 3.5mm output at the front, all the other connections are located at the rear. It’s here that NAD has made the most interesting change between version one and two of the D 3020.

Despite the amplifier’s digital aspirations, NAD has dropped the USB-B connection found on the V1 and replaced it with a phono input and grounding connection. This phono stage includes RIAA equalisation, an Infrasonic Warp Filter, and features high overload margins and very low noise.

This decision reflects two realities in the audio industry in 2019. First, not many people actually connect their computers to hi-fi amplifiers, so the USB port is largely redundant. Second, the market for turntables has exploded in recent years. As such, NAD finds itself in the amusing position of adding a 1970s feature to a 21st-century digital amp in order to reflect changing tastes. 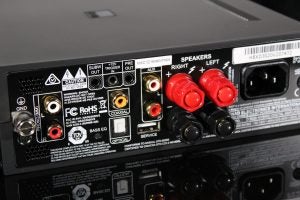 In terms of the other connections, there are optical and coaxial digital inputs plus a stereo analogue input using RCA connectors. The D 3020 is slightly limited by the fact it has only one of each, but you also get aptX Bluetooth, which is useful. There’s a subwoofer output, and unlike the preceding model there’s also a separate pre-out for increased connectivity in the output stage.

Finally, there’s a 12V trigger connection and a USB port for service purposes. At the rear, you’ll also find a connector for the three-pin power cable, and a pair of good-quality binding posts for connecting your speakers.

Since the D 3020 V2 has a 3.5mm connection at the front – which doubles as a headphone socket – and another at the rear, NAD also includes a 3.5mm to stereo RCA adapter, which is a nice touch.

The NAD D 3020 V2 might be a modern take on its illustrious namesake, but it manages to retain the quality that made that original amplifier such a classic in the first place. There’s an undeniable sense of fun to its delivery that results in a performance that’s both open and engaging. Whatever type of music you enjoy, the D 3020 is sure to put a smile on your face.

The fact you have a number of options in terms of how you connect your audio sources to this amplifier helps make it super-flexible, which is always useful when first building a hi-fi system. As with any amplifier, putting some thought into which speakers you plan to pair with the D 3020 will also pay dividends – although the amplification is sufficient to drive any decent sub-£500 speakers. 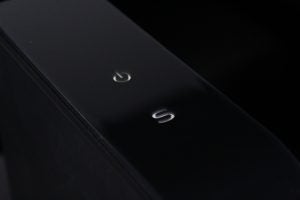 NAD has clearly put some work into its development of the class D digital amplification built into the D 3020, and has reaped the rewards of this effort. The sound is neither thin nor bright, and doesn’t appear to suffer from any of the limitations often associated with digital amplification. Instead, there’s a full-bodied quality to the sonic delivery, with a lovely sense of tonal balance and some impressively responsive transients.

The D 3020 is particularly effective at producing a spacious stereo soundstage, with some precise imaging and carefully placed instruments. Listening to classical music, there’s a real sense of an orchestra comprising many different instruments, rather than a wall of noise. The same is true with rock music, where each instrument is rendered with clarity, while the bass of the drums retains a tightness that drives the overall beat with an enjoyable urgency. 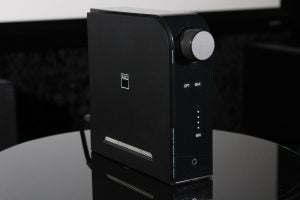 Depending on which input you choose, there’s a slight variance in terms of the overall sound quality. The two digital connections retain slightly more definition in the higher frequencies that isn’t present with the analogue input. However, this extra treble energy is well balanced, never sounding harsh or bright – but it does mean the D 3020 is slightly better suited to digital sources.

That shouldn’t come as a surprise, given this amplifier’s digital aspirations, and as a result the aptX Bluetooth connection also does an excellent job of matching the performance of the physical digital connections. If the majority of your sources are analogue in nature, then the D 3020 might not be the best choice. However, if you have fully embraced the digital revolution then this amp is ideal. 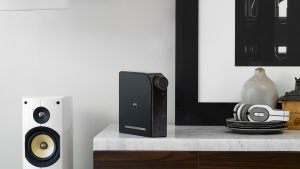 While it’s interesting that NAD has decided to add a phono stage, the D 3020 probably wouldn’t be the first choice of most vinyl fanatics. Those with a passing interest in this long-lasting analogue source, though, will certainly be pleased with this amplifier’s punchy delivery, and it’s certainly good enough for casual vinyl listening.

The NAD D 3020 V2 is an excellent two-channel integrated amplifier that achieves the goal of delivering a well-specified entry-level model aimed at the modern digital age. The design retains NAD’s classic minimalism, but adds some pleasingly modern touches. It’s extremely well made, but small enough to fit just about anywhere. The display is easy to read, the touch-sensitive controls are cool, and the remote is small but effective.

The connections offer plenty of choice, with optical and coaxial digital inputs, and a stereo analogue input. There’s also aptX Bluetooth, but in an amusing twist of fate, NAD has dropped the USB-B port found on the previous version and replaced it with a high-quality phono input. It’s an indication of the topsy-turvy nature of the audio world in 2019 that in an attempt to look forward, NAD ends up adding a feature from its past.

This entry-level amplifier proves a worthy successor to its illustrious namesake, with a fantastic sonic performance that benefits from a lively presentation and a thoroughly engaging sound. The stereo imaging is both precise and open, with lovely clarity and plenty of headroom. This outstanding amplifier offers impressive flexibility at a competitive price, so if you’re looking to build your first hi-fi separates system, the NAD D 3020 V2 is a great place to start.

While the treble energy of the 3020 v2 is well balanced, it does mean the D 3020 is slightly better suited to digital sources than it is analogue.