If ever a game encapsulated the mildly depressing state of next-generation gaming, Ninety-Nine Nights is it. It’s undeniably spectacular – every bit as spectacular as its origins as the showcase game that should have launched and sold the Xbox 360 in Japan would suggest. Yet it’s a game so fundamentally flawed on so many other levels that you have to wonder what everyone involved was thinking. If it weren’t so long delayed, we’d have to believe it was rushed. 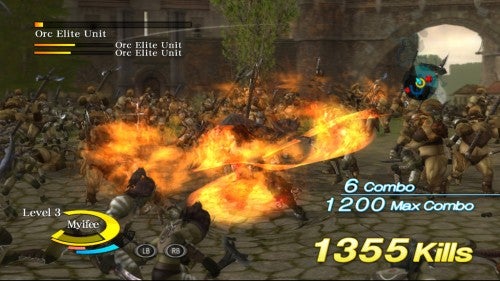 Let’s be clear about one thing: the visuals are phenomenal. We’ve all seen mass-battle games before – Dynasty Warriors, Spartan: Total Warrior, even Phantagram’s own Kingdom Under Fire – but we’ve never seen anything on this scale. At any one time there are hundreds of beautifully rendered and animated warriors onscreen, all running around swinging swords, polearms or axes at any enemies in the vicinity. The fantasy scenery is wonderful, with sun-pierced green forests and icy mountain fortresses straight from the pages of Tolkien. The combat looks amazing. Even the most basic attacks can see your hero scattering dozens of goblins like so many rag dolls, while the more spectacular combos see scores of foes despatched in glorious arcs of fiery death. And then, as if to show that was nothing, the game throws in incredible special power attacks that can wipe out hundreds – and I mean hundreds – of opponents at a time.


Just as impressively, N3 impresses when it comes to smaller details. Look at the way cloth moves as the characters strike blows, or at the intricately moulded, gorgeous shining armour. Effects are another key strength, with stunning lighting and some cool cinematic focus blurs that really add a sense of depth. From mysterious fog on the Pholya Flatlands to the snowstorms in the Vargaand and Castle Varvazaar levels, you can’t help but be blown away. Even on an artistic level, it’s a triumph. The character design is easily up there with the best of Square or Capcom, and the game has a beautiful, painterly look that shows you don’t have to take the super-realistic or the Perfect Dark/DOA4 plastic anime approach to make the most of 360 graphics. 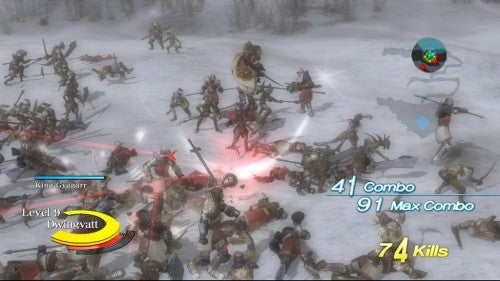 So when the dramatic score kicks in and the sounds of battle hit you with clang, screams and booms from every side of the room, it’s easy to get carried away. In its best moments, N3 really does have a thunderous epic feel. Whether you’re holding a bridge against a ceaseless goblin onslaught or walking into a vast goblin ambush, an overwhelming tide of green villainy rushing towards you, it’s hard to feel unmoved.


But sadly, that’s as good as N3 gets. Hard as it tries to bowl you over with its grand looks and grander numbers, N3 is a shockingly simplistic game. At its heart, it’s just a case of hacking and slashing through scores of monsters, following particular objectives (highlighted on a handy mini-map) and battering whatever gets in the way. There’s a certain level of character development – you can gather new weapons and bonus items, build combat experience, level up and learn new moves – but no real sense of any other development. From the start to the finish of each character’s campaign, you’re doing pretty much the same thing. And despite the game’s big selling point – the tale of a war told through the eyes of multiple heroes – you never feel that one hero is a major departure from the last. Teenage warrior queen, Inphyy, may be consumed by blood-lust while wimpy brother Aspharr is fighting for peace and muscle-bound Myifee is out to impress a hot warrior chick, but the actual gameplay is virtually identical. 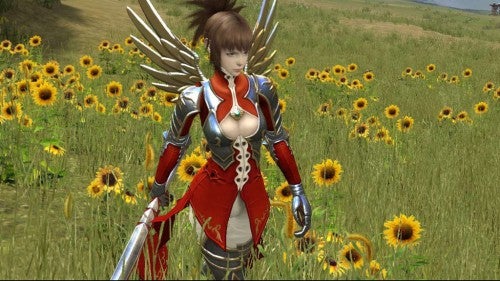 Part of the problem is the controls, with all attacks performed using combinations of X and Y, with the A key to jump for good measure. Its simplicity adds to the pick up and play factor, but as XXXYYY isn’t that much different from XXXXY, it also means that you soon forget about artful combos and settle in for prolonged button mashing. As for the strategy aspects, well these are even more basic. Most heroes have two squadrons of troops under their command (to whom you can assign simple orders) plus a couple of spare hero mates who tag along. However, as in many cases these only do limited damage to the enemy, you tend to forget they’re there after a while. In fact, there are only a couple of occasions when you can actually put them to good use, guarding an objective or keeping a certain enemy off your back. 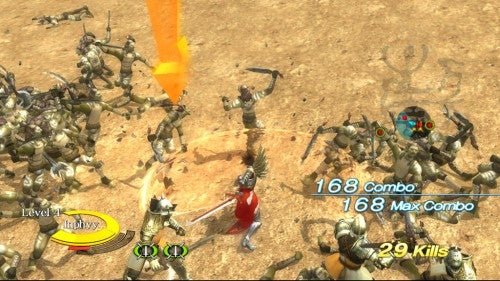 In effect, then, the only major tactical decision you make is which foes to attack in what order, and when to use your special powers. As with Capcom’s Onimusha, you have a red bar that fills up as and when enemies are despatched. Max it out, and you can unleash your first special attack: usually a range of devastating blows that can fell whole monstrous regiments in minutes. This in turn fills up a blue bar, and after three or four ‘red’ attacks you’ll have filled it up enough to unleash a devastating uber-attack that practically annihilates everything onscreen (bar any big boss baddies). Saving the red and blue attacks up for a special occasion is crucial to success in the game, and it’s about the only bit that really engages your brain. 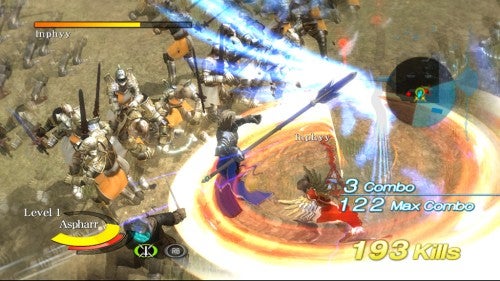 Now, simple isn’t necessarily bad. When it’s working, N3 is quite good fun, and who wouldn’t get a kick out of throwing whole gangs of angry orcs around like toys in a kid’s sandpit, or sending another cadre of leather-clad dark-elf ladies to their doom while their tame dragons wheel overhead. Admittedly, Spartan: Total Warrior did a lot of this last year in a more tactically complex and interesting way – and on the humble PS2 to boot – but if I just wanted a gobsmacking, simple action game to while away the odd half hour, N3 would have fitted the bill quite well. It was never going to be a classic ten out of ten sort of game, but it should have been a solid seven, maybe even an eight – if it weren’t for a barrage of disastrous game decisions that have all but wrecked the experience. 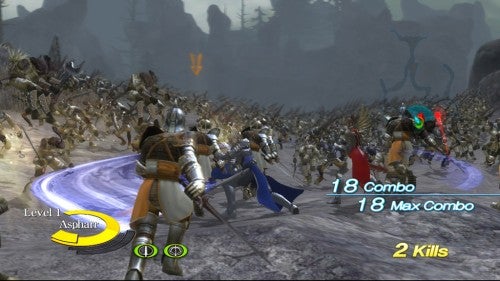 At the root of many of these issues is the bewildering choice to put no checkpoints or save points in a game where missions can last half an hour or more. Having battled through the siege of Vargaand for twenty-odd minutes, it’s no fun to be battered by a super-hard boss within seconds and find yourself restarting the whole shebang, and this isn’t an isolated incident: it’s something that happens time and time again as you play through the game. To up your stress levels further, the game plays oddly tight with health power-ups, meaning you can spend ten minutes or more racing around the battlefield desperately searching for a small rotating chest with a health potion inside, just because that’s preferably to starting the mission again from scratch. 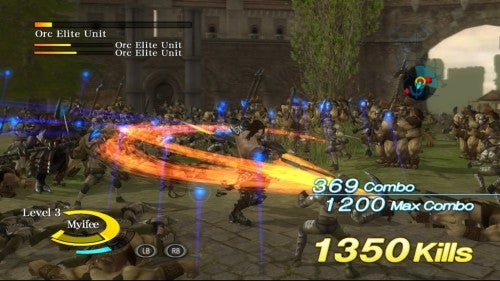 At these points, N3 feels like a bizarre Benny Hill skit, with your muscled hard man running around like a big Jessie with a string of dozy companions and angry foes in hot pursuit. What’s more, as some of the bosses can wipe out half your health bar with a single blow, you soon find it wiser to sneak in and whack them from behind rather than engage them mano e mano like a good hero should. The net result is that a game that should make you feel like a bold, mighty warrior makes you feel like anything but.


At times, the game is simply too difficult to continue, and it’s at this point that you realise that the current mission is beyond your character’s current level. The solution? Replay earlier levels again and again until you level up. This, ladies and gentlemen, is what we call a grind. And just when the veins are throbbing in your temples and there’s a stress-induced ache in your neck, N3 throws in its final piece de resistance of stupidity. Should the game go into a cut scene just when you’ve started a special attack, tough luck. When the black bars disappear and the game returns to action, your attack will have halted, your red or blue bar will be depleted, and your killer move will be utterly wasted. If this was a blue attack, you may be excused if you burst into tears of grief and rage. I did. 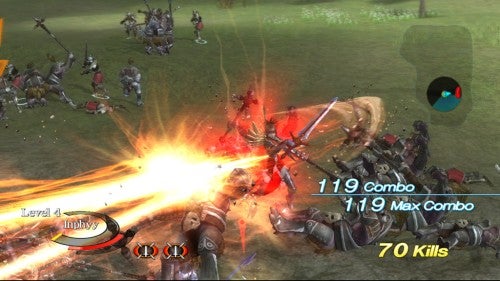 Add tears of frustration to that mix, because the worst thing about N3 is that somewhere in here is a decent game, and one that could even be turned into a great one with a little more imagination and a lot more playtesting. Instead, we have this beautiful, infuriating, dazzling, and slightly depressing misfire. With Saint’s Row, Dead Rising and Test Drive: Unlimited just around the corner, do you really want to waste your £40 on this?


An astonishing-looking fantasy epic, where the simply but enjoyable gameplay is wrecked by a series of baffling game design choices that are guaranteed to raise your ire. Highly disappointing. 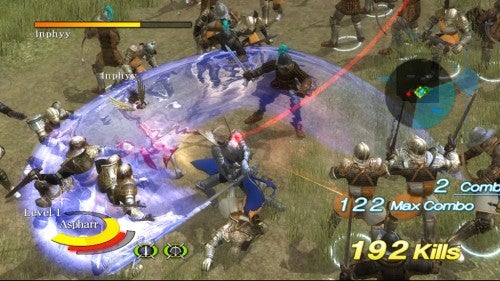