Gameloft has become notorious as a peddler of iPhone and iPad games that borrow the game design chops from popular console franchises. The N.O.V.A. series was always seen as a Halo copycat, but the latest in the series N.O.V.A. 3 rocks the boat. By taking more cues from Crysis and Call of Duty. No revolutions, then, but that doesn’t mean it’s not worth playing.

Gameplay – guns blazing?
N.O.V.A. 3 is a first-person shooter that’s heavy on aliens and heavy on action. You play as Kal Wardin, star of the show in the previous games. This time, the action opens as the Volterite army (that’s the baddies) invade Earth. As ever, it’s up to you to settle the score.

And, as ever with most first-person shooters, the story has relatively little bearing on play. However, it supplies the wide variety of game environments that help to keep N.O.V.A. 3 feeling fresh throughout its five hour single-player campaign. 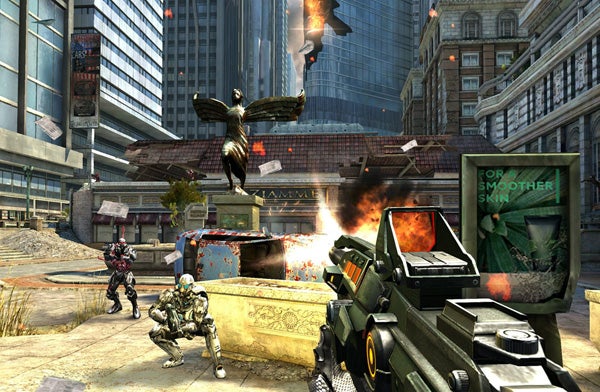 Rather than forcing you to build up a character from the ground up, slowly learning skills, N.O.V.A. 3 opens with you armed to the teeth, and holds your interest by giving its action a fast, highly-controlled rhythm. Tight set pieces, in which it’s fairly easy to die, are punctuated by frequent changes of scene and neat inside-your-head voiced cutscenes that let you catch your breath and step back from the action momentarily.

Visual flair
The acting isn’t spectacular, but giving other in-game characters a voice helps to give N.O.V.A. 3 a richness that most iPhone games lack. As do the visuals. They are beautiful, and not only because of their high-res textures and relatively colourful palette. The use of light is also great, the interplay of shadow and streaks of daylight giving what would be otherwise dull scenes a sense of visual drama.

N.O.V.A. 3 whisks your through scores of these beautifully desolate environments at such a clip that you could almost convince yourself Gameloft spends pennies on making beautiful alien worlds. This lavish excess of visual flair and environments makes N.O.V.A. 3 feel flash and console game-like in a way that almost no iOS games do. 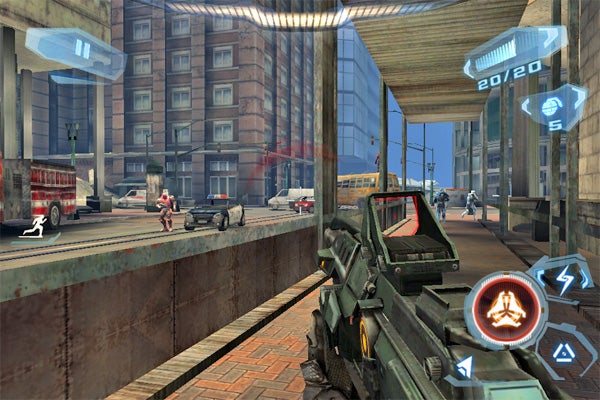 It adds significantly to the fun factor, too. N.O.V.A. 3 is a theme park ride of a shooter, usually funnelling you down a thrill-ride corridor. Definite, carefully thought-out strategies are rarely required. You’ll be fine to run and gun, then run away as your health ebbs away. You can take cover, but there’s no distinct cover mechanic, and your
“special move” is a fun distraction rather than a central mechanic. The vehicle sections, too, are all about fun rather than mastery, a diversion from the main game.

Controls
In super-soldier-like fashion, Wardin can slow down time momentarily from the start of the game, letting you get an advantage over groups of enemies. With the iPhone especially, we found that we often pressed the button for this feature accidentally, turning it more into a symptom of the problems of touchscreen FPS control, rather than an antidote to them.

Although undoubtedly one of the very best iOS first-person shooters in terms of control, it doesn’t get rid of that lingering sense of awkwardness. It’s not helped by a number of clunky elements within the game engine, either. Run too far too quickly, end up somewhere the game thinks you shouldn’t be, and you’ll find enemies behaving oddly. They’ll go behind cover right in front of you, or fail to acknowledge your presence as you point a shotgun right at them. AI is basic, in other words.

There’s a similarly wonky feel to much of the voice over scenes. Move on too quickly and the character talking will cut out suddenly, pulling you out of what is otherwise a remarkably immersive game. To get the most out of N.O.V.A. 3, you have to learn to play to its rhythm – a dance of furious action followed by tiny little breathers. And if you get tired of the single-player campaign, local Wi-Fi and 12-player online multiplayer modes are on tap.

N.O.V.A. 3 is a steady improvement of a superb first-person shooter series. It’s prettier, it’s slicker and feels thoroughly modern. Try and break through the walls of its world and you’ll find the quirks that label it as “just” a mobile game, but get the feel of the game’s rhythm, and there’s no mistaking this for anything but one of the very best iOS first-person shooters.