Available on Xbox 360, PS3, PC, Xbox One (reviewed), PS4
Say what you like about Murdered: Soul Suspect – at least it dares to be a different kind of game. It’s one of those rare detective games that actually focuses on detection, rather than dragging you from clue to clue and jamming in a nice shoot-out every now and then, and it even vaguely taxes your powers of observation and your ability to comprehend the facts.

Let’s not go crazy – we’re not talking about video gaming’s answer to Sherlock Holmes or Inspector Morse – but Murdered attempts to make it as some kind of cerebral adventure. Nor is the premise that straightforward.

Murdered takes the ‘who’s killed me and why?’ set-up of the B-movie classic DOA one step further, by making its hero, Ronan O’Connor, a ghost out to track down his killer, with the killer in question of the serial variety. Thrown out of a window and then shot for good measure, Ronan’s left in a kind of ghostly limbo, able to wander through walls and furniture or temporarily possess the living, read their minds and sometimes influence (though not control) their behaviour.

This all takes place in a creepy version of the New England town of
Salem, and there’s more than a hint of witchcraft and brimstone in the
air. 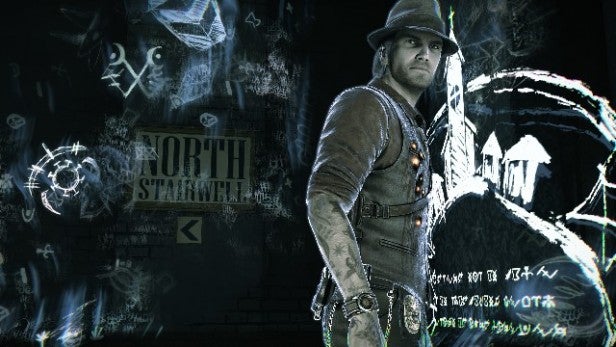 Being a spirit has its upsides and its downsides. You can’t manipulate most objects or open doors or windows for yourself, but then that’s not much of an issue when you walk through walls. However, while you’re theoretically free to wander where you will, in practice the game keeps you confined to specific areas.

It seems that Salem’s outer house walls, windows and doors were apparition-proofed long ago, and the actual flow of the game is relatively linear, dragging you from one scene of investigation to the next, with slightly more action-oriented sequences working to space them out.

In the investigations you wander around the immediate area hunting for clues, in order to resolve whatever question the plot has thrown up now. Clues might range from conversations you can eavesdrop in on while possessing, to physical evidence on the ground to psychically charged memories you can recreate and enjoy in flashback form. 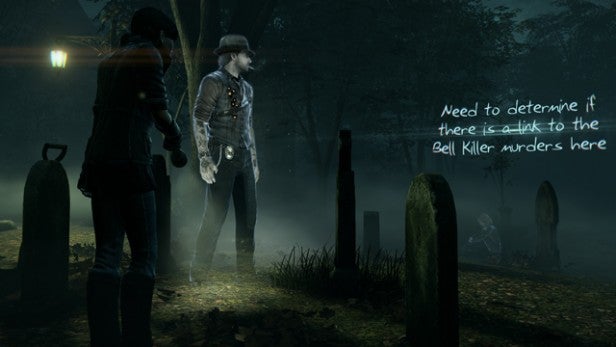 Collect a few together, and you can attempt to answer the current problem, selecting the most relevant clues or pointing to the right words when the game needs more detail. Cleverly, you don’t need to have all the clues to get the answer right. As long as you’ve found the most important evidence, you can make a stab at the right solution and push your way onwards through the game.

When you’re not investigating there are other things to keep you occupied. The biggest is simply getting to the next investigation; a task complicated by the whole ghost-proof walls thing, and by the emergence of other obstructions.

Early on these are dealt with by possession, either hitching a lift on a handy cop or civilian, or – more memorably – by taking direct control of a stealthy and acrobatic cat. Later on you’ll find yourself working with Joy, a teenage medium, who can move any obstacles for you provided you can do the same for her. 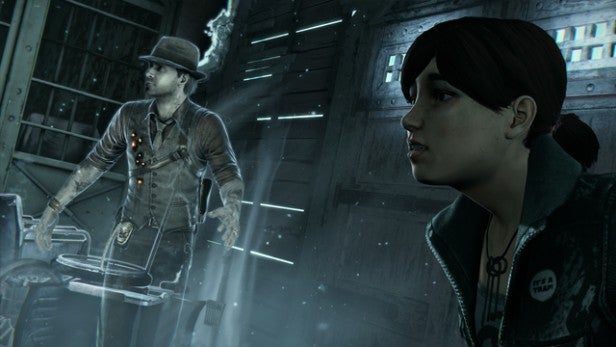 The most threatening obstacles are supernatural. Nasty pits of bubbling brimstone stuff must be avoided at all costs, while specific areas are haunted by demons – dementor-like fiends who do their best to devour your soul. In a more conventional game there would be some way to battle them, but

Murdered plays things differently, forcing you to hide in ‘dusk tears’, shadows left by other souls and pounce on the demons when their backs are turned. Dusk tears won’t keep you hidden forever, as the demons have a mean trick of ripping them apart to spill you out, so there’s a nice element of cat and mouse at play.

Beyond the main storyline you’ll also find side-missions, some of which simply involve revealing hidden ghostly objects to unlock the tale behind them, and some of which involve helping other tortured souls with their dilemmas so that they can take their walk into the light. These work like mini investigations, and add an interesting counterpoint to your own hunt. You can piece together the facts behind a drink-driving disaster, or help a distraught ghost understand how and why they died. 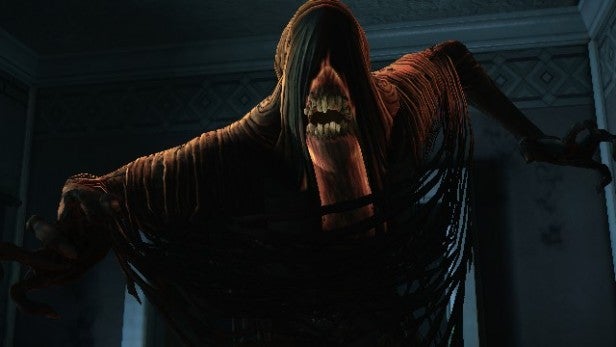 There is a lot of really, really great stuff in here, and the more you play Murdered, the more you appreciate the way the game avoids many of the tropes that are continually wheeled out by the legions of identikit action games. Unfortunately, it doesn’t quite live up to its initial promise.

Some of its weaknesses are reasonably minor. A handful of the demon encounters are horrifically annoying, breaking the flow of the action and throwing you out of the game. The more demons the game throws in, the worse this issue becomes. Nor is it the most technically impressive game. Playing on Xbox One there’s a lot of detail in the characters, and some beautiful lighting effects, but the scenery is very last-gen, just given a buff up to 1080p. 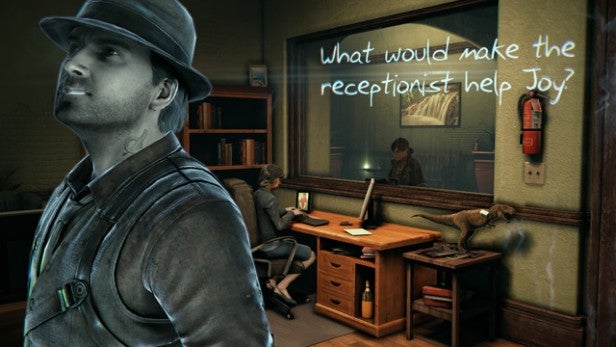 Salem itself disappoints in other ways. The way the limbo setting mixes mundane and spooky elements is superb, but the streets are almost devoid of human life, and the mortal characters you meet rarely have more than one or two lines to repeat ad-nauseum. With its cast of more intriguing, more dynamic characters, the world of the dead seems oddly more alive.

Most of all, the actual investigation gameplay doesn’t quite work. On one level, the game seems worried that you won’t get the answer, so finding the clues dotted around the area is actually harder – and often more frustrating – than working out what they mean.

However, you then have to pick the right clues to prioritise, which means thinking pedantically like the developers and choosing the exact ones they have chosen. After a while this becomes second nature, and it’s not as if there’s any real penalty for getting it wrong – you just lose points in a score system you won’t care about anyway. All the same, it doesn’t exactly make you feel like a Holmes or a Morse. 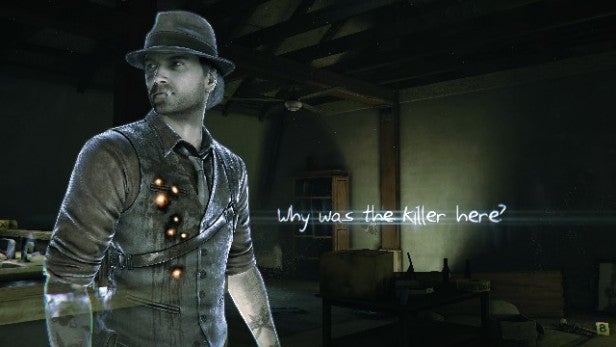 In fact, you can’t help feeling that Murdered gives you an interesting set of tools, but no real scope to use them bar the way the developers have set down. You can use poltergeist powers to activate specific objects and cause a distraction, but only on a tiny number of objects, and only when the situation allows.

You can influence some of your ‘possessees’ or make some peek at whatever it is you want to look at, but again only a handful allow you access to the option. A better game would have allowed for a range of solutions and approaches. With Murdered it’s a case of ‘do it this way’ or don’t do it at all.

This isn’t a total disaster. After a bad start we grew to like Ronan for all his clumsy bad boy quirks, and once he makes friends with Joy there’s some good repartee in the script. Ignore the faults, and the adventure is surprisingly engaging, and while you might not care too much whodunit, you’ll be wrapped up in the spooky hows and whys.

Murdered isn’t a great game, but it’s a half-decent one that could have been amazing. In a strange way that makes it more interesting than a better but more generic title. We like it, but we’d like to see more.

Verdict
Murdered does its best to suffocate some great ideas while its investigative gameplay has its flaws. Yet there’s something refreshing about this spooky detective story, and if you can live with some cardboard characters and scenery then the engaging narrative will pull you through. There’s potential here for something smart, unusual and compelling, even if this first instalment doesn’t quite make it happen.