This is one of MSI’s most important motherboards. The Z270 SLI Plus uses Intel’s best chipset, and it’s designed for all manner of tasks – the Plus designation marks this board out as a workhorse, but its SLI branding also means it should be great for gaming.

Related: Everything you need to know about intel Kaby Lake

It certainly looks like it’s ready to knuckle down to work. Its southbridge and northbridge are shielded by heatsinks that mix black metal with angular, bright slashes. The bright areas on the heatsinks are paired with steel around the two primary PCI-Express slots and between the four memory sockets.

The businesslike design means that there aren’t any RGB LEDs on this board. That bucks the trend among other motherboards, but it suits this product – it wouldn’t look right with multi-coloured lights everywhere. 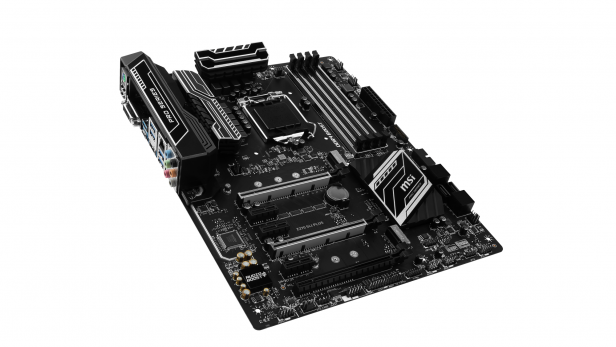 Instead, you get white lights around the back of the board and an RGB light-strip header, both of which can be customised in software. There’s also a row of handy diagnostic LEDs on the board itself.

The MSI’s no-nonsense design gives way to solid core features. It matches most other boards on the market by running its DDR4 at a lofty maximum of 3800MHz, and the storage array includes two M.2 sockets and six SATA 3 ports. I’d have liked to see a U.2 port or a SATA Express connector, but these are still niche offerings, especially at this end of the market.

The two PCI-Express x16 sockets run at 8x speed if they’re both deployed, which is perfect for dual-graphics – which is handy considering this board’s name. The MSI supports two-way Nvidia SLI and three-way AMD CrossFire, which is fine – few people realistically need more than two GPUs.

Those two slots are accompanied by a slower PCI-Express 16 slot that runs at 4x speed, and there are three PCI-Express x1 sockets. 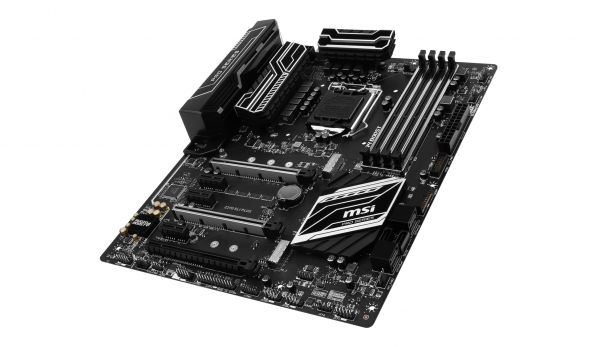 The backplate is well-specified, too. It’s got four USB 3 ports and Type-A and Type-C connectors, and it’s one of few motherboards to have six audio jacks.

The sensible MSI doesn’t have on-board buttons or a POST display, but that’s fine – especially when the rest of the layout is solid. The fan headers are well spread around the board, and there’s ample room around the CPU socket and memory slots. The SATA ports are all perpendicular to the board itself, and the top M.2 port won’t be blocked by a graphics card. The various headers aren’t protected by plastic surrounds, but that’s a minor gripe.

The no-nonsense MSI board proved quick and consistent in the application and productivity benchmarks. Its single-core Geekbench 4 result of 5799 is within a margin of error of the fastest and most expensive boards, and it managed a score of 19,934 in the multi-core test – another solid result that’ll help swat aside work tasks. 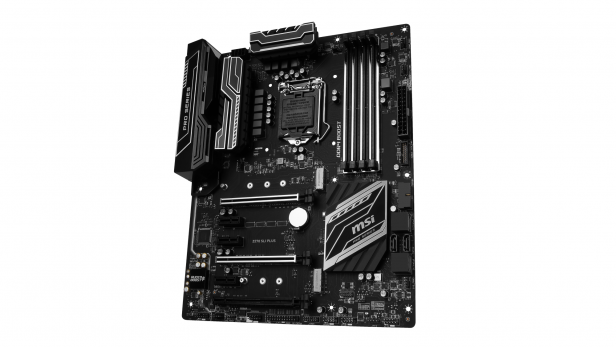 Those good application speeds are bolstered by the MSI’s storage results. Its CrystalDiskMark read and write speeds of 514MB/s and 500MB/s are only a couple of megabytes behind the best boards, which means boot times and application loading speeds won’t suffer because of this product.

The MSI’s 3D Mark result of 6781 is almost 100 points behind top gaming motherboards, which isn’t a huge difference but does show you can squeeze a little more performance out of your system if you opt for pricier ‘boards.

It’s not a particularly efficient board, either, thanks to idle and peak power requirements of 53W and 104W. The former figure is middling, while the latter is poor for a mid-range Intel board.

The MSI drops high-end features and record-breaking performance, then, but it comes to the fore in other areas.

It’s solid in application benchmarks, for instance, and it has every core feature you’ll need to build a rig for work or play. The layout is good, too, and it abandons enthusiast extras and silly lights in order to bring the cost down.

This board won’t attract too much attention, but it goes about its business with impressive calm – and a good range of features. It’s a very good affordable mainstream option.

This board isn’t one for flashy design or high-end features, but it offers a solid specification and consistent benchmarks – and that makes it ideal for a wide range of tasks. Its £136/$174 price is pretty good, too, so it’s an excellent Intel-based option for a mainstream build.