Most motherboards stand out
from rivals by serving up chunky heatsinks, whacky colours and of course
an array of extra features, but MSI’s Z170A Gaming Pro breaks the mould
by dedicating a centimetre or so of its entire right-hand side to a
strip of multi-colour LEDs.

Changeable to whatever colour the
user desires, they’re designed to make for the ideal way to match your
motherboard to the rest of your PC’s lighting scheme. But is it all show and
no go?

The
Gaming Pro is one of the best looking motherboards I’ve tested so far.
Like many, it sports a black and red theme but here it’s done in as
minimalist way as possible, aside from the great big strip of light down
the edge of course.

It’s actually a slightly odd decision to go
for red trim on some of the components as the matching-by-default LEDs
can actually be changed to a different colour, meaning the red bits
would now clash. A more sensible colour might have been silver or white. 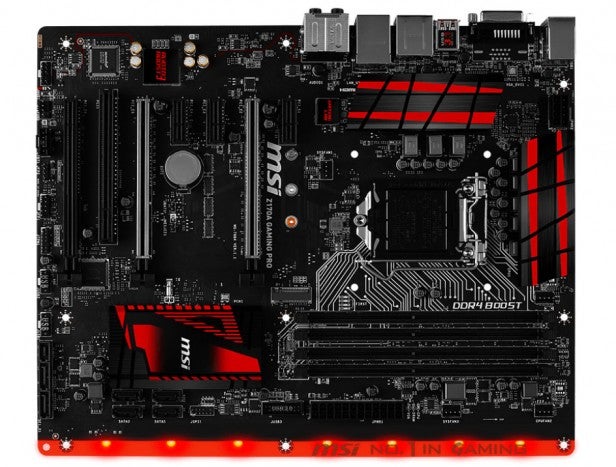 You
also don’t get a shroud of any sort over the rear IO, which I
certainly don’t mind but judging by all the other boards I’ve recently
tested it seems to be the in thing. They serve no purpose other than
looks so I’d much rather the money were spent elsewhere.

Sadly
that modest approach is also reflected in the overall feature set. You
miss out on any onboard extras like power switches, LED post readouts
and overclocking buttons, plus the audio chip is pretty basic.

The
layout also has a few compromises. Most obviously, the strip of LEDs –
which are actually embedded into the PCB, making the whole edge of the
PCB light up – mean none of the SATA ports are on at a right-angle but
instead face straight out from the PCB. That means cable management
won’t be as easy and they’ll trail over the lighting strip anyway.
There’s also a dearth of fan headers at the top of the board where
they’re most conveniently placed for attaching to top- and front-mounted
coolers.

At least the sole SATA Express socket is on the bottom
edge where it’s a little easier to tuck cables away. Also, you do get an
M.2 SSD slot, and it’s positioned so you can just about access it
without having to remove a graphics card.

You can fit up to
three graphics cards for up to 3-way Crossfire or quad-SLI (two cards
with dual-GPUs) or alternatively there are three x1 PCI-E slots for
other expansion cards, plus an old PCI slot for legacy hardware – ideal
for those still rocking old sound cards for instance.

There’s
also no DisplayPort onboard Intel graphics, which for most users won’t
be a concern as they’ll be using a separate graphics card, but it’s a
notable difference nonetheless. You do at least get gold-plated audio
connections and an illuminated LAN port though!

So although the
onboard features are modest, there are quite a few things you can do
with MSI’s software. There’s a one-button tool for overclocking the
processor, an option for prioritising network traffic, and a utility to
assign hotkeys and macros to your keyboard even if it’s not a gaming
model that offers support for these features.

All
this modesty in specification is reflected in this board’s performance.
While at stock speeds a motherboard only makes a minimal of difference
to system performance – it’s all about overclocking potential – this
board nonetheless came last in our Cinebench R15 multi-core CPU
benchmark.

Its score of 10723 in 3DMark FireStrike is also second from bottom of the five Z170 motherboards I’ve tested so far. For comparison the best results I’ve obtained so far are 659 for Cinebench and 10802 for 3DMark.

Compounding the slightly underwhelming performance results is that this board consumes the joint most power at idle – 40W, although it actually consumes the second least while under load – 278W. 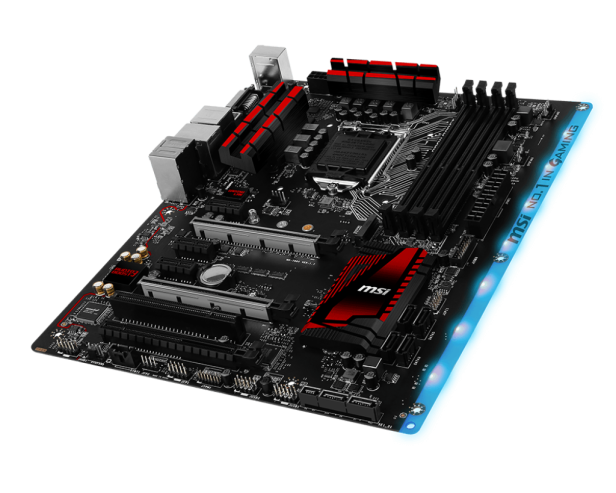 Should I buy the MSI Z170A Gaming Pro?

There’s not a lot that really stands out about the Gaming Pro other than its design. Its price is fairly modest but its feature set and performance is a step below what’s offered by other models at this price – it does seem slightly compromised by that LED strip.

Still, it’s a perfectly adequate board, particularly if you’re not overly interested in heavy overclocking and it certainly does look the part. Plus the addition of a PCI slot makes it potentially attractive to those with older expansion cards they’d still like to use.

The MSI Z170A Gaming Pro is no powerhouse but is a perfectly adequate Z170 motherboard with a stylish look. Not one for heavy overclockers but if you’re after something stylish it could fit the bill.