A few weeks ago I referred to the MSI X58 Platinum as a budget X58 motherboard thanks to a price around the £225 mark. That makes it tricky to hang a tag on the MSI X58 Pro as it is priced a full £50 below the Platinum so we’re going to have to come up with a new rating system. Hmm, perhaps we need a supermarket theme with the high end MSI X58 Eclipse as Waitrose, the X58 Platinum is Tesco and this Pro model might be Lidl.


Grab your trolley and let’s go for a tour of the aisles. 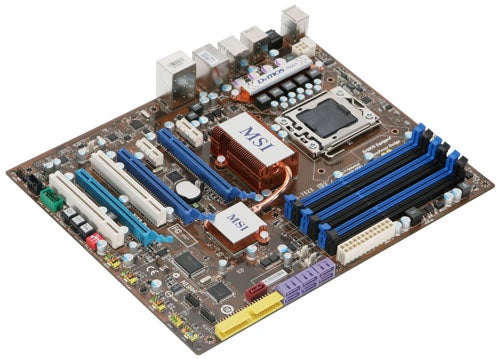 The specification of the Pro includes the essentials however it’s not exactly generous with the ports and connectors. There are dual PCI Express 2.0 graphics slots that support CrossFireX with a third, long PCI Express slot that only has four lanes of bandwidth. We’ll come back to graphics support later as we have something interesting to report in the meantim. In addition there are two PCI Express x1 slots and two regular PCI slots so you should have no trouble adding any expansion card that you choose.


Things are a bit less rosy on the I/O panel as there are two legacy PS/2 ports, an optical audio TosLink connector, six USB 2.0 ports, one Firewire, one eSATA, Gigabit Ethernet and six audio mini jacks. The stacks of ports are widely spaced so there is nothing to stop you using any port that you choose. Our concern is that six USB ports seems inadequate and there are no USB brackets in the package however there are headers for six more USB ports on the board. If you have case mounted USB ports you’ll be fine but if not you may be struggling.


The layout of the X58 Pro is generally quite good with the main power connector located outboard of the six DDR3 memory slots and the eight pin EATX connector in the corner behind the PS/2 ports. The six SATA connectors and single ATA133 connector are laid down keeping them from interfering with long graphics cards and making it simple to hook up the cables to your storage drives. There is a single, solitary vertical SATA connector that stands just inboard of the ATA133 connector, where it may cause problems, but we think that six SATA ports will be sufficient for most people anyway. 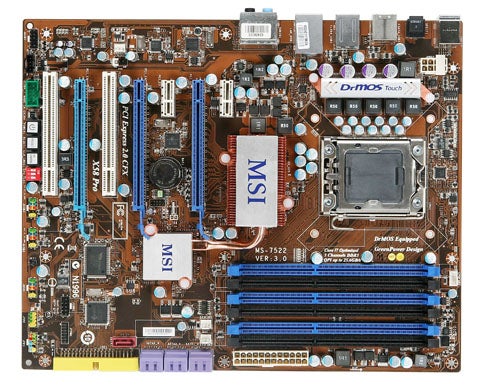 At the foot of the board are three micro buttons for Power, Reset and Clear CMOS along with a block of dipswitches to control the hardware Base Clock setting feature.


There’s one area where MSI has let the side down and that is in the fan headers department. The CPU fan header is correctly located but the three case fan headers are in lousy positions. Two of the connectors sit just above the main graphics slot but they are too close to the slot and are blocked by a mid-range graphics card such as a GeForce 8800 or Radeon HD 3850. To add to the problems the third fan header is blocked by any graphics card that you choose to install in the second graphics slot. We don’t usually get too exercised by the number of fan headers on a motherboard, provided there are one or two available if you feel the need for a spot of extra cooling. The problem is that MSI has chosen to use a small passive cooler on the chipset and it gets surprisingly hot.

Temperatures loiter around the 55-60 degree mark in regular use and rose to 75 degrees when we ran a pair of GeForce GTX 280 graphics cards in SLI. That’s right, SLI. We’ll come to that shortly. The point is that we strongly feel that the X58 Pro needs a case fan to keep the chipset cool and it is quite possible that you won’t have a fan header available for the task. 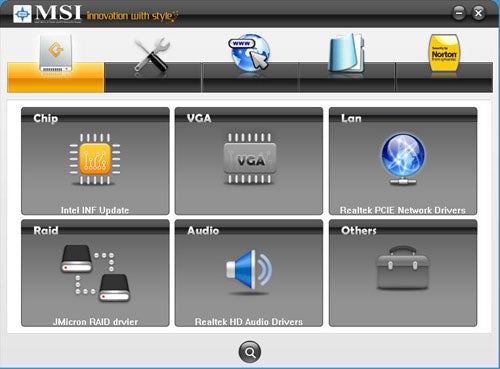 Once the X58 Pro was running we installed the MSI software and found that the installer has been given a makeover and looks far slicker than in the past. The utilities are the Windows-based BIOS update tool, Live Update. The two other pieces of software are Overclocking Centre and Green Power Centre II which are very similar with one utility putting the emphasis on overclocking and the other on power saving. Unfortunately Overclocking Centre allows you to adjust voltage and Base Clock settings but not the clock multiplier so it wasn’t much use for overclocking our unlocked Core i7 965 Extreme. 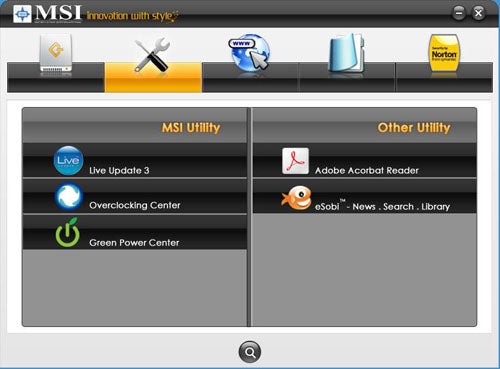 We headed into the BIOS and found that the CPU voltage is set as a relative value rather than as an absolute while all of the other voltages are set as absolutes, which was all a little confusing. Our CPU required +0.23V to achieve the 1.45V that we have found produces results and then things got interesting. With the X58 Platinum we found the options for overclocking were rather limited and we could only run our 965 Extreme at 28 x 140MHz = 3.92GHz. With the Pro we could pick and choose any permutation of base clock speed and clock multiplier to achieve a clock speed of circa 4GHz and the system was remarkably tolerant of our abuse.


We had to clear the CMOS a couple of times when we took things too far but that was also easy with the on-board micro button, which incidentally only cleared the overclocking settings and retaining date and time settings. 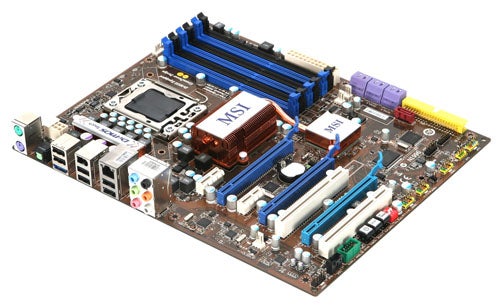 Once we had finished overclocking we followed a hint from MSI and installed the BIOS from the X58 Pro SLI motherboard. We downloaded BIOS version 8.0, booted with a USB key and installed the BIOS without any trouble. The result was that our X58 Pro suddenly gained the ability to run SLI as well as CrossFire so we plugged in a pair of GeForce GTX 280 graphics cards and ran a quick set of benchmarks which delivered impressive results.


Clearly the X58 Pro and X58 Pro SLI are identical pieces of hardware and it is the BIOS that enables SLI in the Nvidia drivers so if you want to run dual Nvidia graphics cards on the cheap, you know what to do.


There’s no denying the X58 Pro is a remarkable good value Core i7 motherboard but we feel that a grave error has been made with regard to the chipset cooling.