If you want an AMD board with plenty of features and good aesthetic design then the MSI is a solid mid-range option. For pure gaming performance, however, there are better options available.

What is the MSI X470 Gaming Pro Carbon?

The £170 price for the MSI X470 Gaming Pro Carbon puts it right in the middle of the market for gaming motherboards, and it also makes it £17 more expensive than its nearest rival, the ASRock Fatal1ty X470.

That slightly higher price gets you one of the best-looking mid-range gaming motherboards around, but what about the rest of the specification? 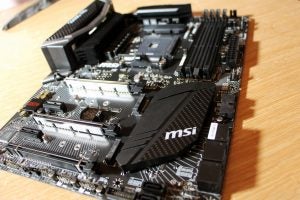 The MSI’s rear I/O cover and southbridge heatsink are coated with an eye-catching carbon-fibre pattern, and the rest of the heatsinks are finished in matte metal. The heatsinks are a little chunkier than those on the competing ASRock and a little better-looking too.

MSI’s board goes one further when it comes to RGB LEDs too. You’ll find lighting features in its major heatsinks, just like the ASRock, and there’s also a row of lights on the rear of the board’s top-right edge, which add a glow to the rest of the system.

There are three on-board RGB LED headers for adding your own lights too, which is two more than what the ASRock offers.

In more conventional departments the MSI’s specification is closer to the ASRock. Both boards support 64GB of DDR4 memory at 3466MHz – a step behind the best boards in terms of speed, but still plenty enough for mainstream machines. 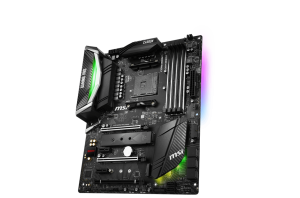 With eight SATA ports, the MSI has two more than the ASRock. Plus, it has two M.2 slots, with the first operating at full speed and the second using the slower, older PCI-E 2.0 standard. However, this second slot still offers twice as much bandwidth as the ASRock’s second connector. Any particularly fast SSDs in this second slot will still be bottlenecked, but the impact won’t be as severe on the MSI.

Both boards have beefed-up audio circuits and game-friendly Ethernet. In a few other departments, the MSI opens a small lead over the ASRock. Both boards have five USB 3.1 ports and a Type-C connector, but the MSI also has two USB 2 connectors. It includes a Clear CMOS button at the rear, and more CPU power connectivity for more ambitious overclocking. Its DDR4 slots are supported by steel.

The MSI board does cost a little more than the ASRock, but it’s clear to see where the extra budget has been spent. MSI’s board goes a tad further in numerous areas and will thus support a more ambitious build. 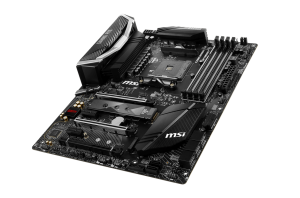 It’s a shame that the MSI’s good specification doesn’t hold up in terms of gaming performance. Its 3DMark: Time Spy result of 4105 is the worst in the group, and almost 30 points behind the ASRock. Its Fire Strike score of 10,793 is the second-poorest here, and still a fair distance behind the ASRock.

Those poor theoretical results translated to disappointing gaming pace. Its Middle-earth: Shadow of Mordor minimum of 64.09fps sat in the middle of the results table, but its average of 91.17fps was the worst in the group and more than two frames behind the ASRock.

The spread of scores in Rise of the Tomb Raider was wider, but here the MSI averaged 64.38fps. That’s almost the worst in the test, and a long way behind the 73.07fps of the ASRock.

Unexpectedly, the MSI proved better in non-gaming benchmarks. Its Cinebench single and multi-core results of 177cb and 1,398cb are in the top half of the group, and a little quicker than the ASRock. Its Geekbench results of 4872 and 22,146 are, surprisingly, the best in the entire test.

The MSI’s memory bandwidth scores are table topping too, and its storage results sit mid-table but are a little slower than the ASRock. 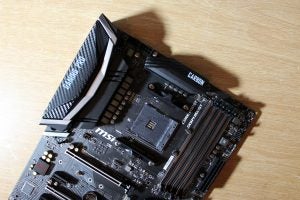 The MSI may have gaming branding, but its gaming performance is poor. Motherboard benchmark scores differ by tiny margins, and are unlikely to be felt in day-to-day use, but tests prove that the MSI X470 Gaming Pro Carbon isn’t the board to buy if you do want the best frame rates you can get. At this price, the ASRock is certainly better.

However, the MSI board is surprisingly better with applications, and it does have more features than the ASRock.

If you want to buy a board with plenty of features and good aesthetic design, and don’t mind giving up a bit of performance to do so, then the MSI is a solid mid-range option. For pure gaming performance, however, the ASRock is superior.

MSI’s latest board may be designed like a gaming product, but it isn’t very fast in games at all. For the best frame rates at this sort of price, the ASRock Fatal1ty X470 Gaming K4 is better.