What is the MSI X370 Gaming Pro Carbon?

The Gaming Pro Carbon is one of MSI’s current flagship products, with a broad range of features and support for AMD’s barnstorming range of Ryzen chips – but its £172/$220 price means it’ll have to perform well to justify its premium positioning.

MSI’s board is one of the most striking I’ve seen for a couple of reasons. Its carbon-fibre PCB, heatsinks and IO shroud make it look darker than most, but it creates great contrast with the RGB LEDs and shiny steel slots to come to the fore.

Those RGB LEDs are found behind the top-right corner of the board, coursing through the audio circuitry and slashed dramatically through the heatsinks. Those slashes help the lighting stand out, and the illuminations are subject to the usual customisation – 16.7 million colours and numerous patterns, with CPU temperature recording also available. There’s also a single header for hooking up a light-strip and synchronising it with the motherboard’s RGB setup. 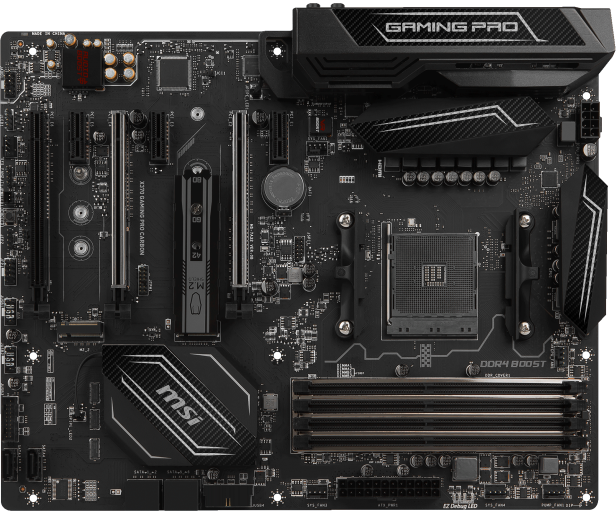 The steel shielding is used to anchor heavy graphics cards, and it’s around both primary PCI-Express x16 slots here – many gaming boards only shield the first slot. That’s useful, but I’m not sure why the metal has been used around the memory slots; presumably it’s just for show.

The board’s specification is underpinned by the AMD X370 chipset. It’s the top chipset that can accompany a Ryzen processor, which means a solid set of features including maximum support for SATA ports, PCI lanes, USB connectors and dual-graphics ability.

The DDR4’s peak speed of 3200MHz and capacity of 64GB are entirely normal and should sate everyone who buys this board, and there’s a solid amount of PCI potential: the two main x16 slots run at their full speed, and the single PCI-Express x16 4x slot and trio of PCI-Express x1 sockets provide ample room for numerous expansion cards. As usual, this board supports three AMD GPUs and two Nvidia cards– only the most expensive gaming boards with advanced chipsets offer quad-SLI these days.

There are two M.2 connectors, which is one more than many AMD boards offer and on a par with most high-end Intel PCBs. And, impressively, MSI includes a tiny heat-shield that can help cool a faster M.2 SSD that could get a little toasty beneath a graphics card. There are the usual six SATA ports, too.

I also like the fact that MSI includes six fan headers, including one that monitors water-cooling units – that’s one more connector than many gaming boards offer. 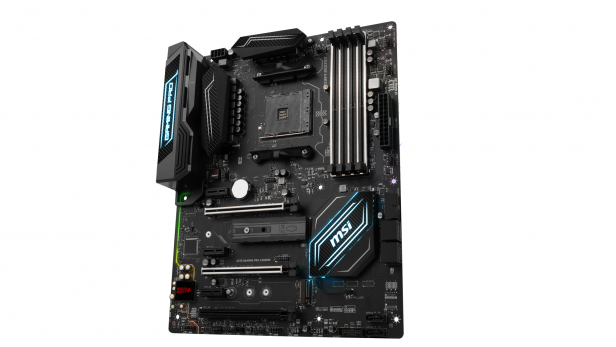 There’s beefed-up audio and Ethernet, but other boards go further in this area, with features that promise a little more. And there aren’t any on-board buttons or displays, which is a little disappointing given how useful they can be when tinkering with overclocking and new components.

Some gaming boards deliver good performance in all categories, whereas some just concentrate on nailing the latest titles – and placing less emphasis on every other aspect of performance.

MSI’s board falls into that latter category. Its 3D Mark Fire Strike score of 6961 is fantastic – the best I’ve seen from this latest clutch of AMD boards.

That bodes well for games, but the MSI could only manage results of 4497 and 23,379 in the Geekbench 4 single- and multi-core tests. Those results are the slowest I’ve recorded from the selection of Ryzen boards, which is a little perplexing. But given how close all the Ryzen boards performed, it’s not a huge issue and it shouldn’t put most people off buying this otherwise excelent boards.

SATA storage performance was near the bottom of the pack as well: the MSI’s read and write speeds of 513MB/s and 512MB/s are beaten by three other AMD boards by a small margin.

And, unsurprisingly, this is a power-hungry board – its peak power draw of 125W is the highest figure I’ve recorded on Ryzen, and it’s higher than anything that uses Intel Core i7.

Should I Buy the MSI X370 Gaming Pro Carbon?

This, then, is a board with a singular purpose – its gaming result is top-notch, but its performance elsewhere is middle-of-the-road in this very tight group.

There’s still loads to like: Its got that X370 chipset, plenty of expansion slots, plenty of fan headers and game-friendly audio and Ethernet. There aren’t any buttons or displays, which is a bit of a miss for an enthusiast board.

The range of features and impressive gaming benchmarks mean I can easily recommend this board for those building high-end AMD systems, although you might reach slightly higher application performance with other boards.

This eye-catching board has a broad and versatile range of gaming features, and no other AMD-based motherboard has been able to outpace this board in the 3D Mark gaming test. That makes it ideal for gaming machines, although its slightly underwhelming application performance means I’d look elsewhere if productivity software was of critical importance.