Aside from Apple’s exclusive iOS on its iPad and iPad2, the two tablet OSs
most in favour are the Gingerbread flavour of Android and Windows 7. The latter
is a bit of a gamble, because the simple fact of the matter is that Windows 7
was never intended to be controlled exclusively with a touch interface and was
most certainly not designed for tablets. However, for many tasks and for using
the software from your PC, it’s still the only choice. As such, in addition to
a 10.1in Android tablet (the WindPad 100A), MSI has also brought out a Windows version,
logically named the WindPad 100W. The 100W offers Full HD video, Flash web
browsing and HDMI-out on an affordable PC tablet, so join us as we find out how
it holds up. 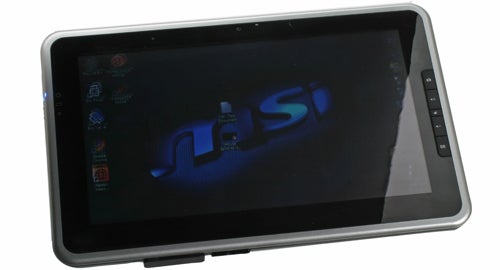 Unfortunately, on opening the box first impressions are far
from encouraging. The tablet is constructed from cheap-looking plastics,
features a wide bezel and, at 18.5mm thick, is unapologetically chunky. As if
this weren’t bad enough, its semi-matt buttons (which should have been placed
on the sides rather than the front in the first place) don’t match the inner
bezel’s piano black finish, and the silver outer bezel looks like it was
painted on.

Ports have also been integrated with all the subtlety of a
sledgehammer, and despite the tablet’s thickness stick out like sore thumbs –
in one case literally. You see, the 100W has a proprietary docking connector,
which is hidden by a huge rubber cover that protrudes significantly from the
chassis. And it’s not even attached to the tablet, meaning it’s quite possible
to lose this cover altogether, after which dust and dirt can easily get into
the tablet’s exposed circuit boards. Then again, you might just be tempted to
chuck the rubber bung in the bin anyway after it catches on something for the umpteenth
time.

Thankfully build quality isn’t bad to the point of being flimsy, but there’s no denying that the WindPad 100W looks and feels
like a cheap plastic toy rather than a tablet that still costs £500 in most shops.

The one advantage of its thickness in combination with its
rounded edges is that it is quite comfortable to hold – as long as you manage
to avoid the ports, that is. However, weighing in at a relatively heavy 800g,
it’s certainly not a tablet you can hold one-handed for any amount of time.

Unfortunately, the bad news continues with the provided
carrying case. It’s actually quite an attractive black leatherette attempt with
a magnetic clasp, but like the tablet it’s meant to hold, its design is flawed
in many ways. For one thing, it can’t act as a stand, like the ingenious example
provided with the ViewSonic ViewPad 7. For another, you can’t even view the tablet’s screen with
the case ‘attached’. It’s purely a carrying pouch, and to use the tablet you’ll
have to take it out. In terms of functionality and practicality this is very
disappointing. Nor is the case helped by its slightly awkward closing clasp,
which we feel is largely superfluous.

So far then, we haven’t been particularly impressed with the
design of the MSI WindPad 100W. But we’re willing to put up with an ugly
exterior if there’s enough beauty under the hood. Unfortunately, the Windpad
falls down here too. 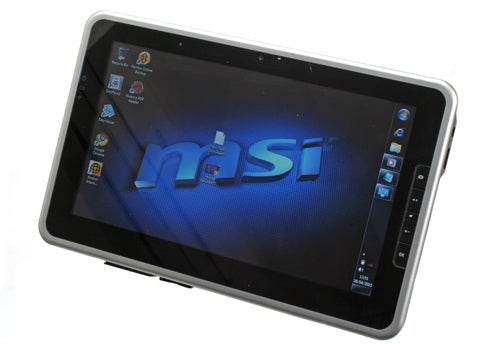 The WindPad’s processor is one of Intel’s Atoms –
specifically the single-core, 1.6GHz Z530. This CPU is quite simply not up to
providing a smooth Windows experience for any but the lightest workloads, and as
soon as you have a few windows open you’ll start to notice lag. To be fair
though, if all you’re doing is working on a word document while browsing the
web and checking your emails, everything will run just fine.

Graphics are handled by Intel’s integrated GMA500 solution,
meaning that even where the CPU can cope, all but the least demanding 3D games
will be unplayable. On the other hand, when using compatible media players the
GMA500 does allow silky 1080p video and Flash video playback, with the latter being
a tangible advantage over Apple’s iPad and iPad2. 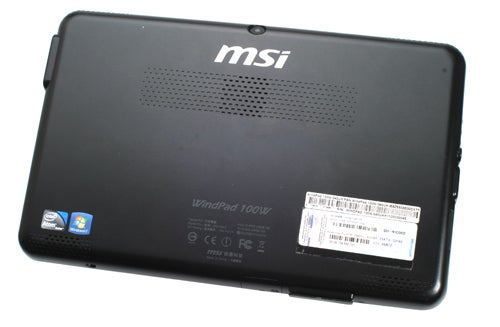 Thankfully, MSI has backed its somewhat underpowered CPU choice
with 2GB of DDR2 memory (far more than most netbooks, with even the recent Toshiba NB550d only offering 1GB) and a generous 32GB SSD. Just keep in mind
that Windows will use a lot more of it than Android would, leaving you with
less usable space (around 13GB).

Another positive difference to the average netbook is that
MSI provides a full version of Windows 7 Home Premium 32-bit, rather than the
Starter edition. On the wireless front it
offers both Wi-Fi N and Bluetooth 2.1. There’s a SIM card slot suggesting the
presence of 3G, but actually the tablet doesn’t have a 3G module and – as we
discovered the hard way – putting a card in this slot will result in it falling
into the WindPad’s innards (at least we discovered it’s quite easy to prize the WindPad 100W apart and get to its guts). It would be nice if MSI put a little warning
sticker on this slot for those too impatient to read through the manual.

Other touches that set this device above your average
netbook are a brightness sensor which controls screen brightness automatically
depending on ambient light, and dual 1.3 megapixel webcams (one at the front
and one at the back) for video calling and augmented reality applications.

Connectivity is also quite good. On the tablet’s left we
have audio and video outputs in the shape of a 3.5mm headphone jack and mini
HDMI connector, which should (in theory, at least) let you output 1,080p to an
external display. There’s also a full-size SD card reader, which offers cheaper
expandable memory than the Micro-SD slots on many tablets, and will let you
plug your camera’s cards directly into the device.

In a nice touch, MSI has included physical Wi-Fi and
Bluetooth buttons, which join the slightly recessed power button at the
device’s top. On the right you’ll find a single USB 2.0 port, which lets you
hook up anything from memory sticks to peripherals. These are significant
advantages compared to either iPad, but whether they will be enough to make a
difference will depend on the rest of the WindPad 100W.

Regrettably, we’re back to sub-par when it comes to the MSI
WindPad 100W’s lacklustre 10.1in screen. Its main problem is abysmal viewing angles, resulting in massive colour and contrast shift when viewed from anything but the exact right angle. This is a
problem that’s bad enough on a laptop but lethal on a tablet, especially one
without any kind of stand.

None of this is helped by a reflective screen finish that
makes the tablet difficult to use in sunlight or strong ambient light, though
again this is a failing common to many of its siblings. In ideal situations the 100W produces crisp, saturated images
with decent contrast but these scenarios are far too few and far between. 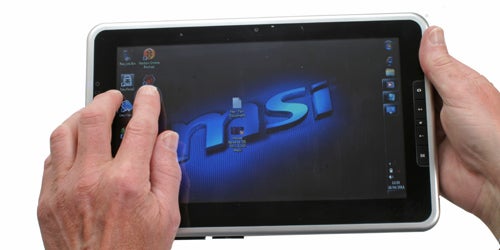 At least the capacitive touch layer is very responsive, and
usually even the lightest touch will be accurately recorded. This is absolutely
essential as using touch to navigate your way through Windows can be tricky at
the best of times. Multi-touch gestures like pinch-to-zoom are of course
supported, and for browsing photos MSI provides EasyViewer, a rather
attractively presented touch interface that works very well indeed. However,
it’s just one application out of many which are not touch optimised.

We also really like MSI’s addition of a physical Enter
button (marked OK) in the selection of controls to the right of the screen, yet
can’t help but wish a custom key and some form of cursor keys/D-pad had been
included rather than the volume controls and camera shutter button (which would
have been better off on the tablet’s sides). 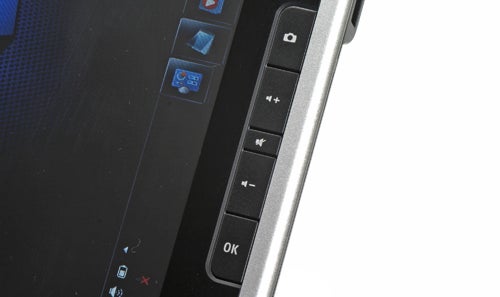 One significant advantage over many alternatives is that you can plug in any USB or Bluetooth mouse and keyboard
combination for desktop-like ergonomics. The screen’s weakness can also be combated
by plugging in an external monitor.

On the audio front, meanwhile, MSI’s tablet performs pretty
much as you would expect. Its tiny stereo speakers fire out the back rather
than the front (which would have made more sense) but at least manage an
audible volume level without distortion. They’re alright for an episode of
Friends or some YouTube, but for anything more serious we would definitely
recommend using headphones. 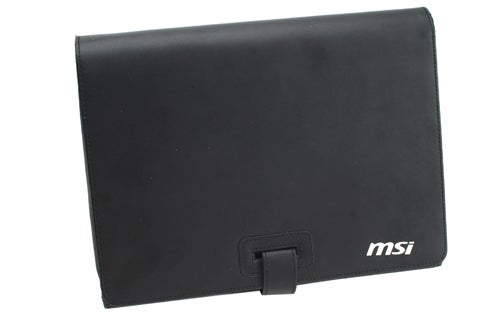 On the topic of noise, even when under light load the
WindPad’s fan spins up to create an annoying hum, which can be quite
distracting when trying to watch a video or game when using the tablet’s own
audio. Another annoyance worth mentioning is the random orientation changes
which occur when you leave the tablet lying in a stable position – not exactly
a sign of quality.

When it comes to life away from a socket for the WindPad
100W, we were very worried when we saw the two-cell rating on MSI’s official
specifications page. However, the actual battery unit is a 4,200mAh model which
kept the tablet running for a solid five and a half hours in our looped video
test with wireless radios turned off and screen brightness at 50 percent.
That’s reasonably impressive for a tablet with netbook-like specifications.

Overall then, the Windpad 100W would be a decent enough
Windows tablet if its price undercut rivals and alternatives to make up for its
cheap design, average performance and poor screen. Unfortunately, it doesn’t,
with the standard retail price at the £500 mark, and the cheapest we could find
it for being £470.

That’s a full £70 more than the Apple iPad2, which might not come close on connectivity but will make a markedly
better casual tablet that’s thinner, lighter, faster, better-built, has more
than double the battery life, a far better screen and is just plain sexier. 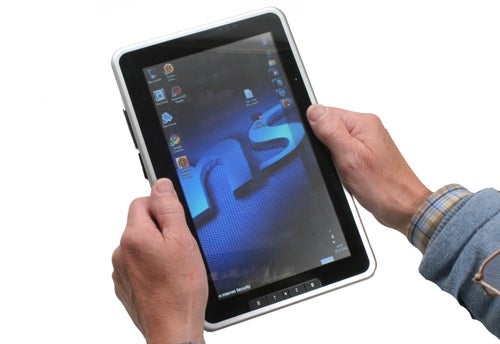 But what about those who want Flash video, or who need the
extra connectivity and more of a focus on productivity? Well, you might find
that something like the impressive Android-based Asus Eee Pad Transformer is adequate for your needs. It beats the MSI tablet
in all the same areas as the iPad, offers HDMI-out and expandable storage, and
for its lowly £450 price throws in a keyboard dock (extending its battery life
to 16 hours).

That only leaves those who truly need a Windows 7 tablet,
which we would reckon are very few. If a netbook like the classy, £300
NB550d really won’t do you, you don’t want the extra weight of a convertible
like the currently £450 Acer Aspire 1825PTZ and you can’t afford a good Windows 7 tablet like the £999
Asus EP121, it may just about be worth considering MSI’s entrant.  For everyone else, steer clear.

In terms of specifications and connectivity the MSI WindPad
100W actually offers reasonable value. It’s just a pity that it’s all contained
in one of the least attractive tablet chassis we’ve come across, with a look
and feel that’s more reminiscent of a device costing £100 than one that will
set you back nearly half a grand. Since it also shows off its capabilities on
one of the worst screens we’ve seen, there’s little reason to pick this tablet
over alternatives.