Just like Asus’ competing Eee PC or Samsung’s N-series netbooks, MSI’s Wind range can be relied upon to receive regular refreshes. After a while, one netbook can start to feel much like the next, but to be fair, newer models usually offer some kind of improvement: whether it’s better battery life, a more recent OS or slightly faster processor. However, with its new Wind U160, MSI is bringing some more fundamental changes compared to the U115 we looked at last year, including a rather dramatic design overhaul. Let’s find out how it holds up. 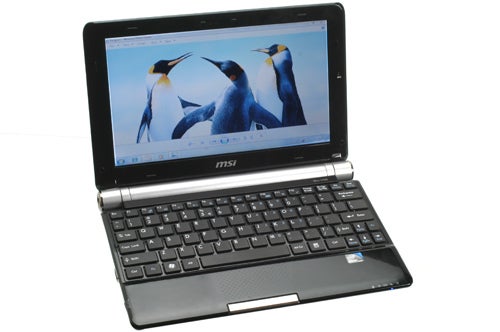 Unfortunately, on the component side there’s little to get excited about, and the specification list reads almost identically to that of most other current 10.1in netbooks, including a sub 720p 1,024 x 600 screen resolution. Intel’s N450 Atom processor runs at nearly the same clock speed as the older N270 but uses a slightly faster and more energy efficient architecture, also integrating Intel’s basic GMA 3150 graphics chip onto the CPU die. This will do a fine job of 2D video and can cope with 720p HD video acceleration, but Full HD/1080p will usually leave it struggling and 3D gaming is completely out of the question.


It’s backed up by 1GB of RAM, which is just barely enough for Windows 7 Starter edition to work smoothly. You can upgrade this by removing a simple hatch at the netbook’s base, but as there’s only one slot you’ll need to chuck the old stick. There’s also a 250GB hard drive for storage, which is the standard size for a netbook these days. Wireless-N Wi-Fi and Bluetooth 2.1 are on-board, though Ethernet is of the non-Gigabit variety. A webcam and microphone complete the feature count.

Connectivity is also as expected, comprising three USB 2.0 ports, an analogue VGA video output, headphone and microphone jacks and a memory card reader. One nice touch is a physical Wi-Fi switch, a good way to quickly save power when it’s not needed.


Design is where the Wind U160 takes a bold step away from its predecessor. It now looks like the bastard offspring of an Asus Eee PC 1005PE and a Sony VAIO Z Series, which is no bad thing. The prominent, rounded silver hinge with its chromed edges and blue-backlit power button is this netbook’s design focal point, with the rest of it adorned in glossy black or “fancy gold”, according to your taste.


However, while attractive and solid, the new design is not all good news. Unfortunately, the aforementioned fingerprint-loving gloss extends not only to the screen but also the palm rests, making this a higher-maintenance machine than its matt predecessors. 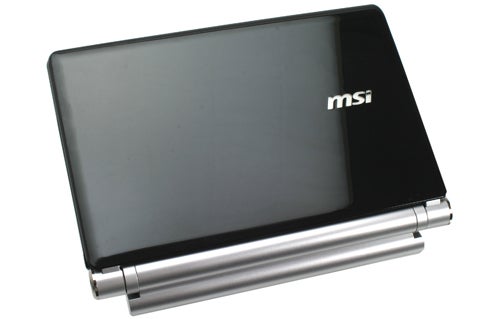 At least the screen’s glossy coating increases perceived contrast, giving colour that extra little bit of pop. Though you won’t get much dark detailing, black looks black and horizontal viewing angles are surprisingly good, with text coming across nice and sharp.


Much the same can be said of the speakers, which while not up to the best of the competition do a respectable job by netbook standards, producing relatively audible volume levels with decent clarity despite their inevitable lack of bass.

Unless you go for the optional three-cell battery, the six-cell that’s sold with the Wind U160 as standard increases the netbook’s weight from the advertised 1.0kg to just over 1.2kg and extends out from the base, tilting the machine noticeably. This makes it easier to balance on your lap and optimizes airflow along the netbook’s base, but makes it difficult to fit in slipcases and bag compartments.


Nor are we happy with its effect on typing. While a lot of people find a sloped keyboard more comfortable, there is a sound ergonomic reason why desktop keyboards these days are usually flat or even slope up at the front rather than the back: it’s less strain for your hands and wrists. 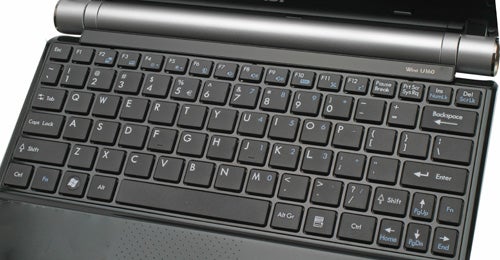 In most other regards the springy isolation/chiclet keyboard is quite good, despite small right-shift and Enter keys. We especially like the addition of a second Fn key, so that secondary functions can always be accessed one-handed. Depending on how you hold your hands when you type, however, there can be one major problem: because of the touchpad’s angle and its large, central position, it’s far too easy to accidentally slide your thumbs or palms across it, making the cursor jump erratically.


At least the touchpad’s large size gives you plenty of room to play with, and its integration is subtle. However, it lacks multi-touch (which many competitors offer), and we aren’t overly fond of its dotted texture either, which after a while can become irritating. Its buttons are integrated into a single rocker switch and offer good feedback. 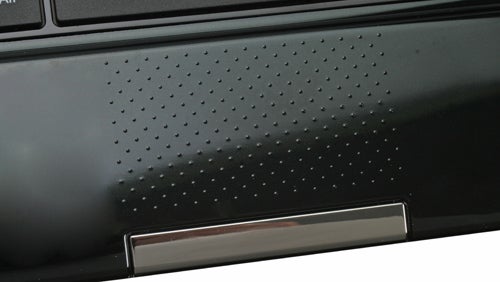 With the U115 being one of the longest-lasting netbooks of its time, we had high hopes for the U160, but were slightly disappointed. That’s not to say it’s bad, as it managed well over seven hours in our video playback test with the screen at 50% brightness. It’s just that we were expecting a bit more from its 5,800mAh, 65Wh battery, and indeed MSI quotes up to 15 hours of battery life if you use its low-power settings. Of course, with less intense usage and enabling its Eco-mode feature you may get a lot longer out of it than we did, but it’s a good indication. 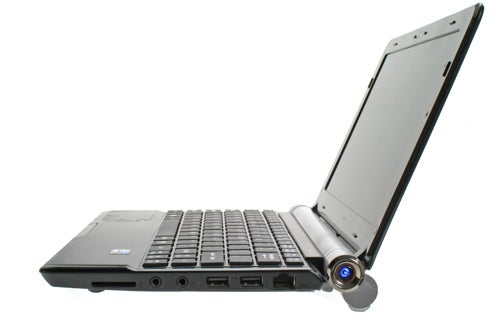 On the value front, even more than the Samsung NB30 (which at least offered some genuine enhancements for its increased price tag), the £315 U160 costs too much for what you get, especially considering its ergonomic flaws. On its own it’s a mostly great little netbook, but the competition at this price point is cut-throat and, despite niceties like a physical wireless switch, MSI doesn’t offer enough to make its latest Wind netbook stand out from the crowd. The better-looking Asus Eee PC 1005PE, to name but one example, can be had for £275 yet performs similarly in most areas.


Visually, the new design of MSI’s Wind netbook is a welcome update, but ergonomically and practically it’s not without downsides. Considering there was already little on offer to differentiate the U160 from the competition and it’s quite expensive to boot, we feel there are better alternatives.