Innovation can be a double-edged sword. While we’ve been frank in our criticism of netbooks for their lack of just that, it’s as much a reflection of the sector and its demands as the strategy of any manufacturer – when you’re trying to make low-cost devices there isn’t a great deal of wiggle room! It’s a problem that’s amply demonstrated by the MSI Wind U115 (U115-025UK), which MSI terms a ‘hybrid netbook’ due to its use of both solid state storage and a mechanical hard drive. This is without doubt an innovation, but it comes at a price.


That price is £450 – yes, you did read that correctly. That, in anyone’s book, is a lot of money for a netbook, but MSI has thrown the book at the U115 where features are concerned. Notwithstanding the hybrid storage element (which we’ll get onto in a moment) the U115 joins a select group of netbooks that use Intel’s GMA 500 graphics chipset. Unlike most netbooks this offers a hardware video decoder for HD video, just provided it’s encoded in MPEG-2, VC-1, WMV9 or AVCHD (h.264) codecs. It’s also very dependent on a software player that supports this hardware decoding, so there are a few hurdles to jump over before you can benefit from this feature. 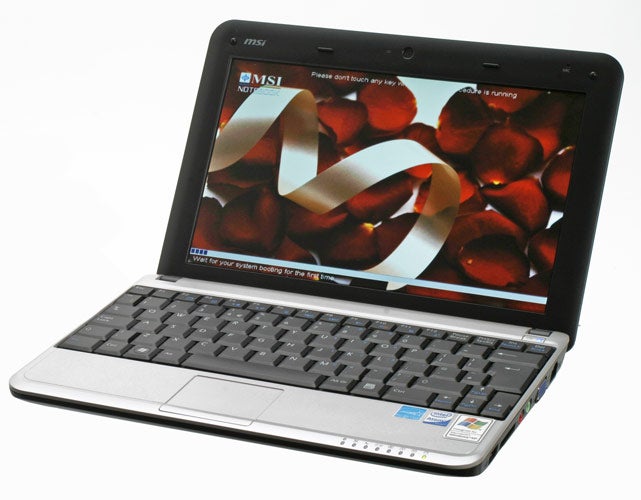 This change of chipset even necessitates a change of processor, though don’t get too excited, since it’s still a 1.6GHz effort, the Intel Atom Z530. This is joined by the usual 1GB of RAM, but Draft-N Wi-Fi and Bluetooth also make the trip – as does a 1.3 megapixel webcam. Also included in the box is a very smart slip-case, among the best we’ve seen with any netbook. It’s a well-padded effort that also features a useful accessories pouch that’s perfect for carrying the power supply, a pen and a notepad.


Clearly it’s the storage configuration that’s the key component, though. In the U115 you get an 8GB internal flash drive, onto which Windows XP is installed. This is then supplemented by a 160GB hard drive for data storage. This means that the mechanical drive, which creates heat and draws more power, is only accessed when you’re looking at data stored on the hard drive. This all has a cumulative effect in improving battery life, something that should be pretty good given the six-cell, 5,200mAh capacity battery supplied. 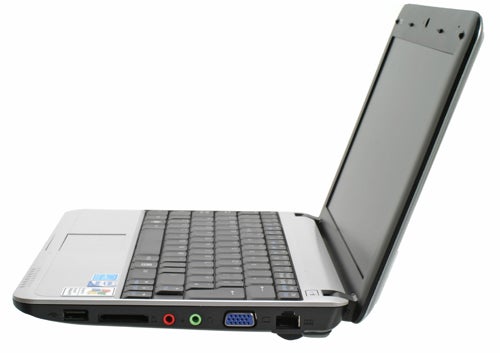 In fact, the U115 is among the best netbooks around where battery life is concerned. During web browsing we managed a projected 10 hours of use, which could be increased further by reducing the screen brightness from 40 per cent (the level at which we tested) to the minimum available. Moreover, an anti-glare finish to the 10in, 1,024 x 600 resolution display ensures it’s easily viewable in normal household lighting at this level, so this needn’t be an irritating compromise. 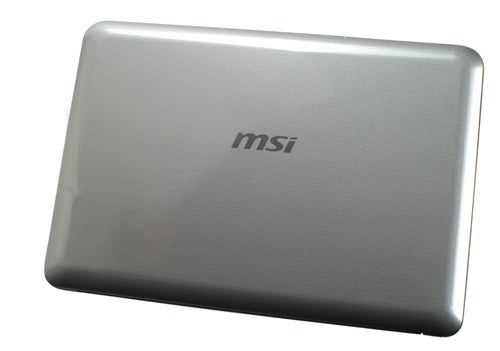 This 10-hour figure is impressive, but our video playback testing demonstrated rather well how effective MSI’s hybrid configuration is. When playing a video from the 160GB ‘data’ drive the U115’s battery life is reduced to around five and a half hours. This is still a decent result, but clearly using the hard drive has a noticeable impact on battery life. More’s the pity manufacturers seem to have turned away from SSD storage on netbooks.

While the hardware differs somewhat from a standard MSI Wind, the chassis doesn’t and it’s actually quite a significant failing. Indeed, looking at the U115 now makes one realise exactly how far netbook design has come in a year or so. Once upon a time the MSI Wind was deemed a cut above, now it’s at best functional and at worst a little ugly. 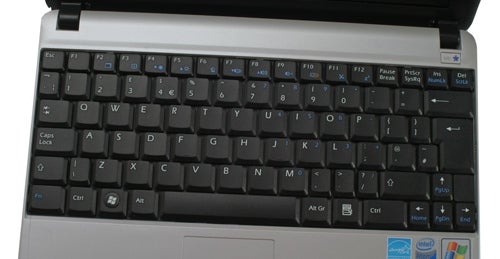 This version is finished largely in silver and black, with a glossy patterned lid the only real attempt at some flair. Sat alongside an Asus Eee PC 1008HA, HP Compaq Mini 700, or even the relatively modest Samsung NC10 and N110, shows the U115 to be a somewhat unattractive and dull looking device. Likewise, though build quality is fair, the U115 feels quite cheap in comparison to any of the above, with some elements proving more pliable than we’d like. 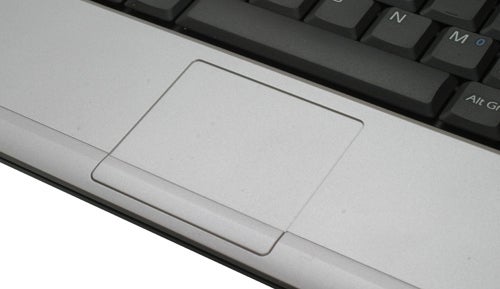 Now all the above wouldn’t be of such great concern were we looking at a bog-standard Wind, one that cost £250 to £300, but the U115 is £450! For that kind of money, extra features or not, we’re looking for something a little more enticing than an anonymous silver and black slab!


It’s not just aesthetically where the U115 is not quite up to scratch, the keyboard and touchpad could also do with some improvement. In fairness, the keyboard is still among the better ones in netbook-land, but its keys are a shade smaller than some and the layout has a few idiosyncrasies. These include the Fn key, which lurks outside the left-Ctrl key, as well as slightly narrower than standard comma and full-stop keys.

Like the keyboard the touchpad remains serviceable, but we’ve never quite understood why it’s square rather rectangular – an aspect that would match the screen – while its buttons feel a little cheap. More worrying, though, is the lack of scroll support, which we can only surmise is due to economising on MSI’s part. Again, such issues might have been tolerable if the U115 were priced like an ordinary netbook, but it’s not.


No real complaint can be made of the U115’s connectivity, though it’s no different to any other netbook. This means three USB ports, a memory card reader, headphone and microphone jacks, a VGA output and an Ethernet port. Another element that hasn’t seen an upgrade are the speakers, which are fairly weedy but just about sufficient for the occasional online video clip.


MSI should be praised for the idea of a hybrid netbook and the battery life results demonstrate that this part of the U115 is a success. However, despite a decent feature set, £450 is far too much to ask for an otherwise uninspiring netbook.