What is the MSI Vortex G25?

The MSI Vortex G25 is one of the smallest desktop PCs I’ve ever seen. Despite that, MSI reckons this compact unit packs enough of a gaming punch to handle today’s top-tier titles with ease.

The G25 weighs just 2.5kg and is 43mm wide and 332m tall. It’s barely bigger than a gaming notebook, and that means it compares very well to its rivals. 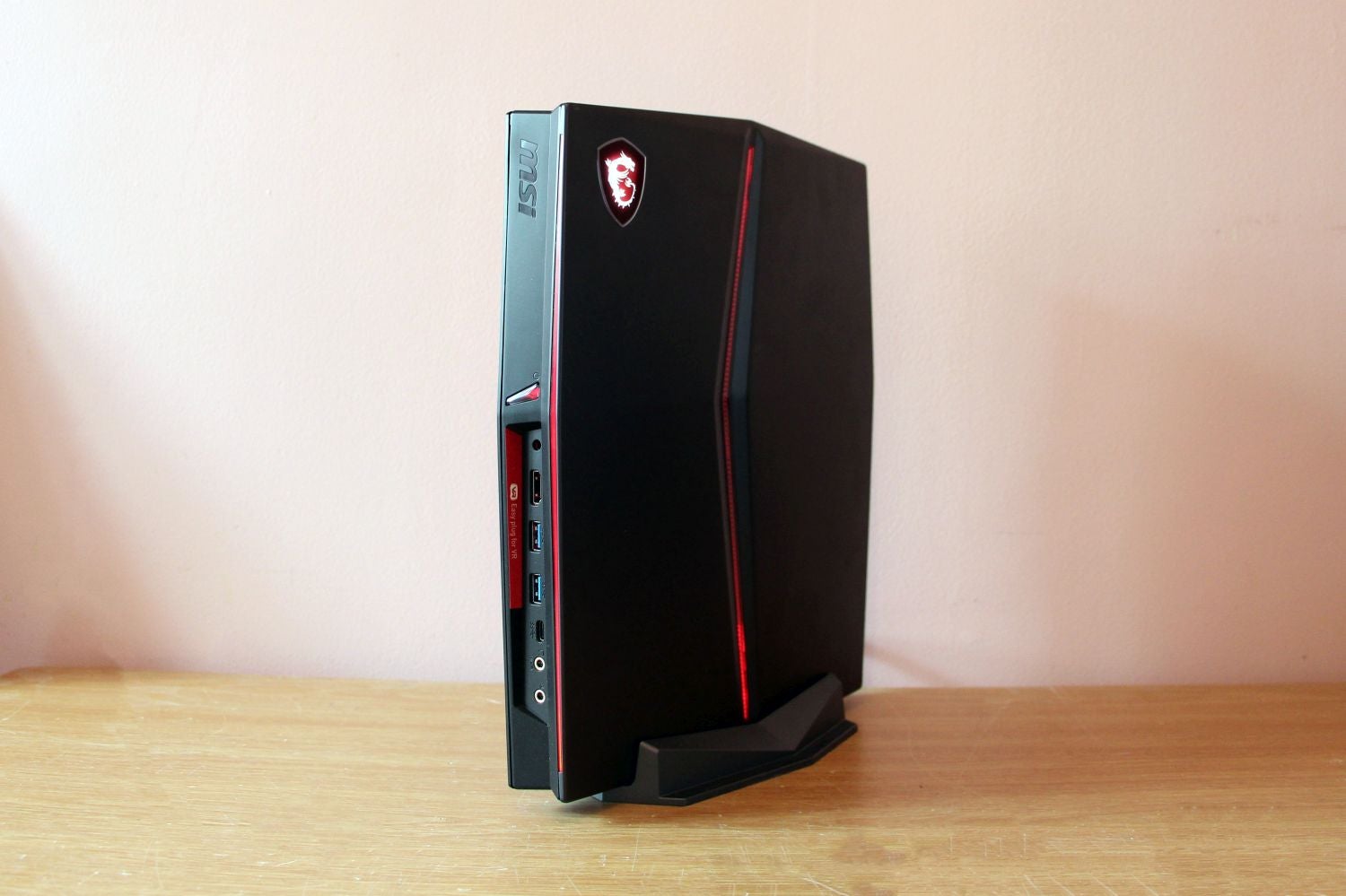 The MSI’s diminutive dimensions make it one of the best options I’ve seen for LAN parties – it’s certainly easy to pack this machine into a backpack. The G25’s exterior is made from plastic and, importantly, it’s sturdy enough to handle being frequently carried around.

The G25 comes with a stand that extends its width to 110mm, but it doesn’t have to be positioned vertically. One side of the machine has rubber feet, allowing it to sit easily beneath a TV. That side panel also has a 100mm VESA mount, so the MSI can be attached to the back of a monitor. And, impressively, that panel can be removed entirely tool-free.

The G25’s versatility doesn’t end there. There are four USB 3.1 ports and a Type-C connector divided between the front and back, and there’s an HDMI port at the front for VR headsets. There’s another HDMI connector and a Thunderbolt port at the rear, and 802.11ac wireless is built-in without any need for external aerials. There’s no DisplayPort, however, and just two audio jacks – a laptop convention that falls behind most desktops. 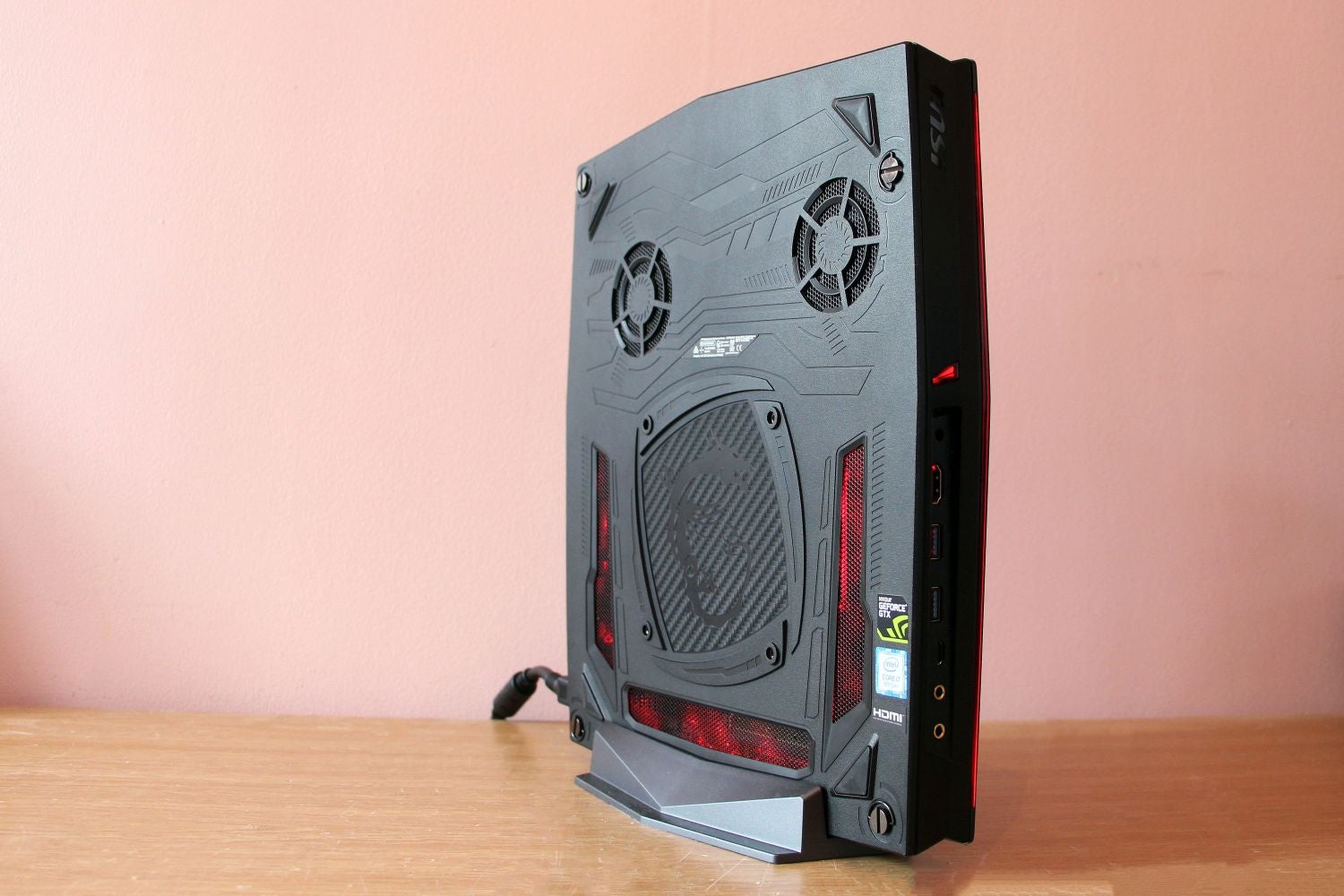 It’s reasonable connectivity, but the MSI’s larger rivals offer more. The Zotac MEK1 has a greater number of audio jacks plus dual Ethernet, while the Asus ROG offers added versatility when it comes to display outputs. The Lenovo Cube, meanwhile, is a proper mini-ITX desktop with a proper graphics card.

As mentioned, the G25’s side panel comes free with the removal of four handy thumbscrews – and taking it off reveals just how MSI has made the unit so tiny.

Instead of using desktop components, MSI has deployed a modified laptop motherboard that uses a mobile graphics chip and a desktop processor. It’s a smart move: Nvidia’s latest mobile chips offer virtually the same amount of pace as desktop cards, and switching to a desktop processor allows MSI to deploy one of Intel’s new Coffee Lake chips that aren’t compromised by mobile designs.

The components are chilled by laptop-style coolers, which have tiny fans, copper heatpipes and exhausts that eject heat through the roof and rear of the system. The processor and memory can be easily reached – handy for replacements – but there’s no upgrade room. 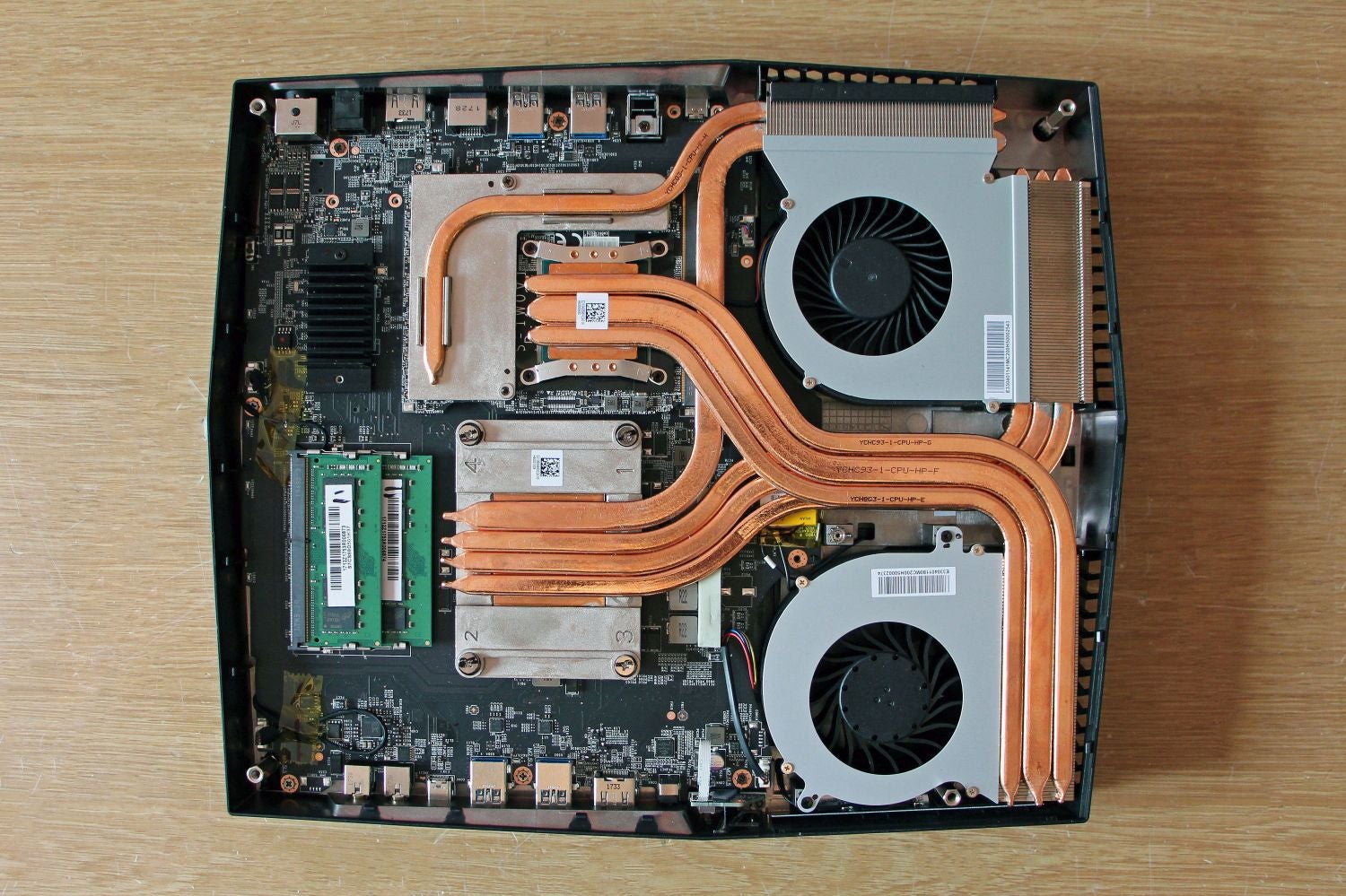 That’s hardly a surprise for such a small machine; neither the Zotac MEK1 or Asus ROG machines have any room to add extra hardware, either. Nor does the Lenovo Cube, despite its larger size.

However, it does lead to further discussion about the size and versatility of the MSI. It’s tiny and light, which makes it easy to take this machine to LAN parties , but the Asus and Zotac machines aren’t exactly hefty – and the Lenovo Cube has a handle. And, importantly, the £1999 MSI is more expensive than all of its rivals.

If you’re only taking these machines to LAN events a couple of times a year, those other rigs won’t prove difficult to move around, especially when compared to an ATX desktop. They’re not only cheaper, they’re housing more powerful components.

The MSI Vortex G25 may be one of the smallest gaming systems I’ve ever seen, then, but in the vast majority of situations I’m not sure that it genuinely needs to be this tiny.

A gaming laptop could prove just as worthy a contender. The MSI Vortex G25 costs £1999, and for that money you can pick up a notebook with the same GTX 1070 graphics core – and, of course, that product will also have a screen, keyboard and touchpad.

The Vortex will have no problem playing games at 1080p. It waltzed through Tomb Raider at 87fps and Middle-earth: Shadow of Mordor at 104fps. It handled those games at 1440p, too, with averages of 63fps and 72fps. All of these scores easily beat the Asus, which makes do with a GTX 1060 3GB card. 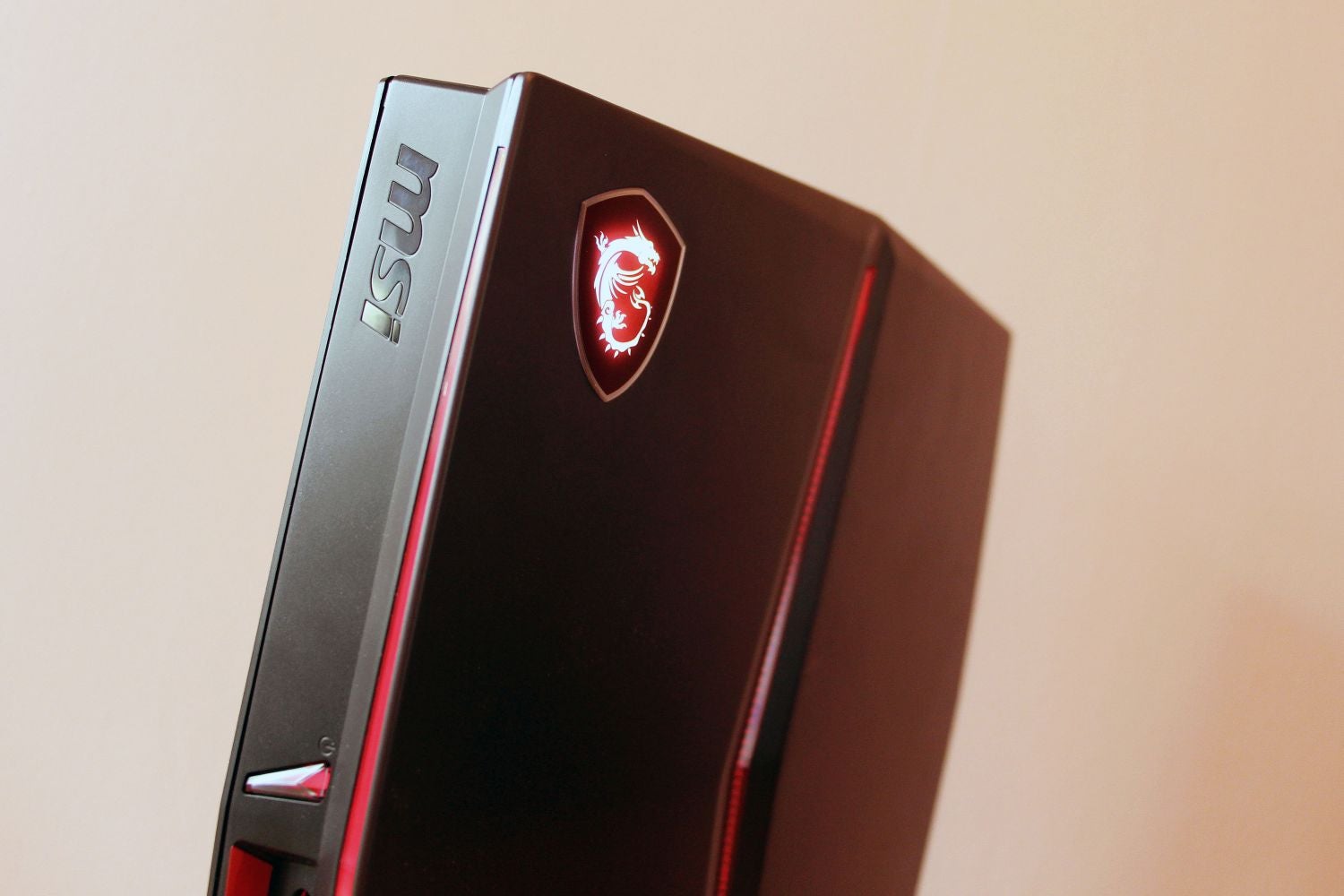 The GTX 1070 is a great card for single-screen gaming, and it has enough power for VR headsets too. It won’t run most games at 4K, though: it handled Tomb Raider and Shadow of Mordor at 34fps and 37fps, but their minimum frame rates dipped below 30fps. Tougher games such as Fallout 4 and Deus Ex saw averages a long way below 30fps, too.

It’s also a little slower than some rival rigs. The Lenovo IdeaCentre Cube served up a GTX 1080, so it was around 30-40 frames quicker in the Tomb Raider and Shadow of Mordor tests.

The MSI’s tight confines mean the processor isn’t overclocked, and the chip chosen here is the i7-8700 – so it isn’t a K-edition chip with increased stock speeds, either. 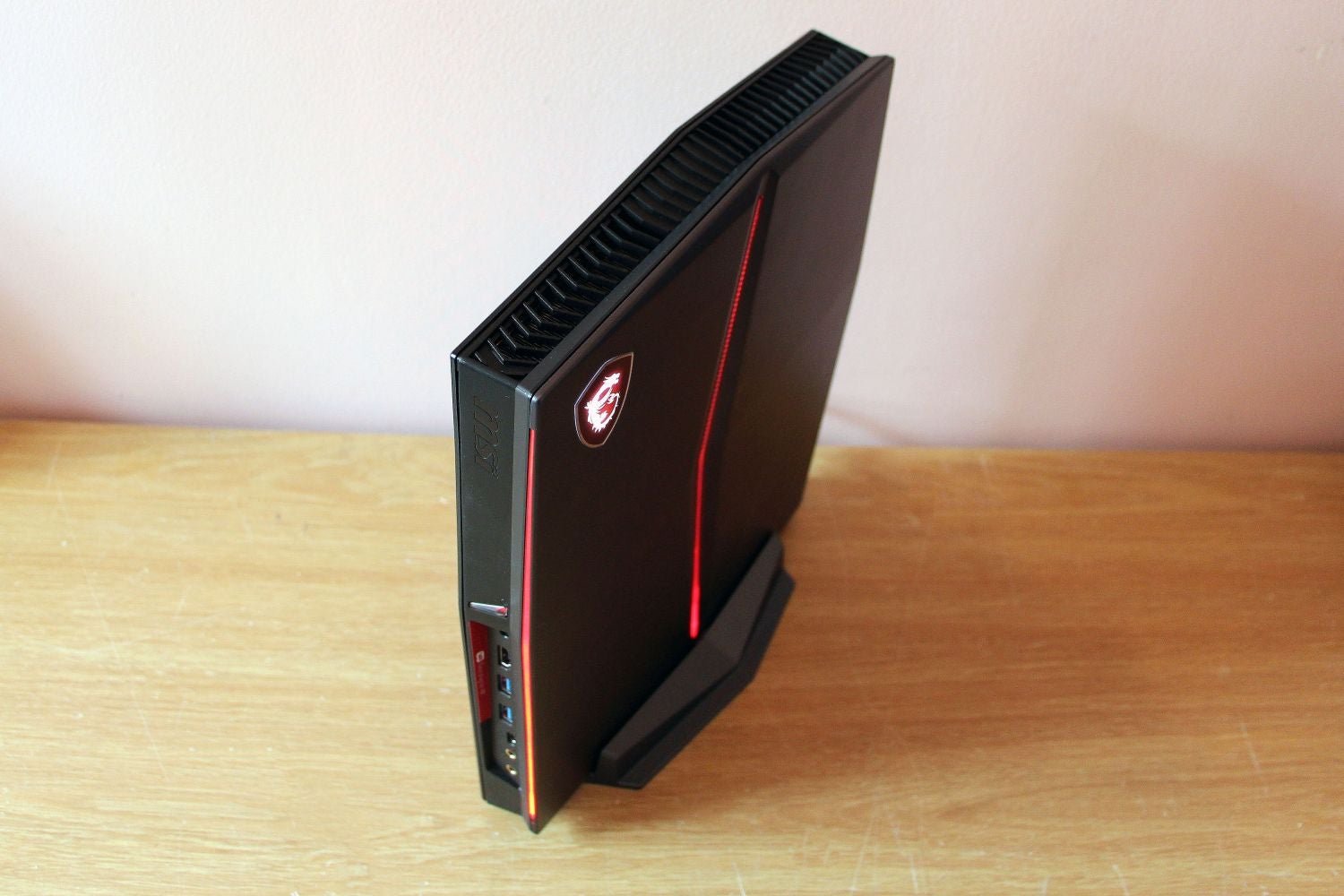 Despite that, there’s still plenty to like. It has six Hyper-Threaded cores, so it won’t have any issues with multi-tasking, and it runs at a solid 3.2GHz. Turbo increases that pace to 4.3GHz on all six cores and 4.6GHz on a single core.

The Core i7-8700 returned scores of 5153 and 21,899 in the single- and multi-core Geekbench tests. The Coffee Lake chip may be a little slower than the K-edition chip, but those results are still excellent.

The single-core score is a few hundred points ahead of the Zotac MEK1’s i7-7700K chip, and it’s also ahead of the Core i5 chip in the Asus machine. The biggest gains come in the multi-tasking test, where the MSI’s score is thousands of points quicker than its rivals. That’s a key indicator of the jump to six cores, and it means that the Vortex will handle any general-purpose computing task, many work applications as well as the latest games.

That’s good news, but in some other tests the MSI was mediocre. The Samsung PM871 SSD is a SATA drive that returned read and write speeds of 545MB/sec and 517MB/sec. That’s better than any hard disk, but NVMe drives such as the home-grown 240GB part inside the Zotac are several times quicker. 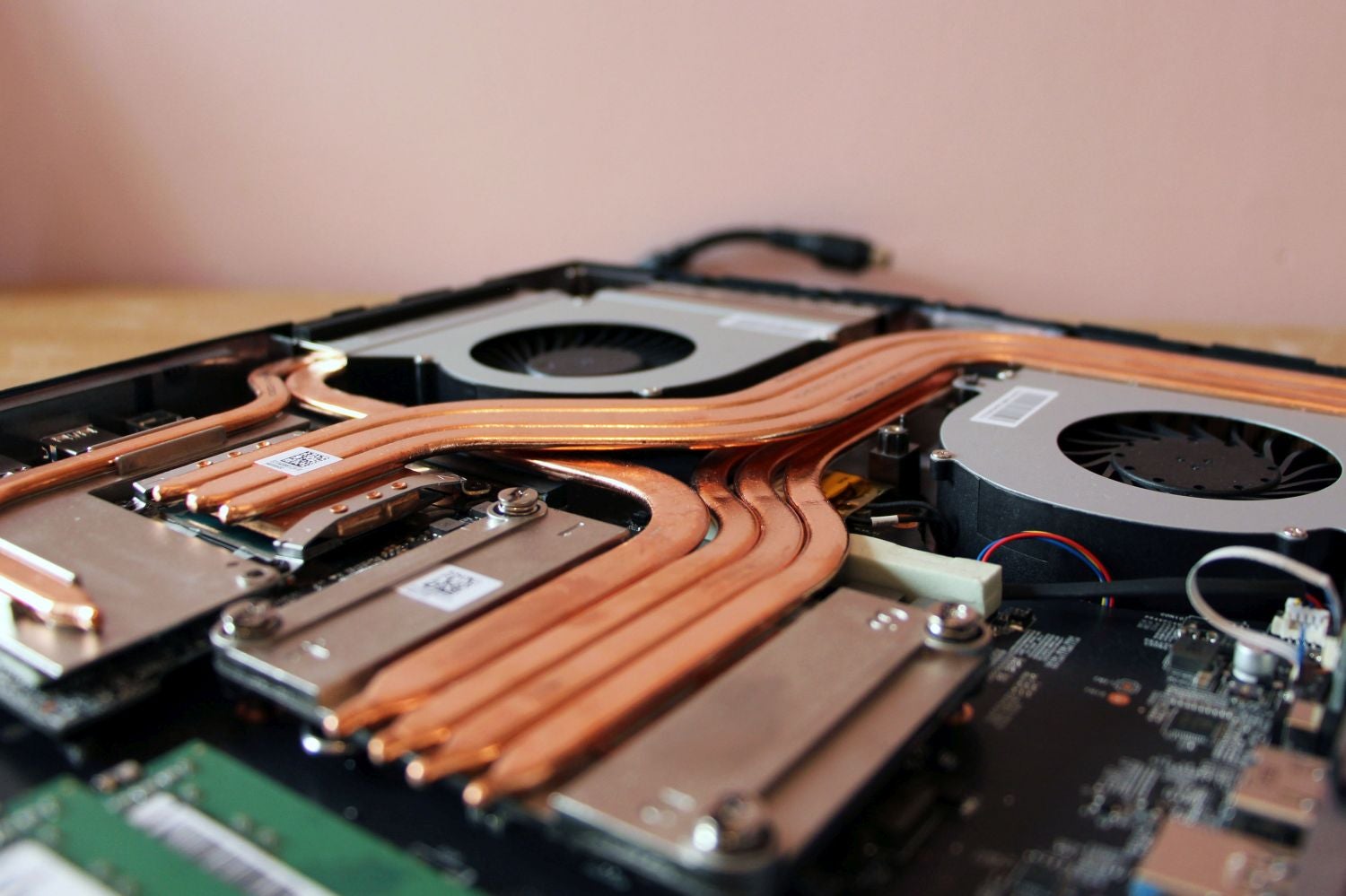 It’s middling in thermal tests, too. The G25 was whisper-quiet when idling and tackling less intensive tasks such as web browsing and office tools, and its peak processor and graphics temperatures of 84°C and 75°C are fine too.

However, tough gaming tests caused the MSI to produce a high-pitched fan noise. It’s similar to the output of most gaming laptops, which isn’t a surprise given the G25’s origins. The noise can be drowned out by a headset or speakers, but it’s still disappointing, especially when this machine’s small size means it could be used discreetly in the living room or on the back of a monitor.

Zotac’s machine is quieter, with a low rumble during even the toughest tests. Lenovo’s Cube system made less noise, too.

Why buy the MSI Vortex G25?

There’s plenty to like about the MSI Vortex G25. It’s the smallest gaming rig I’ve ever seen, and is therefore supremely portable. And, despite its size, the clever mix of desktop processor and mobile graphics delivers enough power to handle almost all gaming and general-purpose tasks.

However, the G25’s tiny dimensions mean it offers less versatility than its rivals, and it’s louder than some of those rigs.

The price, too, is a concern. The G25 costs £1999, while the Zotac MEK1 and Asus ROG machines are hundreds of pounds cheaper – and even the Lenovo, with its GTX 1080, is a little more affordable.

Those machines might be slightly bigger than the G25, but some are faster in games and all are pretty easy to take to LAN parties a couple of times a year. You could also spend this money on a GTX 1070-based laptop.

The MSI Vortex G25 is a worthwhile buy if you really do need the smallest gaming PC that you can possibly find. However, be aware that you’ll have to pay a premium to get this small design, and consider that other such systems will offer better value for money.