The MSI Trident X looks the part, with smart design and RGB LEDs

Incredible speeds and smart design, but it's expensive – and more conventional PCs are more versatile.

What is the MSI Trident X?

The MSI Trident X is one of the most intriguing big-brand gaming PCs that I’ve ever seen. It’s a mini-ITX PC that undercuts most rivals for size, while featuring brand-new, lightning-fast Nvidia and Intel components.

To get your hands on one of these, however, you’ll have to fork out £2900. That’s a hefty chunk of cash, and it brings the MSI into competition with machines that offer more power and features.

The Core i7-9700K is one of Intel’s most powerful new processors. It uses the Coffee Lake-S design, which means the architecture is the same as last year’s Coffee Lake chips. But it also means that Intel has revamped its core counts and improved its clock speeds. 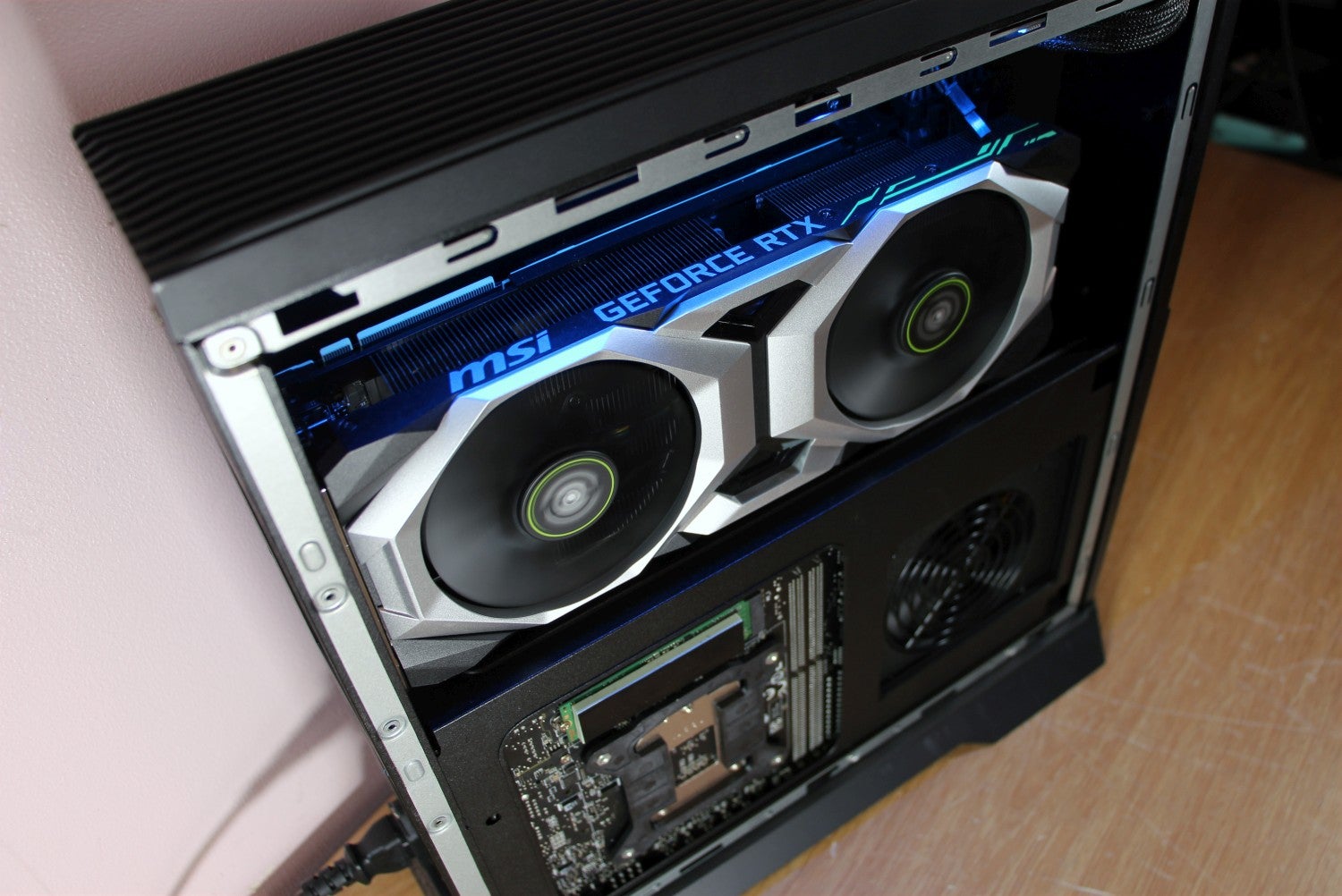 That means the i7-9700K has access to four fewer concurrent threads than its predecessor, but it also has two more native cores. And those native cores are better at multi-tasking than the artificial hyper-threading system. So, the i7-9700K still has ample ability for tough games and high-end productivity apps.

If you want an eight-core chip that does include hyper-threading – which will only really be useful for particularly demanding productivity software, rather than gaming and conventional work tools – then you’ll need the range-topping Core i9-9900K.

The smaller MSI Vortex G25 and the incredible and expensive Corsair One Elite relied on the Core i7-8700 and i7-8700K respectively. The Zotac MEK1 used the Kaby Lake-based i7-7700K.

MSI has paired the brand-new CPU with an Nvidia Turing graphics card. The revised architecture makes significant improvements to integer, floating point and shader performance, and the RTX 2080 inside the MSI serves up 2944 stream processors and 8GB of GDDR6 memory. The MSI-made model in this machine runs at its stock speeds, which means a base clock of 1515MHz and a Boost average of 1710MHz. Despite the different name, the RTX 2080 replaces the GTX 1080 Ti. 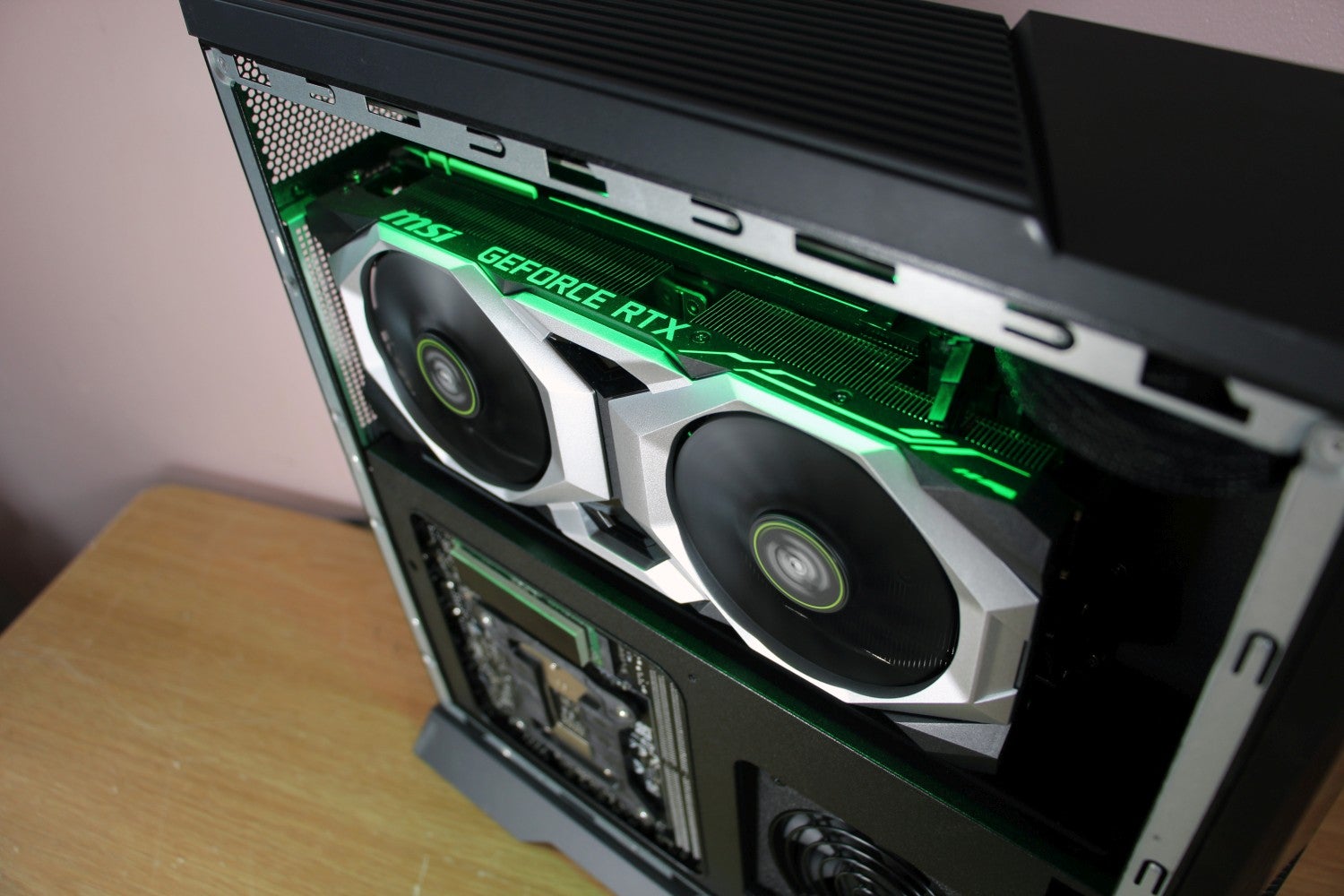 On paper, the RTX 2080 is a beast. However, at the time of writing, Nvidia’s big-name features aren’t working properly. Ray-tracing is still waiting for Microsoft’s delayed Windows 10 update, while super-sampling is still reliant on Nvidia and game developer support that is yet to materialise.

The situation with those headline features means that Turing cards are still a gamble. They’re good performers now and those features will make them better, but there’s currently no telling if they’ll have a huge impact – or if they’ll just become an interesting sideshow.

Despite that, the RTX 2080 will still compete well. The MSI Vortex and Zotac MEK1 machines used the lesser GTX 1070, while the Corsair used the GTX 1080 Ti.

Elsewhere, the MSI has 32GB of memory and a 512GB Samsung PM981. It’s also got a 2TB hard disk. The parts plug in to a modified version of an MSI Z370i Gaming Pro Carbon motherboard. It doesn’t have the RGB LEDs and the big heatsinks of the conventional board. It’s a mini-ITX product, which means it has one PCI-E x16 slot and two memory sockets – and both are already occupied. 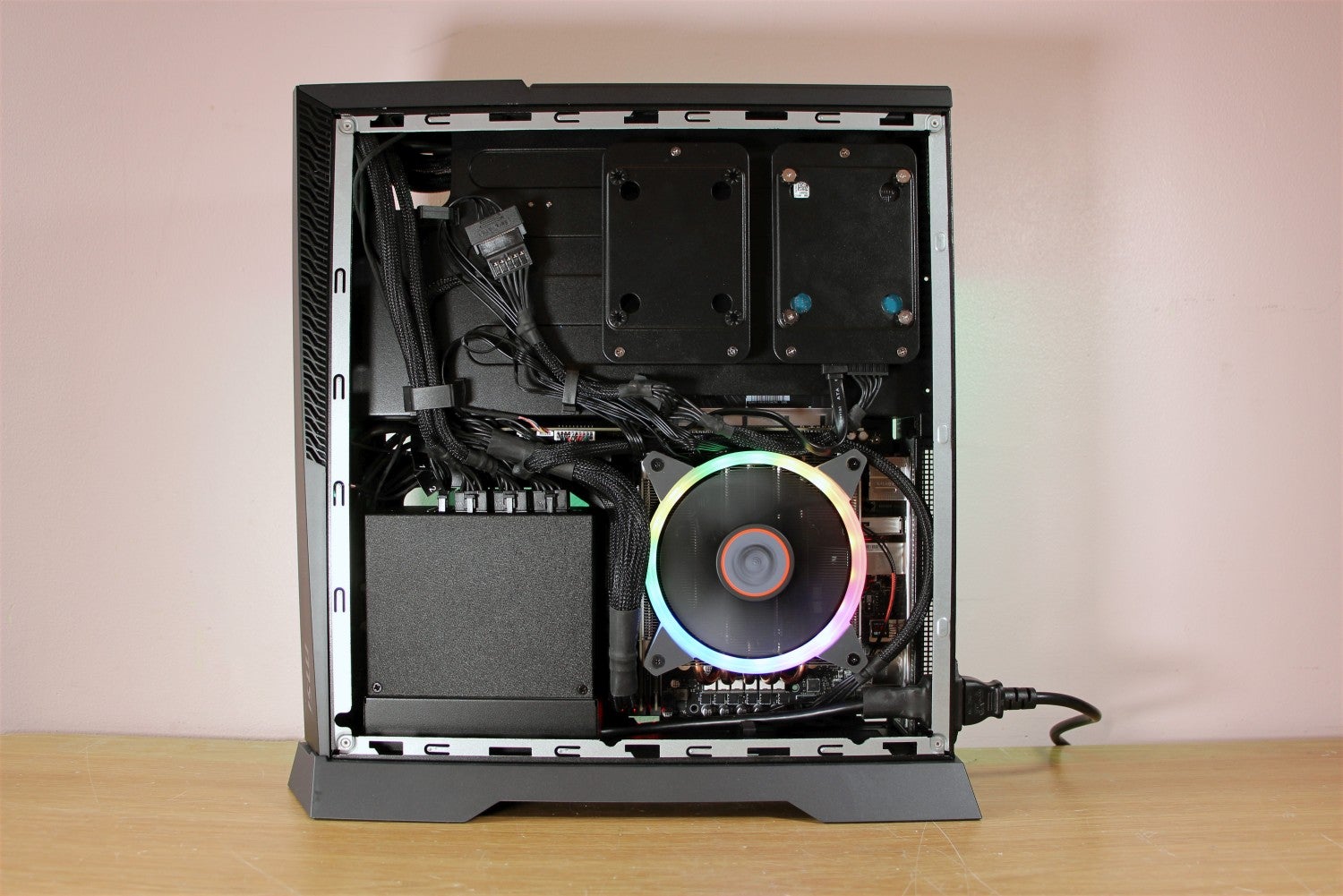 Removing one side panel grants access to most of the components

The board uses the older Z370 chipset rather than the new Z390 variant that’s being introduced with Coffee Lake-S. On paper, that means you lose native support for Wi-Fi and USB 3.1 ports. True to form, the MSI board doesn’t have wireless, but it does have USB 3.1 provided by a third-party chipset. The rear serves up three USB 3.1 ports and a Type-C connector – an entirely normal selection.

The MSI beats its rivals on paper. That’s not surprising, because those machines use older components and haven’t been updated. However, be aware that buying systems from local PC manufacturers will allow you to put together a specification to match the Trident while saving cash.

If you opt for a small system from a company like Chillblast, Scan or PC Specialist, you could bring this specification in for under £2500. If you buy a full-size tower – and get its extra size and space – then you could shave more off that price.

Despite the huge power, the MSI Trident X is surprisingly small. It’s 396mm tall, only 130mm wide, and it weighs 6.5kg – small enough to easily carry to LAN parties.

The MSI Vortex G25 is smaller still, with a weight of 2.5kg – not surprising for a machine based on laptop components. However, the Zotac MEK1 is taller than the Trident X and weighs 8.9kg, and the Corsair One Elite is 7.4kg.

The side panels have meshed sections that show off the interior’s glowing RGB LEDs, and the front has soft, glowing lights, alongside two USB ports and a helpful Type-C connector. 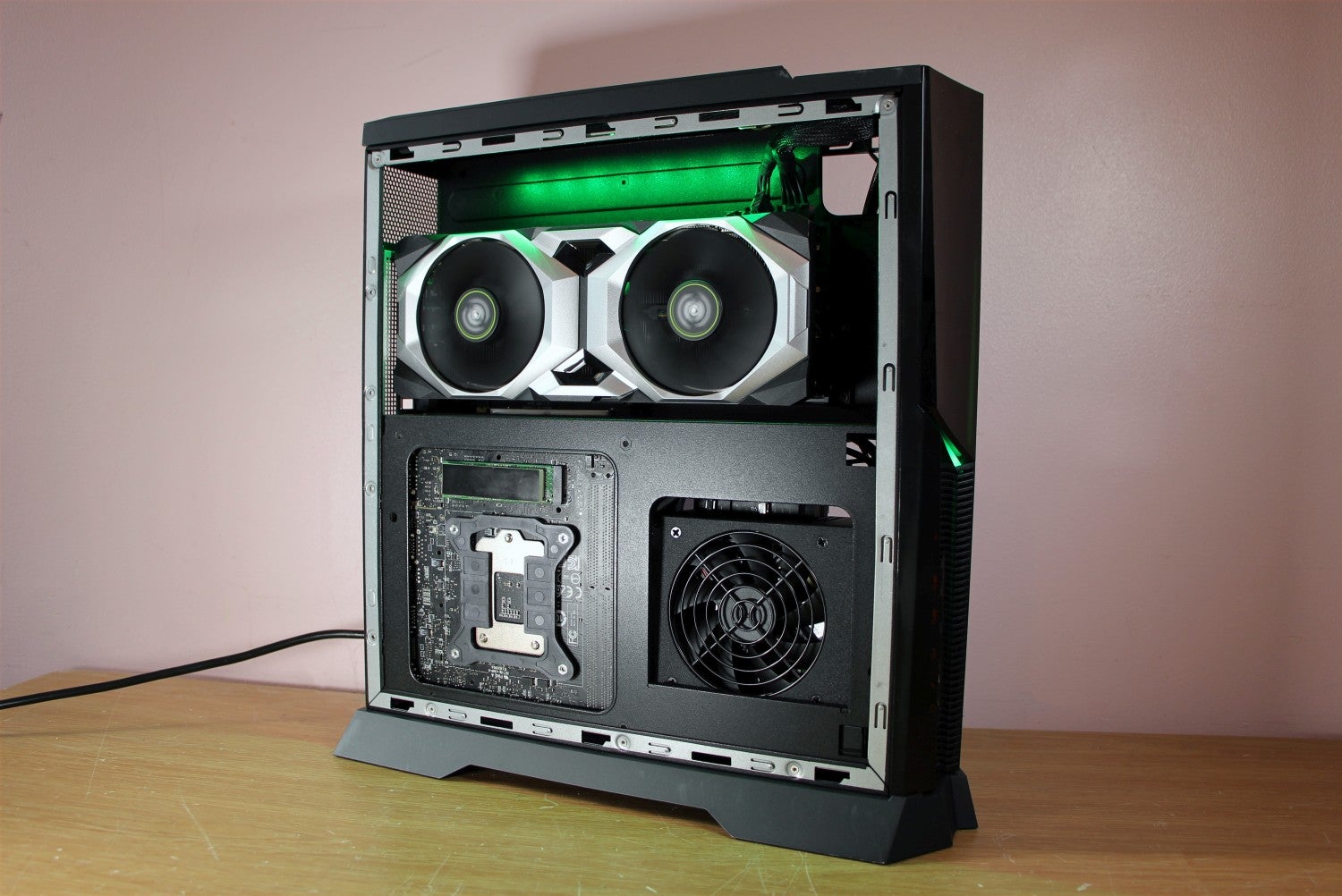 The GPU stretches across the entire width of the PC

One side of the Trident X contains the graphics card, which stretches across the whole machine. Below that you’ll find the SSD, which is attached to the rear of the motherboard.

Behind the other side panel is the motherboard, power supply and storage, and one free 2.5in drive caddy. However, as this is a small PC, the cables run in-between all of the major components. The number of cables and the large 120mm CPU cooler make the motherboard almost impossible to reach. That spare 2.5in drive bay is awkward, too, because MSI hasn’t pre-installed a SATA cable.

None of this is particularly surprising on a mini-ITX machine, but I was taken aback by the Trident’s build quality. The plastic slats at the top of the PC are very flimsy, and the side panels are slim. The tempered glass panel that’s in the box is sturdier, but I’d still be careful when taking this machine out of the house.

That build quality is the only surprise when it comes to the MSI’s design. However, while the Trident X is small and stylish, there’s no denying that conventional desktops offer more. If you want to add storage, fit in a second graphics card or tinker with your PC, you’d be better off with a full-sized tower.

The RTX 2080 trades blows with the GTX 1080 Ti – and so it’s able to handle gaming at 4K, on widescreen panels and on VR headsets.

In Rise of the Tomb Raider the MSI delivered a 4K average frame rate of 65fps, and its minimum result of 34fps is enough to ensure smooth gameplay in frantic scenes. The MSI then returned a 4K average of 84fps in Middle-Earth: Shadow of Mordor.

Those scores are miles better than the GTX 1070 inside the Zotac and the MSI Vortex. Those GPUs handled Rise of the Tomb Raider at 34fps and Shadow of Mordor at 37fps.

The RTX 2080 proved adept with tougher, newer games too. Shadow of the Tomb Raider is brand new, and it supports ray-tracing – even though that feature hasn’t yet been activated. Still, the MSI ran that game at a 46fps average. It was only one frame slower in Deus Ex: Mankind Divided.

The Corsair One, with the GTX 1080 Ti, ran through Rise of the Tomb Raider at 68fps and Shadow of Mordor at 88fps – better scores than the RTX 2080 in admittedly easier games. However, the Corsair was four frames slower in Deus Ex, which is a tougher and more demanding title. 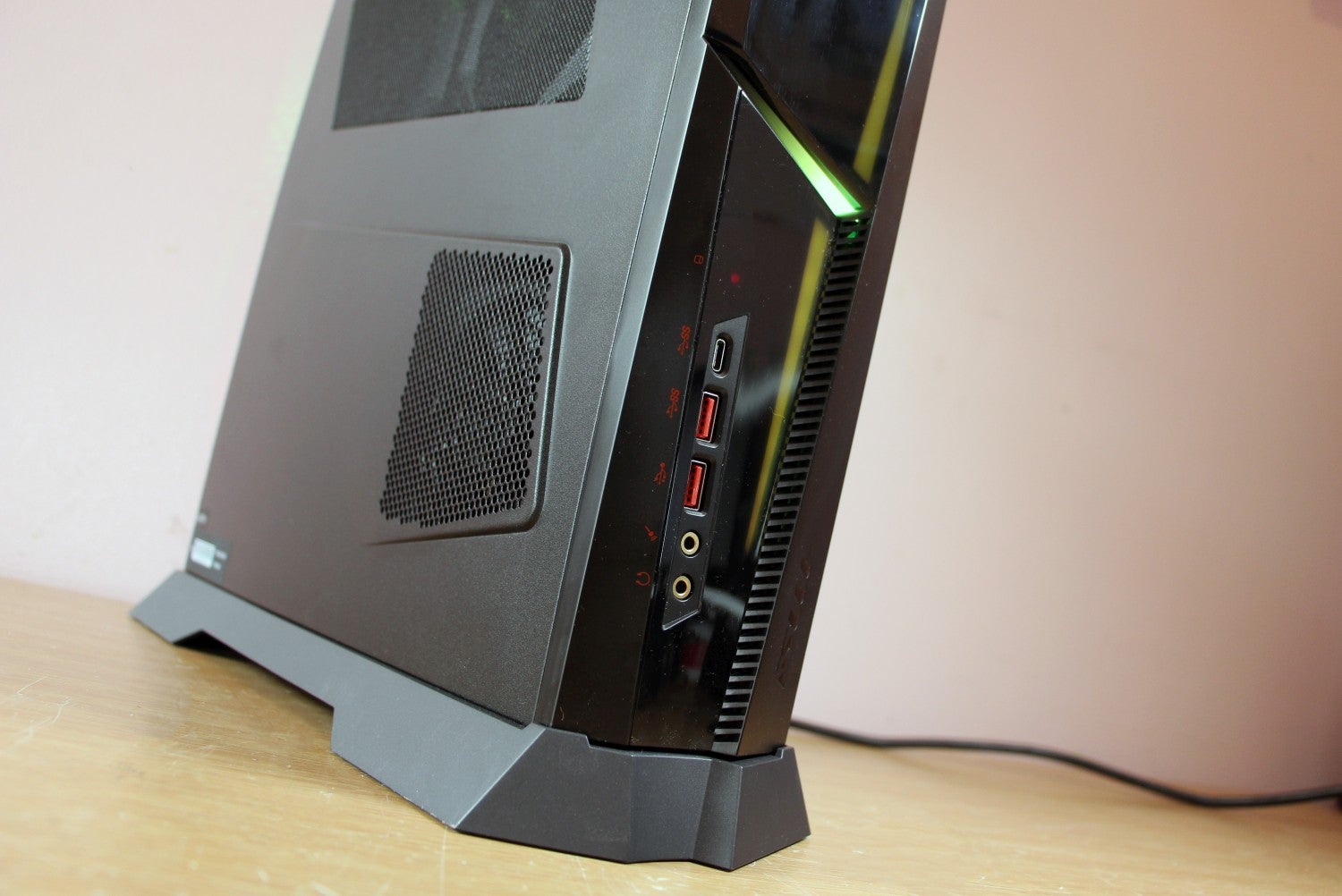 The front of the machine has a USB Type-C port

There’s little to choose between the RTX 2080 and GTX 1080 Ti when it comes to raw performance: both are excellent. However, the RTX 2080 should take a lead in the future – it’ll get more driver updates and optimisations for a longer period of time, and Nvidia’s new features will arrive at some point – and the RTX 2080 will handle them with far more ease than the ageing GTX 1080 Ti. So, while the two cards are close now, the Turing-based GPU should accelerate away from its predecessor as time goes by.

The MSI’s ability was demonstrated in theoretical tests. The Trident’s 3D Mark Fire Strike Ultra result of 6578 is great – nearly 2000 points behind the Zotac and even further ahead of the MSI Vortex. However, it couldn’t beat the Corsair One, which scored 7075.

The Coffee Lake-S processor may not have hyper-threading, but its eight cores and improved Turbo speeds ensure that it doesn’t lose a step when compared with older hardware. The Trident’s i7-9700K scored 5858 and 27,351 in Geekbench’s single and multi-threaded benchmarks.

The former result is one of the best I’ve ever seen, especially from a system with no overclocking. Machines with last year’s Core i7 chips tend to score between 5000 and 5500 points in that test. The latter score is similarly superb. Hardly any consumer machines have beaten it, and even the Alienware Area-51 Threadripper and its sixteen-core CPU was a little slower.

In short, then, the i7-9700K is fantastic. The Turbo improvements deliver great single-threaded pace, which means the Trident won’t bottleneck games and it will handle conventional applications with ease. 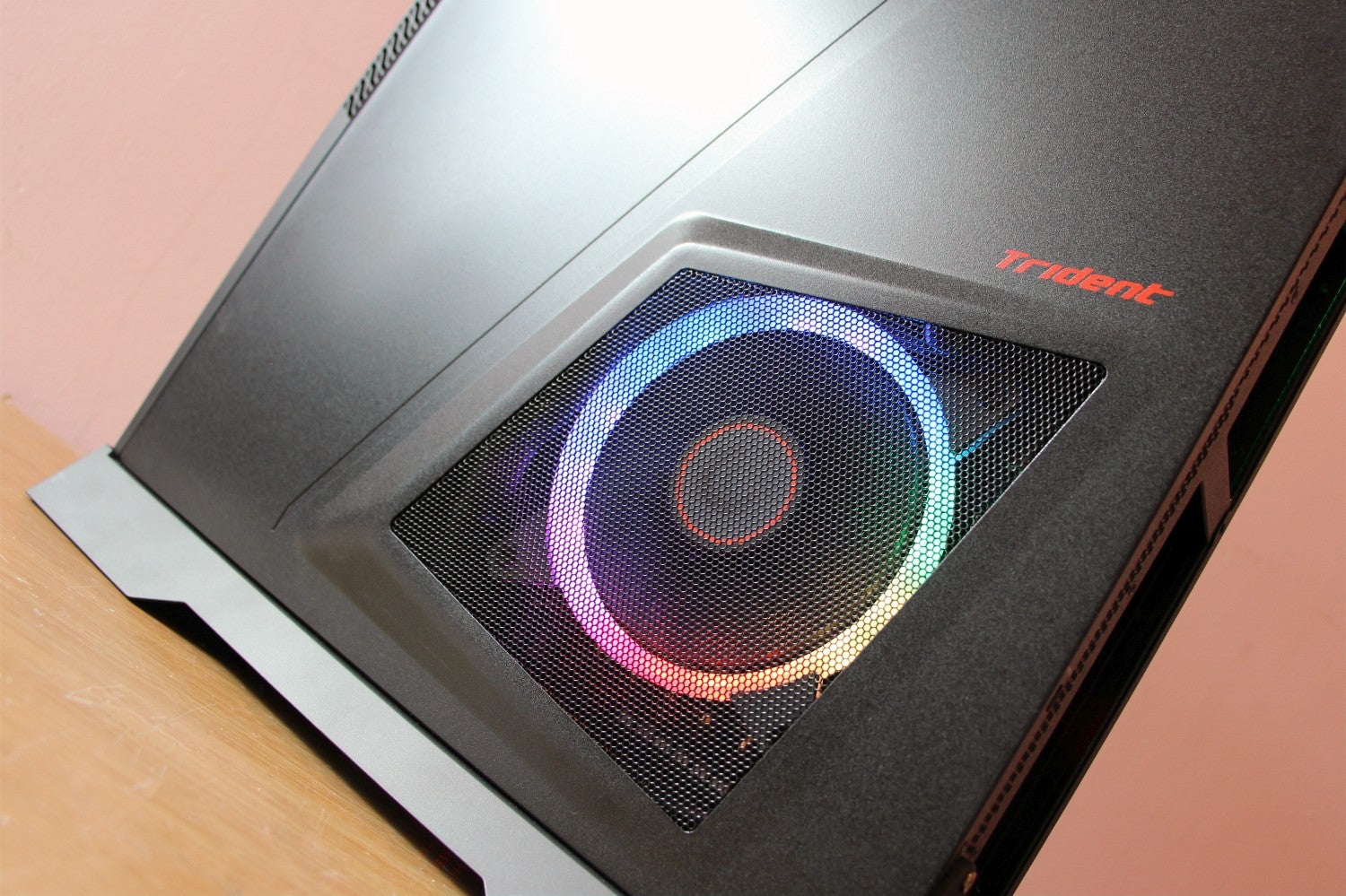 The 120mm CPU cooler is ringed with RGB LEDs

The PC Mark 8 benchmark is another sign of the MSI’s prowess. Its overall result of 5566 points squeaks ahead of the Corsair and is further beyond the 5128 points scored by the MSI Vortex G25. Both of those machines had six-core Coffee Lake chips.

The MSI’s SSD is great, too. It returned read and write scores of 3361MB/s and 1906MB/s – some of the best speeds on the market. Boot speeds are great, and games load quickly.

The MSI delivers fantastic performance and, impressively, it has good thermal abilities. During a gaming stress-test and a full-system test the CPU hit a fine peak temperature of 81 degrees. The graphics card was fourteen degrees cooler.

The CPU and GPU never throttled, and the low rumble emitted by the Trident is no worse than a full-size gaming desktop – a stellar result considering this machine’s size. The small MSI Vortex was louder and whinier, while the Zotac and Corsair PCs were just as quiet as the Trident.

Why buy the MSI Trident X?

The small MSI delivers fantastic power, especially when its size is considered. The new Coffee Lake-S processor improves on older hardware in single and multi-threaded benchmarks, which means better performance in every facet of computing. Impressively, the chip does this without requiring extra electricity and without hyper-threading.

The RTX 2080 compares well with the GTX 1080 Ti and will handle almost any gaming task thanks to its raw power – even if its headline features remain an unknown quantity.

MSI’s machine looks good and is cool and quiet, too. However, it does have its issues: the memory speed is middling, and the motherboard is plain. There are no easy upgrade routes, and the Trident X is expensive compared with its rivals and British-made systems.

If you’re willing to pay that premium, however, the Trident X does cram a vast amount of power inside a small and eye-catching design. Nothing else so small offers this much computing ability.

The MSI Trident X delivers stonking performance in games and applications thanks to its new silicon, but the interior isn’t particularly accessible and the price is a tad high.