Small and almost perfectly formed, this tiny gaming PC packs a 1080p and 1440p punch inside a smart, quiet enclosure.

What is the MSI Trident A?

The MSI Trident A is the brand’s ninth generation of small gaming PC – and this updated model looks more like a console than a gaming system.

The console-style design is paired with a mid-range specification, which means this system lands right in the middle of a busy, competitive market in both the UK and US.

The UK model costs £1249, the equivalent US spec comes in at $1449, so this isn’t a particularly pricey system. That said, can the MSI Trident A compete with well-made local rivals?

MSI Trident A design and build – A tower PC, but not as you know it

The MSI Trident A is 130mm wide, 396mm tall, and weighs in at just 6.6kg. That makes it far smaller than conventional tower PCs; those are usually more than 200mm wide and 500mm tall. Not only does this smaller size allow for placement of the MSI beneath TVs and in smaller bedrooms, it also makes this machine easy to take to LAN parties and gaming events.

The MSI pairs its more compact dimensions with good looks. The front is made from glossy plastic panels that are divided by angled red lights. The top has smart slats to help air leave efficiently, and the machine sits on an angled, flared base. 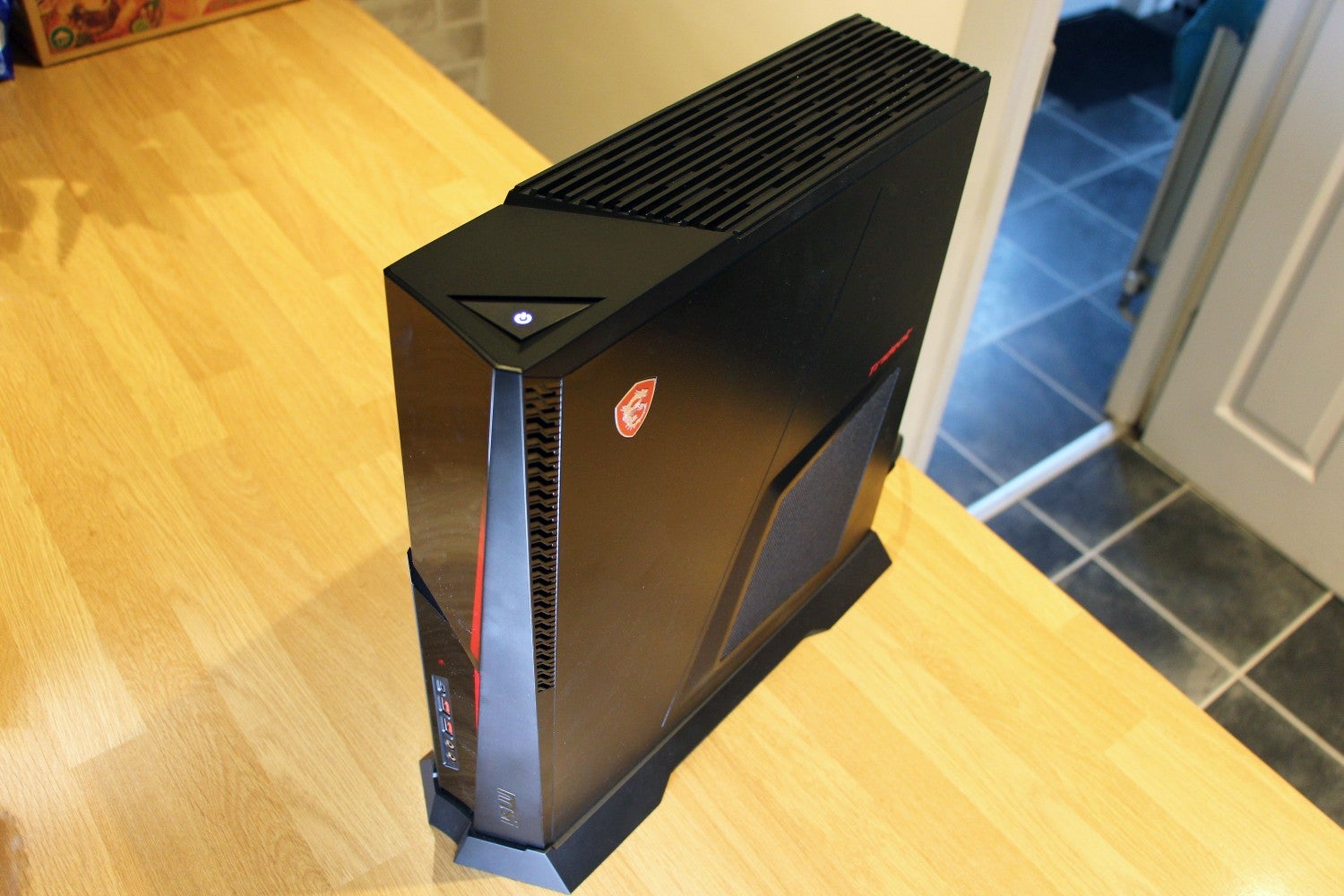 On the front are two full-size USB 3.1 ports and a Type-C port alongside a pair of audio jacks. At the rear, the port selection continues to be reasonable: there are four more USB 3.1 connectors, USB 2 ports, six audio jacks and even a PS/2 connector, but no extra Type-C.

The Trident continues to impress on the inside. Components sit in two sections for neat placement, and to ensure good movement of air.

On one side of the machine you’ll find the motherboard, with the processor and memory, alongside the power supply and storage.

The motherboard and its associated components are installed at the bottom of the case, with the power supply alongside. The board in this rig uses the mini-ITX form factor, so it’s tiny – which means you don’t get any spare memory or PCI sockets. Still, the cabling is neat, so it’s easy to reach the processor, memory or storage if needed.

Above the motherboard are two 2.5in drive bays. One is occupied, the other is vacant, ready for another hard disk or an SSD. 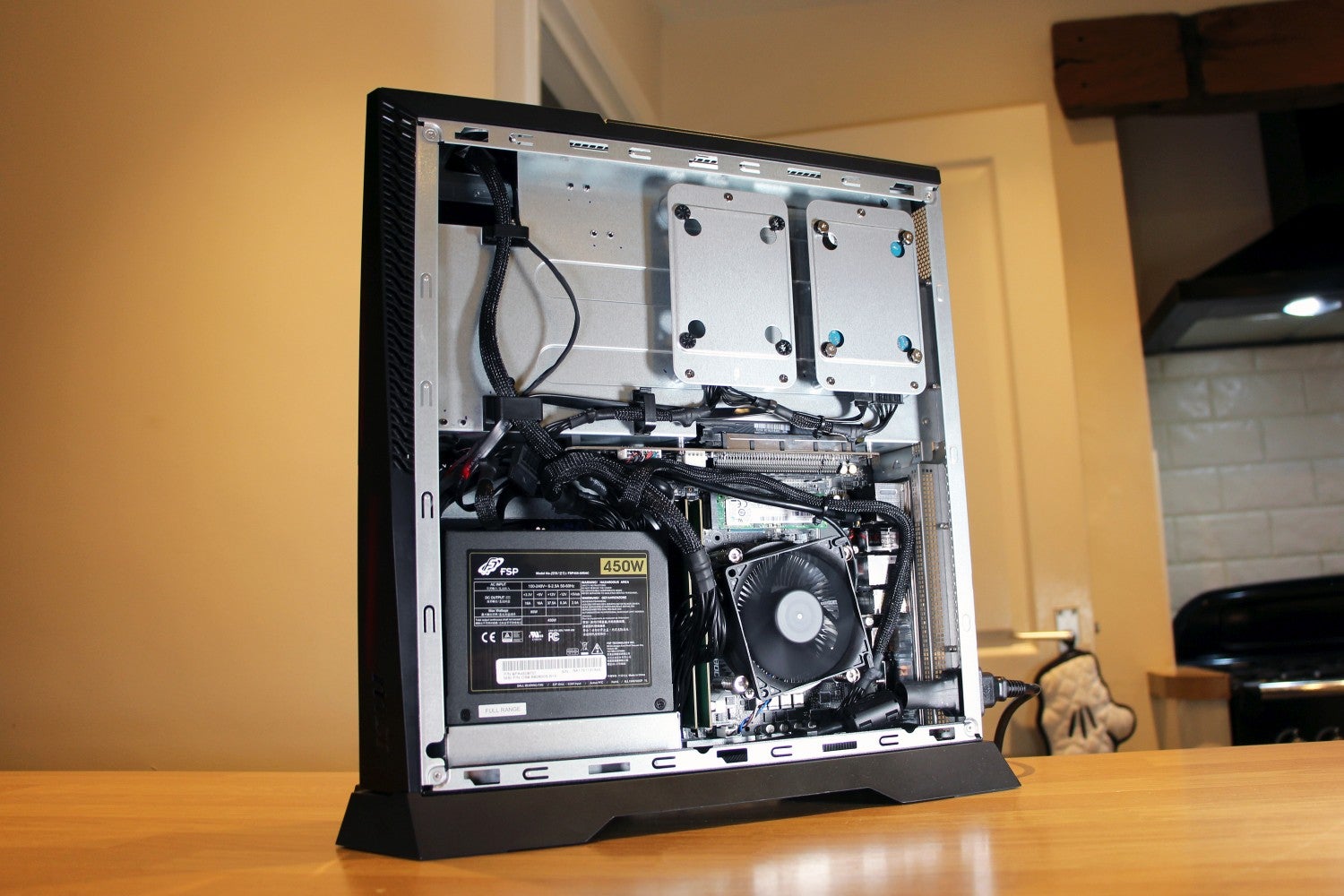 On the other side of the interior you’ll find two areas cut out of the metal: one reveals the back of the motherboard and a spare M.2 connector, while the other allows air to reach the PSU’s intake fan.

Above this you’ll find the cavity that holds the graphics card. The GPU connects to the motherboard with an extension card, and the area used to hold the GPU is long enough to fit a larger card. However, you’ll only really be able to upgrade to an RTX 2060 Super here due to the MSI including only one power connector.

You won’t encounter many of these issues if you opt for a full-size tower, rather than a small machine such as the MSI Trident A. Conventional ATX rigs will have greater storage space, more PCI slots, additional memory sockets and room for beefier graphics upgrades. 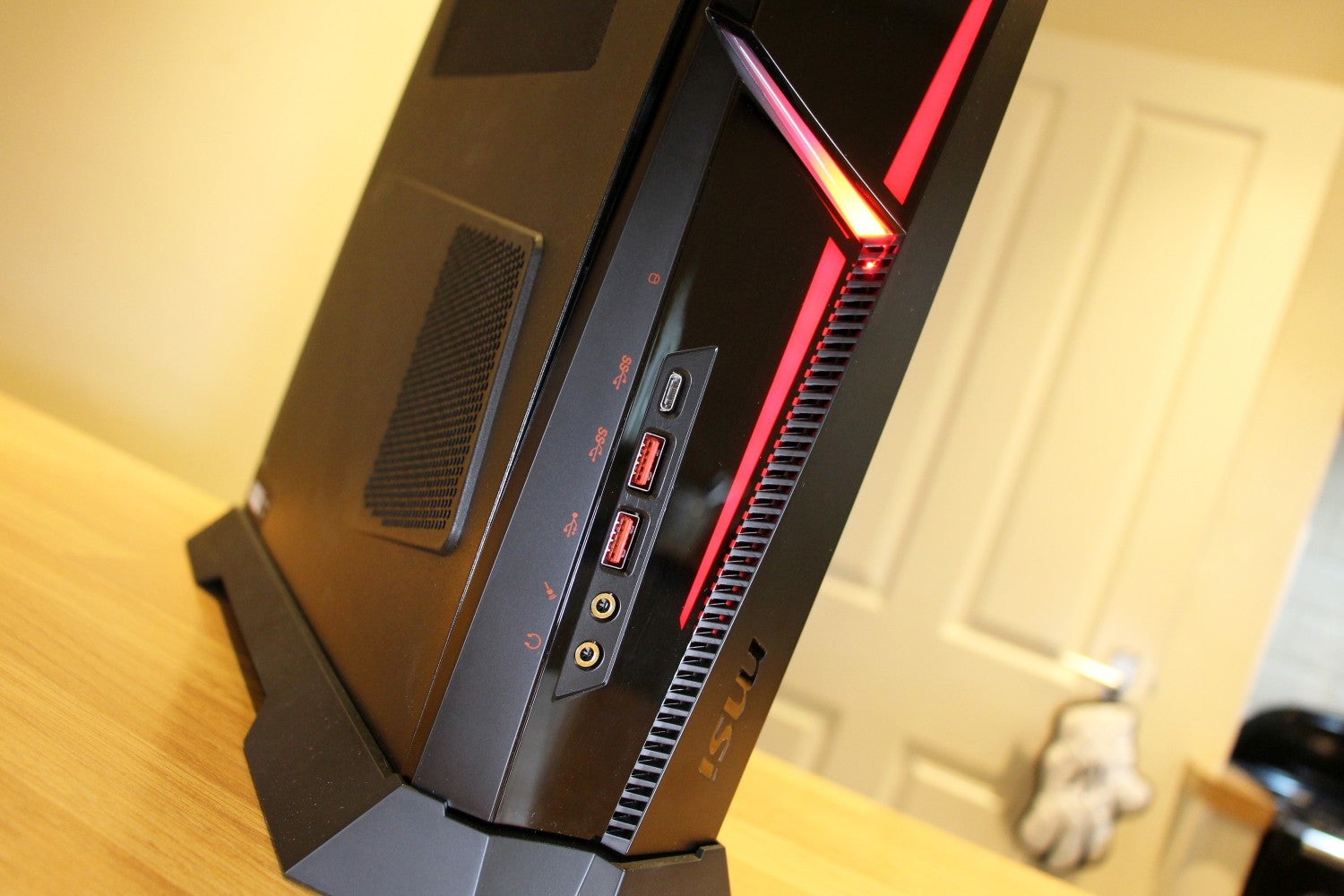 If you’ll want to upgrade in the future, then a full-size tower is worth considering. If you’re not fussed, or if you specifically need a smaller machine, then the mini-ITX MSI makes more sense.

My only design issue concerns build quality. The Trident’s underlying metal skeleton is robust, but the plastic front, roof panels and metal side panels are flimsy. If you’re taking this machine out on the road, expect some scuffs and scratches.

That specification isn’t available in the US; the closest build to this model costs $1499. That rig still comes with the RTX 2060 and 16GB of memory, but its higher price is justified by a Core i7-9700F processor and a 512GB SSD. The part number for that model is 9SC-430US. 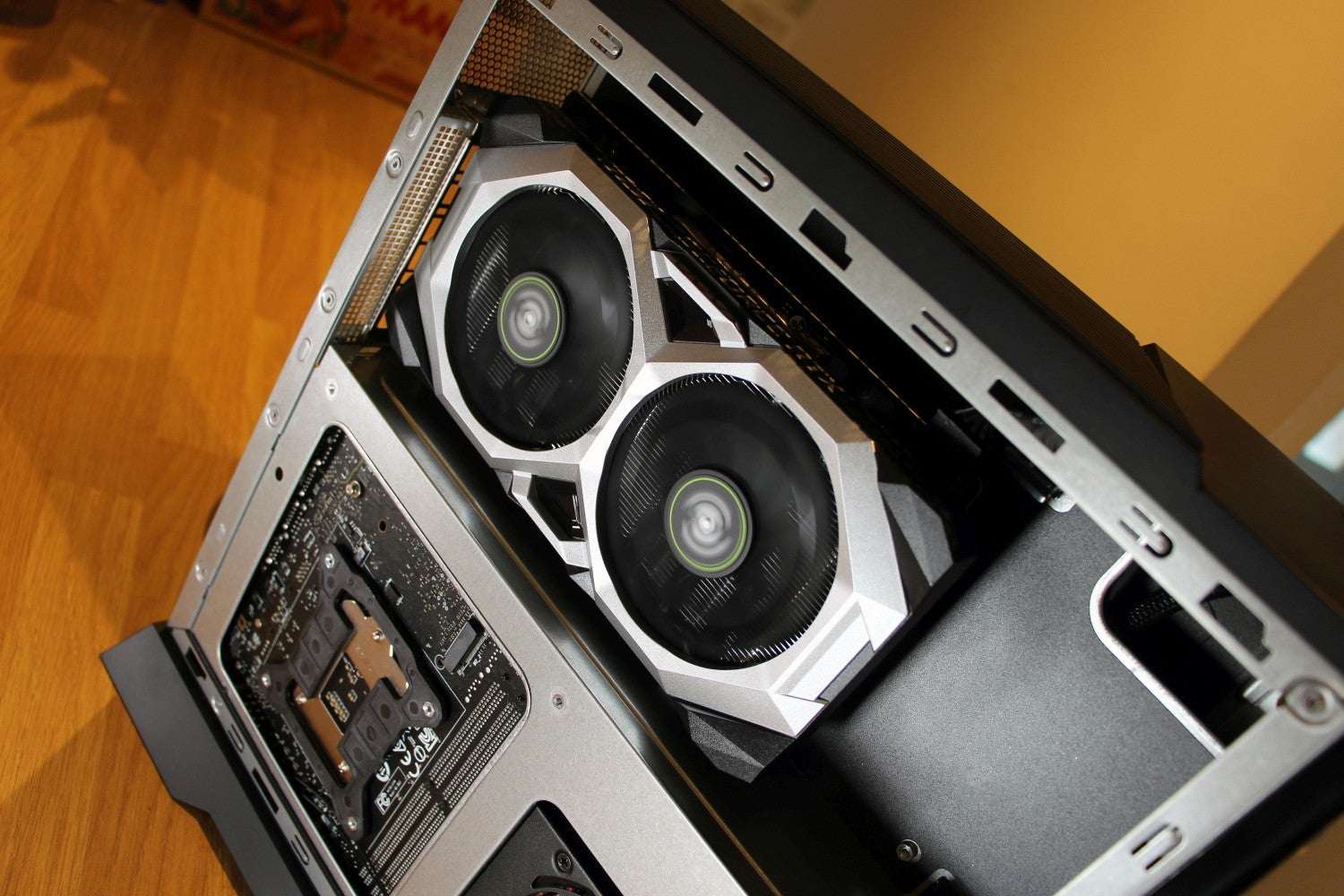 They’re decent prices, but potential buyers should be aware of the rest of the market. In the UK and the US, if you take the Trident A’s price and spend it on a conventional desktop, you’ll get RTX 2060 Super graphics cards – and, on occasion, faster memory and better CPUs.

If you want a conventional RTX 2060 GPU, then you could knock a hundred quid or a couple of hundred dollars off the Trident A’s prices to find that card inside more conventional systems.

Of course, those conventional PCs will be larger and heavier, but this isn’t necessarily a bad thing – those PCs will also have greater upgrade room. It’s worth thinking about your priorities: are you more concerned with performance or future growth, or having a compact PC?

The Nvidia RTX 2060 is the MSI’s star component, and it has a good specification for 1080p and 1440p gaming. It uses the latest Nvidia Turing architecture, 1920 stream processors and 30 RT cores for ray-tracing. It comes with 6GB of memory.

It’s solid, but it’s been superseded. The RTX 2060 Super upgraded the same core by adding 256 stream processors, four RT cores and an extra 2GB of memory.

Nevertheless, the RTX 2060 remains a good option for 1080p and 1440p gaming. Its 58fps result in Ghost Recon: Wildlands is excellent, and the RTX 2060 was significantly faster in Middle-earth: Shadow of Mordor and Shadow of the Tomb Raider. Those scores were also bolstered by solid minimum frame rates.

Those 1080p results mean that the Trident will play any current single-player game at this resolution and at Very High settings. There’s also sufficient power to handle eSports games at beyond 100fps – so those competitive games can run at frame rates ideal for super-smooth high refresh rate screens. 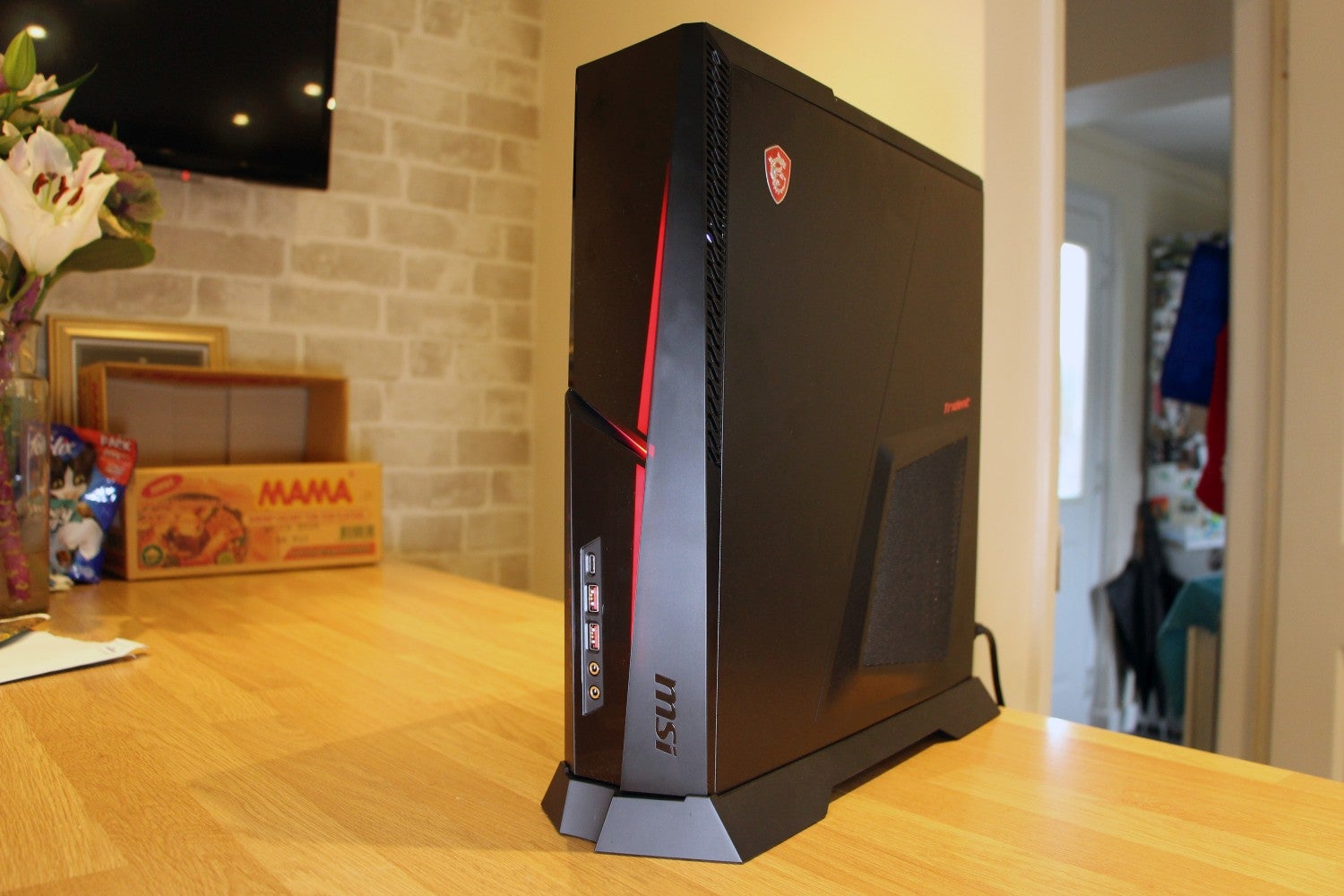 The RTX 2060 delivered 1440p averages that ran between 46fps and 101fps, so single-player and eSports titles will also run here. This system can also handle ray-traced titles.

The MSI’s graphics card is a decent single-screen chip right now, and it provides headroom for a few years, too. It won’t handle 4K playback or VR headsets, though, and it will struggle with widescreens.

However, be aware of the RTX 2060 Super because that GPU can be found in PCs at the same price as the Trident A, and it’s more powerful.

That uplift won’t suddenly turn the RTX 2060 Super into a 4K gaming card, but it will provide more ability now and good future headroom too. If you’re more concerned with graphical grunt than having a small PC, it’s worth considering.

The Core i5-9400F is a mid-range processor with a solid specification. It features six cores, a base speed of 2.9GHz and a Turbo peak of 4.1GHz.

It doesn’t have Hyper-Threading, but that isn’t a big deal: six cores and those clock speeds mean you won’t have any gaming bottlenecks. 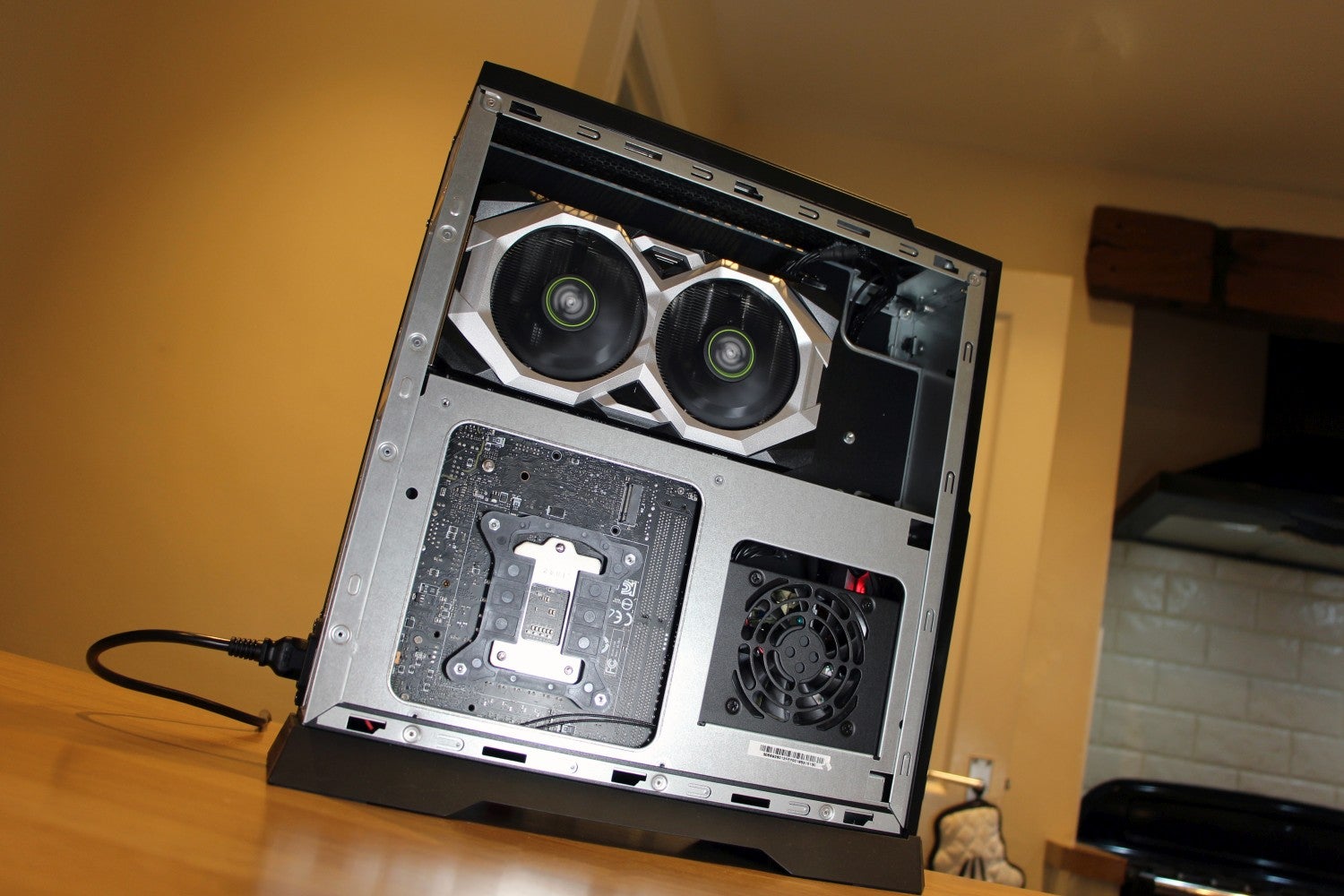 Its single- and multi-core Geekbench results of 4809 and 18,750 are solid, indicating this machine will demonstrate little problem with day-to-day work and web-browsing. Photo-editing won’t be an issue, either.

However, US buyers certainly get the better deal, because the Core i7-9700F in that PC is around 5000 points quicker thanks to its extra two cores. If tough work is a priority for you, that’s a better option.

Elsewhere, the Trident A serves up 16GB of RAM memory, which is ample. The SSD is decent, with read and write speeds of 3552MB/s and 1530MB/s. That’s competitive pace, and enough to ensure that games load quickly and that boot-times are rapid.

The specification is rounded out by Gigabit Ethernet, Bluetooth 5.0 and dual-band 802.11ac wireless – but there’s no sign of Wi-Fi 6 here yet.

The MSI is an impressive thermal performer. Its internal temperatures are never an issue, and when it’s idling or running less-intensive tasks the Trident is barely audible.

There’s greater fan noise during gaming, but the noise levels remain at a level that would be easy to mask with speakers or a headset, and quieter than most full-size gaming machines. It’s certainly conceivable that the Trident could be at home in the living room – it’s barely louder than a PS4 Pro or an Xbox One.

Should I buy the MSI Trident A?

The MSI Trident A is one of the best small-form-factor gaming PCs on the market. It’s cleverly designed for easier internal access and cool, quiet operation; it looks good, and is half the size of conventional PCs, so it’s easier to accommodate and better for travel.

There’s enough pace here to easily handle 1080p and 1440p gaming. The rest of the specification is solid, and US buyers get the added bonus of a Core i7 processor.

Smaller systems usually involve a degree of compromise, though, and the MSI is no different. There’s less upgrade room than in a conventional system. Spending this cash on a run-of-the-mill ATX PC could net you a faster RTX 2060 Super graphics card – or you could save money on a cheaper RTX 2060 PC.

If you’re not fussed about that bit more power gain, saving a bit of cash, or getting inside your system, then that won’t be a concern. If your main aim is to find a small, effective system for 1080p and 1440p gaming, then the MSI Trident A should be at the top of your list.